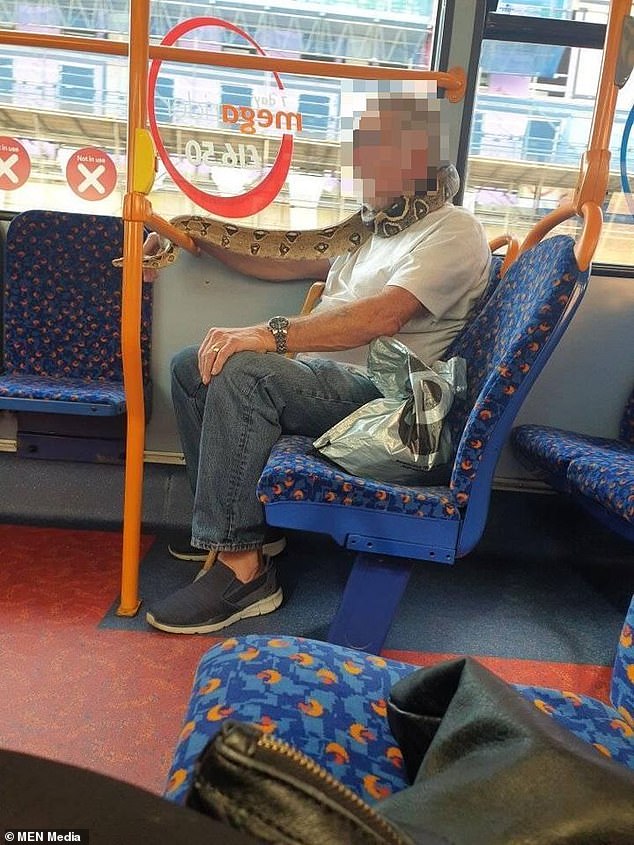 Authorities have pulled a hissy fit after denouncing a man spotted wearing a huge snake instead of a face mask while riding a bus in Salford yesterday.

The man used the large reptile, which hung around his neck, as a face covering while boarding the Swinton to Manchester service at Salford precinct.

Shocked passengers stared in astonishment as the man – clearly making fun of coronavirus restrictions including the compulsory wearing of coverings on public transport in England – removed the snake from around his neck.

The reptile then wrapped itself around the hand rails as fellow bus riders described the surreal scene as ‘definitely entertaining’.

One passenger, who asked not to be named, said she initially thought the man was wearing a ‘funky mask’ before she spotted it slithering over the hand rails.

She said she found the incident ‘really funny’ and that the animal did not seem to be bothering any of her fellow pas-sengers, telling PA: ‘No-one batted a eyelid.’

The public stunt was swiftly condemned by local authorities today as they insisted that snakes are not replacements for face coverings. Photos confirm the man was not wearing a mask under the large snake. 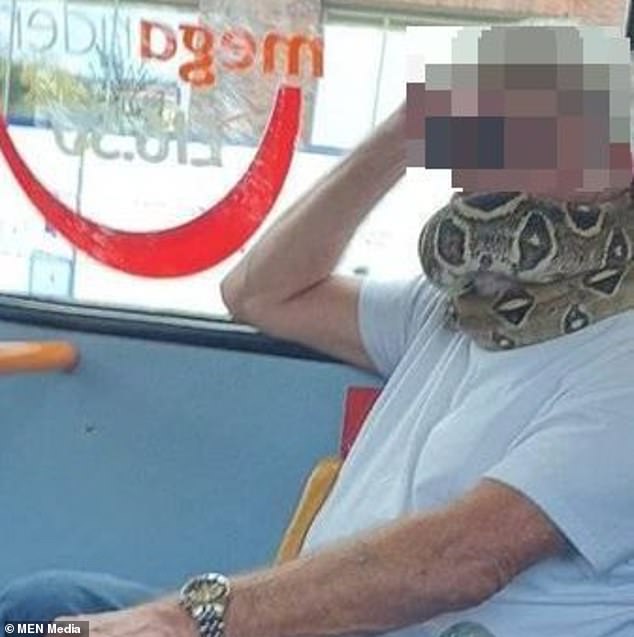 The man used the large reptile, which hung around his neck, as a face covering while boarding the Swinton to Manchester service at Salford precinct

Using a face covering on public transport is currently mandatory, except for those who are exempt for reasons of age, health or disability.

A Transport for Greater Manchester spokesman said: ‘Government guidance clearly states that this needn’t be a surgical mask, and that passengers can make their own or wear something suitable, such as a scarf or bandana. While there is a small degree of interpretation that can be applied to this, we do not believe it extends to the use of snakeskin – especially when still attached to the snake.’

A 46-year-old woman told the Manchester Evening News: ‘He had it wrapped around his face like a mask getting on the bus.

‘At first I thought he had a really funky mask on, then he let it crawl around the hand rails. No one was really bothered on the bus but a man behind took a video.

‘It was definitely entertaining.’

While some people are stretching the definition of ‘face covering’ to include reptilian creatures, others are being attacked for banning face masks in shops.

Michael Schneider, 57, is being investigated by police for putting up a sign banning customers from wearing coverings inside his vintage tearoom in Chichester.

The shopkeeper has also admitted that he will penalise mask-wearers by charging them if they put on a face mask ‘of their own volition’.

A red doormat with white footprints also instructs customers to ‘stand here until you realise your Government is brainwashing you (You May Be Here Sometime)’.

Mr Schneider alleges that the British public are ‘consenting to Government control’ by following Boris Johnson’s coronavirus restrictions, including the new draconian Rule of Six which came into force in England yesterday. 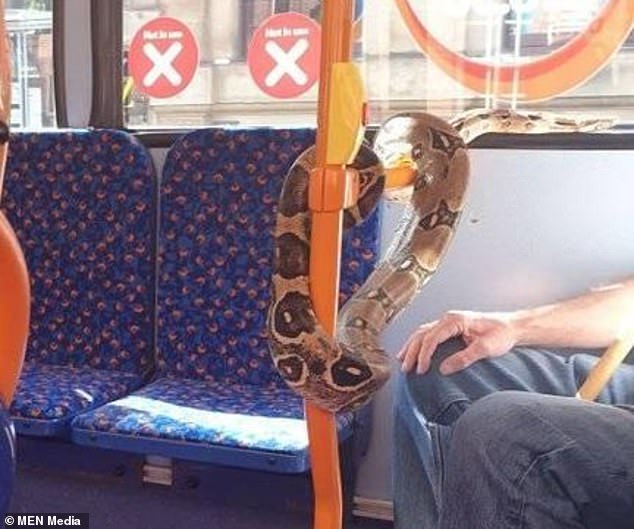 Shocked passengers stared in astonishment as the man removed the snake from around his neck. The reptile then wrapped itself around the hand rails

Police are now investigating shopkeeper Mr Schneider after Chichester District Council was inundated with complaints about his sign.

Mr Schneider claims council officers has ‘threatened to shut down his shop’ if he does not take the sign down – though the Council denies making such threats.

Speaking to Metro, Mr Schneider said: ‘What’s happening now, where you can’t get more than six people in one place without having the police on you, that violates Article 20 of the Universal Declaration of Human Rights.

‘I’ve had the police around, I’ve had the Council round twice and they all want me to take my poster down and I’m not going to do it because it’s the truth.’