Shares in First Group revved up as the struggling bus and rail firm said it expects to make a small profit for the first half of the year.

The company, which racked up a £300million loss in the year to the end of March, said revenues from bus services bounced back faster than expected.

But its trains have been largely empty as the push to get white collar workers back to the office failed to gain traction.

On track: Bus and Train operator First Group said revenues from bus services bounced back faster than expected. But its trains have been largely empty

The Aberdeen-based firm said passenger volumes on its rail services, which include South Western Railway and the Transpennine Express, have ‘increased modestly during the summer’ but are still at around 30 per cent of pre-pandemic levels on average.

The news that a small profit is imminent came just two months after warning it might not survive the Covid crisis, sending shares 3.4 per cent higher, up 1.38p, to 42.28p.

But the positive update failed to prevent a backlash from investors who used the firm’s annual general meeting to express their disapproval at the way the company has been run. 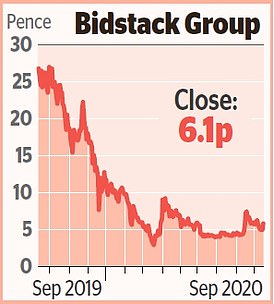 Bidstack Group clinched an exclusive deal with a major video games studio to embed advertising in a popular game, Hyper Scape, which was released in August.

Under the deal with Ubisoft, Bidstack will put adverts into the PC, Xbox and Playstation versions of Hyper Scape.

Its speciality is to insert adverts in games in places where you would find them in the real world, such as billboards or, in racing games, at the track.

Just under 30 per cent of votes cast rejected the re-election of chief executive Matthew Gregory, while almost a fifth voted against fellow board directors Steve Gunning, Martha Poulter and David Robbie.

The backlash has been spearheaded by an activist investor, US hedge fund Coast Capital, which owns more than 10 per cent of First Group and is the company’s biggest shareholder.

Coast’s chief investment officer James Rasteh believes its two north American businesses, which include America’s distinctive yellow school buses and Greyhound coaches, would be worth much more than they are now if they were to be listed separately on the New York Stock Exchange.

First Group stressed it is ‘resolutely focused’ on selling the North American business and ‘is encouraged by significant interest from potential buyers’.

The FTSE 100 made gains following a glum start to the week, rising 1.32 per cent, or 79.29 points, to 6105.54, as mining companies were boosted by data showing China’s industrial output accelerated the most in eight months in August.

Miners often see their shares rise when upbeat data comes out about China’s economy because it is the world’s largest consumer of raw materials.

William Hill was a winner with traders after its bet on the US market paid off once again, with its US partner doing a deal with American sports broadcaster ESPN.

But G4S, which is on the receiving end of a £3billion hostile takeover approach from Canada’s Garda World, edged into the red as the two traded more blows.

In a long and detailed statement, G4S insisted things are on the up, especially because it intends to sell more parts of the business, and that the offer is an opportunistic, under priced bid.

Garda slammed this as ‘desperately disappointing stuff’ – though G4S shareholder Harris Associates waded it, saying that it values G4S ‘significantly higher’. G4S fell 0.8 per cent, or 1.5p, to 181p.

Shares in beleaguered cruise operator Carnival sunk further after it said it is planning to tap investors for another £775million and expects third-quarter profits to fall by £2.3billion. It closed down 6.1 per cent, or 67.5p, at 1034.5p.