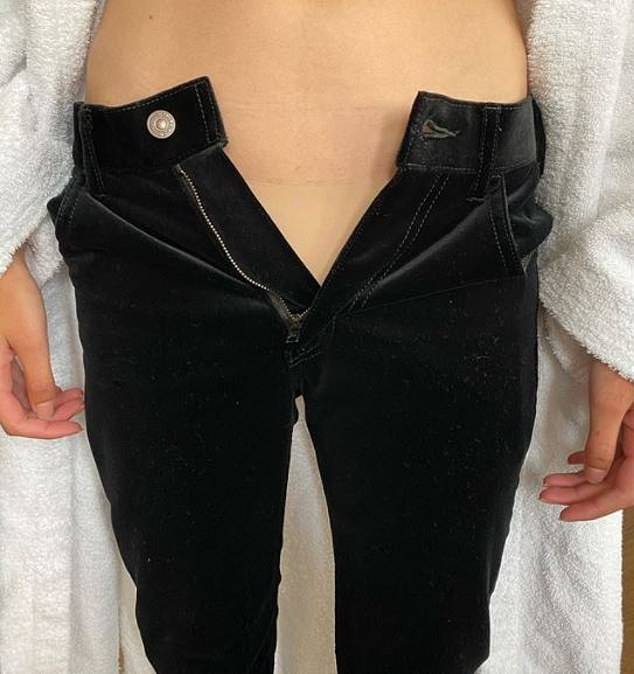 A stylist has suggested the fashion industry needs to be more inclusive after a model on set struggled to fit into sample sized designer trousers.

Fran Burns, from London, took to Instagram to call for sample sizes, which are worn by models and typically range from a UK size 4-8, to made bigger after admitting she felt like a ‘twisted creep’ trying to help a model into the trousers.

The stylist, who has previously worked as as fashion editor at i-D and British Vogue, posted an image of a ‘tiny’ woman, who she estimated was ‘a size 8 at most’, struggling to fit into a pair of sample size trousers from luxury brand Celine.

Stylist Fran Burns took to Instagram to call for sample sizes, typically UK size 4-8, to made bigger after several models struggled to fit into clothes from the new luxury brand Celine. She posted a picture of one of the ‘tiny’ models who could not fit into a pair of trousers 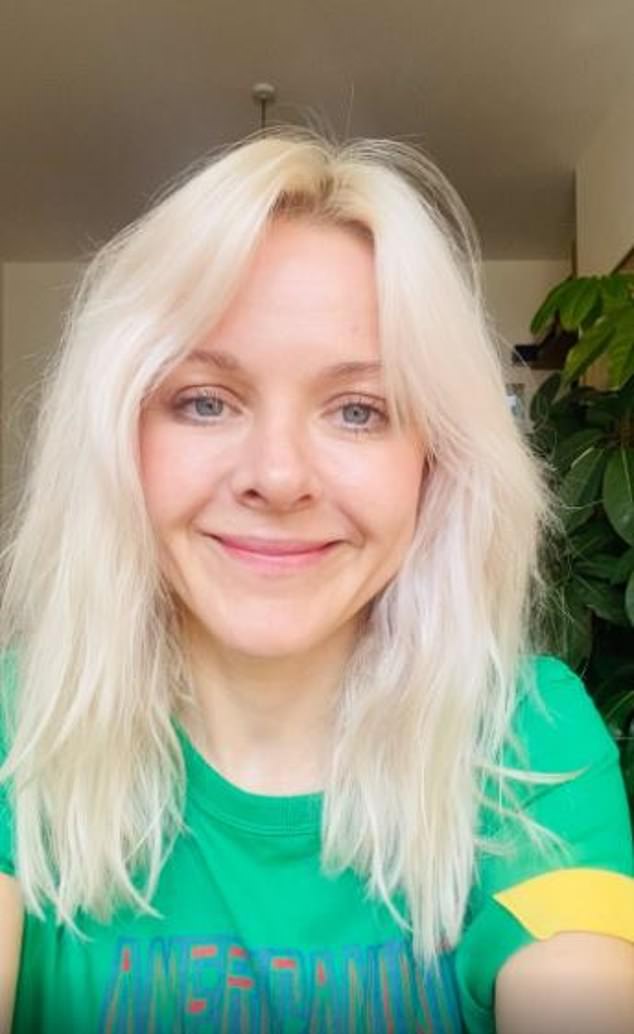 The fashion editor, pictured, said the fashion industry needed to be more inclusive instead of making people feel ‘too big’ for clothes and suggested the fashion brands were the exception, not the women who do not fit into their clothing

She said: ‘More often than not I am working with young women who – in spite of being exceptionally beautiful – are living, breathing, feeling human beings who should never be made to feel like they are “too big” for the clothes.’

After finding several looks from the Celine collection did not fit the models on her shoot, she decided to take to social media to stress that the fashion industry needs to change.

She said: ‘I had several looks from this collection and none of them fit her.

‘She was not the exception – you [Celine] are. This is so unacceptable – it is fundamentally wrong to suggest that this is the norm. It isn’t.’

The fashion editor added: ‘We have a responsibility in this industry to celebrate and to empower and to make people feel great. 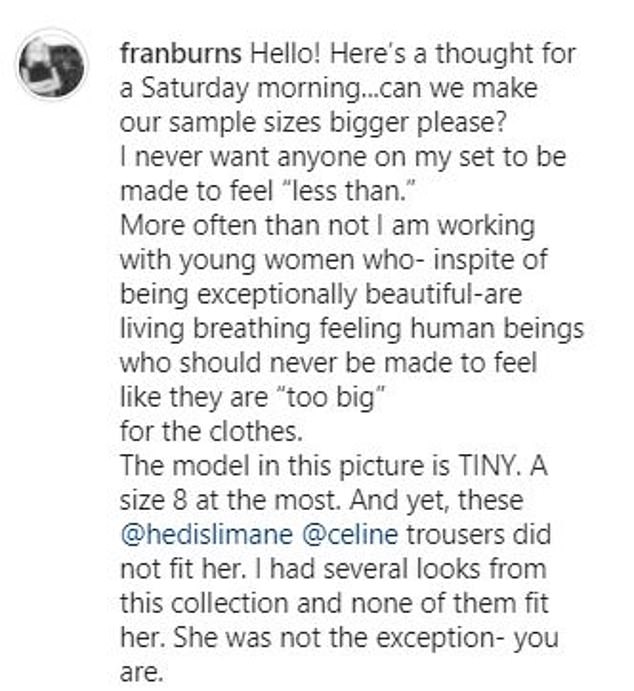 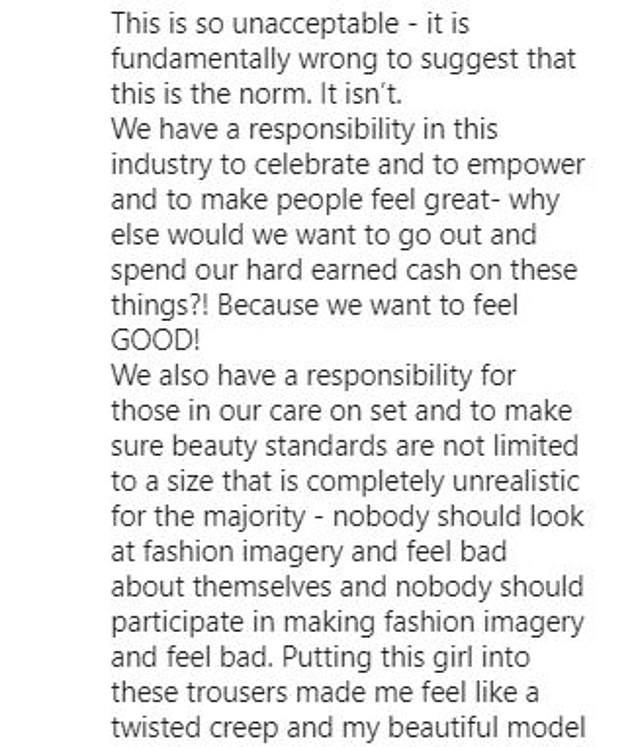 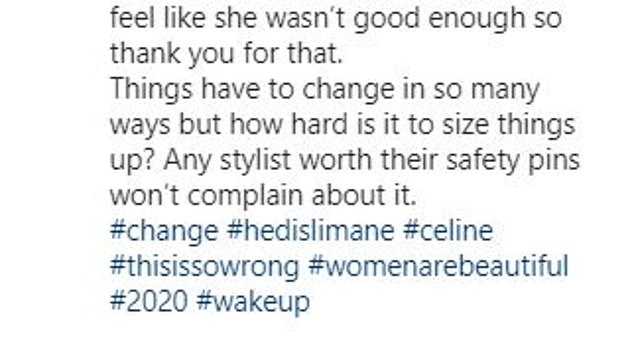 In her post she said she felt like a ‘twisted creep’ trying to get one of the models to fit into the trousers which were too small for her. Pictured: Fran’s post on Instagram

‘Why else would we want to go out and spend our hard earned cash on these things?! Because we want to feel GOOD!’

As someone working in the fashion industry, she said she, and everyone else who works in the same field, as a responsibility to care for people on set at shoots.

In addition, she suggested they had a responsibility to make sure beauty standards are not defined by a dress size, which she described as ‘completely unrealistic for the majority’.

‘Putting this girl into these trousers made me feel like a twisted creep and my beautiful model feel like she wasn’t good enough so thank you for that.

‘Things have to change in so many ways but how hard is it to size things up? Any stylist worth their safety pins won’t complain about it.’

Her post received an overwhelming response from like-minded people who praised her for speaking out against the industry. 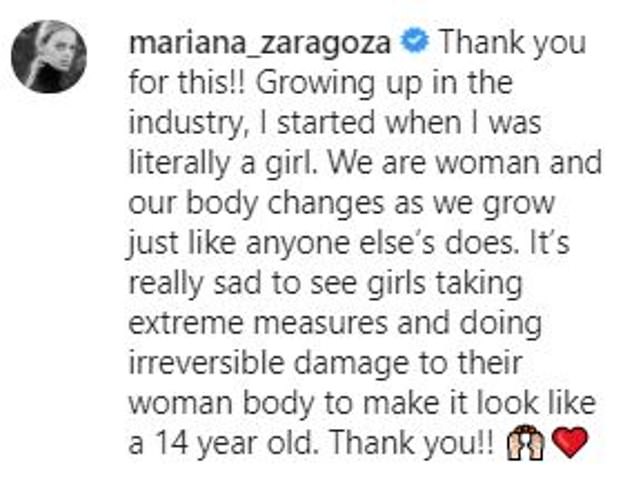 Her impassioned speech on Instagram garnered an enormous response from other people in the fashion industry, from magazine editors to other models who have been subject to the beauty standards she spoke openly about

The sentiment was also echoed by others in the industry, including model Karen Elson – who has spoken out previously about her battles with her weight and eating disorders at the height of fame.

Joining in Fran’s fight against sample size clothing, the 41 year old told her 178,000 followers to check out Fran’s ‘eloquent and powerful’ post.

She wrote on her Instagram: ‘It is no secret within fashion that body dysmorphia and eating disorders are rife and in fact normalized in our industry. 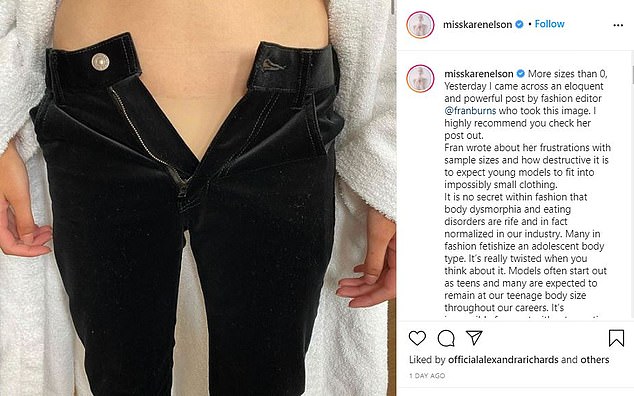 Model Karen Elson, who has previously spoken out about her own experiences with eating disorders sparked by the pressure from the fashion industry, praised Fran for her ‘eloquent and powerful’ post and encouraged her followers to go read it 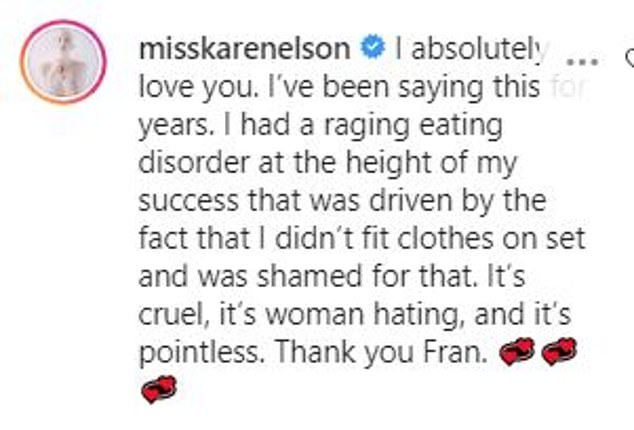 Before posting on her own profile, Karen took to the comments on Fran’s post too to thank the editor for speaking out against the industry and expressed her disgust at people feeling ashamed of their body shape

‘Many in fashion fetishize an adolescent body type. It’s really twisted when you think about it.

‘Models often start out as teens and many are expected to remain at our teenage body size throughout our careers.

It’s impossible for most without resorting to extreme measures.’

The model continued: ‘I think it’s time to open this zero 0 Pandora’s box with compassion and honesty.’