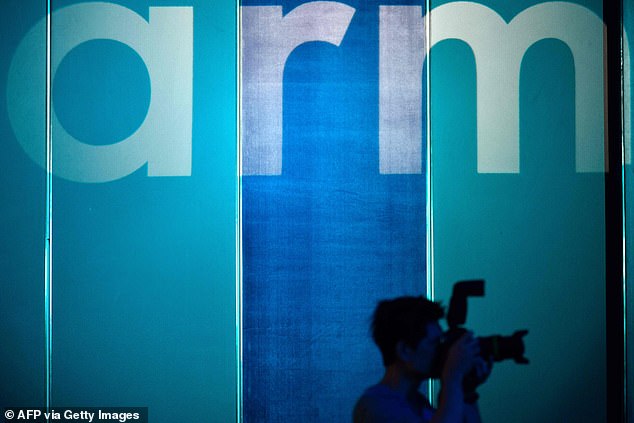 China has emerged as a potential opponent to the American takeover of British chip maker Arm.

The Global Times newspaper – seen as a mouthpiece for Beijing’s Communist regime – said Nvidia’s £30billion purchase of the firm from Softbank was ‘disturbing’ and urged regulators to treat it with caution.

It claimed that Arm could be ‘politicised as a technology weapon’ in the US-China trade war, leaving Chinese firms such as telecoms giant Huawei blocked from buying its chips.

Chip deal: The Global Times newspaper – seen as a mouthpiece for China’s Communist regime – said Nvidia’s purchase of Arm was ‘disturbing’ and urged regulators to treat it with caution

And Zhu Jing, the vice-chairman of Chinese industry body the Beijing Semiconductor Association, said: ‘If Arm is acquired by a US company, everyone will be worried.’

The comments are significant because the deal needs approval from Chinese regulators, among others, before it can go ahead.

How us firm cut jobs

The American giant swooping on Arm previously laid off hundreds of staff at another British company.

Four years later Nvidia shuttered the firm and laid off 500 staff, in a strategy overhaul to focus on areas such as gaming, automotive vehicles and cloud computing. It later blamed alleged anti-competitive practices from rival Qualcomm.

Nvidia’s rivals, including Qualcomm, say its Arm takeover may put it in an overly dominant position itself.

They come after British MPs, trade unionists and Arm’s co-founders raised concerns about the takeover, with critics claiming it could threaten jobs and give US firm Nvidia a too-dominant position in the microchip industry.

Cambridge-based Arm’s chip designs are used by 70 per cent of the world’s population, powering everything from smartphones to computers and games consoles.

Nvidia insists Arm will remain in the UK, jobs will be protected and it will maintain its ‘neutral’ approach to selling technology around the world.

The Global Times said: ‘If Arm falls into US hands, Chinese companies would be placed at a big disadvantage.

‘Not just Huawei, all could be cut off from Arm-based chips.’

It said Huawei – already hit by US sanctions over links to Beijing – could be barred from buying Arm chips if the deal is done.