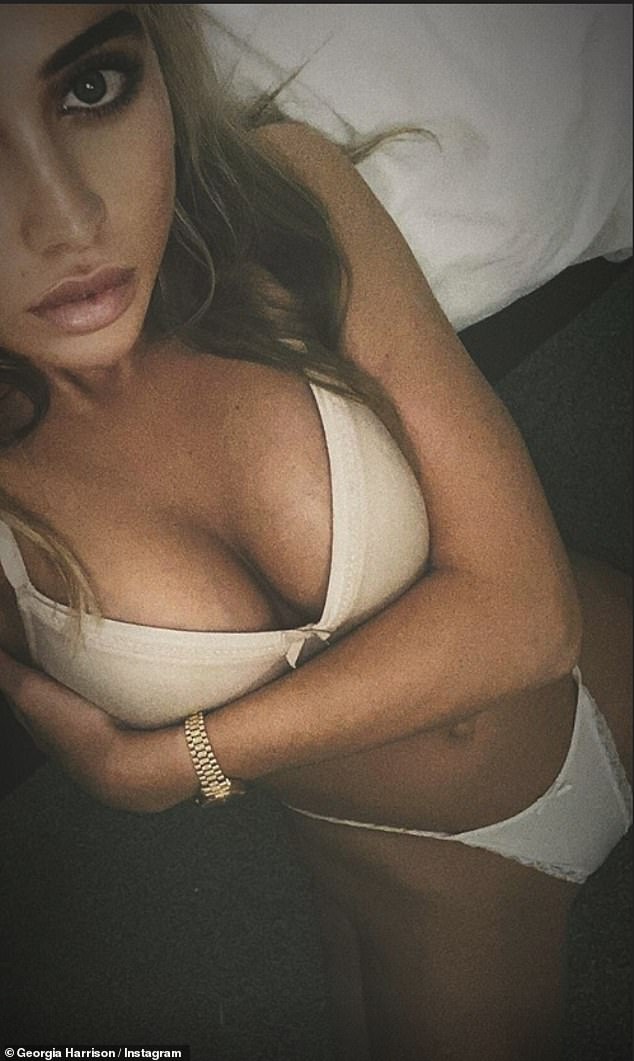 Georgia Harrison has unveiled the results of her boob job.

The Love Island star, 25, took to Instagram on Tuesday to share a slew of busty lingerie snaps after going under the knife to boost her cup size from 32B to a 32C.

Georgia revealed she already feels ‘so much more confident’ with her new boobs, and said she had the operation after her 3.5stone weight loss left her with sagging skin and stretch marks.

Eye-popping cleavage: Georgia Harrison has unveiled the results of her boob job

The television personality told Closer Magazine: ‘I’d see myself on TV wearing swimwear and think, “Oh, my boobs don’t look good”, and it made me feel very self-conscious.’

Georgia went on to say she would limit what she would, only opting for padded tops or tops with high necklines.

Explaining why she had surgery, the reality star said: ‘I’m around 8.5st now, but when I was about 19 I was nearer 12st and my boobs were a lot bigger, I was working abroad and had a really unhealthy lifestyle, and I’d drink and just eat junk.’ 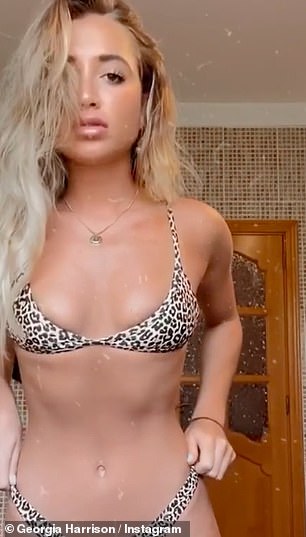 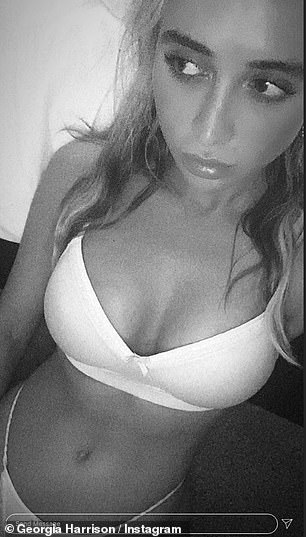 Surgery: The Love Island star, 25, took to Instagram on Tuesday to share a slew of busty lingerie snaps after boosting her cup size from 32B (pictured before) to a 32C (after) 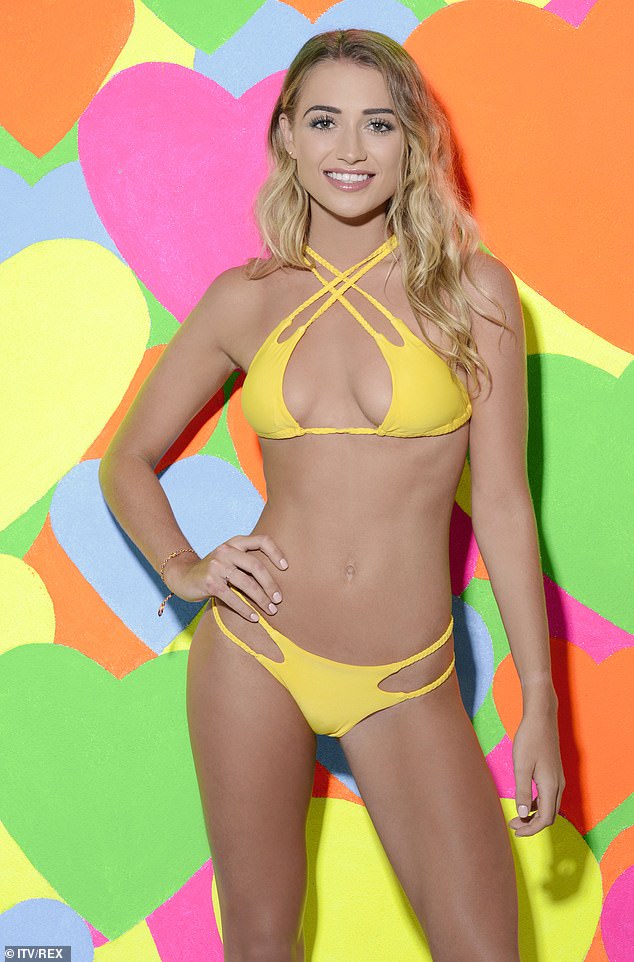 Unconfident: She said: ‘I’d see myself on TV wearing swimwear and think, “Oh, my boobs don’t look good”, and it made me feel very self-conscious’ (pictured in 2017) 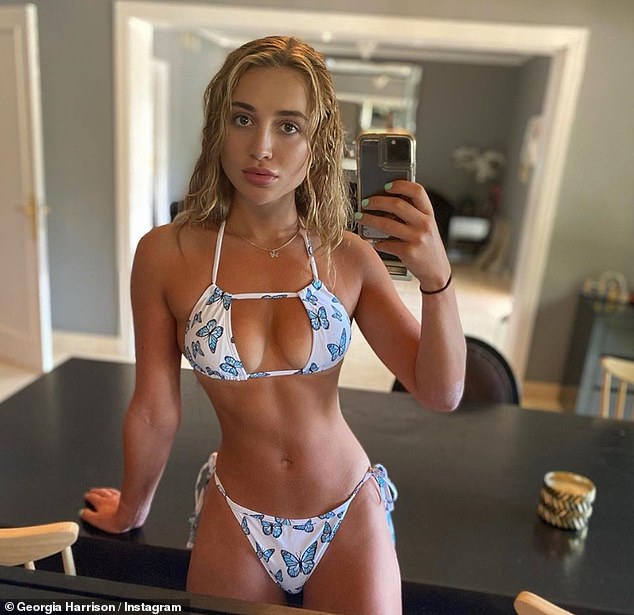 Under the knife: Georgia said she wanted the boob job after her breasts were left saggy following her 3.5 stone weight loss (pictured this summer)

‘But when my weight dropped a bit, so did my boobs, it looked like there was space to fill. I also had a problem with inverted nipples that I wanted to fix.’

And Georgia certainly appeared delighted with the bigger breasts as she showed them off on Instagram.

The blonde beauty put on a sizzling display in cream lingerie and a matching thong. 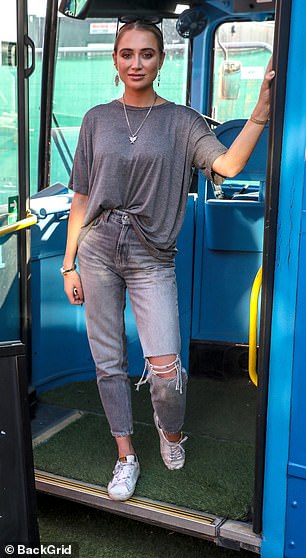 Impressive: Later in the day, Georgia volunteered with Charity Buses4Homeless in London 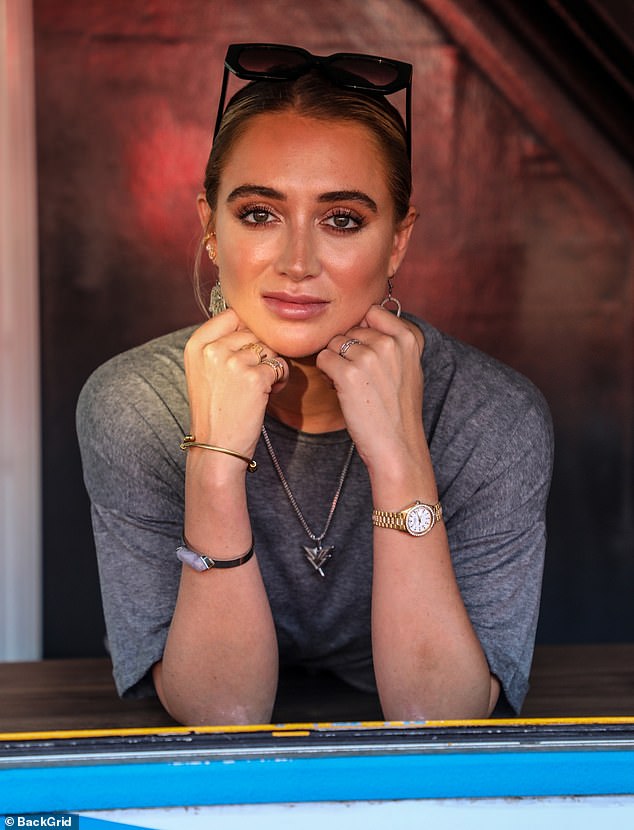 Casual: The TV star dressed down in a grey T-shirt and gold accessories for her appearance 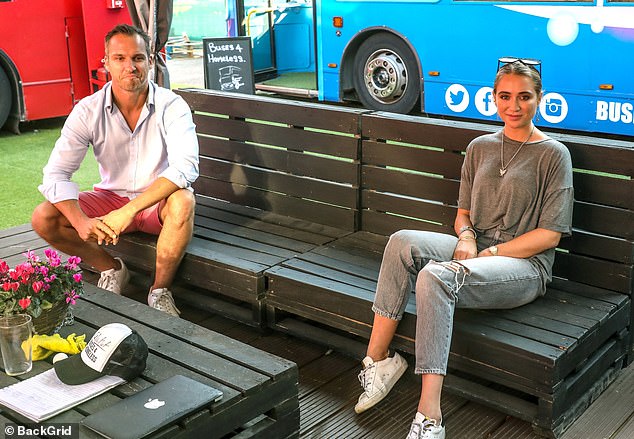 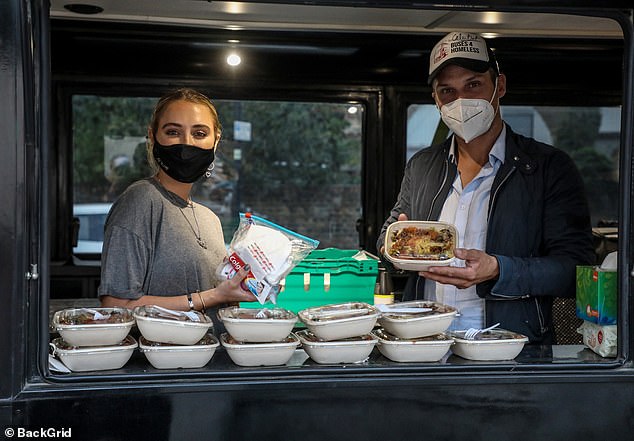 Aid: The media personality provided meals and care packages from a food van Chatty: Sporting a face mask, she beamed as she engaged in a lively conversation with a man

Georgia first found fame with a brief stint on The Only Way Is Essex in 2014, before becoming a household name with an appearance on 2017’s Love Island.

The bubbly reality star then gained an American fanbase when she starred in series 33 of The Challenge in 2018, reaching the final and finishing in eighth place.

The Challenge saw reality stars from around the world come together to compete in a series of physical and mental challenges in the hope of the scooping prize money.

During her time on the show she was involved in a tumultuous relationship with fellow Brit and Ex On The Beach star Stephen Bear, a storyline that dominated much of the series.

A year later, Georgia’s quest for love continued as she signed up to Celebrity Ex On The Beach.