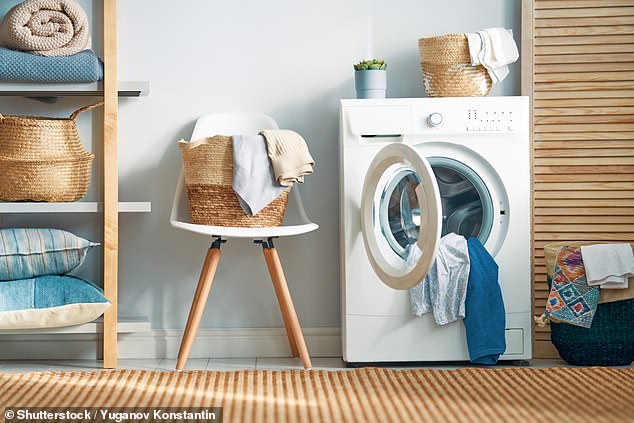 Microplastic pollution is not just damaging the oceans: Washing clothes releases 175,000 TONS of synthetic fibres on to land every year, study finds

Washing clothes pollutes the land with around 175,000 tons of synthetic fibres each year — on top of the microplastic pollution that enters the seas — a study has found.

The findings from US-based researchers could help find effective solutions to stop the spread of synthetic fibres, while expanding our understanding of their impact.

Less than five millimetres in length, microfibers are produced across every step of the garment fabrication process — and released when clothes are machine washed.

Washing clothes pollutes the land with around 175,000 tons of synthetic fibres each year — on top of the microplastic pollution that enters the seas — a study has found

‘Large-scale removal of microfibers from the environment is unlikely to be technically feasible or economically viable, so the focus needs to be on emission prevention,’ said Jenna Gavigan of the University of California, Santa Barbara.

‘Since wastewater treatment plants don’t necessarily reduce emissions to the environment, our focus needs to be reducing emissions before they enter the wastewater stream.’

Synthetics fabrics — such as polyester and nylon — are the most commonly used fibres in the textile industry, accounting for over 60 per cent of the materials used to produce clothes worldwide.

Around 15 per cent of all plastic is used to make synthetic fibres, chiefly for clothing.

Fibre-filled water is filtered at wastewater treatment plants after clothing is mechanically washed.

Most of the plastic pellets are captured along with so-called biosolid sludge — which is often then spread over cropland or buried in landfill.

In their study, the researchers combined data on the global production, consumption and release of plastics with the amount of microfibers released when washing clothes by hand and with a machine.

They also examined how microfibers are handled at wastewater treatment plants and the fate of wastewater sludge.

‘Our calculations showed that approximately 5.6 million metric tons of synthetic microfibers were released from apparel washing between 1950 — the start of widespread use of synthetic fibres — and 2016,’ said Ms Gavigan.

Half of this figure, she added, was released ‘in the last 10 years.’

Nearly half the microfibers ended up on land, either on the surface — a total of 1.9 million tons — or in landfills, to the amount of 606,000 tons.

‘This paper isn’t the complete picture as the data are predicted rather than measured and authors had to estimate make assumptions where raw data weren’t available,’ commented expert Oliver Jones of RMIT.

‘Even if their results are an overestimate, they are still a cause for concern and something we really need to address sooner rather than later.’

The full findings of the study were published in the journal PLOS ONE.

URBAN FLOODING IS FLUSHING MICROPLASTICS INTO THE OCEANS FASTER THAN THOUGHT

Urban flooding is causing microplastics to be flushed into our oceans even faster than thought, according to scientists looking at pollution in rivers.

Waterways in Greater Manchester are now so heavily contaminated by microplastics that particles are found in every sample – including even the smallest streams.

This pollution is a major contributor to contamination in the oceans, researchers found as part of the first detailed catchment-wide study anywhere in the world.

This debris – including microbeads and microfibres – are toxic to ecosystems.

It has long been known they enter river systems from multiple sources including industrial effluent, storm water drains and domestic wastewater.

However, although around 90 per cent of microplastic contamination in the oceans is thought to originate from land, not much is known about their movements.

Most rivers examined had around 517,000 plastic particles per square metre, according to researchers from the University of Manchester who carried out the detailed study.

Following a period of major flooding, the researchers re-sampled at all of the sites.

They found levels of contamination had fallen at the majority of them, and the flooding had removed about 70 per cent of the microplastics stored on the river beds.

This demonstrates that flood events can transfer large quantities of microplastics from urban river to the oceans.