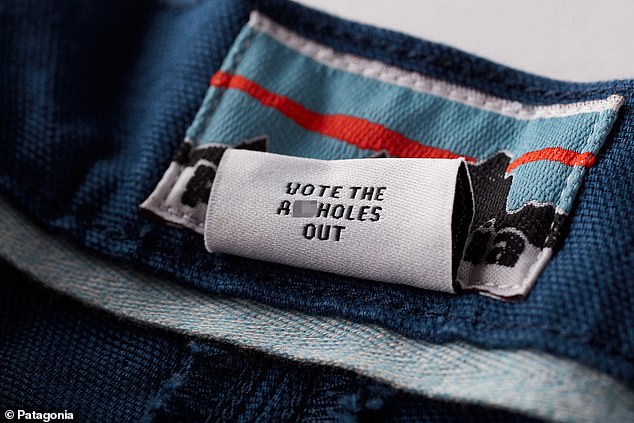 By Megan Sheets For Dailymail.com

Patagonia sparked controversy by hiding the phrase ‘Vote the a**holes out’ on a tag inside its latest line of shorts.

The outdoor clothing company’s crude call for customers to vote – seen by many as a not-so-subtle shot at President Donald Trump – went viral on social media over the weekend after it was spotted by eagle-eyed fans.

A spokesperson for Patagonia – which has long been engaged in environmental activism – confirmed that the political message was weaved into the tags on the waistband of its 2020 ‘Men’s and Women’s Road to Regenerative’ organic stand-up shorts.

‘We have been standing up to climate deniers for almost as long as we’ve been making those shorts,’ spokeswoman Tessa Byers said.

Byers said the phrase has been a favorite of Patagonia founder Yvon Chouinard for years, adding that it was not explicitly directed at Trump.

‘It refers to politicians from any party who deny or disregard the climate crisis and ignore science, not because they aren’t aware of it, but because their pockets are lined with money from oil and gas interests,’ she said. 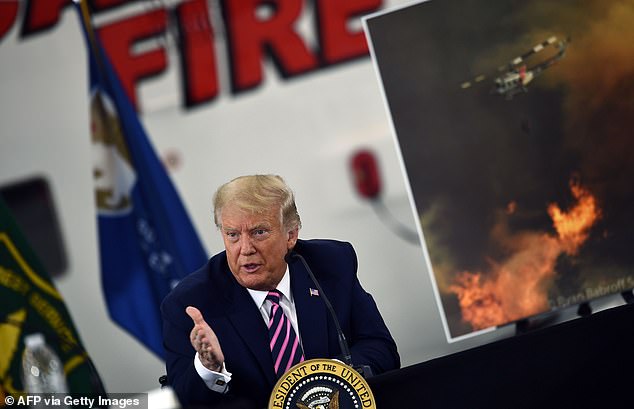 The California-based brand’s tag stunt came as the West Coast has been devastated by hundreds of wildfires that have burned millions of acres over the past month – prompting some politicians in affected states to ridicule Trump for denying that climate change is taking place.

The move was met with mixed reactions on Twitter as some users said they couldn’t wait to get their hands on Patagonia gear featuring the tag.

CNN reporter Ana Navarro tweeted: ‘@patagonia, can you please confirm if this is accurate. Cuz I’m about to go online and buy parkas in every color….and I live in Miami.’

Georgia state Sen Jen Jordan, a Democrat, chimed in: ‘As parts of our country are literally burning and being destroyed by the effects of climate change, this couldn’t be more welcome.

‘Way past time to listen to the experts and do something. Vote like your planet is on fire!’

Meanwhile other users panned the tags as a marketing ploy and vowed to boycott the brand.

‘I can’t wait for them to go bankrupt,’ one man wrote alongside the hashtag #Trump2020.

‘My husband has worn Patagonia since the early 80’s. He won’t be buying another thing from them. Civil discourse doesn’t exist anymore,’ another critic added. 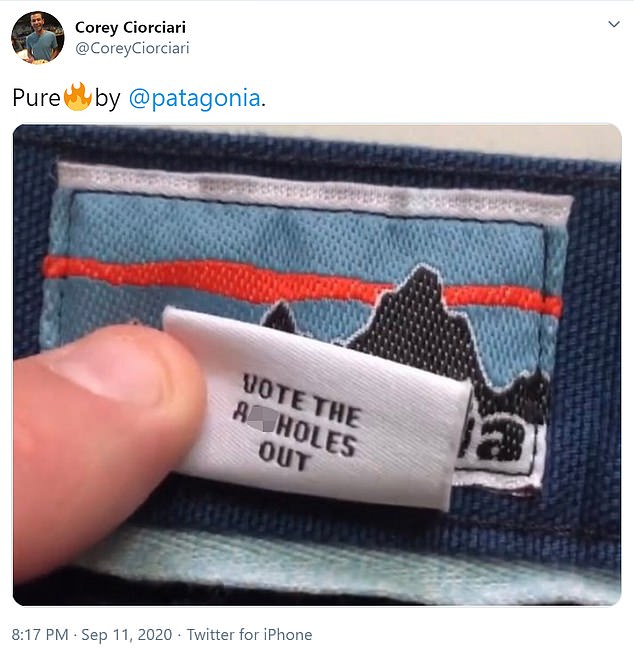 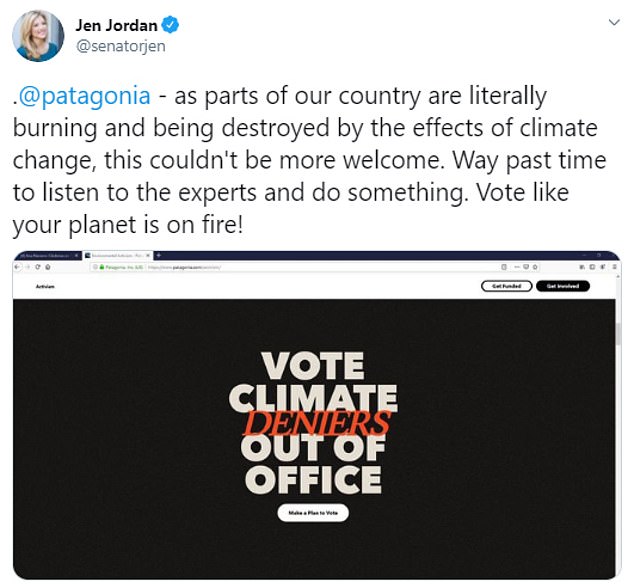 This isn’t the first time Patagonia has made headlines by wading into politics.

In 2017, the company sued President Trump after he moved to reduce the size of Utah’s Bears Ears and Grand Staircase-Escalante national monuments by two million acres.

And in 2018, Patagonia donated $10million it received in tax cuts to environmental programs that increase climate change awareness.

The company closed its headquarters headquarters, distribution center and stores nationwide on Election Day in 2016 and 2018 – and is planning to do the same this November.

Patagonia also recently teamed up with BallotReady to create its own election website where customers can enter their address and receive relevant information about how to request ballots and find polling places.

‘We need to elect climate leaders,’ the site states. ‘The 2020 US Senate races will have a significant, long-lasting impact on the strength of our nation’s climate policies and the existence of our wild places.’