They’ve been busy shooting scenes now the show is back for its 10th anniversary.

And Amber Turner, 27, looked sensational as she put on a busty display while sunbathing with her co-stars in Brentwood, Essex, on Wednesday.

The TOWIE star was joined by fellow cast members Courtney Green, 25, and Chloe Meadows, 27, for filming, with the beauties all opting for bikini tops to make the most of topping up their tans. 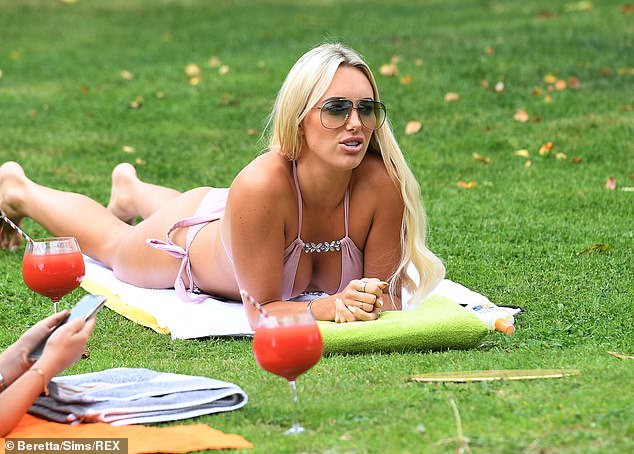 Looking good: Amber Turner, 27, put on a busty display as she sunbathed in a blush pink bikini during TOWIE filming in Brentwood, Essex, on Wednesday

Amber appeared to be in good spirits as she rested on her elbows while chatting away to her pals.

The blonde beauty wore her long locks down and donned a pretty blush pink bikini which tied at the sides and featured a sparkly detail on the top.

She accessorised her two-piece with a pair of oversized aviator sunglasses and a selection of stylish rings.

Meanwhile Courtney also ensured she was dressed up for the filming, wearing a pair of eye-catching orange and cream trousers. 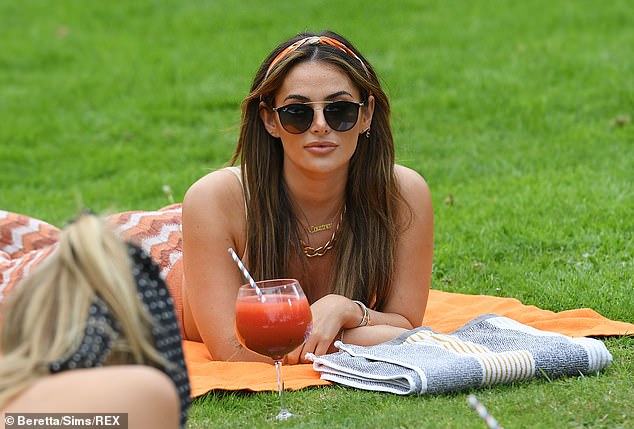 Glam: Courtney Green was also at the filming and looked chic in a pair of sunglasses and patterned trousers 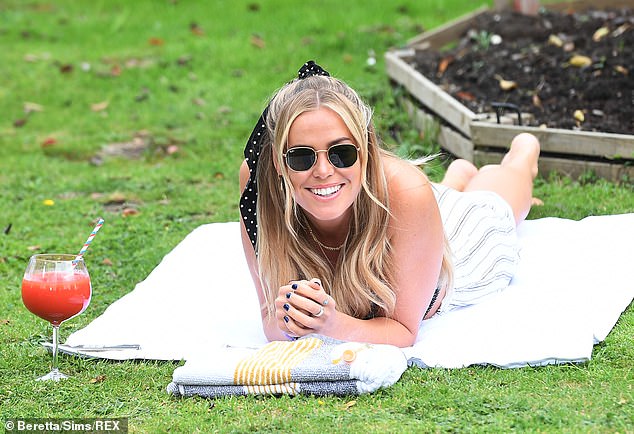 Stunning: Co-star Chloe Meadows also joined the two beauties to soak up the sun and enjoy a refreshing red drink

She flashed her washboard abs by donning a cream bikini top with the high-waisted bottoms and which flaunted her toned midriff.

Courtney continued her boho-style with a chic hair band and selection of gold jewellery including a chunky chain necklace.

The pair were also joined by co-star Chloe Meadows who let her tresses cascade over her shoulders after tying back the top section with a polka-dot hair tie. 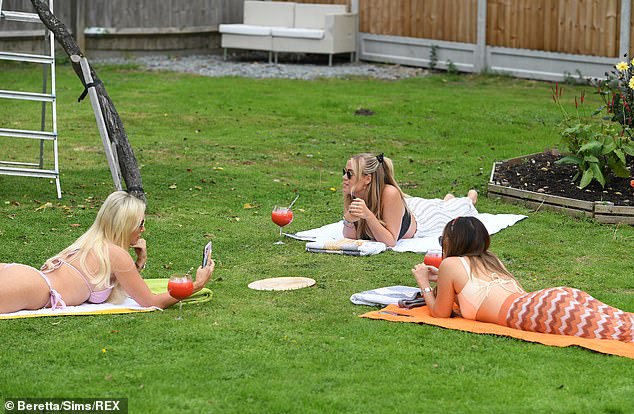 Pals: The girls spread their towels out in a circle as they chatted away and filmed for the new season

Style: Chloe flaunted her taut midriff in a pair of wide-leg trousers and a black bandeau top before completing her look with some comfortable white Crocs 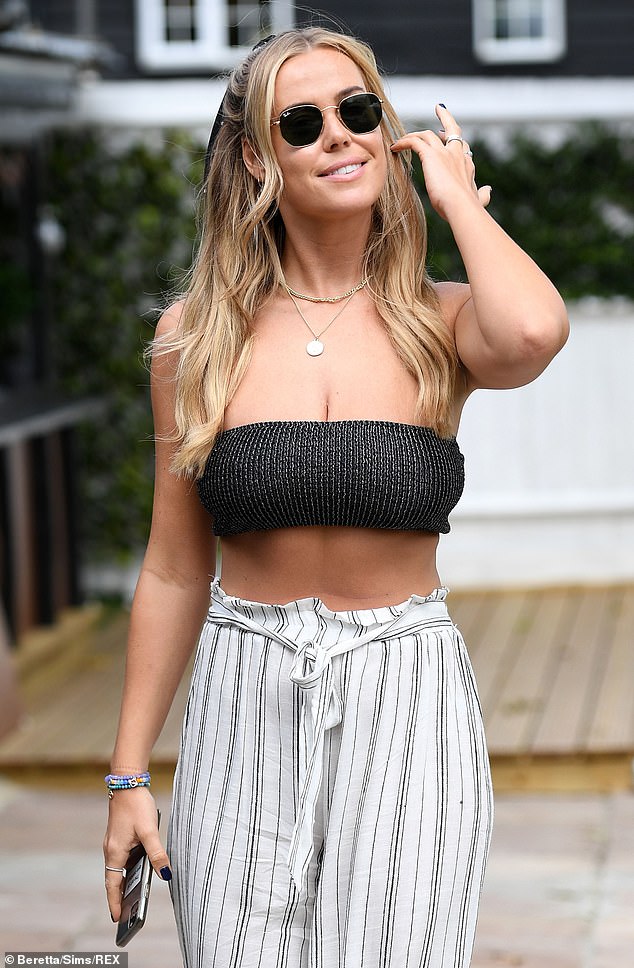 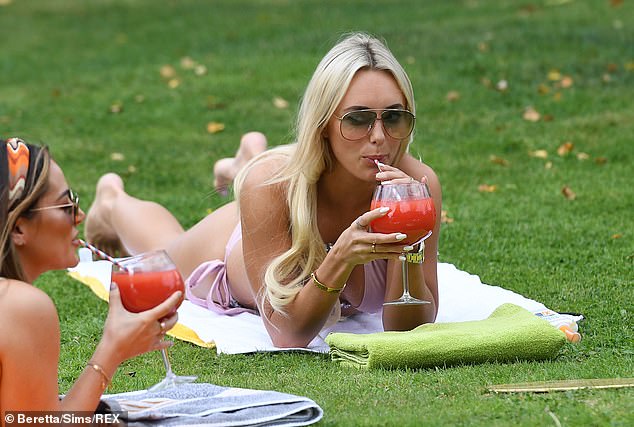 Sippin’ pretty: Amber and Courtney enjoyed their red drinks as they sunbathed in the garden

Chloe showed off her svelte figure in a pair of striped wide-leg trousers which she teamed with a black bandeau top.

She made sure she would be comfortable throughout the day filming by completing her look with some white Crocs shoes.

All three of the beauties were seen soaking up the sun in Brentwood and laying on their beach towels in the garden. 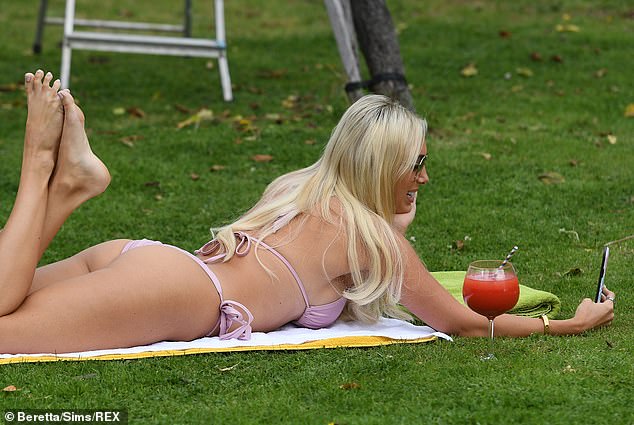 Strike a pose: Amber made sure to take a few selfies as she worked on her tan 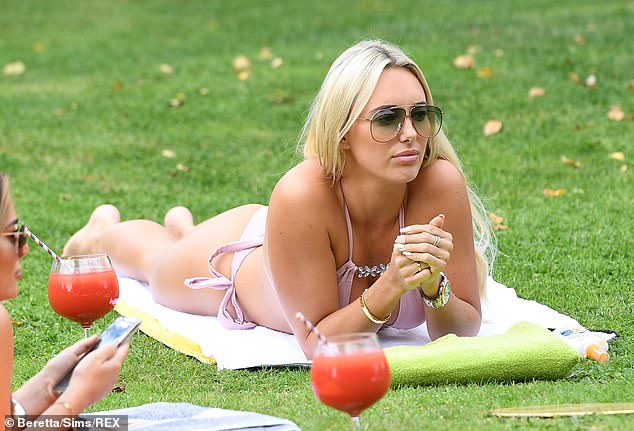 Listening: During the filming Amber paid attention to her co-stars stories 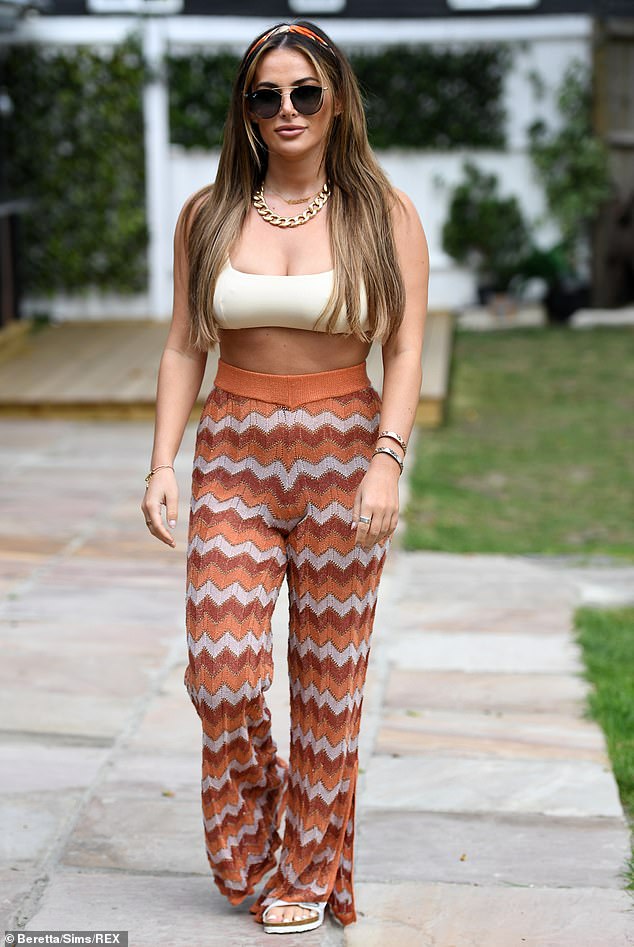 The girls made sure to space themselves out for the sunbathing session and enjoyed a delicious looking red drink in a huge cocktail glass.

The 10th anniversary series was due to start filming in March 2020, but ITV bosses made the tough decision to put the production on pause due to the coronavirus pandemic.

Fans were left without their Essex fix until the show came back with a vengeance on Sunday night, with former cast member Amy Childs returning.

So glam: The TOWIE stars posed up a storm as they arrived at the filming location

There will also be surprise appearances from some of the show’s other big stars from the past decade.

Paul Mortimer, Head of Digital Channels and Acquisitions for ITV, added: ‘After 10 years, TOWIE is still going strong and remains the number one show on ITVBe.

‘We’re thrilled to be welcoming back new and old faces for the upcoming mega-series as the show celebrates this special anniversary.’ 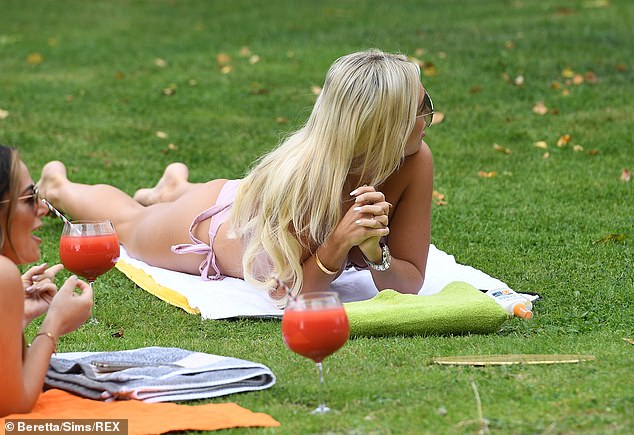 Relaxing: Amber wore her long blonde locks down and added a pair of aviator sunglasses