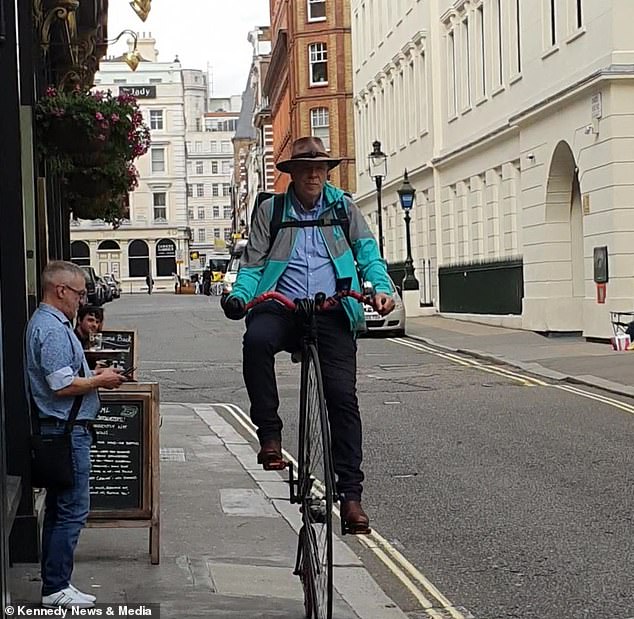 ‘I placed that order in 1892’: Bizarre moment Deliveroo driver rides a Victorian penny farthing down a London street

This is the bizarre moment a Deliveroo worker rides through central London on a penny farthing.

River Irvine, 25, had been standing outside work at Envy Barbers in Covent Garden when he spotted the delivery worker wearing the food company’s trademark turquoise jacket making a U-turn in the road.

The worker, sporting a wide brimmed hat, pedalled past Mr Irvine on the Victorian cycle with his seat and Deliveroo bag almost at his head height.

The clip has been met with an array of amused comments on social media, with one viewer saying: ‘Damn I’m hungry. I placed that order in 1892.’

Another remarked: ‘Social distancing taken to another level.’

During the clip, which was filmed on September 9, the Deliveroo worker makes a turn in the road and heads past Mr Irvine as he stands outside his place of work.

As the man rides the bicycle along the pavement, the barber shouts: ‘Oh yes, yes mate!’

Mr Irvine, from Wimbledon, said: ‘Living and working in central London, you do get used to seeing weird things but this is definitely up there with one of the strangest.

‘How often do you see a penny farthing nowadays, let alone one where the rider is wearing a bright turquoise Deliveroo jacket?

‘I just couldn’t help but wonder whose food he was delivering or where he could from. I did also think how fast his delivery speeds would be.

‘He certainly seemed to make a big entrance as he turned in the street. He pulled his bike up in the pub next door to my work and popped in.’ 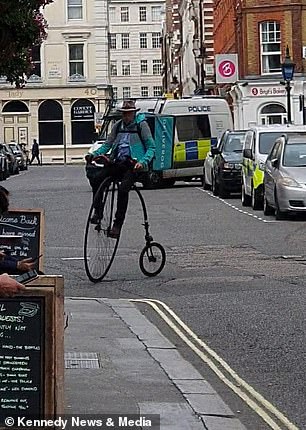 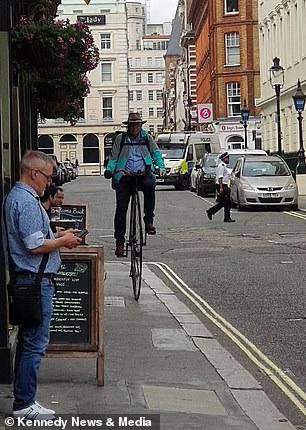 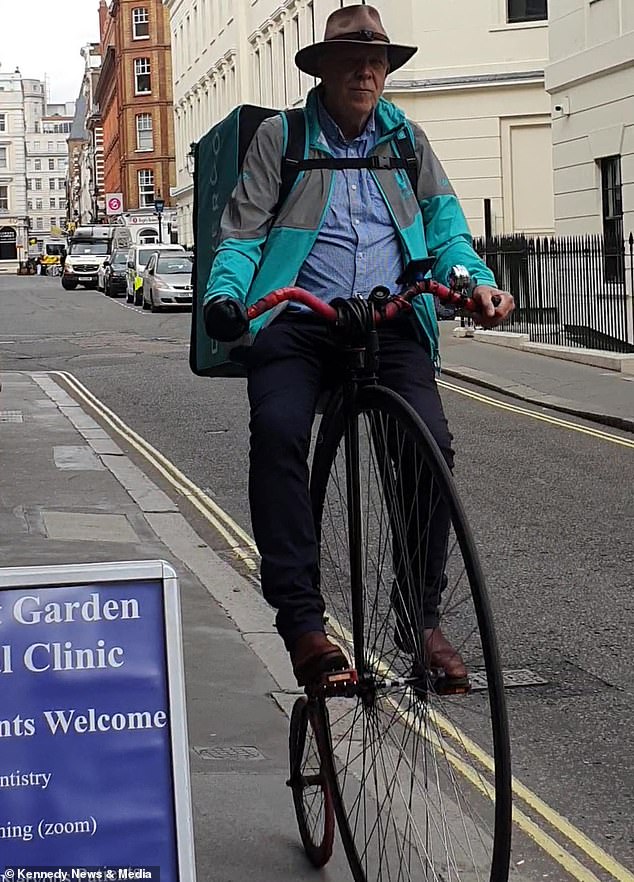 As the worker, who is sporting the food company’s famous turquoise jacket and bag, passes Mr Irvine the barber shouts: ‘Lovely mate’

After Mr Irvine uploaded the footage to social media, viewers were quick to praise the delivery driver for finding a unique way of ‘social distancing’ and ‘grafting hard’.

One person said: ‘Grafting hard and utilising whatever is in the loft to save money! Tough times.’

Meanwhile another person said: ‘It’s a time machine, silly. The customer placed their order next week.’

Another person added: ‘No way he could bunny hop that onto the pavement.’

And one user asked their friend: ‘Tazzy, is this what London is like?’

A Deliveroo spokesperson said: ‘This chap certainly has some wheels!

‘Unfortunately we aren’t able to verify that the gentleman is an active Deliveroo rider, however our doors are always open if he’d like to apply to ride with us.’