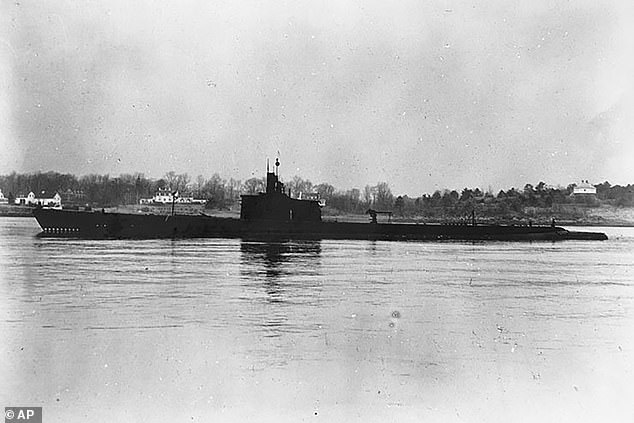 Divers off the coast of Thailand believe they have found the wreck of a US Navy submarine that was lost 77 years ago in World War II.

The divers – including one of the team who rescued the Thai cave boys two years ago – have sent photos from their six dives to the US Naval History and Heritage Command to verify that they have found the USS Grenadier.

The 1,475-ton, 307ft long Grenadier, one of 52 US submarines that were lost in the war, was scuttled by her crew after bombs from a Japanese plane nearly sent them to their graves in 1943.

All 76 crew survived the sinking, but they were tortured, beaten and nearly starved in a two-year ordeal in Japanese captivity which four of them did not survive.

The USS Grenadier off the New Hampshire coast in 1941, shortly after the US entered the war and a little over a year before she was scuttled under Japanese bombardment 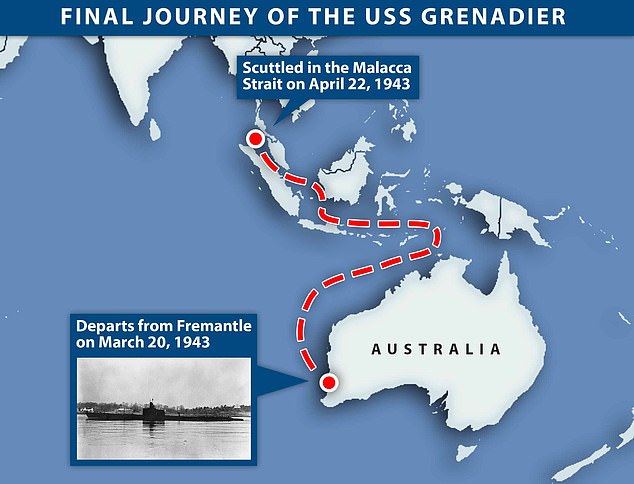 The final journey of the USS Grenadier

The Grenadier set off on her sixth and final war patrol in March 1943, sailing from Fremantle, Australia into the Strait of Malacca between the Pacific and Indian Oceans.

After sinking a small freighter off the Thai coast on April 6, she remained in the area until her final encounter two weeks later when she sighted two vessels on the horizon.

Sailing on the surface for the sake of speed, she was spotted by a Japanese plane which battered the Grenadier with bombs as she tried to go underwater.

The vessel was struck at 130ft underwater, causing a fire on board and leaving the crew battling with smoke.

Thirteen hours later, the Grenadier managed to resurface but she was fatally wounded and her propulsion system irreparably damaged.

The crew made a last-ditch effort to rig up  a sail so they could reach shore and hide in the jungle, but it proved fruitless.

The submarine’s captain also decided against another dive into 280ft of water with no power.

The Grenadier made its final stand by fending off a Japanese plane with machine guns before the crew opened her vents and watched her sink to the bottom of the Strait of Malacca.

Not until November did word reach Australia that any of the crew had survived, albeit suffering brutal treatment from their Japanese captors.

The 68 enlisted men and eight officers were taken to Penang where they were interrogated and beaten and then sent to other camps.

The men were taken from camp to camp on the Malay Peninsula and eventually to Japan itself.

Four of them – Justiniano G. Guico, Charles F. Linder, Charlie Doyle and George W. Snyder Jr – died in Fukuoka prison camp in Japan before the survivors were freed at the end of World War II.

The wreck lies 270ft underwater in the Strait of Malacca, about 92 miles south of Phuket, Thailand.

It was discovered by Singapore-based Jean Luc Rivoire and Benoit Laborie of France, and Australian Lance Horowitz and Belgian Ben Reymenants, who live in Phuket.

Reymenants was one of the divers who took part in the dramatic rescue of a dozen boys and their soccer coach who got trapped in a cave in Thailand in 2018.

The Belgian has been researching possible locations for shipwrecks for many years, while Rivoire had a suitable boat to explore the leads he found.

Reymenants would ask fishermen if there were any odd spots where they had lost nets, and then the team would use sonar to scan the sea floor for distinct shapes.

When they dived to look at one promising object, it was a lot bigger than expected, so they dug back into the archives to try to work out which lost vessel it could be.

‘And so we went back looking for clues, nameplate, but we couldn’t find any of those,’ recalled Horowitz.

‘And in the end, we took very precise measurements of the submarine and compared those with the naval records.

‘And they’re exactly, as per the drawings, the exact same size. So we’re pretty confident that it is the USS Grenadier.’

‘A complete review, analysis, and documentation may take two months to a year to complete,’ he said, adding that it will likely take a few months in this case.

The Grenadier left Pearl Harbor on her initial war patrol on February 4, 1942, having been launched in New Hampshire in 1940.

Her first five missions took it to Japanese waters, the southwest Pacific, the South China Sea and the Japanese-occupied Dutch East Indies.

She sank six ships and damaged two, before sailing on her sixth patrol from Fremantle, Australia, on March 20, 1943.

The commanding officer, Lieutenant Commander John A. Fitzgerald, recorded what happened in a report written after being freed from a Japanese POW camp in 1945.

On the night of April 20, the submarine glimpsed two small freighters and set course to intercept them the next morning, sailing on the surface for speed.

In the morning, a plane was sighted and an immediate crash dive was ordered, but the ship did not descend far enough or fast enough.

Blasts from two bombs battered the sub, key parts of the vessel were mangled,  power and lights were lost and a fire broke out. 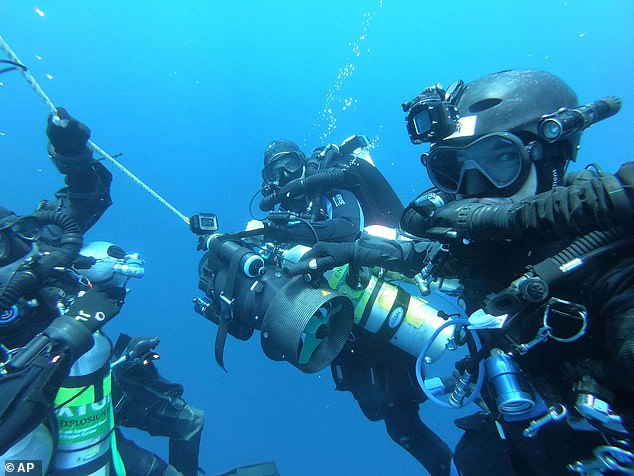 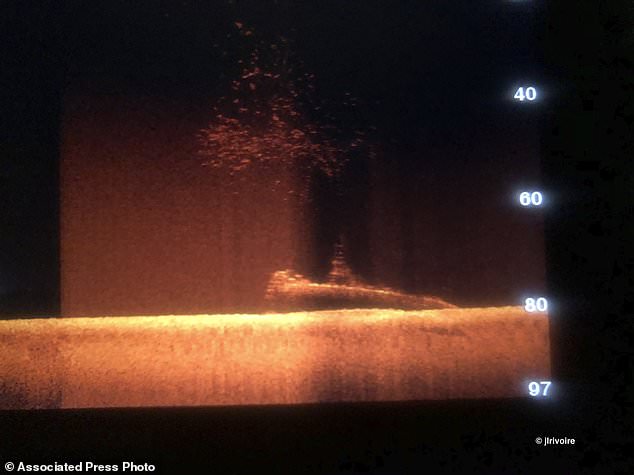 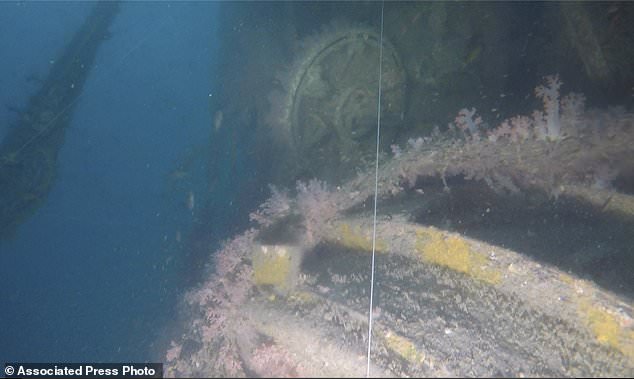 The top hatch of a conning tower can be seen from a submarine wreck somewhere in the Strait of Malacca, believed to be the remains of the USS Grenadier

When it surfaced after 13 hours it was clear the Grenadier was too crippled to flee or fight, with two ships on the horizon closing in as dawn broke.

The desperate crew tried to rig makeshift sails on a periscope to reach shore before blowing up the vessel, but the wind was obstinately calm.

Codebooks and sensitive equipment were destroyed as preparations were made to scuttle the submarine.

A Japanese plane made a run at the ship, but was fought off with machine guns, dropping a bomb harmlessly about 200 yards away.

Finally, the Grenadier’s crew opened all her vents and watched the submarine sink to the bottom of the Strait of Malacca as they abandoned ship and were hauled aboard an armed merchant vessel, which took them to Penang on the Malayan peninsula.

The crew were taken to a Catholic school requisitioned by the Japanese for use as a prison, where their ordeal soon worsened.

‘They were forced to sit or stand in silence in an attention attitude. Any divergence resulted in a gun butt, kick, slug in the face or a bayonet prick.

‘In the questioning room, persuasive measures, such as clubs, about the size of indoor ball bats, pencils between the fingers and pushing of the blade of a pen knife under the finger nails, trying to get us to talk about our submarine and the location of other submarines.’

After a few months, all the crew were transferred to camps in Japan, where the ‘sadistic’ treatment continued. Four died from a lack of medical attention.

‘This was an important ship during the war and it was very important to all the crew that served on her,’ diver Horowitz said last week.

‘When you read the book of the survivors, that was, you know, quite an ordeal they went through and to know where she finally lies and rests, I’m sure it’s very satisfying for them and their families to be able to have some closure.’ 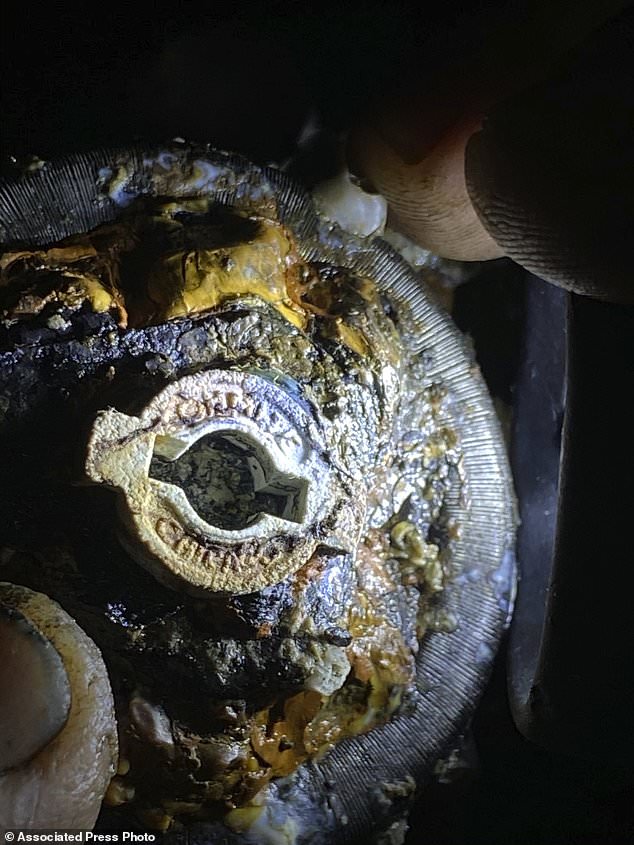 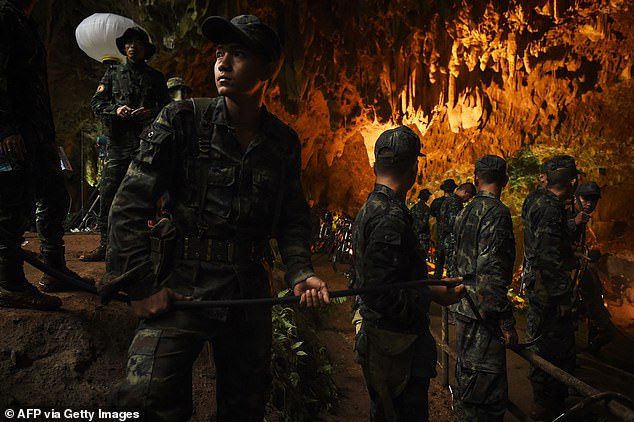