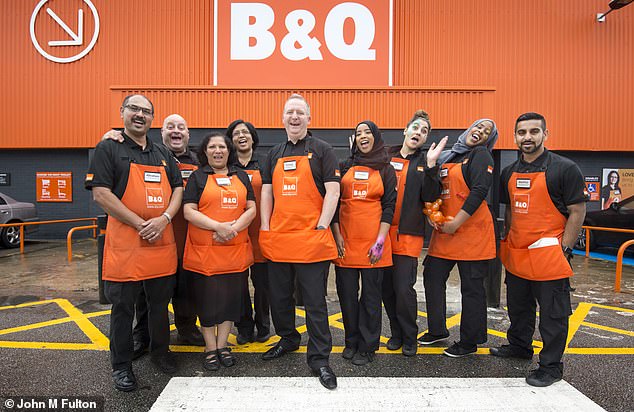 B&Q owner Kingfisher’s results were given a boost from home an improvement boom as well as its new ‘click and collect’ model as it reported 62 per cent rise in pre-tax profits today.

For its half year results ending 31 July, Kingfisher has reported only a small hit from the Covid-19 pandemic while other companies in other sectors such as travel and entertainment struggled to produce similar results.

While sales were down by 1.3 per cent in the first six months, Kingfisher reported a 62 per cent increase in pre-tax profit to £398million.

Today the Kingfisher share price rose 8.8 per cent following news of its half year results.

James Grzinic, an analyst at Jefferies said: ‘Trading into the second half has started with a bang, with Kingfisher noting that the ‘growth across all banners and categories’ has led to third quarter to date group like-for-like up 16.6 per cent.’

Richard Hunter, head of markets at Interactive Investor, said: ‘The pandemic has forced the hand of many companies in accelerating their pace of change, and for Kingfisher this has been beneficial to a transformation plan which was already in place, but moving at a pedestrian rate.

‘While the closure of stores during the lockdown had an inevitably negative effect on the first three months of the reporting period, this has now been reversed and, coupled with something of a return to normality has been the strong growth in online sales.’ 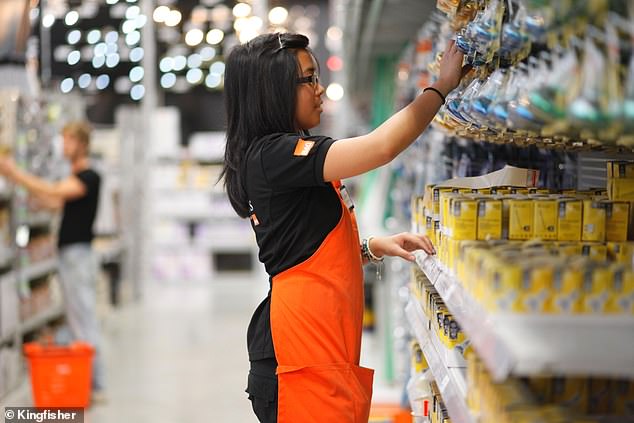 Kingfisher said that during lockdown the most popular projects related to gardening, decorating and home maintenance and repair.

He said: ‘It is creating new home improvement needs, as people seek new ways to use space or adjust to working from home.’

However, in spite of the turnaround in the second half of the year, Kingfisher said that shareholders will not benefit from a dividend due to uncertainty from the pandemic.

The improvement was largely helped by a huge increase in online sales, which increased by 19 per cent and now makes up 19 per cent of all of Kingfisher’s sales, up from seven per cent just a year ago. 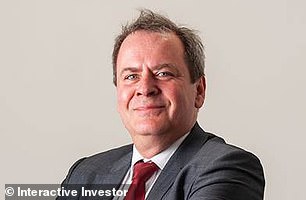 Richard Hunter, head of markets at interactive investor, said that Kingfisher has benefited from its Click and Collect model

Garnier said: ‘Customers are becoming more comfortable with ordering online. And delivering value to consumers is imperative against a challenging economic backdrop.

Hunter added: ‘In particular, Kingfisher has reordered its method of delivering customer orders, and the ‘Click and Collect’ service has been especially successful, with short fulfilment times, enabling customers to collect goods almost immediately and without spending excessive time at the pick-up points.

‘Click and Collect now accounts for over 90 per cent of group online orders, and overall online sales over the period grew by 164 per cent, now representing 19 per cent of group sales, as compared to a previous seven per cent.

‘It remains to be seen how much of that change is permanent, depending on consumer habits, but it seems likely that there has been a fundamental change in the way customers shop.

‘In addition, the very nature of the lockdown clearly prompted many to concentrate on home improvements given the absence of spending alternatives such as travel.

Kingfisher said that during lockdown the most popular projects related to gardening, decorating and home maintenance and repair.

· Over three million deck boards for gardens were sold

· More customers are growing vegetables at home so Kingfisher saw an 87 per cent growth in sales for vegetable seeds.

· Over 2.5million pots and planters were sold

· Over two million bags of cement were sold

· Over one billion screws were sold

· Over two million litres of white emulsion paint was sold in Q2.

Two years ago, Kingfisher made what it called a ‘strategic decision’ toe exit its operations in Spain, Portugal and Russia.

Hunter said: ‘The exit from the Russian business is ongoing, the ferocity of online competition has intensified during lockdown, and there are still parts of the business which are unwieldy in terms of the streamlining the company is aiming to achieve, both in terms of business lines and also geography.

‘Even so, there is little doubt that Kingfisher has made substantial progress of late. The stock has reflected both the successes and tribulations of the last few months, with Kingfisher’s relegation from the FTSE100 in March being immediately reversed with promotion in June.

‘The share price has, over the last year, risen 31 per cent, which is a significant outperformance of the wider FTSE100 index, which has declined by 21% in that period.’

Garnier added: ‘Looking forward, while the near-term outlook is uncertain, the longer-term opportunity for Kingfisher is significant,’ he added.

‘There is a lot more to do, but the new team and new plan is now established in the business and we are committed to returning Kingfisher to growth.’