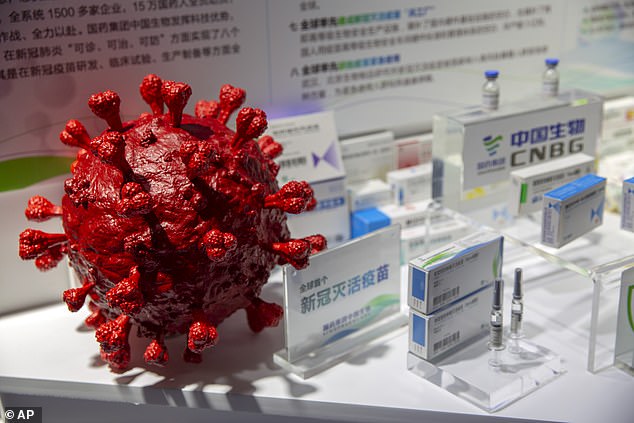 China has joined an international COVID-19 vaccine scheme led by the World Health Organization (WHO) and shunned by US President Donald Trump.

More than 170 global economies – including Australia, Canada, Japan, New Zealand and 27 EU member states – are now engaged in the programme. Neither the United States nor Russia is a member.

As many as 171 countries and regions have joined the international program called COVAX to back equitable access to COVID-19 vaccines for rich and emerging countries alike. The above picture shows boxes for COVID-19 vaccines at an exhibit in Beijing, China, on September 5

Beijing’s latest bid to join the global fight against the coronavirus follows criticism over its handling of the pandemic, which has contributed to a growing unfavourable view of China in advanced nations, a recent survey showed.

‘We are taking this concrete step to ensure equitable distribution of vaccines, especially to developing countries, and hope more capable countries will also join and support COVAX,’ Hua Chunying, a spokeswomen of the Chinese Foreign Ministry, said in a statement.

The statement did not detail the support Beijing would provide to the COVAX program, which aims to deliver at least 2billion doses of vaccine by the end of 2021.

But at a press briefing, Hua said China would purchase COVID-19 vaccines for just one per cent of its population, or 15 million people, via the scheme.

The first batch of vaccine available under the plan will be in short supply, so there would be less for other countries if China had secured doses for a large number of its 1.4 billion people, Hua stated. 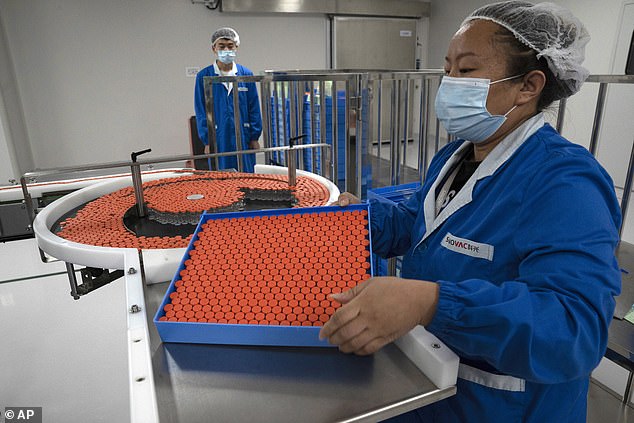 China has ample capability to make COVID-19 vaccine and will prioritise supplies to developing countries when they are ready, its foreign ministry said. Pictured, a worker feeds vials for production of COVID-19 vaccines at the SinoVac factory in Beijing on September 24

In May, Chinese President Xi Jinping pledged $2billion over the next two years to tackle the pandemic that has killed more than 1million people.

China, where the virus was first reported late last year, is also in talks with the WHO to have its domestically made vaccines assessed for international use.

As many as 171 nations and regions have joined the program to back equitable access to COVID-19 vaccines for rich and poor countries alike. Participants include about 76 wealthy, self-financing ones, but neither the United States nor Russia.

COVAX is co-led by the GAVI vaccines alliance, the WHO and the Coalition for Epidemic Preparedness Innovations (CEPI).

It is designed to discourage national governments from hoarding COVID-19 vaccines. It also aims to focus on first vaccinating the most high-risk people in every country.

But its prospects of success had been dim until recently, as some wealthy nations, including the United States, chose to sign their own supply deals.

The Trump Administration said the United States wouldn’t be joining the coalition because it did not want to be bound by the ‘corrupt’ WHO.

‘The United States will continue to engage our international partners to ensure we defeat this virus, but we will not be constrained by multilateral organizations influenced by the corrupt World Health Organization and China,’ White House spokesman Judd Deere told the Washington Post last month.

‘This president will spare no expense to ensure that any new vaccine maintains our own Food and Drug Administration’s gold standard for safety and efficacy, is thoroughly tested and saves lives.’ 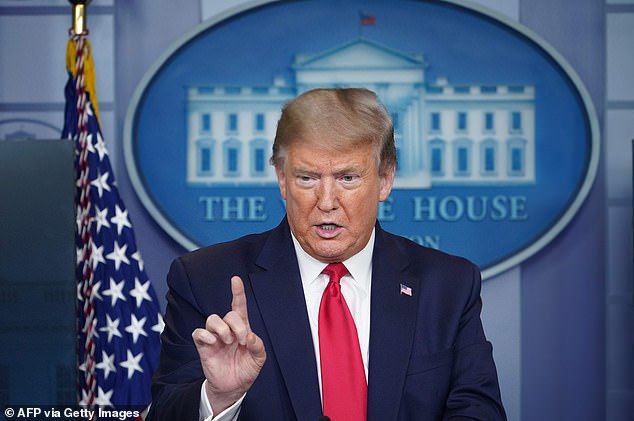 The Trump Administration told the Washington Post last month that the United States wouldn’t be joining the coalition because it did not want to be bound by the ‘corrupt’ WHO. Trump, who tested positive for the disease last week, is pictured speaking during a daily briefing in April

‘Vaccine deals are underway and we are fast approaching our initial fundraising target to jumpstart support for lower-income countries,’ GAVI’s chief executive, Dr Seth Berkley, told Reuters in a statement.

‘What seemed like an impossible challenge just a few months ago – ensuring every country, rich or poor, gets equitable, rapid access to COVID-19 vaccines – is now becoming a reality.’

The move also means China ‘will be procuring vaccines through the facility for a proportion of their own population, just as with other countries,’ a GAVI spokesman said.

China has ample capability to make COVID-19 vaccine and will prioritise supplies to developing countries when they are ready, its foreign ministry added.

China has at least four experimental vaccines in final stages of clinical trials.

Two are being developed by state-backed China National Biotec Group (CNBG), and two by Sinovac Biotech and CanSino Biologics.

It has also inoculated hundreds of thousands of essential workers and other high-risk groups, though incomplete clinical trials have provoked safety concerns among experts.