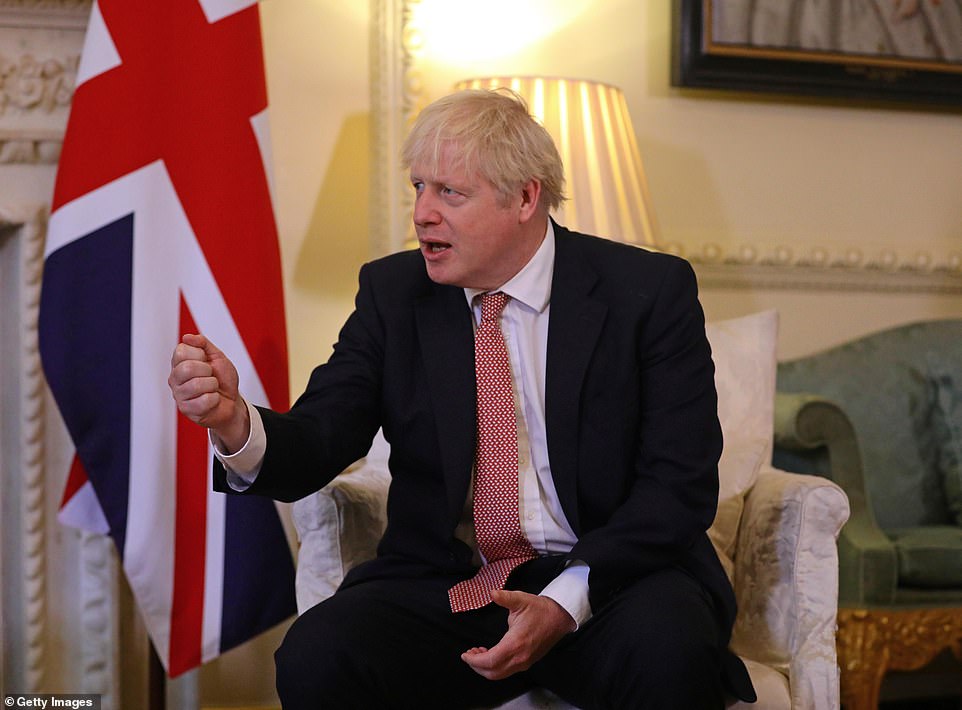 Mr Johnson will use the occasion to outline a new ‘tiered’ approach to how local Covid situations will be treated.

His chief strategic adviser Sir Edward Lister has written to MPs following a meeting with northern leaders on Friday.

In a letter shared online, Sir Edward stated that ‘rising incidence’ of Covid in parts of the country mean it is ‘very likely’ that certain local areas will face ‘further restrictions’.

The letter added that the Prime Minister believed local leaders should ‘help shape the package of measures in the most concerning areas’.

The Government will discuss ‘difficult choices’ with local leaders, the letter stated.

It comes after the UK recorded 13,864 new coronavirus cases and a further 87 deaths in the past 24 hours as the second wave continues to spread across the country.

The Prime Minister will spend the weekend finalising local measures to be announced on Monday that could see pubs and restaurants ordered to shut in large parts of the North of England.

The Government’s Scientific Advisory Group for Emergencies (SAGE) met on Thursday afternoon, when several members made the case for going further with strict national interventions, including a ban on household mixing.

They claimed the UK is in the same position as it was in early March – and a tougher lockdown is the only option.

But it is understood that Mr Johnson has ruled out bringing in any national changes on Monday, when he will unveil his new approach for dealing with Covid-19 flare-ups.

The Prime Minister is expected to introduce a three-tier system of lockdown measures in an attempt to make the existing patchwork of restrictions easier to understand.

Areas with relatively low infection levels will be placed in ‘tier one’, where only national restrictions such as the ‘rule of six’ and the 10pm curfew on pubs and restaurants will apply.

Tier two will also include bans on home visits and indoor socialising with other households. Options for tier three include total closure of the hospitality sector, a ban on overnight stays outside the home and the closure of venues such as cinemas. 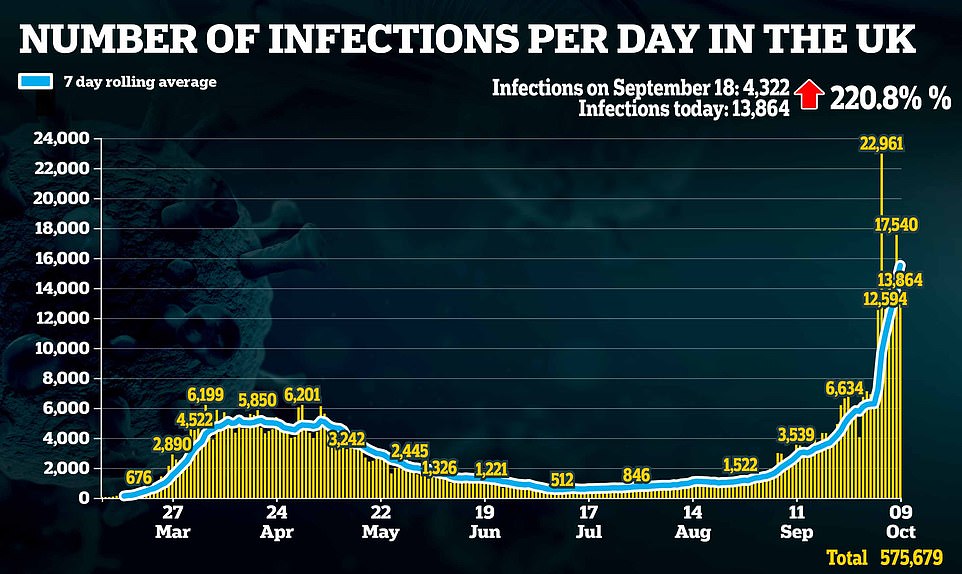 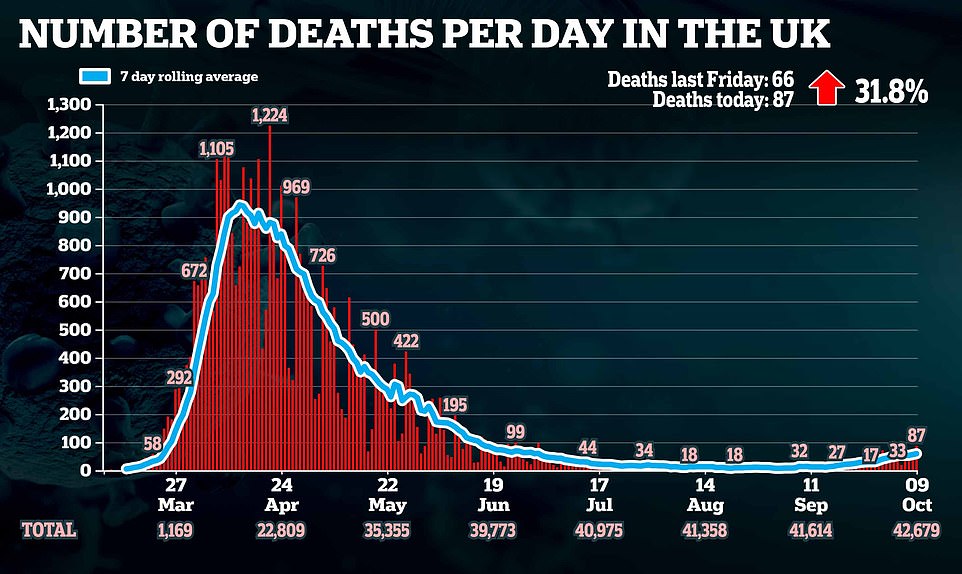 Swathes of the North of England, including Manchester and Liverpool, could be placed immediately into the tier with the most severe restrictions, so pubs and restaurants would have to shut their doors.

But regional leaders have criticised the Government for failing to properly consult them on changes. Greater Manchester mayor Andy Burnham said he would ‘use whatever means’ to challenge any closures. ‘The Government has lost the dressing room and they have to work very hard now to get it back,’ he told the BBC’s Question Time.

Downing Street insisted the Government had been ‘working closely with local leaders and local authorities throughout the pandemic’. In a bid to soothe tensions, Sir Edward Lister, one of Mr Johnson’s most senior aides, last night held calls with regional mayors including Mr Burnham.

In a letter to MPs across the North West, Sir Edward wrote: ‘The rising incidence in parts of the country means it is very likely that certain local areas will face further local restrictions.

‘The Prime Minister is clear that local leaders should be able to help shape the package of measures in the most concerning areas.’

It is understood that meetings will be held through the weekend with local leaders to discuss the different measures in the tier system and which ones the Government believes are appropriate for their areas. This week, Sage member Professor John Edmunds, a leading epidemiologist, urged ministers to immediately introduce a ‘severe’ national lockdown.

He said: ‘I don’t think it’s us holding the gun to the Prime Minister’s head. The virus is holding a gun to his head.’

Leading Sage member Sir Jeremy Farrar, director of the Wellcome Trust, said yesterday: ‘To avoid spiralling out of control [there] needs to be action now. We are close to or at the events and choices faced in early March.

‘The longer the decisions are delayed, the harder and more draconian are the interventions needed to change the trajectory of the epidemic curve.’

Meanwhile, new coronavirus restrictions are being introduced in Bangor following a sharp rise in cases, the Welsh Government has announced.

From 6pm on Saturday, people will not be allowed to enter or leave the area without a ‘reasonable excuse’ and can only meet people they do not live with outdoors, it said.

The new restrictions will apply to everyone living in the eight wards that make up the city of Bangor.

It comes in response to a ‘significant cluster of cases’ with outbreaks appearing to be ‘closely associated with young people and students’, the Welsh Government said.

In a statement on Friday, First Minister Mark Drakeford said: ‘Unfortunately, we have seen a large number of cases in Bangor, which is largely linked to people socialising.

‘We have worked closely with the local authority, the police in North Wales and public health experts to assess the need for local restrictions.

‘We all agree about the need to take targeted action in Bangor.

‘We want to discuss the wider situation in Gwynedd in more detail tomorrow to decide whether we need to extend local restrictions more widely across the county area.’

The new measures come after the Welsh Government announced that children living under local lockdown restrictions in Wales will be allowed to travel for sporting activities outside of their county boundaries.

Fifteen counties are currently subjected to the restrictions, which prohibit people from entering or leaving an area without a reasonable excuse such as work or education.

Almost 10,000 people had signed a petition calling for children to be able to travel to maintain training in their chosen sports with their clubs. 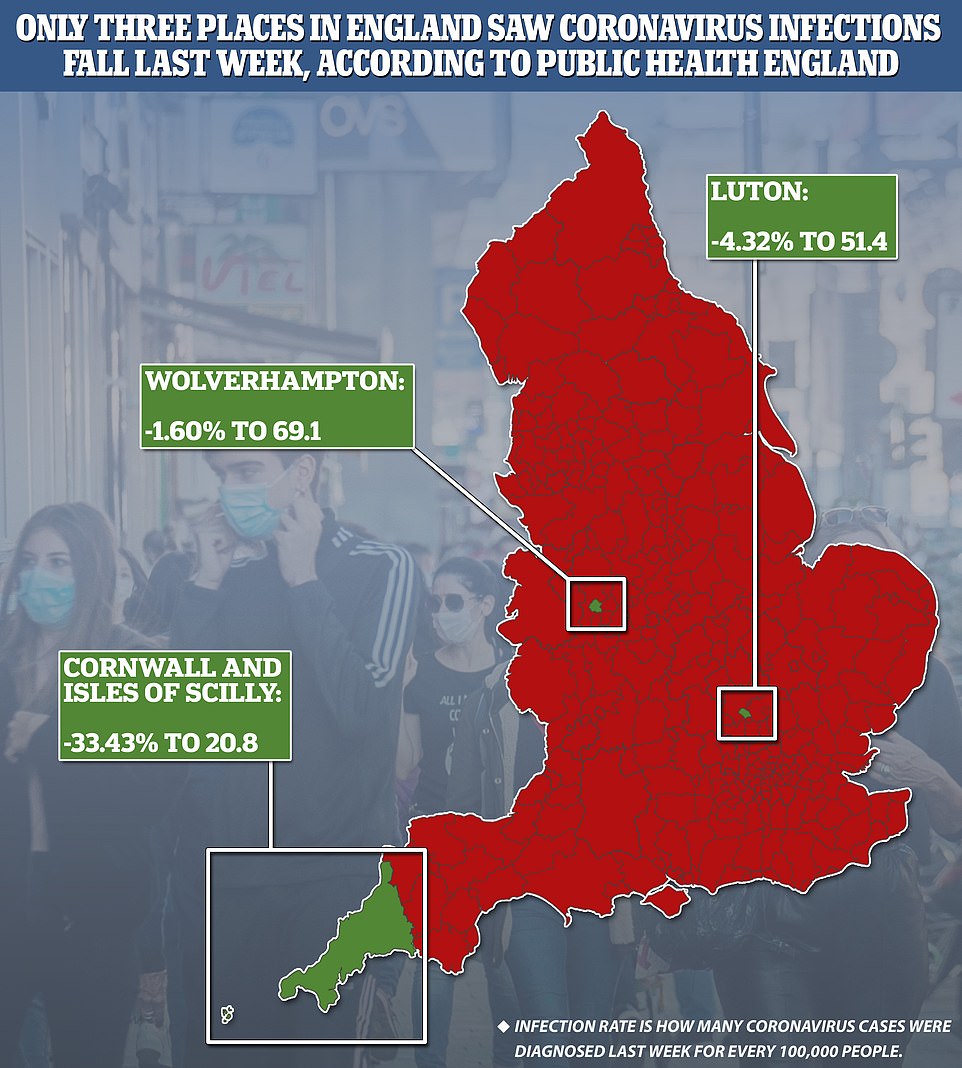 Meanwhile, a Public Health England surveillance report published yesterday showed only three places across England have not recorded a rises in their per-person Covid-19 infection rates in the past week – Luton, Wolverhampton and Cornwall and the Isles of Scilly 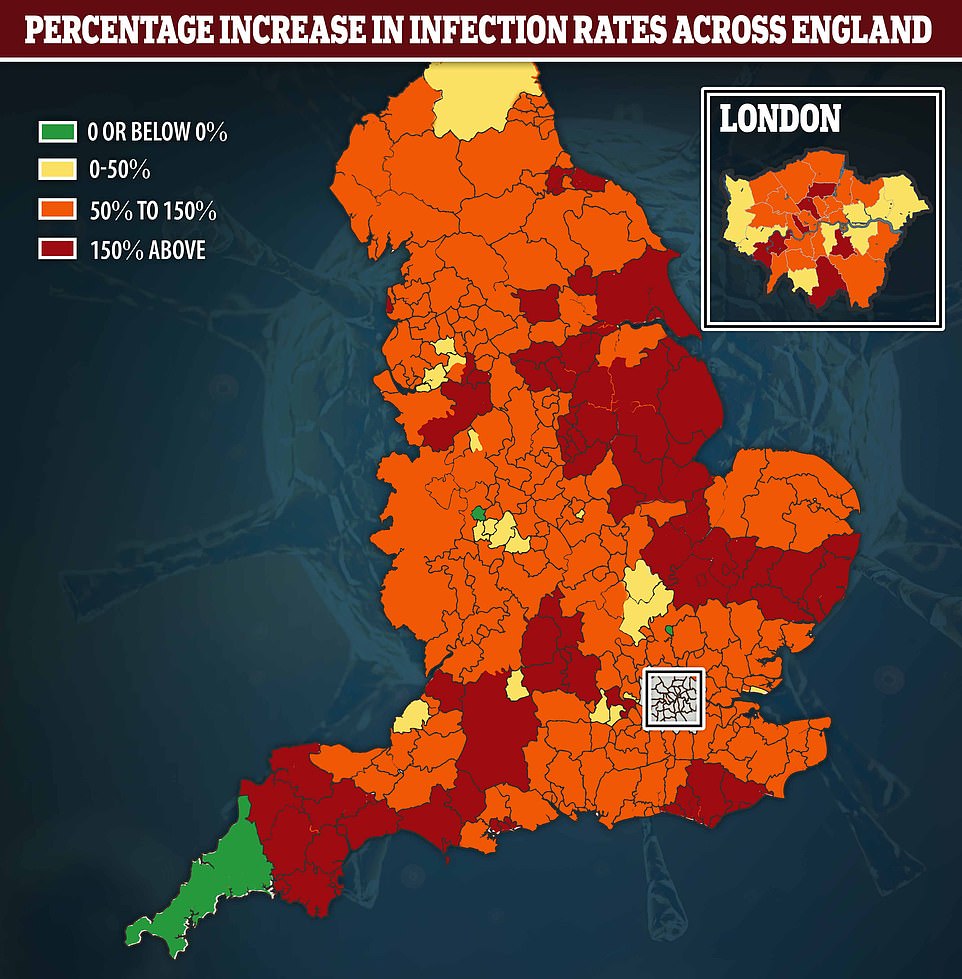 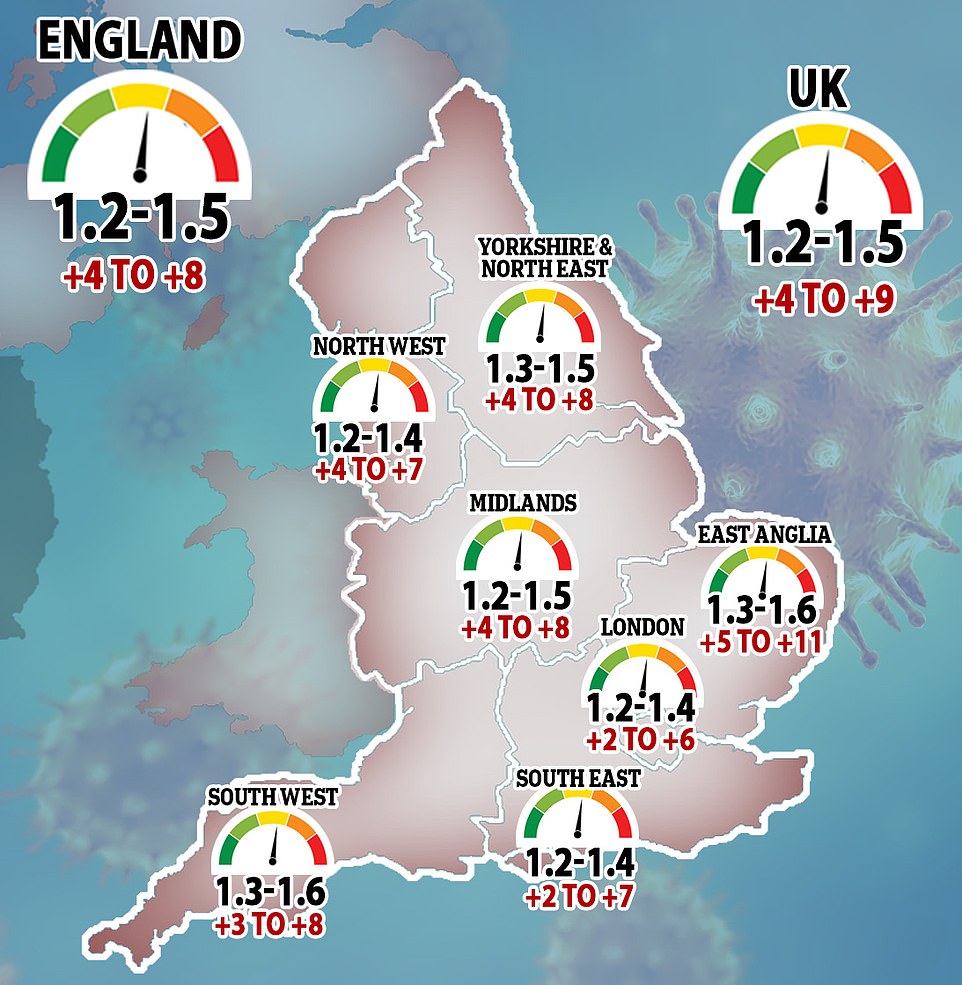 Britain’s coronavirus reproduction rate has fallen slightly, according to the Government’s scientific advisers. They say the current R value – the number of people each Covid-19 patient infects – is between 1.2 and 1.5. This is down slightly on last week’s range of 1.3 and 1.

Speaking at the Welsh Government’s coronavirus press conference, Mr Drakeford said the regulations would be amended to allow for the change.

But he warned that Covid-19 was ‘waking up for winter’ and said the Government was working to ‘turn back the tide’, but only restricting freedoms when necessary.

He added: ‘Last week, we changed the local restriction rules to enable people who live alone and are single parents to form a temporary bubble with another household in their local authority area to deal with loneliness and isolation.

Covid-19 hospital admissions continue to rise, with 491 newly-infected patients requiring NHS care on Wednesday – the most recent day figures are available for in England.

This is up 50 per cent in a week (328 on Wednsday September 30) but down slightly on Tuesday this week (524). Almost three-quarters of all admissions are occurring in the North West, North East, Yorkshire and the Midlands, the data shows.

On Wednesday 286 of the 491 hospitalisations in the North East, North West and Yorkshire alone (58 per cent).

That means nearly six in 10 admissions occurred in northern parts of the country whereas in the South East, South West and London, there were 168 people hospitalised with the virus (34 per cent of the total).

The Midlands recorded 81 more coronavirus cases and the East of England posted 17. London was the UK’s first epicentre of the disease, which researchers think allowed many Londoners to build some immunity to it.

They suggest that is why the capital is still reporting fewer cases, deaths and hospital admissions than most of the north, despite it being Britain’s most densely populated city.

The South East and South West have also enjoyed lower transmission because Covid-19 finds it difficult to spread in rural areas – a trend seen around the world.

‘Now, we intend to amend the regulations to allow children to take part in organised sporting activity, if these take place outside their county boundaries.’

Mr Drakeford said that where local restrictions had been in place for longest – in parts of south-east Wales – there was evidence that Covid-19 was ‘beginning to come under control’.

Mr Drakeford said the Welsh Government was ‘actively exploring the next steps’ with local authorities in such areas, but the pattern was not yet stable enough to lift restrictions.

On Friday, Public Health Wales said there had been a further 766 cases of coronavirus and two deaths of people with the virus.

Cwm Taf Morgannwg University Health Board confirmed that four of its hospitals were now affected by coronavirus.

At the Royal Glamorgan Hospital, 135 cases and 25 deaths have been linked to a Covid-19 outbreak.

Less than five cases of Covid-19 have been identified at Maesteg Hospital, where a ward has been closed to reduce further spread of the virus, the health board said.

Mr Drakeford previously wrote to Prime Minister Boris Johnson asking him to consider imposing travel restrictions on parts of England subjected to local lockdowns, similar to those in place in Wales.

On Friday, Mr Drakeford said he was yet to receive a reply from Mr Johnson but added there was ‘speculation’ that travel restrictions could be introduced in high incidence areas of England.

He told the press conference he was prepared to wait until Monday to hear of Mr Johnson’s plans and see how far they go in terms of protecting areas of the UK with low levels of the virus.

It comes just hours after Rishi Sunak opened the public spending taps again with the introduction of a new ‘safety net’ furlough scheme for workers at pubs, restaurants and other businesses forced to shut because of new restrictions.

In a move that will cost the Treasury billions, employees will get two-thirds of their wages, all covered by the taxpayer, in a dramatic expansion of the Job Support Scheme (JSS) due to come into effect in November.

The scheme will be targeted at all businesses that are legally forced to close by new local lockdown measures to be introduced under a new traffic light system expected to be unveiled next week.

As the Chancellor tore up his Winter Economic Plan he also confirmed he is to increase cash grants for businesses forced to close their doors, increasing the payouts to a maximum of £3,000 a month, payable fortnightly, up from the previous £1,500 maximum every three weeks.

The promise of fresh support for jobs comes as the Government prepares to unveil its new three tier strategy for local lockdowns next week.

Parts of the country which are put in the highest tier are due to be told that pubs, restaurants and cafes will have to close to slow the spread of coronavirus.

Mr Sunak told reporters: ‘I hope this provides reassurance and a safety net for people and businesses in advance of what may be a difficult winter.’

The Chancellor denied that it was just a rebranded furlough scheme, which he previously declined to extend arguing it was ‘fundamentally wrong’ to hold people in jobs that only exist inside the scheme.

He said: ‘This is a very different scheme to what we’ve had before. This is not a universal approach, this is an expansion of the Jobs Support Scheme specifically for those people who are in businesses that will be formally or legally asked to close so in that sense it’s very different.

‘I’ve always said that we will adapt and evolve our response as the situation on the health side adapts and evolves. That’s what’s happening. I think that’s the pragmatic and right thing to do.’

However, the fresh spending announced by Mr Sunak will raise further fears about the pressure on the government finances with borrowing already set to top £300 billion this year. The Office for National Statistics revealed last month that public sector debt continues to climb above £2 trillion.

Asked how much the JSS scheme would now cost, a Treasury source said: ‘Hundreds of millions of pounds a month.’