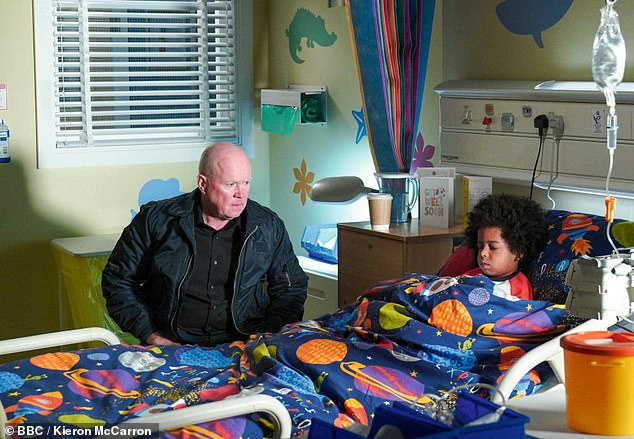 There are two mysteries about gun ownership in soapland: one, how anyone can so easily obtain a weapon without even applying for a licence, and two, how everyone is such a crack shot when they’ve never so much as visited a rifle range.

They haven’t even been to a funfair and tried to win a cuddly toy – and how many people have you ever seen walk away with the giant pink, fluffy bear? Practically none; most people are lucky if they win a small plastic duck.

Emmerdale’s Dawn recently shot dead Malone (and her dad was also able to obtain a gun – twice – allegedly for protection).

Last year, in EastEnders, Hunter managed to shoot both Ben and Keanu, and on Wednesday there’s a gun siege in Corrie when a dodgy ex of Todd’s holds the Grimshaws to ransom.

Why so many guns in soapland? Isn’t the world a dangerous and depressing enough place without our having to witness shootings being passed off as entertainment?

It smacks of lazy storytelling and, for the most part, these plotlines are totally unbelievable. More cuddly toys, please.

Lockdown was a walk in the park, given the traumas now being inflicted on Walford.

First corpse up was when Gray left Chantelle to die in the dishwasher, making this possibly the only time one has ever been used.

Why, if she had a machine, was Chantelle always drying dishes at the sink? Did they buy one out of boredom, confined to their bubble (literally)?

Maybe there were special discounts on appliances that could double as murder weapons.

As if this were not enough to keep the plotlines at boiling point, along comes a car crash that wipes out Raymond’s adoptive parents and sister.

Raymond is the product of a 2016 one-night stand between Phil and Denise, and now Phil is paying secret visits to his injured son, the only survivor of the accident.

You may remember that Phil discovered his paternity after Sharon overheard Denise telling Shirley.

Sharon is The Great Lurker: if there’s a conversation to be overheard, she’ll be there, the clatter of her false eyelashes being the only thing that threatens to give away her presence.

There’s a huge shock coming up for Our Stace, too. Brace yourselves. It’s a good one.

CORONATION STREET: UNHAPPY BIRTHDAY TO YOU 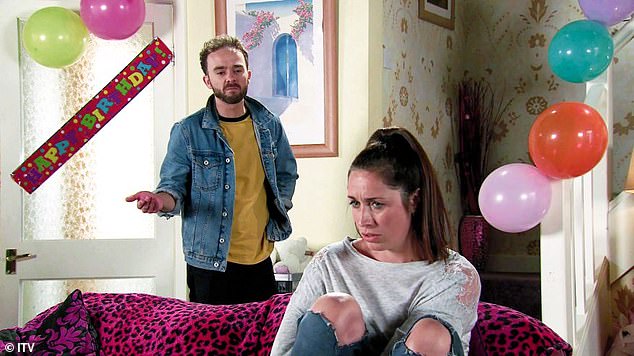 David’s plans for an 80th birthday party for Audrey are ruined in Coronation Street when Shona brings random guests she picked up at the café. Pictured: Shona, with David

Shona was not happy arriving back at the Platt household to find that she had been plonked in the basement.

‘I’ll miss you, yer massive weirdo,’ she said, by way of farewell to Roy. Give her a week underground with the family she can’t remember (luckily for her) and she’ll be begging to go back to Weatherfield’s answer to Bates Motel.

David has his work cut out, though, when plans for a belated 80th birthday party for Audrey are ruined by random guests Shona has picked up at the café.

Where did she find them – hiding in a teapot? That’s the question, because custard tarts invariably outnumber patrons there by three to one.

David calls the party off, but maybe it’s just as well, as Shona clearly wouldn’t be able to find a party frock.

Ripped jeans may be all the rage, but she increasingly looks as if she’s had a run-in with an escalator going down while she’s heading up; the only place you’d get to see more kneecap is at Old Trafford.

Gary and Ray are up to their evil ways, each trying to outdo the other in that gangster lite mode that only these two can muster; and a trip to the Lakes goes horribly wrong for Evelyn and Arthur.

Hurry up with George and Mary getting together, please, because Eileen’s back; she can get her claws into an available man quicker than an owl on a mouse hunt.

EMMERDALE: LAND ON YOUR FEET 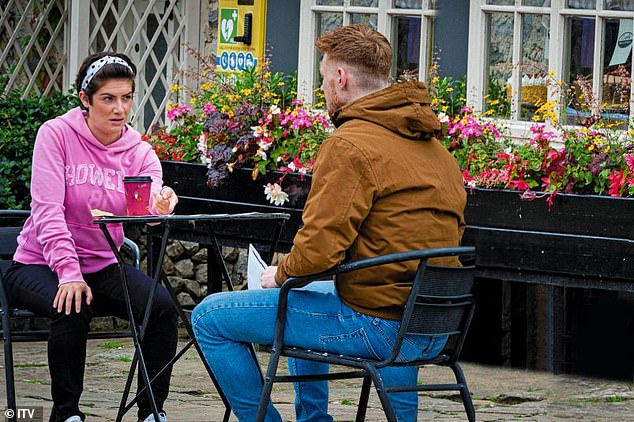 Victoria decides whether she should rent or sell the land she inherited from her grandmother Annie in Emmerdale. Pictured: Victoria, with Luke

Of all the things you want to inherit in Emmerdale, land is not one of them. It causes nothing but problems and no one ever makes any money from it.

What you really want to inherit is Home Farm’s wine cellar, which miraculously refills itself without anyone having to nip to Tesco.

So, the land Victoria has inherited from grandmother Annie is destined to bring only trouble. Should she rent it out or sell it?

Whatever she decides, maybe this will be the catalyst to firm up the on-off romance with Luke. Who can resist an heiress? Even if it means mowing grass.