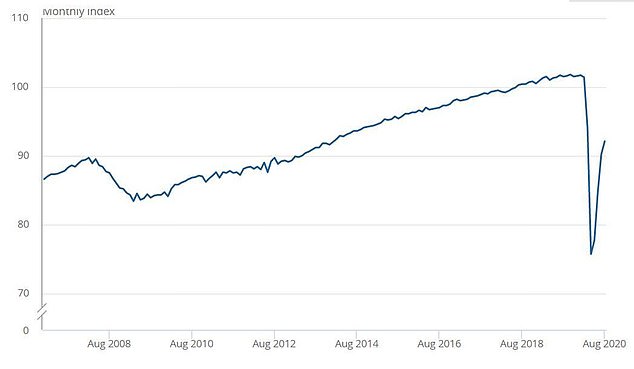 The UK economy grew by just 2.1 per cent in August as the economic recovery from the coronavirus crisis stalled despite Rishi Sunak’s Eat Out to Help Out scheme.

Data published this morning by the Office for National Statistics showed that the rate of growth was much lower than the 4.6 per cent which analysts were expecting.

The 2.1 per cent figure is also massively down on the 6.4 per cent expansion recorded in July.

The numbers are likely to fuel fears that a V-shaped bounce back from the damage done by the pandemic is now slowing ahead of further uncertainty in the coming winter months.

The data also represents a hammer blow to the Chancellor after he encouraged people to return to normal life by paying half of their restaurant bills on some days in August as part of the Eat Out to Help Out scheme.

The ONS’s deputy national statistician for economic statistics Jonathan Athow said: ‘The economy continued to recover in August but by less than in recent months.

‘There was strong growth in restaurants and accommodation due to the easing of lockdown rules, the Eat Out to Help Out scheme, and people choosing summer staycations. However, many other parts of the service sector recorded muted growth.

‘Construction also continued its recovery, with a significant boost from housebuilding. There was limited growth in manufacturing, which remains down on its pre-pandemic level, with car and aircraft production still much lower than the start of the year.’ 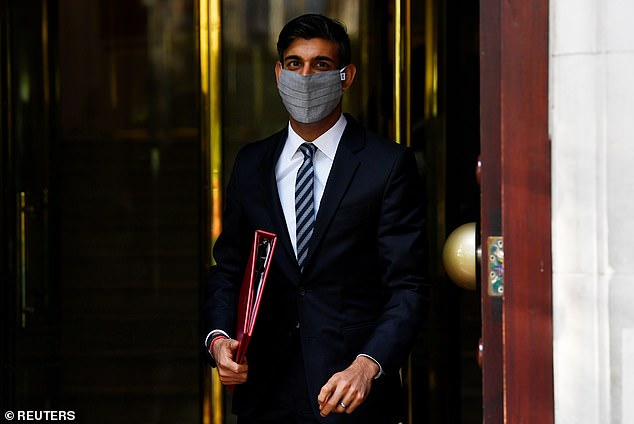 The 2.1 per cent economic growth was recorded despite Chancellor Rishi Sunak’s Eat Out to Help Out scheme being in place during August

The British Chambers of Commerce said the growth figures suggested the UK economic recovery could be ‘running out of steam’.

BCC head of economics Suren Thiru said: ‘While the latest data confirms a rebound in economic activity continued into August, the sharp slowdown in growth indicates that the recovery may be running out of steam, with output still well below pre-crisis levels.

‘The increase in activity in August largely reflects a temporary boost from the from the economy reopening and government stimulus, including the Eat Out to Help Out Scheme, rather than proof of a sustained ‘V’-shaped recovery.

‘Although the UK remains on course to exit recession in the third quarter, the looming triple threat of surging unemployment, further restrictions and a disorderly end to the transition period means the recent rally in economic output is likely to be short-lived.

‘As a result, the Government must stand ready to help firms navigate a difficult winter, beyond the Chancellor’s recent interventions.

The latest ONS figures were published after the Bank of England said yesterday that it is ‘by no means out of firepower’ and will respond ‘promptly and strongly’ to a second and even third wave of coronavirus to prop up the economy.

Governor Andrew Bailey said the Bank will be ready to act when it is ‘necessary and appropriate’ for it do so.

Speaking at a virtual conference on banking stability, Mr Bailey cautioned the risks to the UK economy were ‘very much to the downside’ due to spiralling numbers of Covid-19 cases and increasing Government measures to bring it under control.

But he gave assurances that the Bank had not exhausted its monetary policy tools, despite having slashed rates already down to the historic low of 0.1 per cent.

He said: ‘We are by no means out of firepower and will use that firepower as appropriate, promptly and strongly, in response to any second and third waves (of Covid-19) where we think it’s necessary and appropriate to do that.’

His comments came after the Government’s spending watchdog warned Britain’s economic recovery is now ‘on hold’ because of a surge in virus cases and ministers reimposing restrictions on freedoms.

Economists from the Office for Budget Responsibility told the Treasury Select Committee that the economic bounce back could be on pause ‘for a while’.

They said the recovery prompted by the initial easing of the nationwide lockdown had now ‘flattened off’.

The OBR revealed last month that Mr Johnson borrowed more money in the space of five months to tackle the coronavirus crisis than the government did in the entire year after the 2008 financial crash. 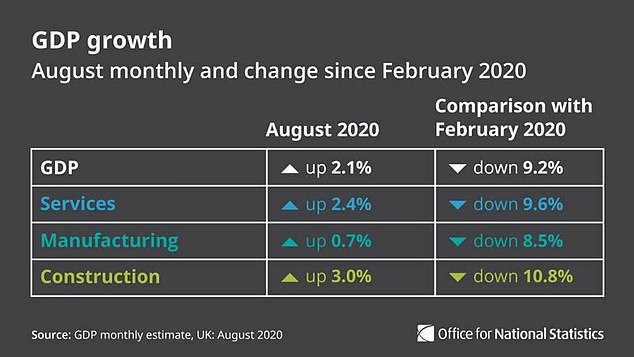 In in a bleak 10-page analysis of the state of the public sector finances, the watchdog underscored how deep the nation had plunged into the red.

From April to August this year net borrowing ballooned above £173billion as Mr Sunak bankrolled furloughed employees’ wages and bailed out businesses.

The eye-watering figure was a £146.9billion increase on last year and, with more than half the fiscal year still to go, smashed the £157.7billion annual record total set during the peak of the financial crisis in 2009-10 when Gordon Brown’s administration’s grappled with a global recession.