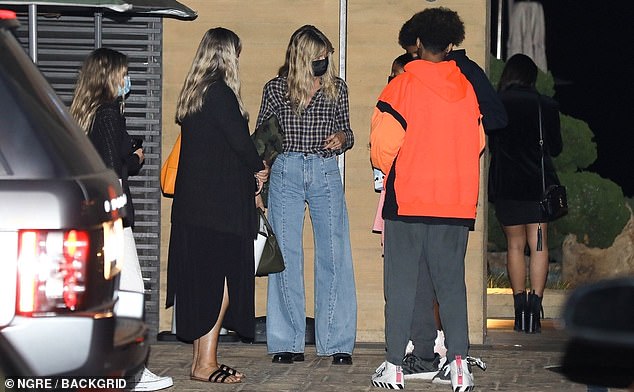 Heidi Klum recently called out scammers for selling tickets to her annual Halloween Party, which will not be taking place this year due to the Coronavirus pandemic.

On Friday, the supermodel put it all behind her, as she enjoyed dinner at Nobu Malibu with her four kids, to celebrate daughter Lou’s 11th birthday.

The 47-year-old and her offspring enjoyed a special evening with an ocean view, before she let her 16-year-old daughter, Leni, take the wheel of her Range Rover.

For the sushi outing, Heidi kept it casual in a pair of palazzo denim jeans and a checkered button down.

The five-foot-nine stunner looked effortlessly chic, throwing on a pair of black leather boots for a nineties inspired look.

She carried an olive green and white leather tote bag, as the family unit waited for their car in valet.

Heidi let the ocean air do its thing, as she rocked beach waves after the seaside meal. 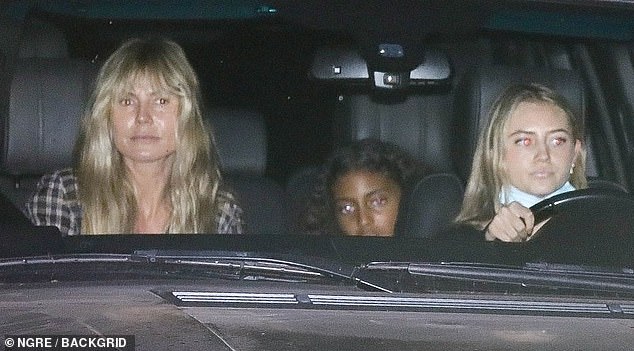 Front-seat driver: After allowing Leni to take the reigns of her car, Heidi kept a close watch on the situation as she monitored the young driver

The family made sure to protect themselves and follow CDC protocol, as they all wore masks.

After getting her Range Rover, Heidi let daughter Leni tackle the winding roads of PCH.

A protective mother, Heidi kept her eyes on the road the whole time, as she monitored Leni’s driving with Lou in the backseat.

Earlier in the night, the three ladies had some fun in the restaurant, as she posted a video to her Instagram.

Heidi, Leni and Lou, swayed their hips to the restaurant’s music, as she captioned the fun video, ‘When your girls are almost as tall as you,’ with a red heart. 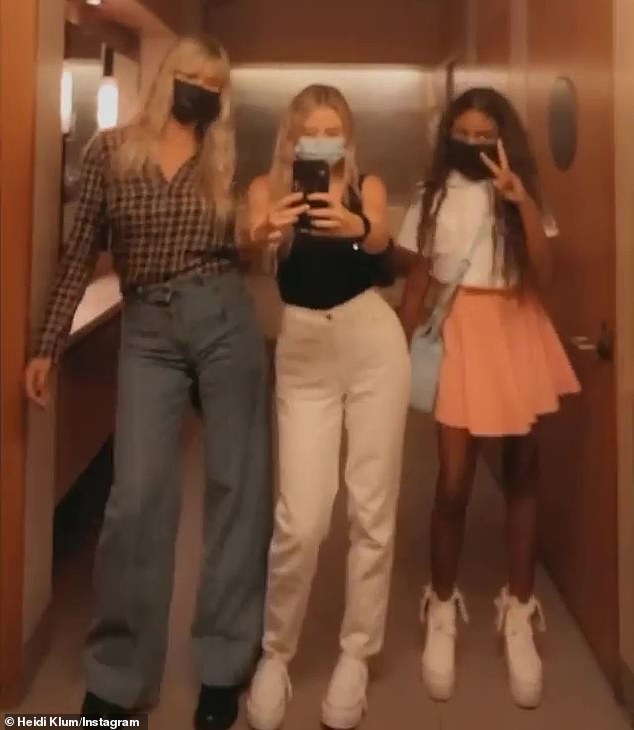 Growing girls: Heidi, Leni and Lou, swayed their hips to the restaurant music as the mother marveled at how tall her girls were getting

A mother of four, Heidi also has sons, Henry, 15, and Johan, 13, who she shares with ex-husband of nine years, Seal.

Not present for the dinner outing was Heidi’s husband of one year, musician, Tom Kaulitz, 31.

Earlier in the day, she took to social media to share that she had voted, as California’s early voting period began on October 5th.

‘I just voted, it is so important to vote, please don’t forget to vote…I just did it,’ she said to the camera as she flashed her ‘I Voted’ sticker. 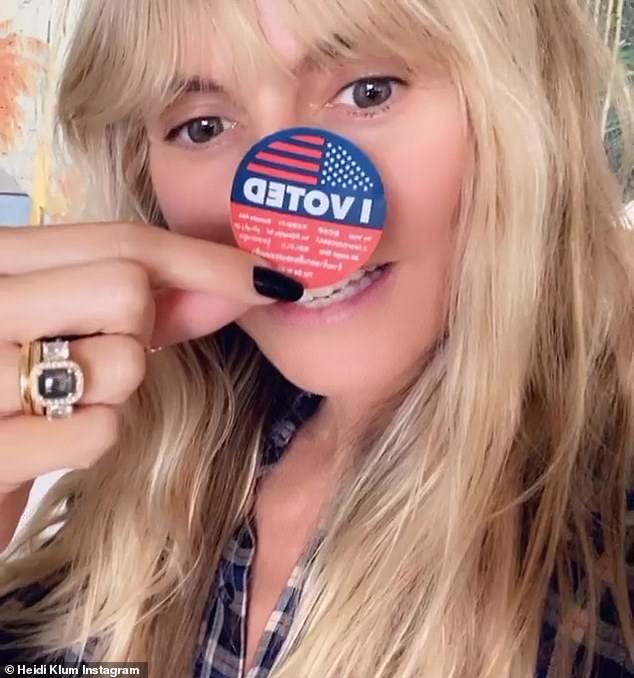 Vote: Heidi took to Instagram to share that she had voted early, as she urged her followers to vote in the upcoming November election

Heidi, who is usually gearing up for her annual Halloween extravaganza at this time, had to shut down a scam yesterday, after seeing that people were selling tickets to this year’s bash.

Taking to social media, Heidi said: ‘Hello Halloween lovers, someone just brought this to my attention…I guess people are selling tickets to my Halloween party.’

She continued, ‘Guys, this year there will not be a Halloween party, there will be something fun coming…but no tickets, I have actually never sold tickets so this is all false! Don’t buy them guys.’ 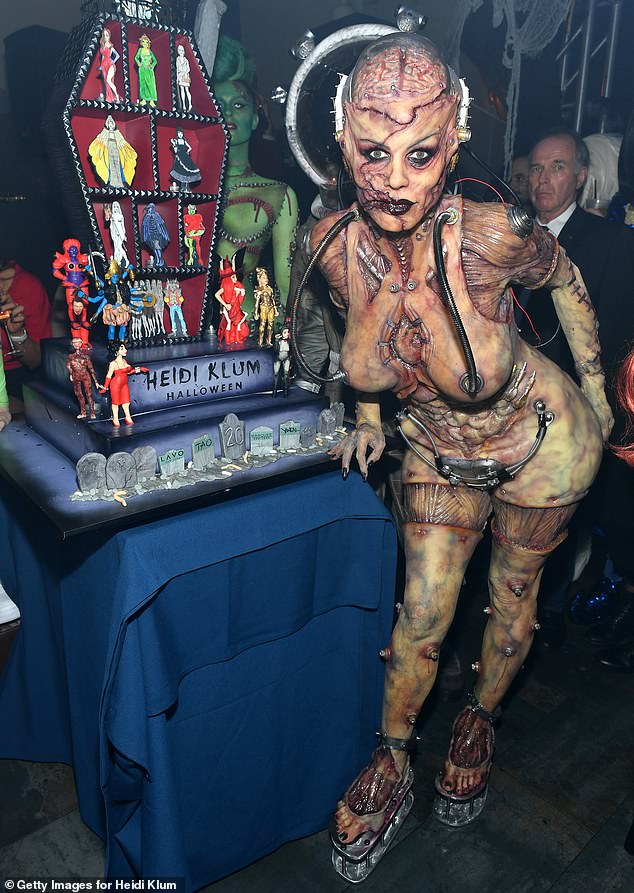 Halloween queen: Last year, Heid got ready in an NYC storefront ahead of her Halloween  bash. The model had a full team applying loads of prosthetics for her mutant alien-like costume; pictured Halloween, 2019

The video revealed that people were trying to gauge innocent buyers to spend $3490 for an event that does not exist.

The self-proclaimed ‘queen of Halloween’ goes all out with her events, sporting fully transformative costumes.

Last year, she even got ready in a New York storefront with onlooking fans, ahead of her epic bash where she came dressed as a mutant alien.

Despite the fact that this holiday season will be different, the America’s Got Talent judge has a lot going for her, as the show was nominated for a People’s Choice Award for Best Competition Show. 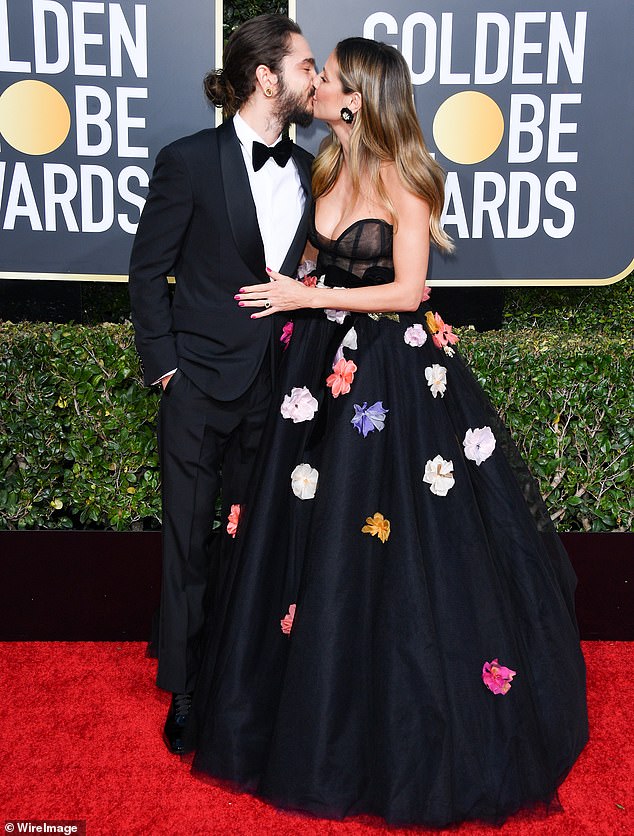 New love: Heidi and her husband Tom, who is also a German-native, got married in 2019 after a whirlwind romance; pictured at the Golden Globes, January 2019