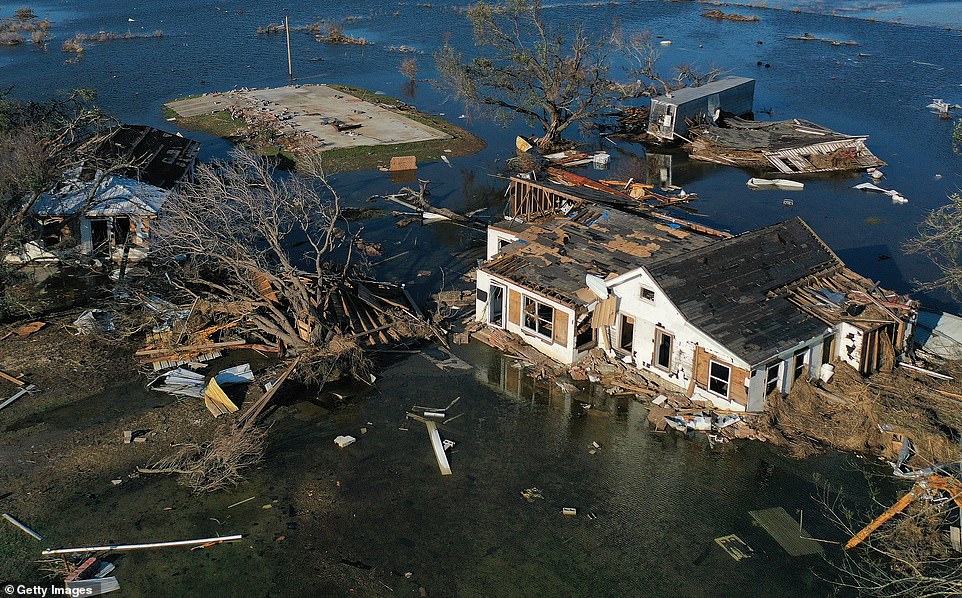 Aerial images and drone footage shows the devastation of Hurricane Delta after it passed through Louisiana, leaving homes that were already destroyed by Hurricane Laura, surrounded by floodwaters.

Hurricane Delta followed Hurricane Laura, which roared ashore with its staggering 150mph winds. Delta made landfall with less wind but with ferocious downpours.

The two back-to-back hurricanes in the space of six weeks have left an area of southwest Louisiana blanketed with tarpaulins, debris and flooded streets – but not despair.

Delta made landfall Friday evening near the coastal town of Creole with top winds of 100mph. It moved over Lake Charles, a city where Hurricane Laura damaged nearly every home and building in late August.

No deaths had been reported by Sunday morning. About 10,000 utility workers were dispatched Saturday to get power restored to thousands of customers.

Aerial images and drone footage shows the devastation of Hurricane Delta after it passed through Louisiana, leaving homes (pictured in Creole, Louisiana) completely destroyed in some areas and streets flooded 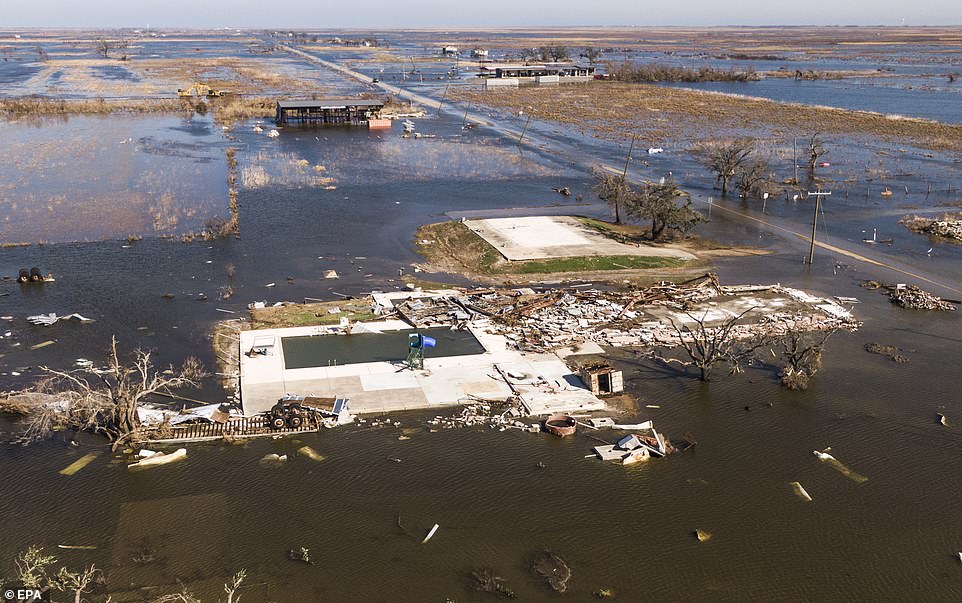 Delta made landfall Friday evening near the coastal town of Creole with top winds of 100mph. A home was torn from its foundation in Cameron, Louisiana 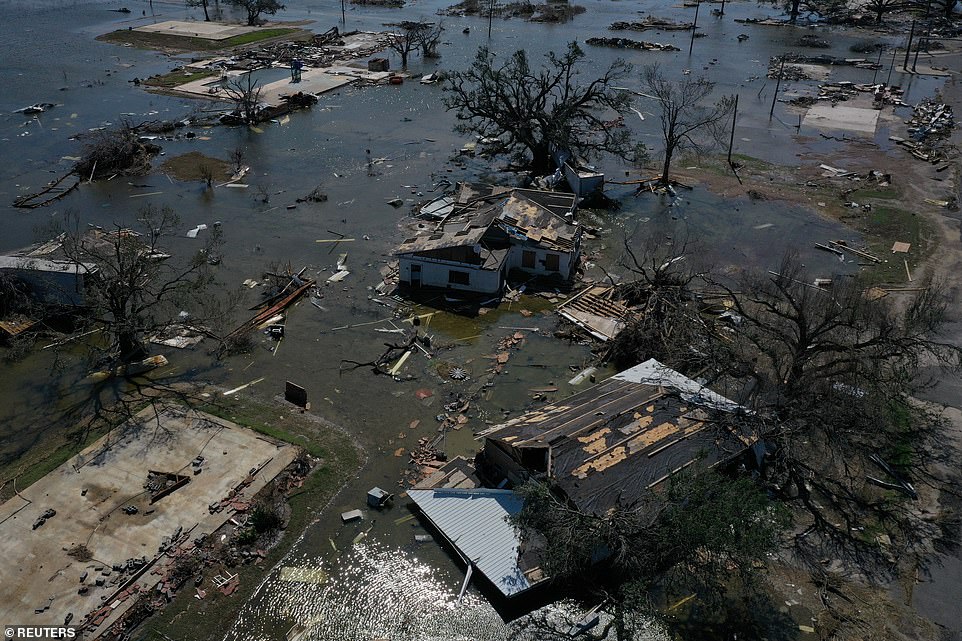 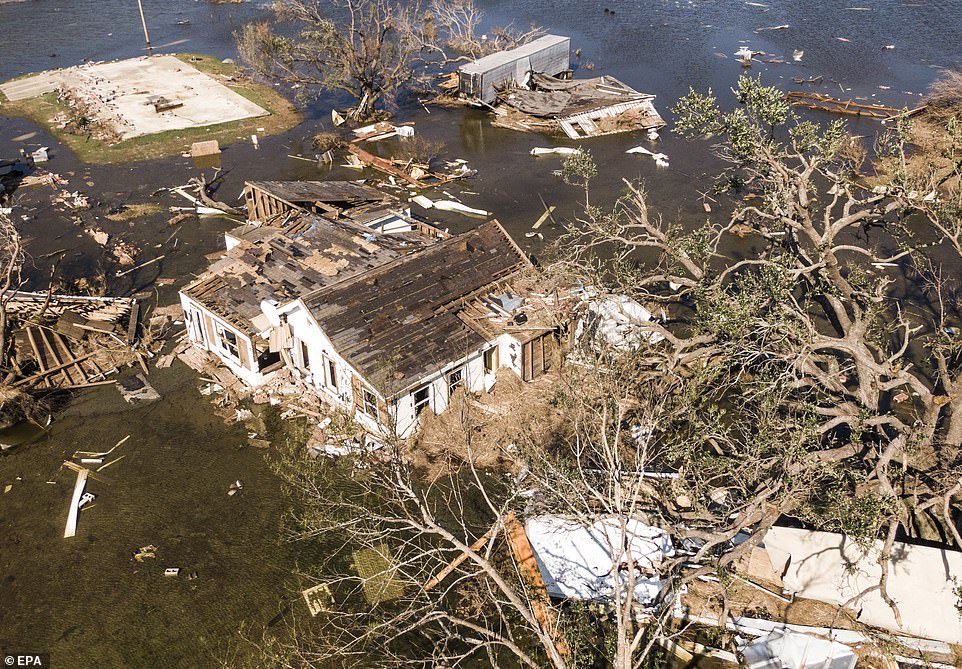 No deaths had been reported by Sunday morning. A damaged home is seen in Cameron, Louisiana, on Saturday 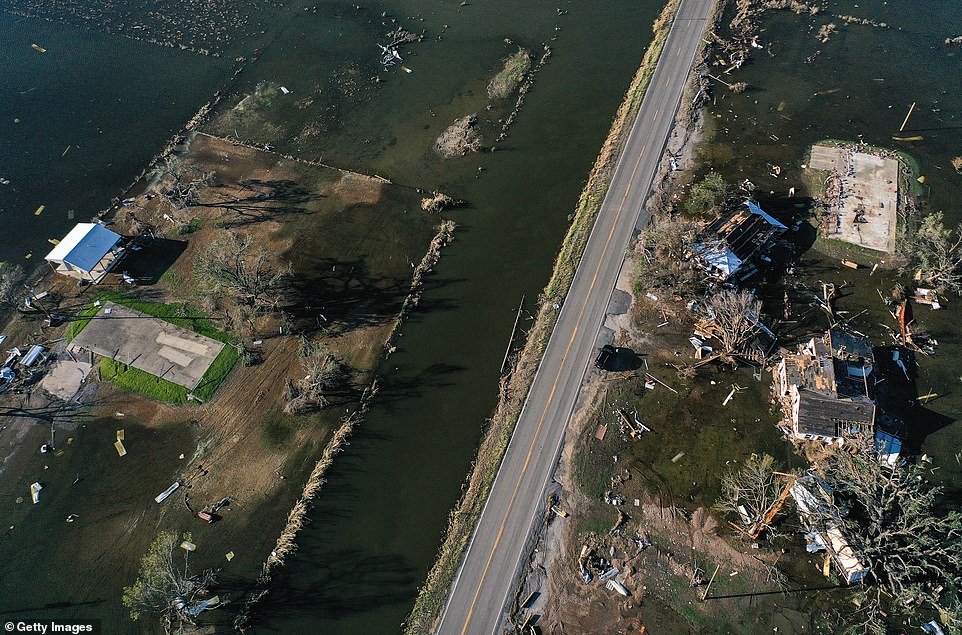 About 10,000 utility workers were dispatched Saturday to get power restored to thousands of customers. An aerial view of flood waters is seen on Saturday 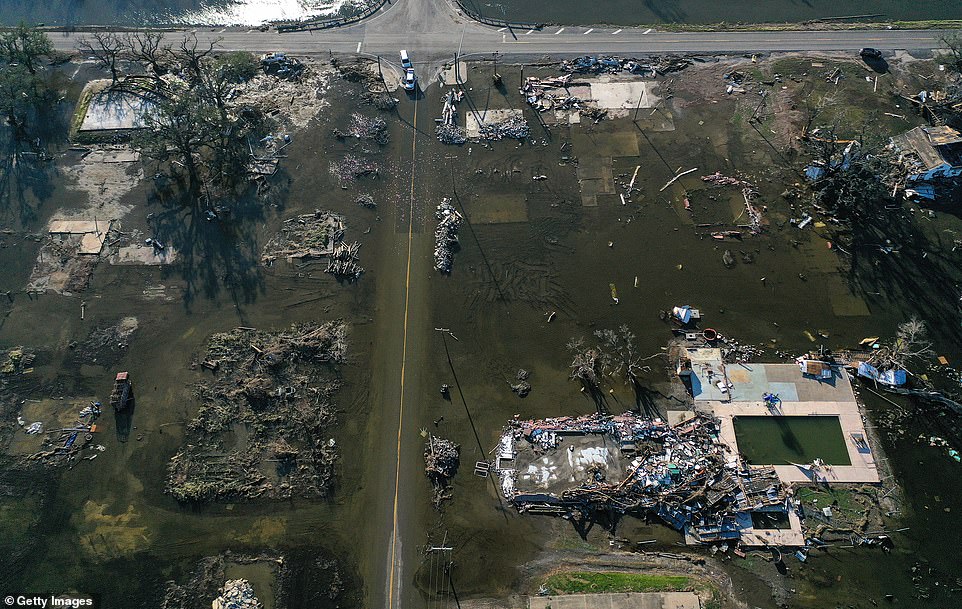 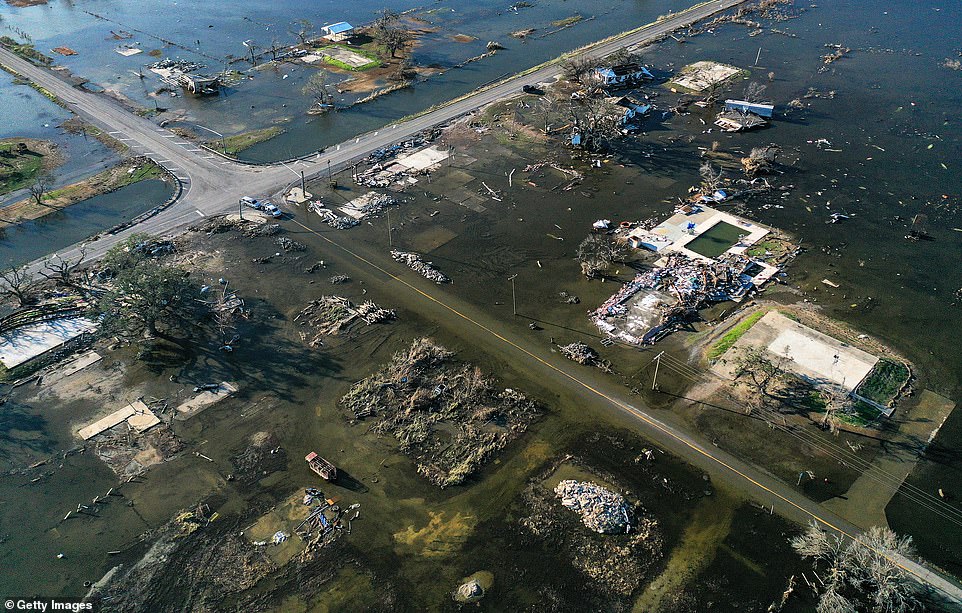 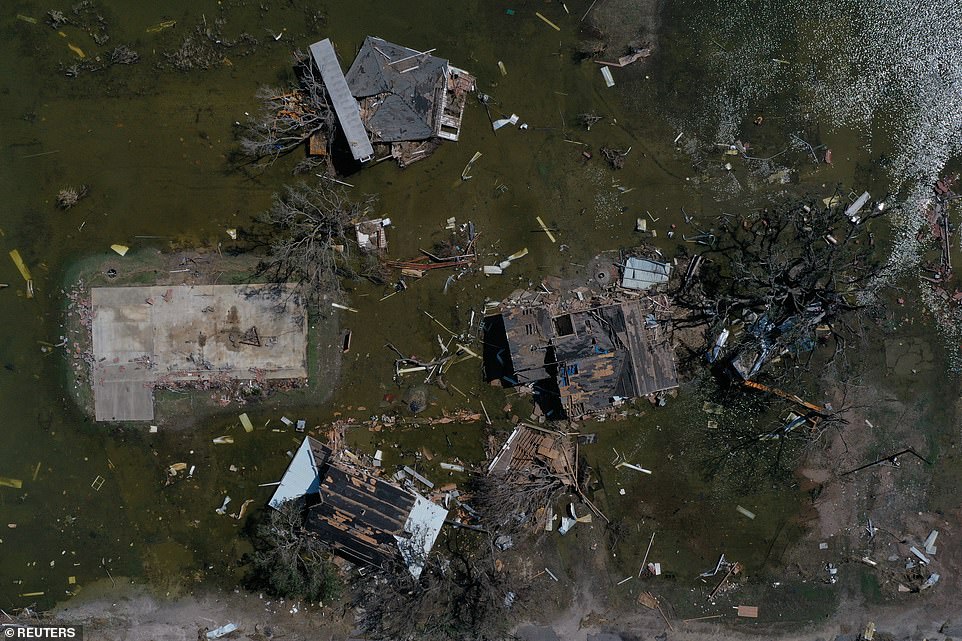 Homes and businesses destroyed by Hurricane Laura are surrounded by flood waters in the aftermath of Hurricane Delta in Cameron, Louisiana, on Saturday 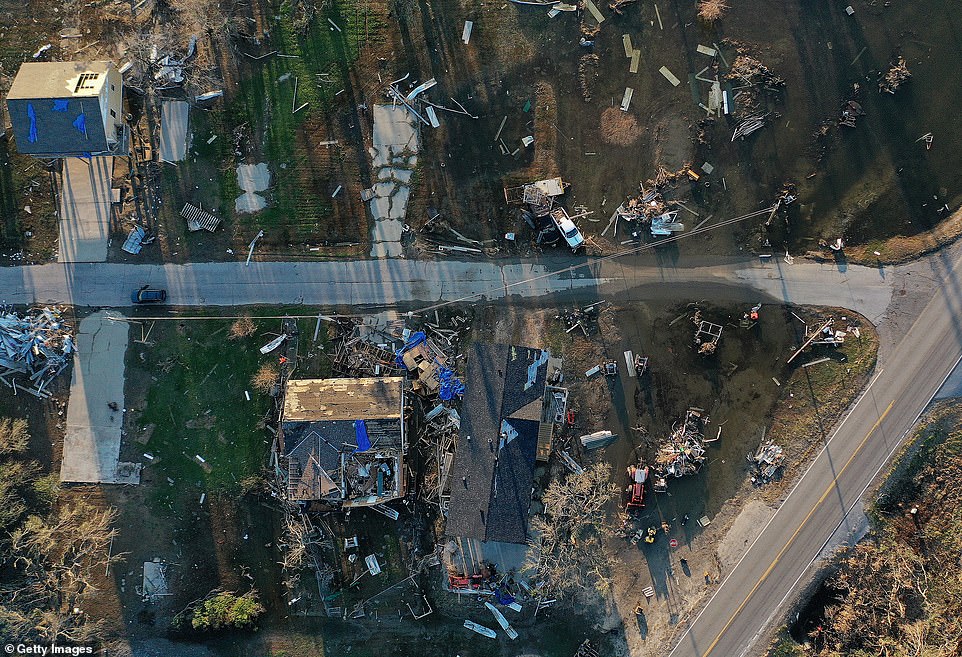 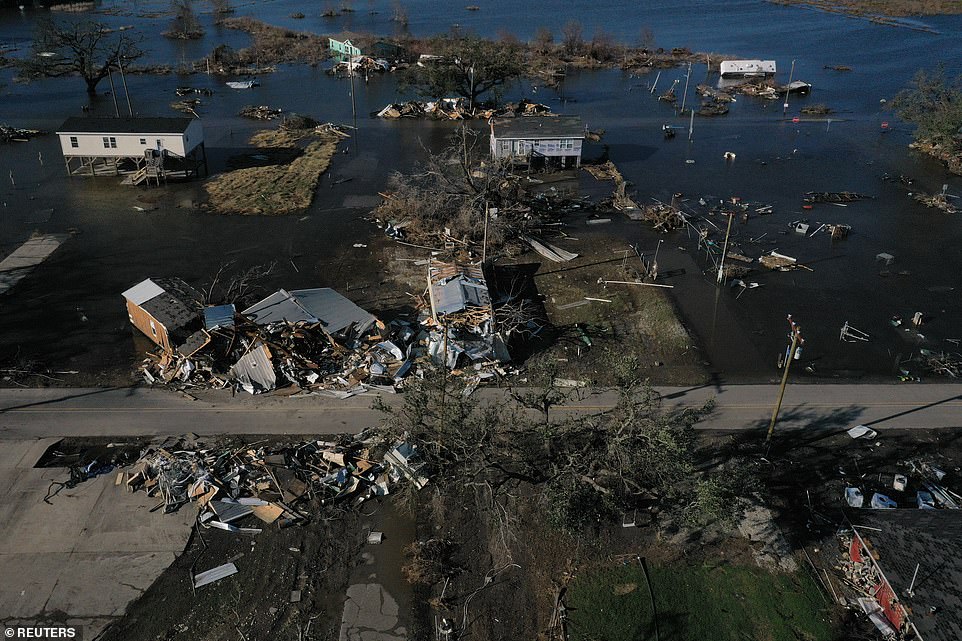 Homes are seen destroyed in the aftermath of Hurricane Delta in Cameron, Louisiana, on Saturday

Earnestine and Milton Wesley had decided to ride out Delta in their Lake Charles home, damaged just weeks earlier by Laura.

As the wind rustled the tarp above them, they grabbed it through the hole in the ceiling and held on tight. Water poured in, flooding their den.

‘We fought all night long trying to keep things intact,’ Milton said. ‘And with God’s help we made it.’

Hannah Franklin lives in Iowa, a small town of about 3,000 people outside of Lake Charles. She evacuated for both Laura and Delta, but she said not everyone could.

Some people have been living in tents because they don´t have anywhere to go, she said.

She’s worried that the region isn’t getting the help that it needs. At the same time, she’s been heartened by the way the community has pulled together. Neighbors check on neighbors, bringing food or water.

‘It’s been really, really sad to see. But at the same time,’ she said, ‘it warms your heart to see … how strong Louisiana is’. 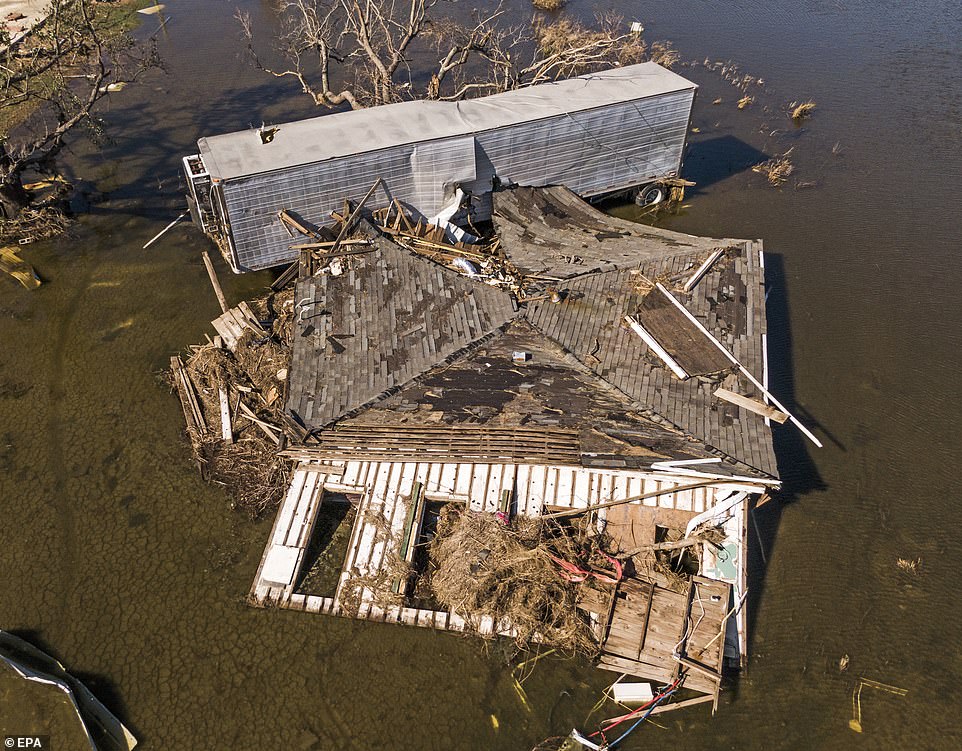 A photo taken by a drone shows damaged property in Cameron, Louisiana, on Saturday. The hurricane came ashore and caused widespread damage and power outages to hundreds of thousands of people in Louisiana, Texas and Mississippi 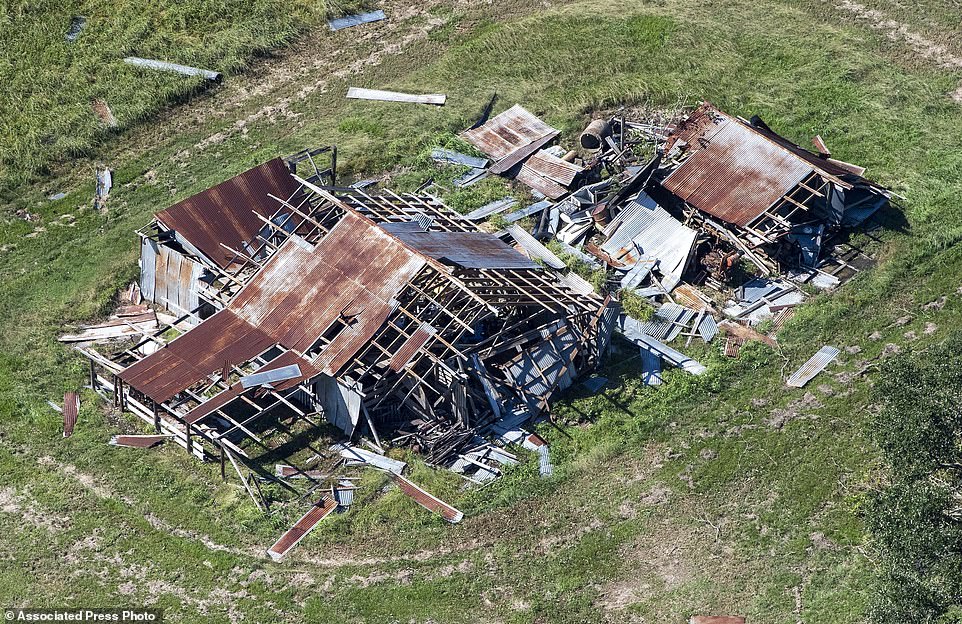 The aftermath of Hurricane Delta is seen Saturday near Jennings, Louisiana 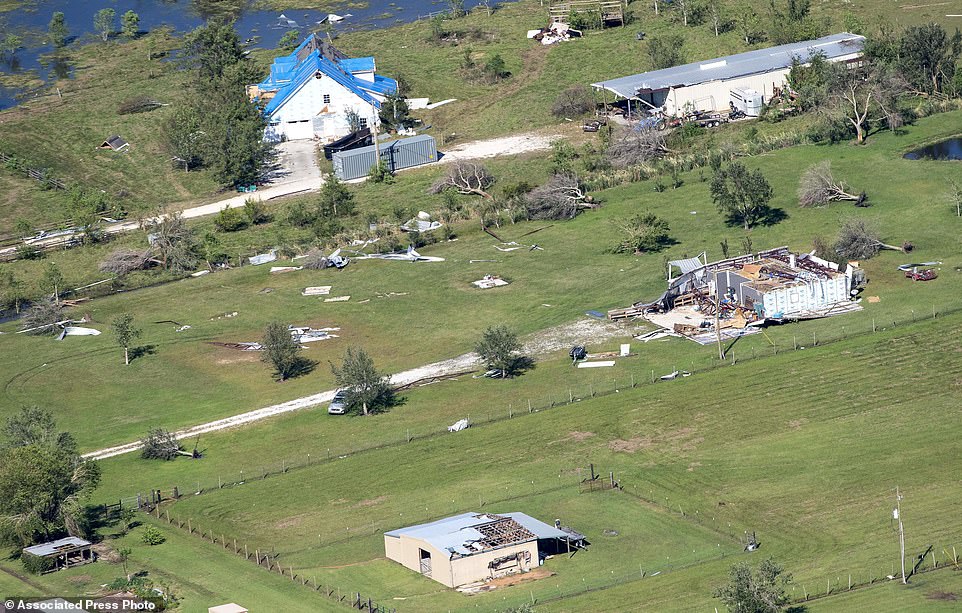 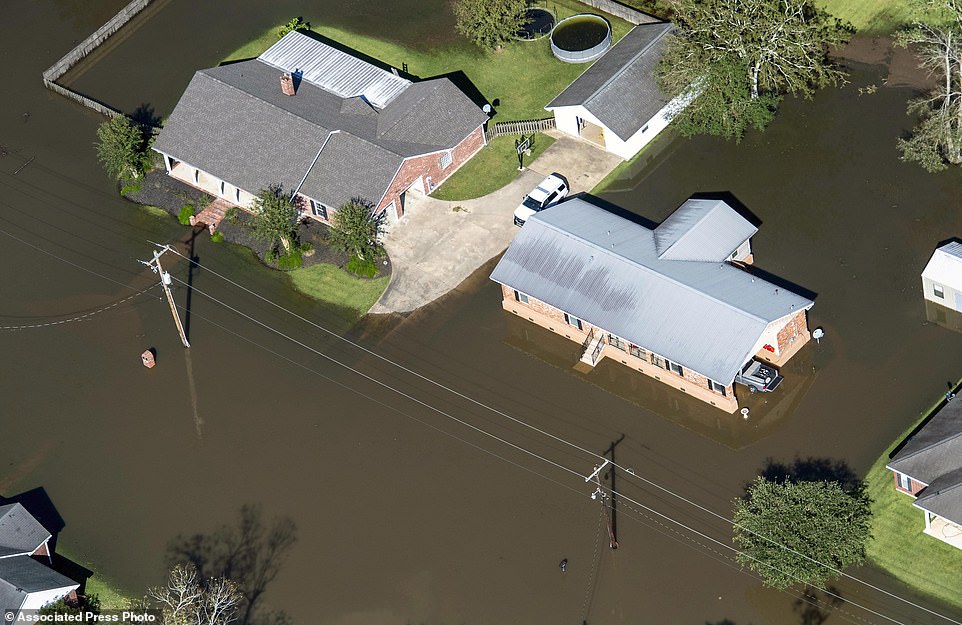 Houses surrounded by flood waters are seen in the aftermath of Hurricane Delta on Saturday in Welsh, Louisiana

Lake Charles Mayor Nic Hunter estimated that hundreds of already battered homes took on water. And people were already exhausted and stressed – for two weeks the Wesleys had been sleeping on their back porch to escape the heat because they had no power.

‘We are very concerned that with everything going in the country right now that this incident may not be on the radar nationally like it should be.’

Before Friday’s storm, the streets were already lines with mountains of debris from the prior storm – piles of soggy insulation, moldy mattresses, tree limbs, twisted metal siding, ruined family treasures.

While Delta was a weaker storm than Category 4 Laura, it inflicted most of its damage with rain instead of wind.

Louisiana Gov John Bel Edwards said it dumped more than 15 inches of rain on Lake Charles over two days and more than 10 inches on Baton Rouge. 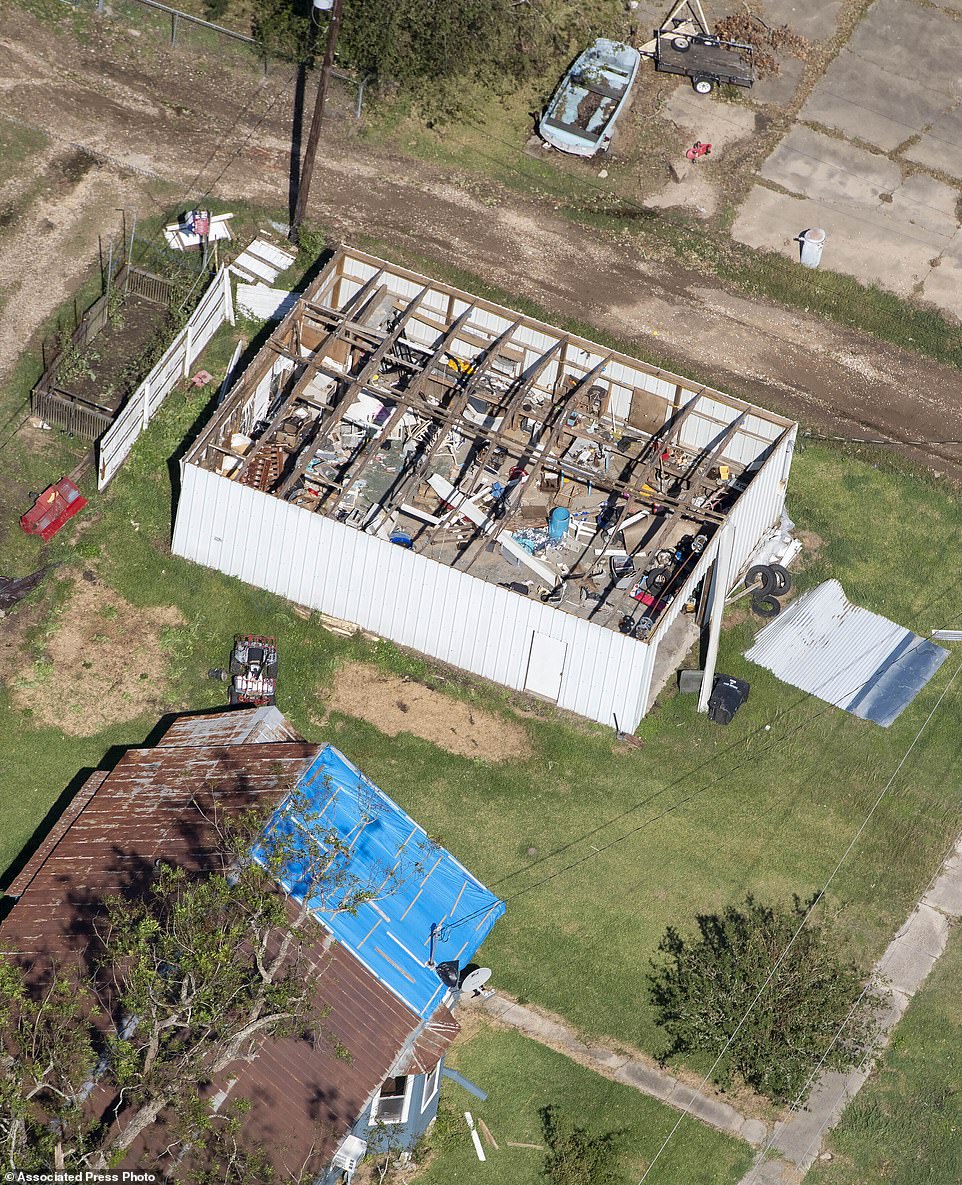 The top of a building was torn off by the hurricane on Friday in Lake Arthur, Louisiana 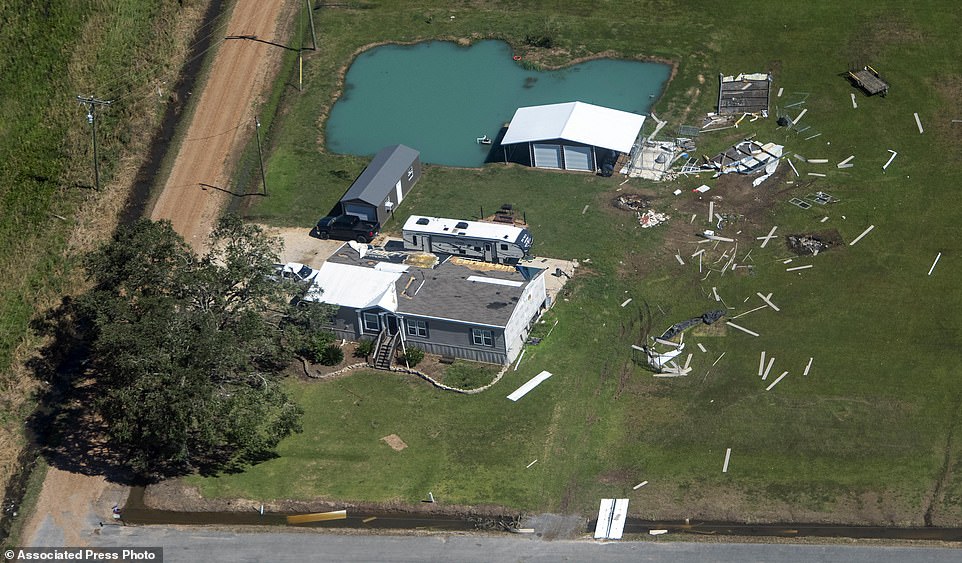 A debris field, fallen tree and structure damage are seen in the aftermath of Hurricane Delta on Saturday in Gueydan, Louisiana 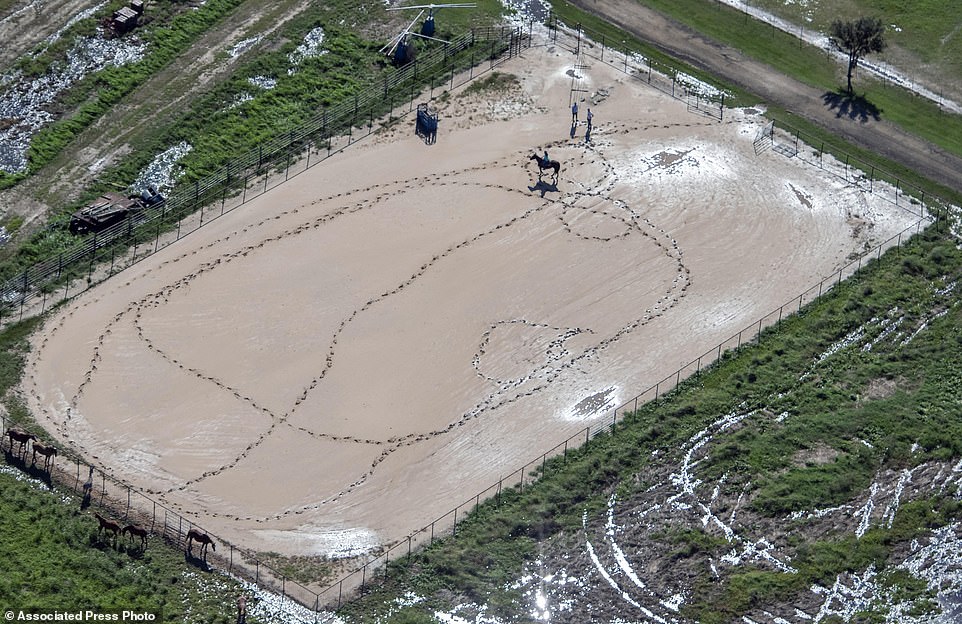 Leaving a trail in the mud, a horse is exercised in the enclosure in the aftermath of Hurricane Delta on Saturday in Welsh, Louisiana

The floodwaters surged up the Wesley family´s front yard, and they were terrified it would pour inside but it stopped short of the door. It carried with it bags of trash and muck, swept up from their neighbors´ piles of debris from the prior storm.

‘The water was something else last night,’ Milton said. ‘We´ve never seen it flood so bad out here, to the point I could have swam out here last night, that´s just how deep it was.’

On Saturday, they joined other southern Louisiana residents starting the routine yet again: dodging overturned cars on the roads, chain-sawing fallen trees, trudging through knee-deep water to flooded homes with ruined floors and no power, pledging to rebuild.

Delta rapidly weakened once it moved onto land and slowed to a tropical depression Saturday. Forecasters warned that heavy rain, storm surge and flash floods continued to pose dangers from parts of Texas to Mississippi.

Forecasters said remnants could spawn tornadoes in Tennessee Valley into Sunday, and flash floods could hit the southern Appalachians. 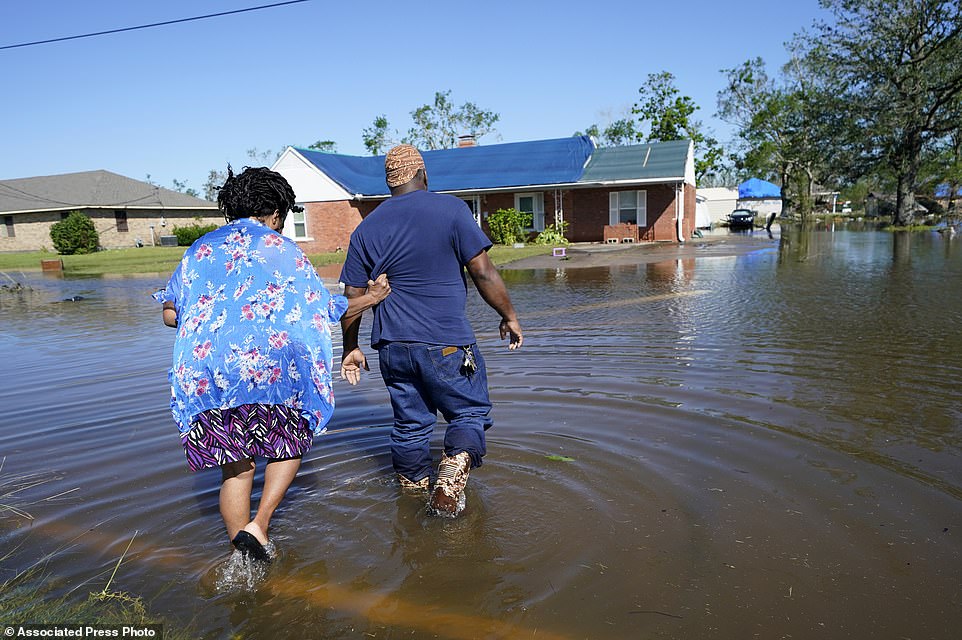 Soncia King holds onto her husband Patrick King in Lake Charles, Louisiana, on Saturday as they walk through the flooded street to their home 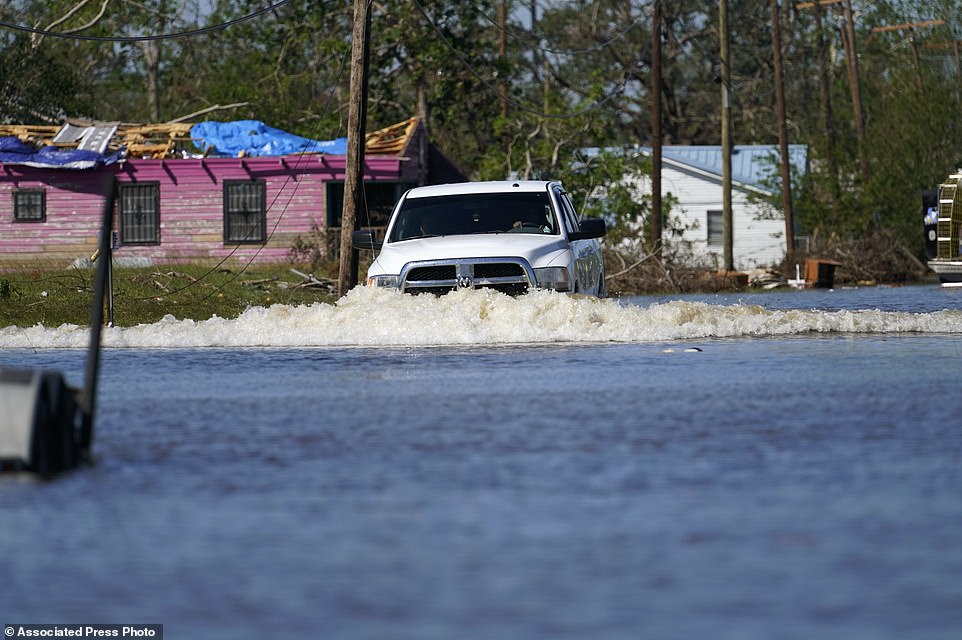 A truck drives through a flooded street in Lake Charles, Louisiana, on Saturday after the hurricane passed through 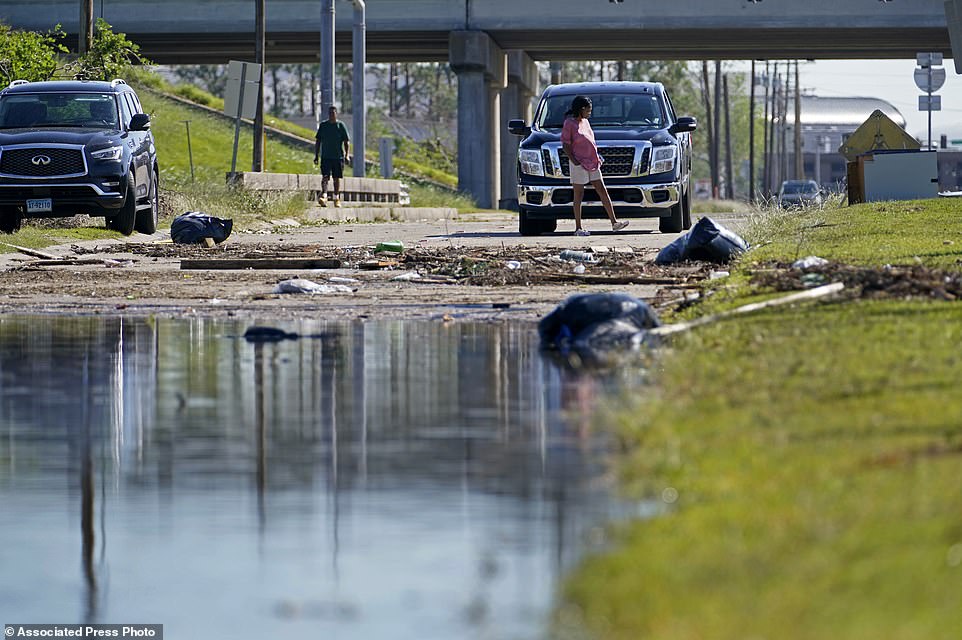 A street is flooded after Hurricane Delta moved through on Friday, in Lake Charles, Louisiana, on Saturday 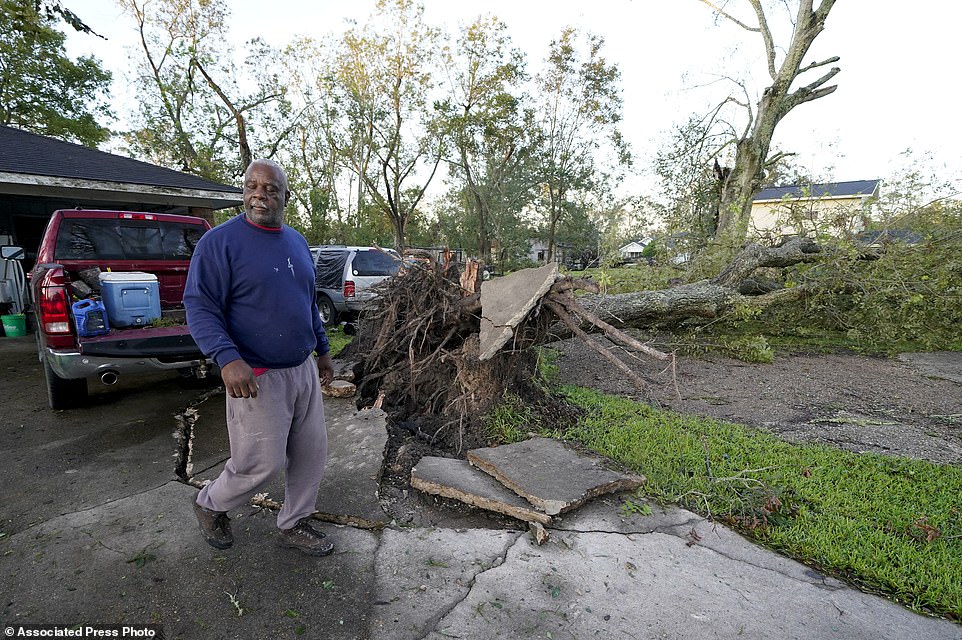 Marcus Peterson walks past a downed tree in his yard after Hurricane Delta moved through, Saturday, in Jennings, Louisiana, Delta hit as a Category 2 hurricane with top winds of 100mph before rapidly weakening over land 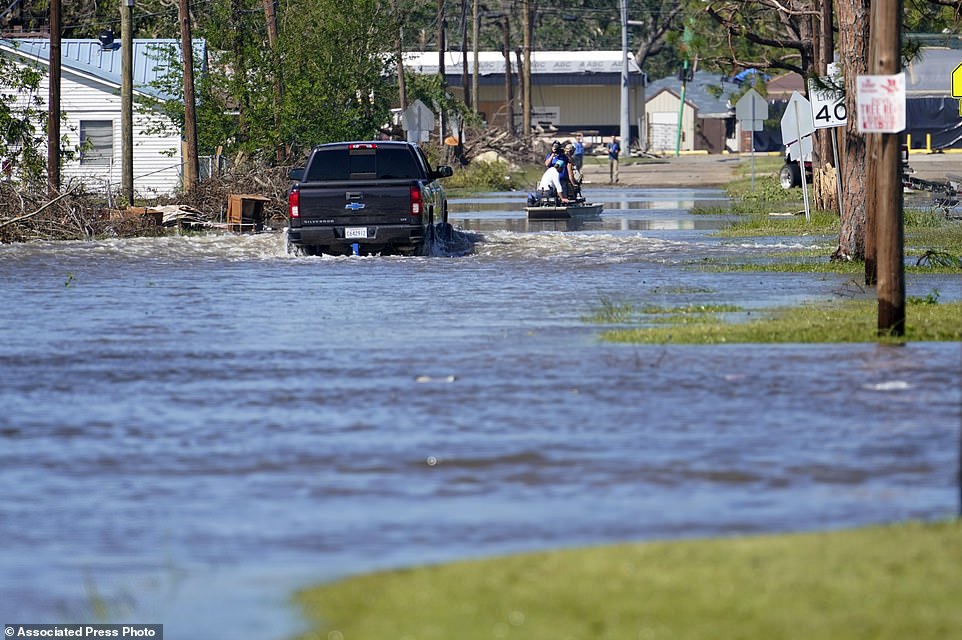 A truck drive through floodwaters in a neighborhood in Lake Charles, Louisiana, on Saturday, after Hurricane Delta moved through on Friday 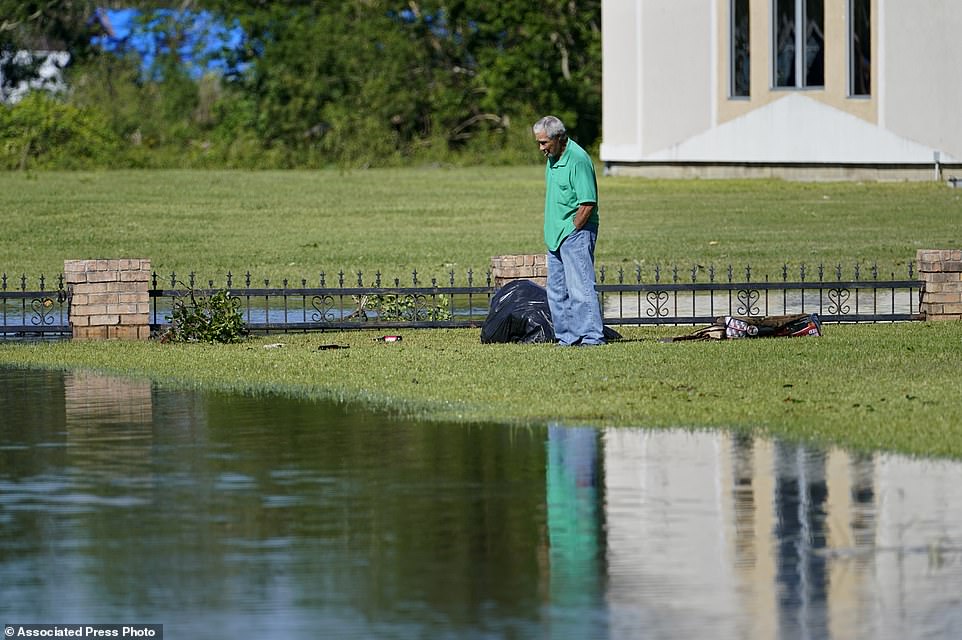 A man stands on his front lawn and looks at the flooded street in Lake Charles, Louisiana on Saturday after Hurricane Delta moved through on Friday

Delta, the 25th named storm of an unprecedented Atlantic hurricane season, was the 10th to hit the mainland US this year, breaking a record set in 1916, Colorado State University researcher Phil Klotzbach said.

The governor said Delta disrupted state efforts to set up temporary housing in southwest Louisiana to bring back Laura evacuees scattered across hotels.

More than 9,400 people were being sheltered by the state Saturday, but only 935 were Delta evacuees, Edwards said. The others were still displaced by Laura.

Many people who had started repairing their homes from Laura saw the work undone overnight and the materials they bought ‘just scattered about because of the wind,’ he said.

‘Again, it’s going to set us back, but it´s not going to dictate our future.’

The the double punch of the storms – on top of the pandemic – has left many reeling, said Lake Charles resident Katie Prejean McGrady.

She was nine months pregnant when she and her family evacuated ahead of Laura. They fled a couple hours north and she had to find a new doctor to deliver her baby. They lost part of their roof, their fence and their swing set.

They arrived back in Lake Charles last weekend and had to evacuate again days later, debris from Laura still in their yard.

‘I’m taxed out. And I think that’s most people in town,’ she said. ‘There’s a mental exhaustion that sets in and then there’s a fear of “Does anybody outside this region care?”‘