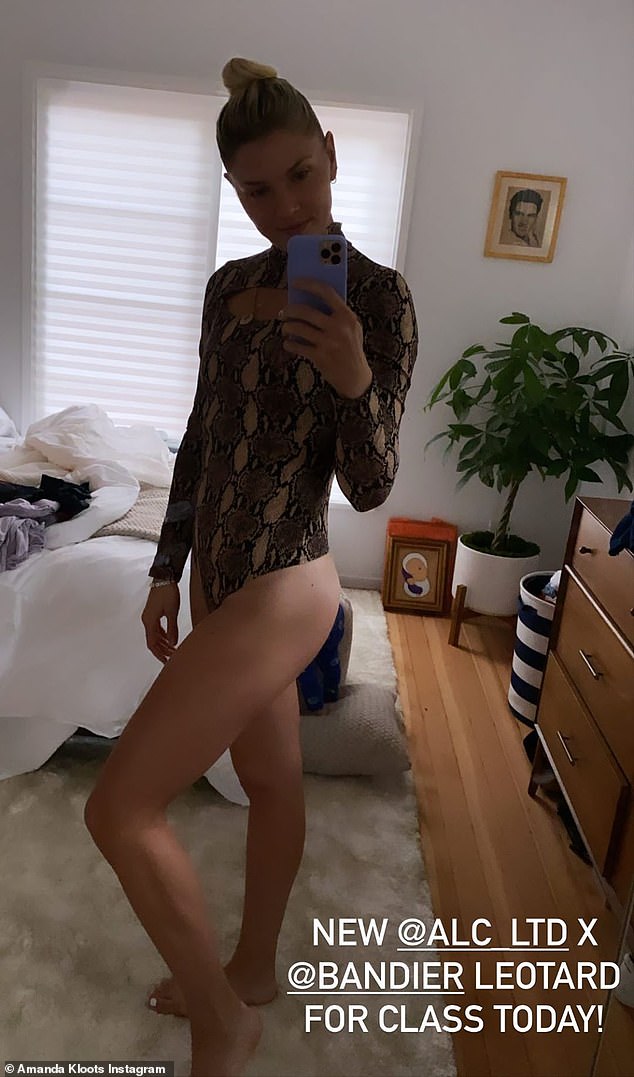 It has been just over three months since Amanda Kloots lost her husband Nick Cordero after a long battle with complications of COVID-19.

On Saturday, Kloots was able to take solace in a day of exercise and fun on the beach with her 16-month-old son Elvis that she shared with the late Broadway star.

And the fitness trainer gave a glimpse at her busy morning and afternoon by posting a slew of videos and pictures on Instagram for her 623,000 followers to see.

Strike a pose: Amanda Kloots, 38, showed off her legs and toned figure in a leotard before heading out to her dance class in Los Angeles on Saturday

The social media flurry all began with clips of Elvis sitting in his high-chair in the kitchen of their lost Angeles home dressed in his blue-patterned pajamas.

About an hour later, Kloots slipped into a black-patterned leotard and posted a selfie snap showing herself striking a pose while flaunting her legs.

She pulled her long blonde tresses into a tight bun during her beauty preps ahead of her dance class later in the morning.

Before heading out, Kloots added a pair of black leggings to her ensemble and struck another pose with Elvis as she held his right hand.

‘Ready to teach. Elvis is in his warmups,’ she wrote across the photo she also shared on her Insta-Story. 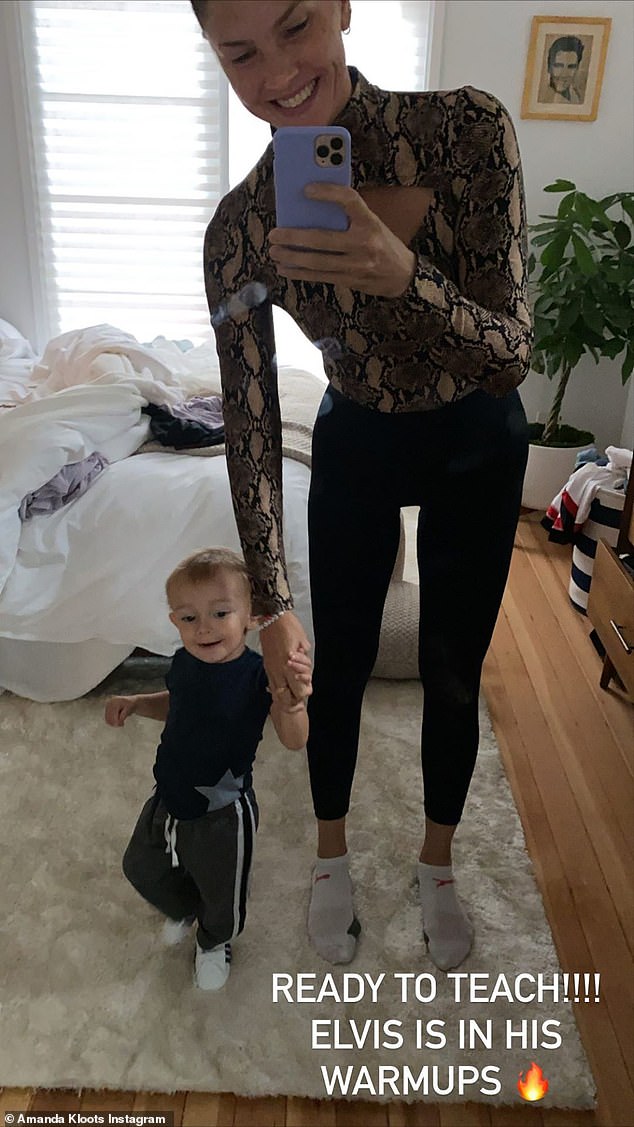 Quality time: The fitness trainer added a pair of black leggings to her ensemble and struck another pose with Elvis as she held his right hand 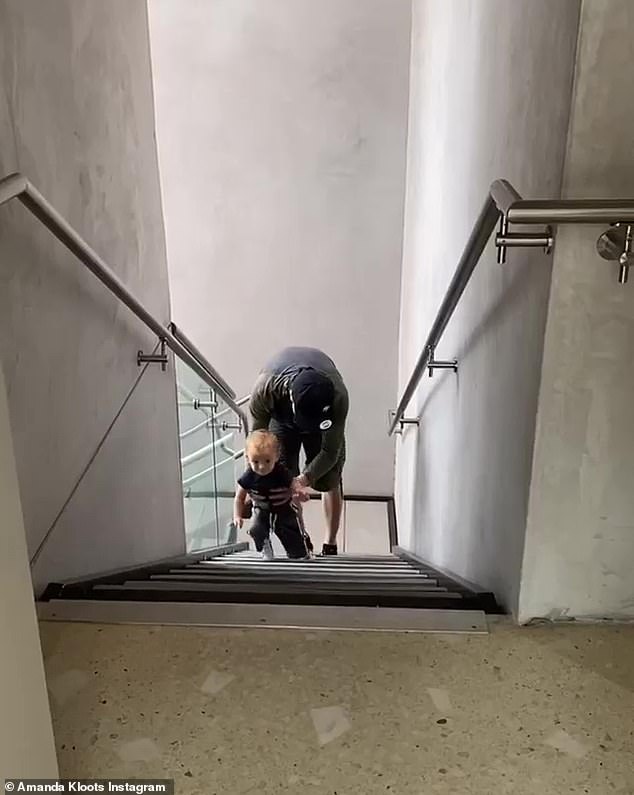 Walk this way: The proud mother cheered her son on as he tried to walk up some stairs with the help of a friend 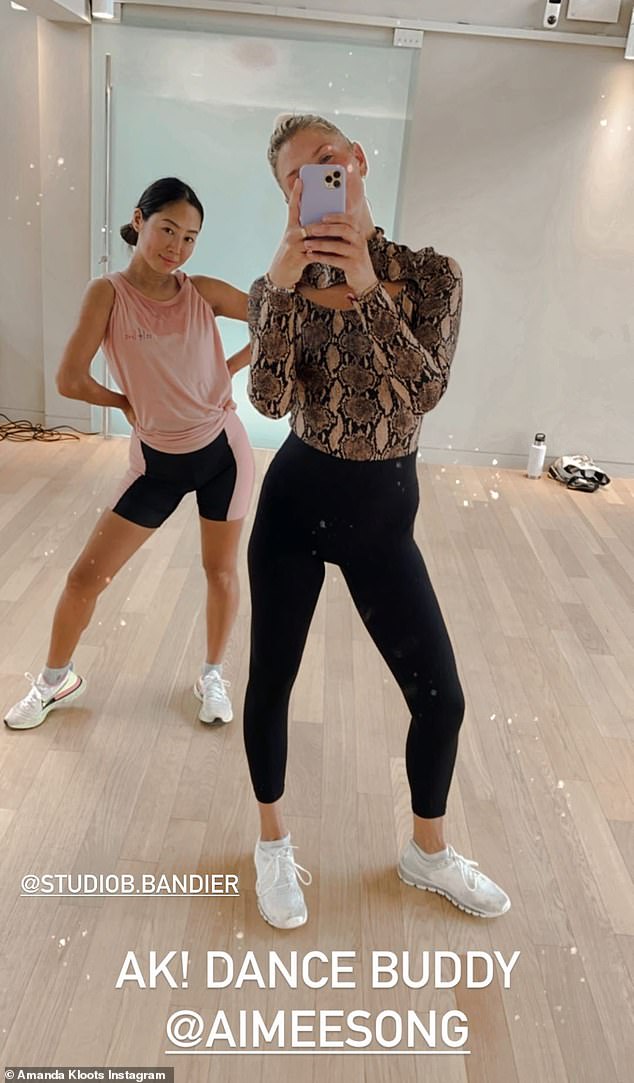 Working it: Kloots also shared a photo taken inside the dance studio 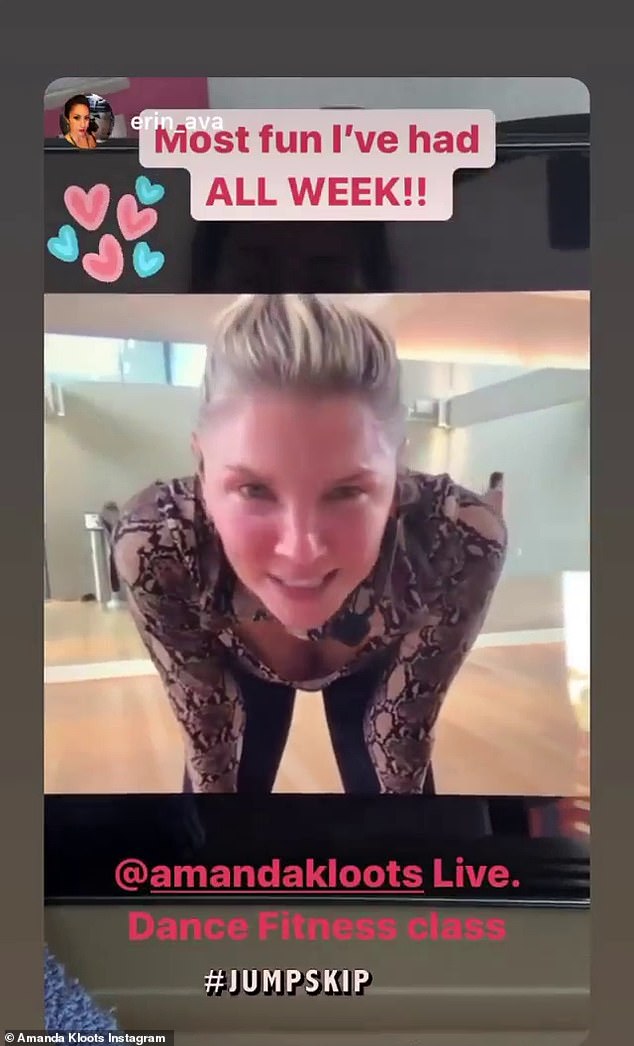 Social media butterfly: While working up a sweat during dance class, Kloots engaged her fans and followers for an Instagram Live hit

Moments later, after apparently arriving at the dance studio, the proud mother got to cheer her little boy on as he tried to walk up a staircase with the help of a friend.

While working up a sweat during dance class, Kloots engaged her fans and followers with an Instagram Live hit.

‘Most fun I’ve had all week,’ she declared as she looked directly into the camera while almost out of breath. 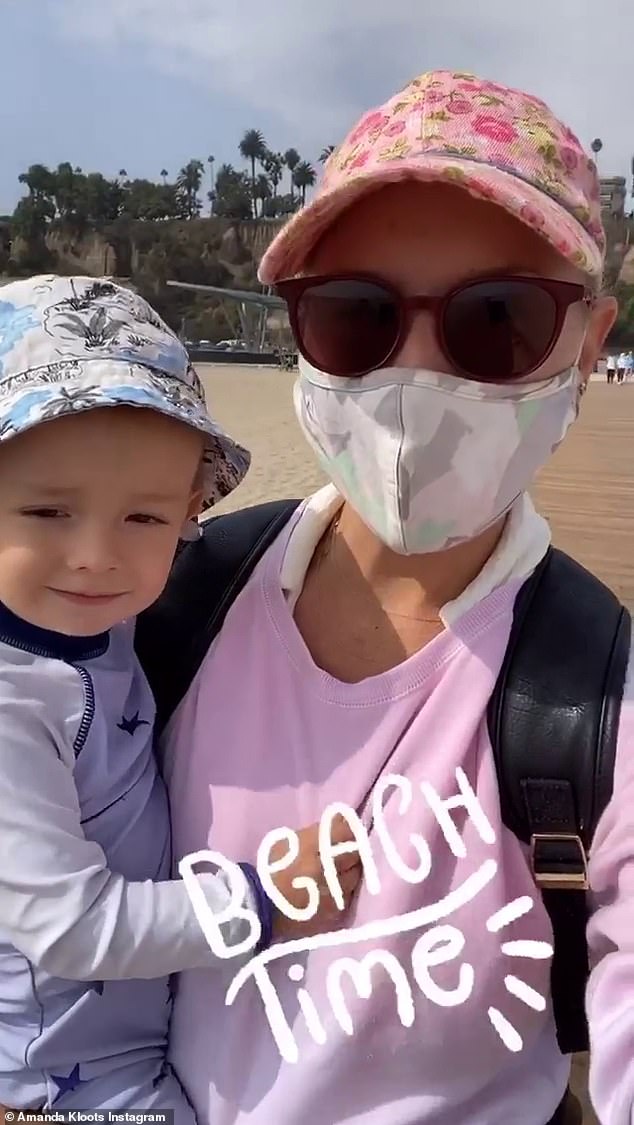 Fun in the sun: After dance class, Kloots made the drive to the beach with Elvis 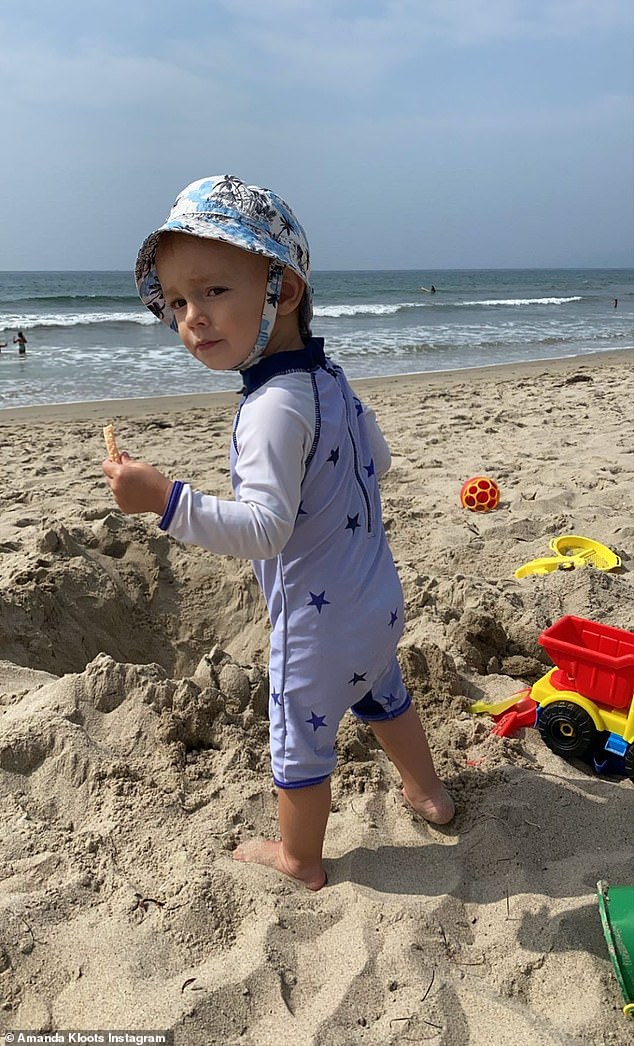 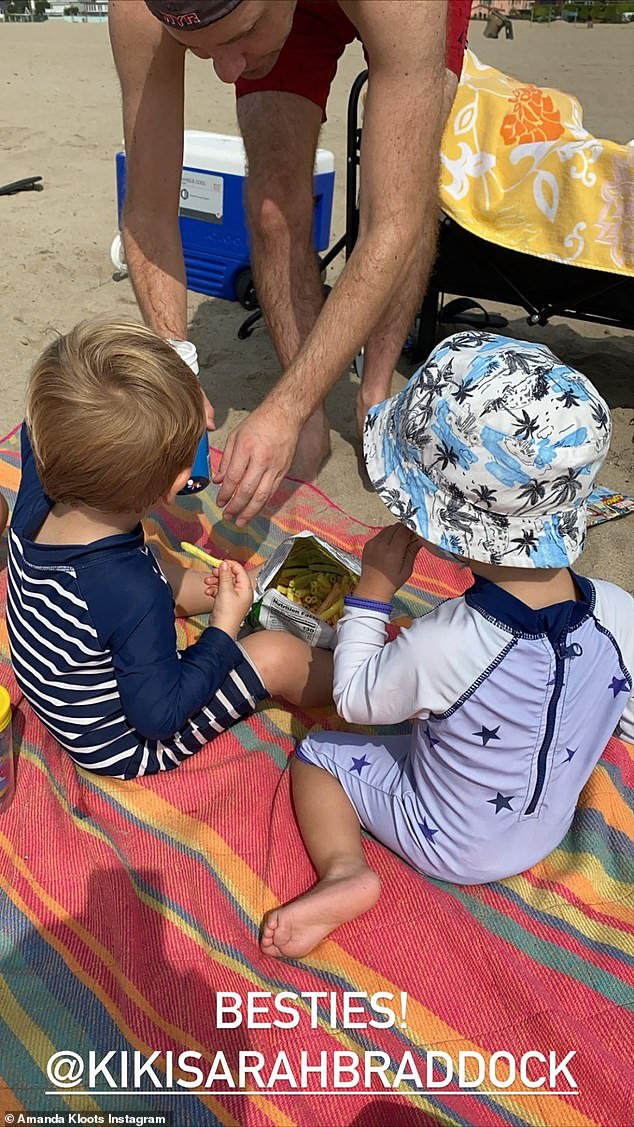 Afternoon delight: Kloots and her son met up with some friends at the beach

By the afternoon mother and son took a ride to the beach where they frolicked on the sand with friends.

Kloots looked nearly unrecognizable wearing a pink baseball cap, dark sunglasses and a pink camouflage mask, in adherence to health and safety protocols due to the coronavirus crisis.

She also donned a pink sweatshirt as part of her casual ensemble she changed into following dance class.

Elvis looked adorable in a light blue onside and floral cap to help protect him from the glaring sun. 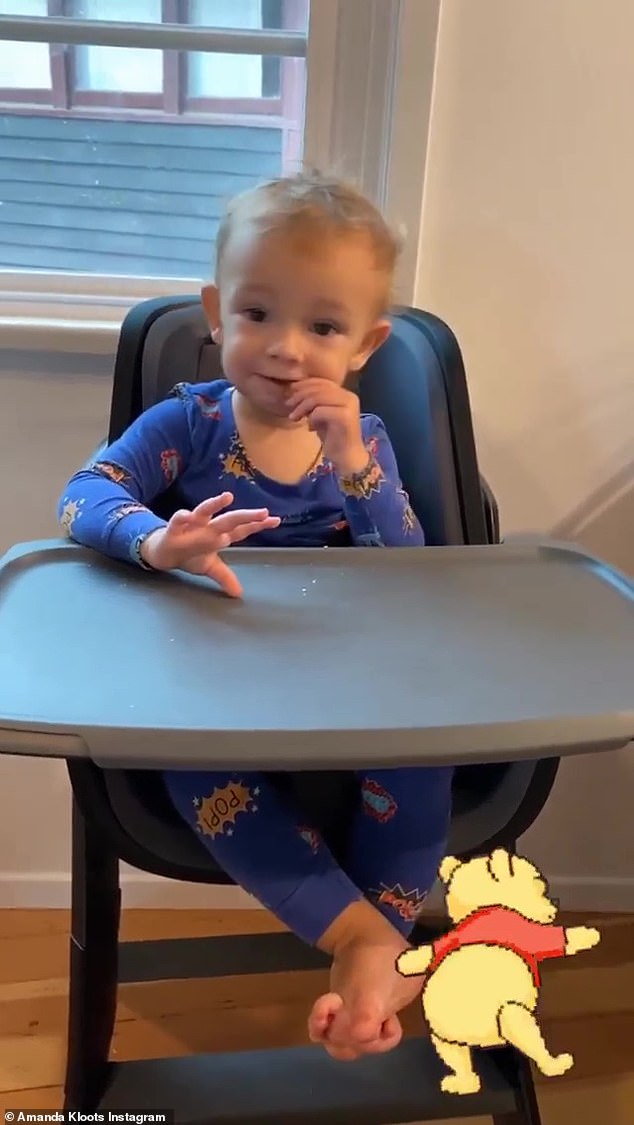 Morning rise: The social media flurry began with clips of son Elvis sitting in his high-chair in the kitchen of their Los Angeles home 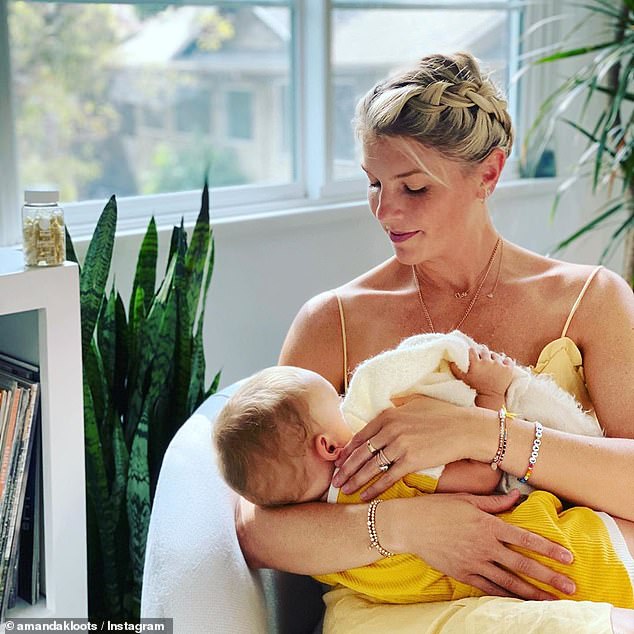 Kloots and Cordero were married in September 2017, with Elvis arriving to the world in June 2019.

The Tony Award nominated singer and actor was diagnosed with COVID-19 in March 2020, around the time it was deemed a pandemic.

She regularly posted updates on his condition and state of their family all through the ordeal on social media.

During his fight for life he suffered from pneumonia, blood-clotting issues that forced doctors to amputate his right leg and severe damage to his lung, among other health hardships.

He eventually passed away on July 5 after 94 days in a Los Angeles hospital. 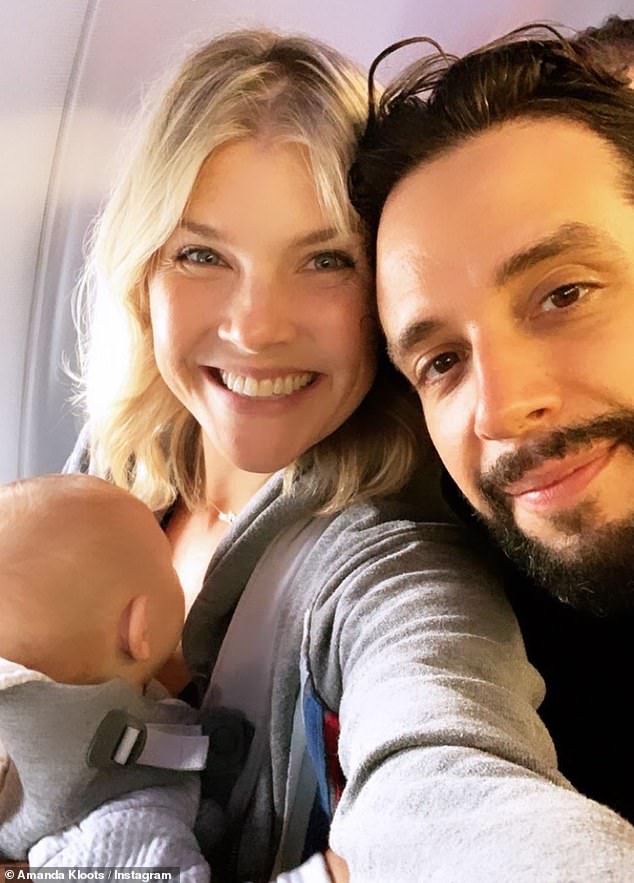 Heartbreaking: Kloots and her late husband Nick Cordero were married in September 2017; they welcomed Elvis to the world in June 2019 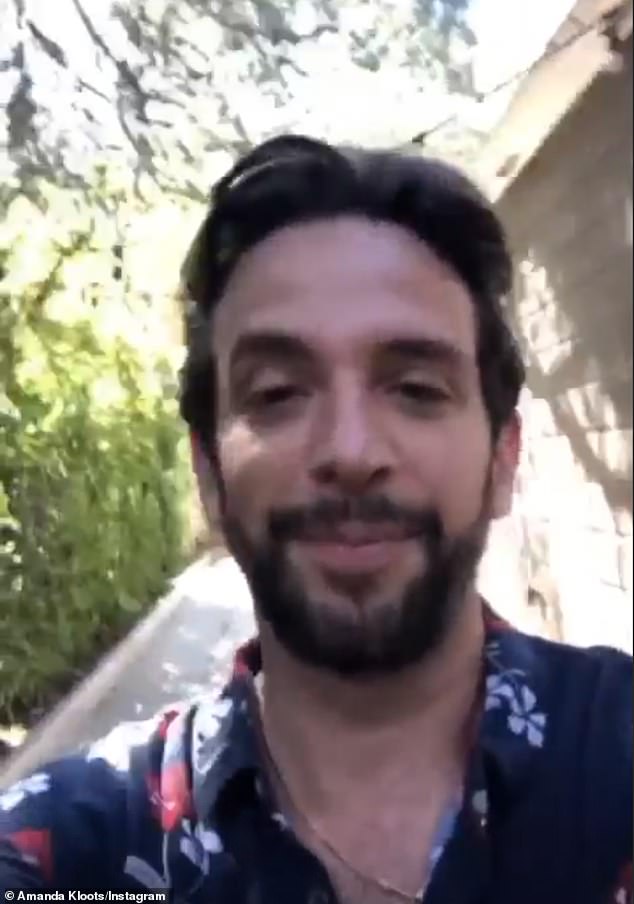 RIP: The Broadway star, 41, passed away from COVID-19 complications on July 5 after 94 days in a Los Angeles hospital