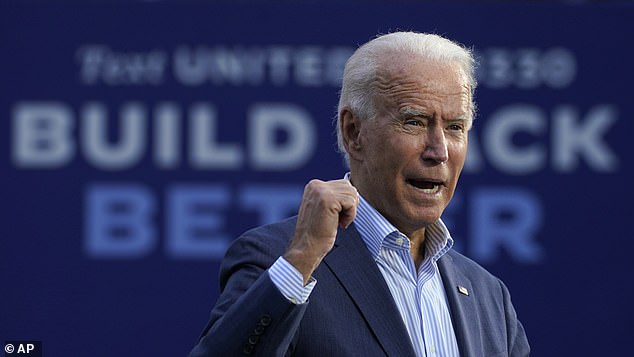 Boris dumps Trump? Downing Street ‘writing off president’s chances of being re-elected in November and turning attention to wooing rival Joe Biden’ amid fears for a US trade deal under Democrat

Boris Johnson’s team have started wooing Democrat US presidential challenger Joe Biden after reportedly giving up on Donald Trump’s chances of being re-elected.

Downing Street are said to have turned their sights to the 77-year-old amid signs that he is developing a commanding lead over Mr Trump in the polls.

With just 22 days to go there are fears for the future progress of talks over a US-UK trade deal that have been carried out by International Trade Secretary Liz Truss.

Mr Biden has previously warned that Mr Johnson’s attempts to undo part of the Brexit Withdrawal Agreement relating to Northern Ireland could see the UK shelve the talks if he is in charge.

Mr Trump has returned to the White House after being briefly hospitalised with Covid-19. Last night he took off his mask and told a crowd of hundreds of fans outside the White House ‘I’m feeling great’ and the coronavirus is ‘disappearing’ in his first public event.

But a senior Tory told the Sunday Times: ‘They’re writing off Trump in No 10 now.’ 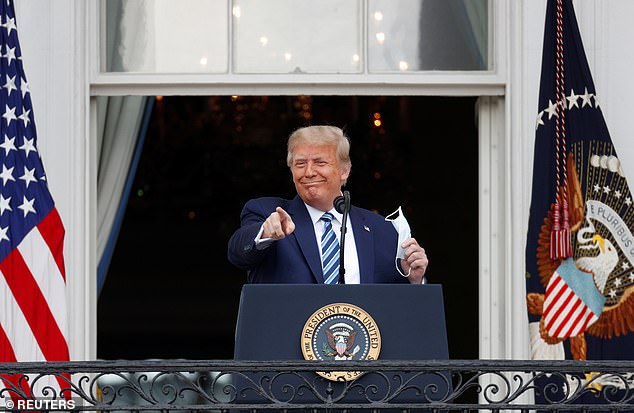 The Internal Market Bill (IMB) allows the Government to unpick sections relating to Northern Ireland’s status after the end of the year.

But in his first direct intervention on the matter since becoming the Democrat challenger Mr Biden warned that the move – which would breach international law if enacted, would threaten the UK-US trade deal currently being negotiated.

The deal has to be ratified by the US Congress and Democrats who control the lower House of Representatives have already threatened to halt its progress.

Mr Biden  tweeted: ‘We can’t allow the Good Friday Agreement that brought peace to Northern Ireland to become a casualty of Brexit. Any trade deal between the US and UK must be contingent upon respect for the Agreement and preventing the return of a hard border. Period.’

But his comments provoked an uproar of anger from Brexiteer Tories.

Mr Trump’s administration has shown more flexibility, although there is disagreement over food safety standards.

During the unusually short speech he laid into ‘sleepy Joe’, claimed he has achieved great things for black communities across America and hit out at Black Lives Matter protesters calling them ‘left-wing fanatics’.

This marks the first major event at the White House since the ‘superspreader’ event in the Rose Garden on September 26 where Trump unveiled Amy Coney Barrett as his Supreme Court pick and at least nine attendees later tested positive for the virus.

It comes as Trump vowed to get back to business as usual after being hospitalized last week for COVID-19, in defiance of social distancing and quarantine rules.