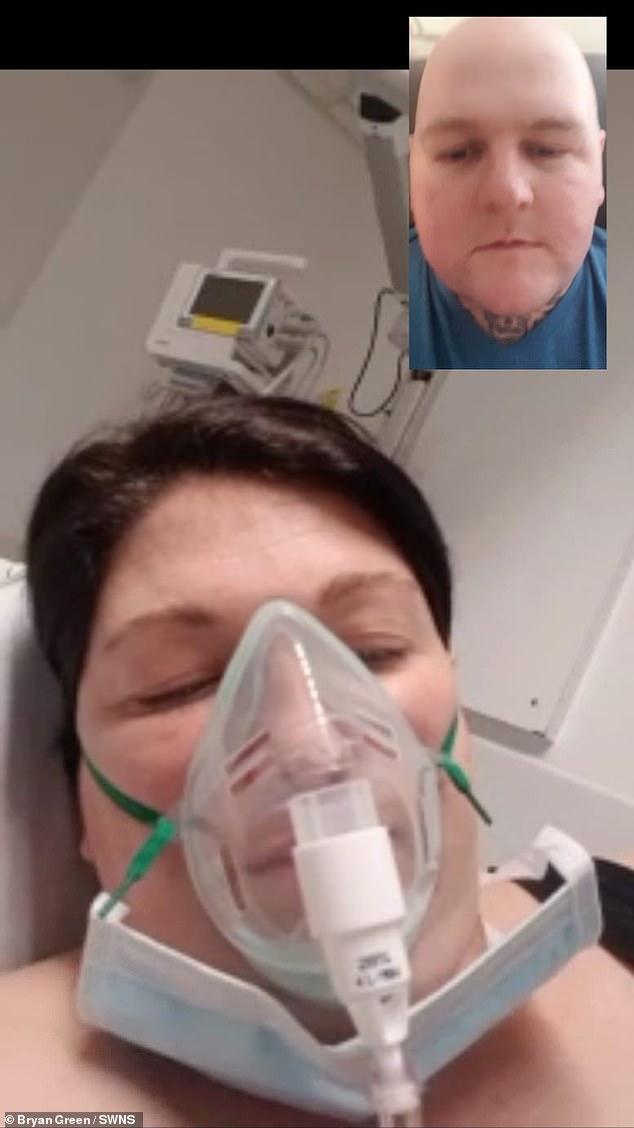 A father-of-five has revealed he was left ‘terrified’ for his pregnant partner’s life after she was placed in an induced coma for 10 days as she battled Covid-19.

Danielle Martin, 32, from Shankill, Belfast, was nine weeks pregnant in March when she was rushed to hospital after struggling to breathe and tested positive for coronavirus.

After her condition deteriorated, she was placed into an induced coma, leaving partner Bryan Green, 32, fearing for the lives of both his partner and unborn child.

Thankfully, Danielle woke from her coma after 10 long days and rang Bryan with the incredible news that they were expecting twins.

And earlier this week, the mother-of-five gave birth to two beautiful girls, Ava and Amelia, with proud father Bryan admitting: ‘It’s definitely a miracle for us. They’re our wee princesses.’

Danielle Martin, 32, from Belfast, was nine weeks pregnant when she was admitted to hospital in March and was placed in an induced coma as she battled Covid-19 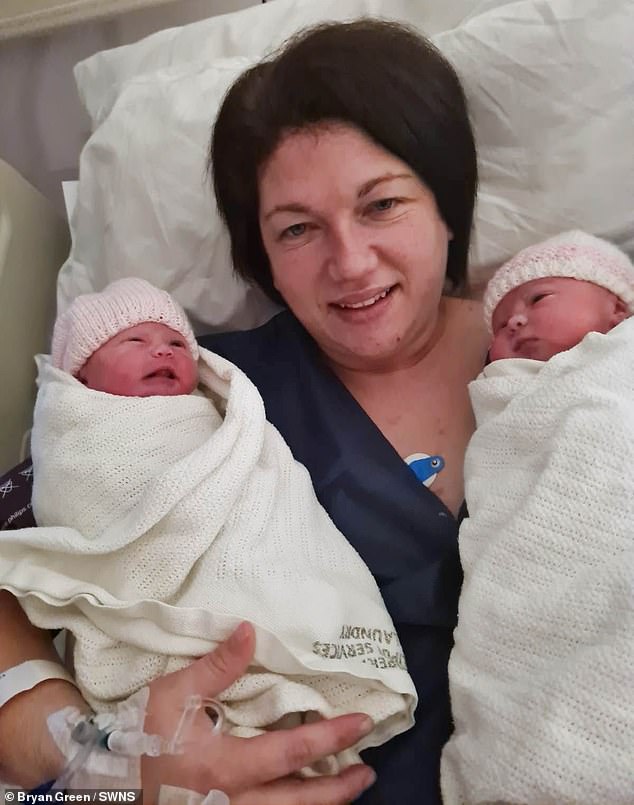 After doctors warned her partner Bryan that she and her unborn child may not survive in March, the mother-of-five has now given birth to twins

Danielle had been admitted to hospital with suspected pneumonia on March 30 after she had suffered with what she thought was a chest infection.

She said: ‘At first, I just had a sore throat which led to a bad chest and I thought it must be a chest infections but I could barely breath after six days.

‘It felt like I was suffocating so Bryan decided to call an ambulance who came within five minutes and took me away – I was terrified.

‘I felt bad leaving my boys but I knew it was for the best – they did scans and diagnosed me with severe pneumonia. 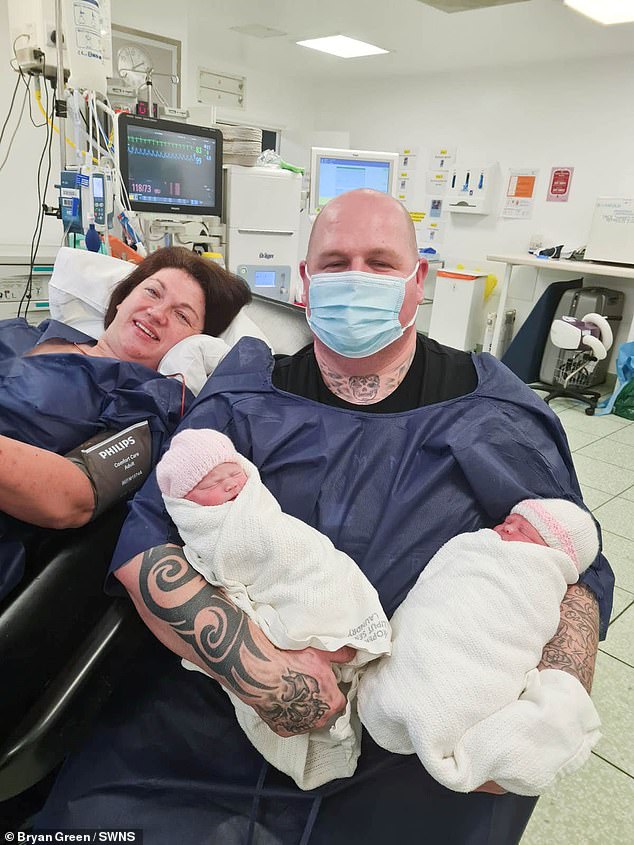 After the mother-of-five gave birth to two beautiful girls, Ava and Amelia, proud father Bryan said it felt like ‘a miracle’

‘I was put on a ventilator which helped and I was managing – I was struggling to breath and talk – it was terrifying.’

A positive coronavirus test changed the diagnosis and she was placed into an induced coma after her oxygen levels dropped.

Bryan, who works as a security guard, said he didn’t even realise doctors were putting her into a coma.

He said: ‘I talked to her the night before on the phone and she was eating toast in bed although she could barely speak and we thought she had severe pneumonia. 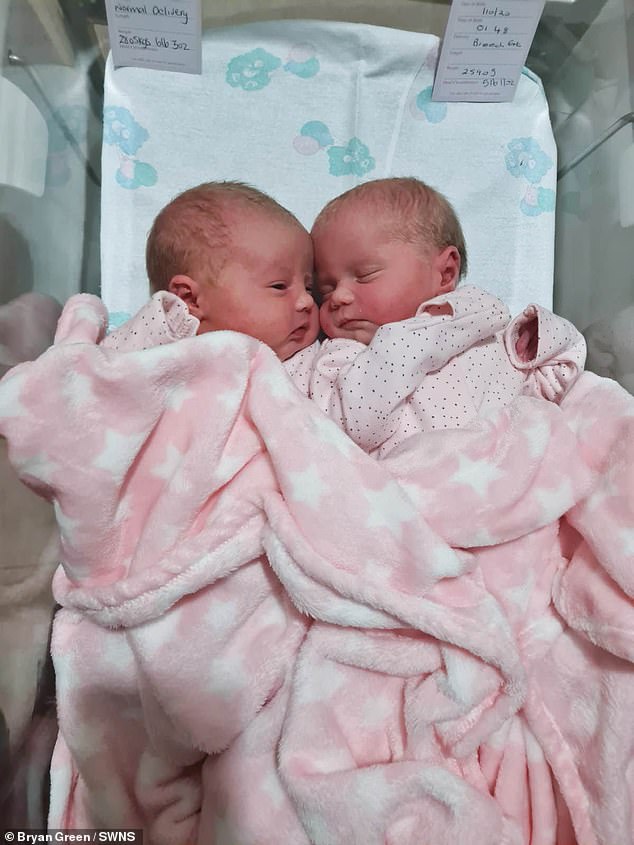 On the morning of October 7, Danielle gave birth to two girls, Ava and Amelia, who join older brothers Jaiden, nine, Parker, three, and Joshua, two, in Danielle and Bryan’s household

‘She said she was going to try and get her head down and then the next morning I didn’t hear from her which I thought was strange.

‘I rang the hospital to say I needed to get in touch with my partner and a consultant came on the phone to tell me they’d rushed her up to the theatre and put her in a coma.’

He continued: ‘I was just speechless on the phone, I didn’t know what to say, it was madness.

‘I hung the phone up and just broke down into tears. It was really scary.’ 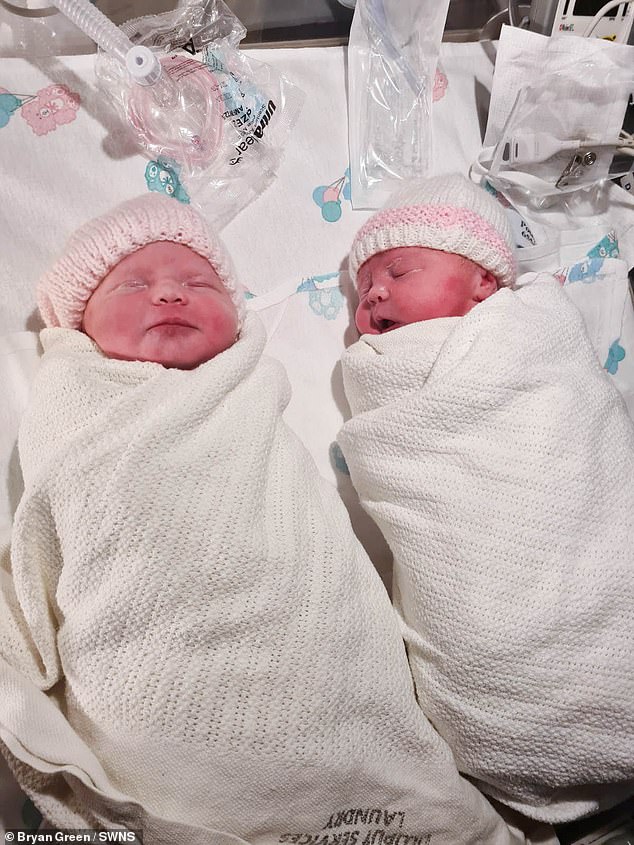 Doctors warned Bryan that it was ‘highly unlikely’ that his unborn baby would survive Danielle’s battle with coronavirus.

However, 10 days later and Danielle woke from her coma and rang Bryan to tell him  they were expecting twins.

He said: ‘The doctors rang me to say she was out of the coma and being moved to the ward which was amazing, it was such a relief.

‘I got to speak to her on the phone and asked her about our baby straight away but nothing prepared me for when she said there’s two babies in there!’

‘I couldn’t believe it and I still can’t to this day, even though I’m looking at them in front of me right now sleeping, it’s unbelievable!

With five children now to look after, Bryan has said that his and Danielle’s home will feel a bit like a ‘mad house’

‘There were tears all around that day – I was down my mother’s house and we were all crying.’

On October 7, Danielle gave birth to two healthy baby girls, Ava and Amelia and they are now settling in at home alongside their older siblings Jaiden, nine, Parker, three, and Joshua, two.

Bryan said: ‘I’m loving having the girls home even though I haven’t been sleeping because I can’t stop staring at them!

‘We’re just so happy that everything has turned out ok after such a rocky start and that our family is finally together happy and healthy at home.’

With five children, Bryan admitted that their home will feel a bit like a ‘mad house’.

Pregnant women who catch Covid-19 are HALF as likely to have symptoms but at greater risk of needing intensive care, international studies find

Pregnant women are less likely to show symptoms of Covid-19 but more likely to end up in intensive care than women who aren’t expecting, a study has found.

How the coronavirus affects pregnant women has been unclear throughout the worst of the pandemic and they were put onto the shielding list as a precaution.

Research done by a team called the PregCOV-19 Living Systematic Review Consortium, led by the University of Birmingham’s Professor Shakila Thangaratinam found pregnant women were half as likely to have symptoms.

They looked at 77 studies already done on the effects of Covid-19 which included 11, 432 women who had been admitted to hospital and diagnosed with the viral disease.

The review found the pregnant women in hospital with coronavirus were 57 per cent less likely to have symptoms, but 62 per cent more likely to end up in intensive care.

In addition, there was an 88 per cent higher chance of them ending up on a ventilator.

The NHS says that there is no evidence pregnant women are at any greater risk of becoming dangerously ill from coronavirus but were placed on a watchlist because they are more susceptible to catching viruses like the flu.

They also make clear that there is no evidence that having coronavirus causes miscarriages or affects the development of a baby during pregnancy.