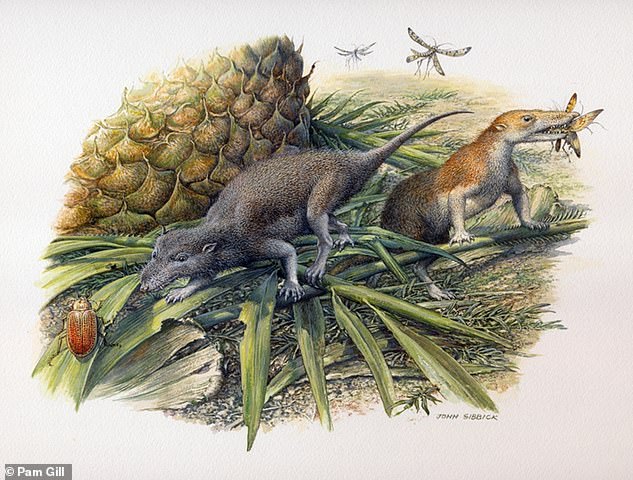 Mammals run hotter, use more energy and live shorter lives than reptiles, but it wasn’t always like that, according to a new study.

Research has found that the first mammals to ever evolve, around 200 million years ago, were lethargic individuals that moved at a slow pace, like snakes and lizards.

Life in the slow lane allowed these mice-sized creatures to live far longer than their modern-day equivalents.

Growth rings hidden in fossilised teeth of two ancient species, Morganucodon and Kuehneotherium, that roamed south Wales during the Jurassic period were analysed with high-resolution x-rays for the study.

It reveals the early mammals lived for up to 14 and nine years, respectively, whereas extant mammals have a maximum lifespan of around three years.

Growth rings hidden in fossilised teeth of two ancient species, Morganucodon and Kuehneotherium, (pictured, artist’s impression) that roamed south Wales during the Jurassic period were analysed with high-resolution x-rays for the study

The results, published in Nature Communications, indicate the evolution of mammals into today’s fauna was a much slower process than previously believed.

Dr Elis Newham, research associate at the University of Bristol, said he was ‘dumbfounded’ by the results as the team had anticipated the lifespans would be between one to three years.

Dr Newham, research associate at the University of Bristol, said: ‘It was thought the key characteristics of mammals, including their warm-bloodedness, evolved at around the same time.

‘By contrast, our findings clearly show that, although they had bigger brains and more advanced behaviour, they didn’t live fast and die young but led a slower-paced, longer life akin to those of small reptiles, like lizards.’

The research, led by the University of Bristol, is the first time palaeontologists have been able to study the physiologies of early fossil mammals directly.

Researchers studied growth rings in the tooth sockets – deposited each year like tree rings – that could be counted to reveal how long the animals lived.

Dr Pam Gill, senior research associate at the University of Bristol, used detailed X-ray scans to look at the cementum, a material which grows throughout an animal’s life.

Its role is to fix in place tooth roots into their socket in the gum, but its continual growth creates layers, similar to tree rings, which can be used for working out the age an animal was when it died.

An ancient tooth specimen belonging to Morganucodon was sent to Dr Ian Corfe from the University of Helsinki for an initial test.

This infographic reveals what the researchers from the University of Bristol found. Ancient mammals lived longer than modern ones, and it is likely due to a slower pace of life more akin to reptiles, despite the mammals being warm-blooded and having bigger brains 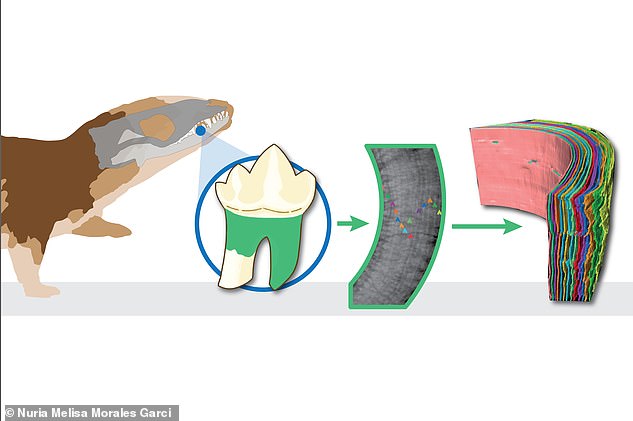 The scientists used detailed X-ray scans to look at the cementum (green), a material which grows throughout an animal’s life. Its role is to fix in place tooth roots into their socket in the gum, but its continual growth creates layers (right), similar to tree rings, which can be used for working out the age an animal was when it died

‘To our delight, although the cementum is only a fraction of a millimetre thick, the image from the scan was so clear the rings could literally be counted,’ Dr Corfe said.

Morganucodon and Kuehneotherium fell into caves and holes in the rock where their skeletons, including their teeth, fossilised.

‘Thanks to the incredible preservation of these tiny fragments, we were able to examine hundreds of individuals of a species, giving greater confidence in the results than might be expected from fossils so old,’ Dr Corfe said.

Researchers used 200 teeth specimens which were provided by the Natural History Museum in London and University Museum of Zoology in Cambridge.

They were transported to either the European Synchrotron Radiation Facility in France or the Swiss Light Source in Switzerland to undergo their X-ray analysis.

These institutes have some of the brightest x-ray machines in the world, allowing for extremely detailed images to be created without damaging fossils.

Teeth act like tree rings and store intimate details about an individual’s life, a study has found.

The research by American scientists found a material in teeth called cementum develops a fresh layer every year.

Studying subtle changes in its growth can provide key details such as when an individual was pregnant, seriously ill or incarcerated. It can also tell how old a person or animal was when it died.

Cementum is a dental tissue that covers the tooth’s root and fixes it in place in the gum and it grows a new layer roughly every year.

The cementum’s microstructure is visible only through microscopic examination.

Analysis can reveal the underlying organisation of the fibres and particles that make up the material of this part of the tooth.

The microscopic layers can be illuminated using a variety of laboratory methods, including high-resolution x-rays

Each layer has slightly different structure as the body forms the cementum .

When the body is under strain, the structure is very different to under normal conditions.

How the body is under strain can also be determined as well as when.