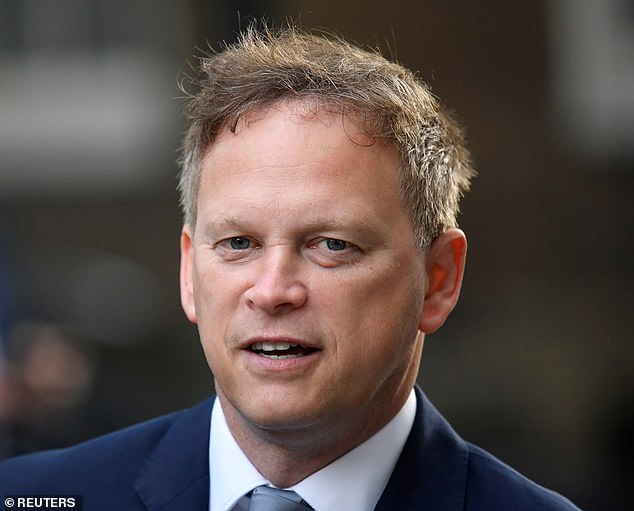 Quarantine for people returning to the UK will be slashed to seven days under a radical overhaul of the Government’s coronavirus travel ban.

Grant Shapps told the virtual ABTA travel industry conference today that travellers will self-isolate at home and take a Covid test a week after landing.

The Transport Secretary ruled out testing on arrival at UK airports and ports, adding: ‘We’re proposing a domestic test regime, where people land and wait a week, have a test and get early release.’

The test will need to take place ‘in person,’ he said, and will be provided by the private sector, in order to prevent putting additional strain on the NHS. Mr Shapps added the test will be paid for by the traveller.

‘We’re also proposing an internationally recognised system, in which Britain would be a trailblazer, where tests and isolation take place prior to travel and after travel and would require no quarantine,’ Mr Shapps said.

He added that he believed the measures described ‘will result in significantly more people flying in the months ahead’.

Anyone arriving in the UK from overseas must currently self-isolate for 14 days unless they have travelled from an exempt destination.

Travellers will self-isolate at home and take a coronavirus test a week after landing under new plans to reduce the travel quarantine, Grant Shapps said today

However, the Transport Secretary stopped short of providing a start date for the planned testing scheme, according to The Daily Telegraph.

Mr Shapps announced the launch of the Global Travel Taskforce last week. The group will be jointly chaired by Mr Shapps and Health Secretary Matt Hancock, and will look at how a testing operation could be rolled out.

It will consult with the aviation, travel, healthcare and coronavirus testing sectors, and is expected to make initial recommendations next month.

The Transport Secretary did not today specify during the ABTA convention which day a coronavirus test would be taken on.

UK visitors to Italy MUST take a Covid test

Minister of health Roberto Speranza announced that arrivals from European countries ‘at greater risk for Covid-19’ – such as the UK, France and Spain – must provide evidence of a negative test taken in the 72 hours prior to travel.

Visitors unable to provide proof of a negative result at the border have to take a test in Italy.

Some airports offer free tests, while others may cost around £11. Travellers will not be allowed to leave until they have received their result.

Anyone who tests positive is quarantined until two consecutive negative results are recorded.

Italy trialled a coronavirus swab test in July that can give results in as little as 15 minutes.

Health chiefs in Rome hope the rapid diagnostic test, made by South Korean firm SD Biosensor, will be used at airports to screen tourists for the infection.

It has already been used on 1,000 people in the northern region of Veneto giving an incorrect result twice, in comparison to the standard swab test.

The UK’s travel sector has repeatedly called for testing at airports to be introduced as a way of reducing quarantine periods for those who get a negative result.

The chief executives of Heathrow Airport, Manchester Airports Group, easyJet and Virgin Atlantic said in a joint statement that the creation of the task force represented a ‘step in the right direction’.

Mr Shapps said: ‘The current measures at the border have saved lives.

‘Our understanding of the science now means we can intensify efforts to develop options for a testing regime and help reinvigorate our world-leading travel sector.

‘This new task force will not only help us move towards safer, smoother international travel as we continue to battle this virus but will also support global connectivity – helping facilitate more Covid-secure travel whilst protecting the population from imported cases.’

Health Secretary Matt Hancock said: ‘It is vital we do everything we can to control the spread of the virus and our measures at the borders are designed to help keep the country safe, by preventing imported cases of Covid-19.

‘We know how these measures have a significant impact on people’s lives and on the travel and tourism industries, so we are working hard across Government to explore ways to open up international travel in a safe way.’

Work is ongoing with the help of industry, clinicians, health experts and the private testing industry to develop an effective approach.

A Department for Transport spokesman said: ‘The Global Travel Taskforce is working at pace to establish how a testing model could be implemented in the UK.

‘As part of this work, the Taskforce will consider what day that testing should be taken on, informed by public health analysis of when this would be effective and taking into account economic and other factors.’

Last week Mr Shapps announced that travel from Lesvos, Tinos, Serifos, Santorini and Zakynthos will no longer require self-isolation upon arrival in England. He also revealed that no countries are being added to the ‘red list’ this week.

The week before, Mr Shapps added Turkey and Poland to the quarantine list as well as the Caribbean islands of Bonaire, St Eustatius and Saba.

The Transport Secretary tweeted : ‘TRAVEL CORRIDOR UPDATE: We are ADDING Lesvos, Tinos, Serifos, Santorini and Zakynthos to the #TravelCorridor list this week.

‘From 4am Saturday 10th Oct, if you arrive from those Greek islands, you will NO LONGER need to self-isolate. We are not REMOVING any countries.’

He added: ‘REMINDER: You MUST complete a Passenger Locator Form by law if you enter the UK from ANY location (travel corridor or otherwise) to protect public health and help keep everyone safe.’

During the ABTA convention, Mr Shapps also admitted that flights between the UK and the EU could be grounded when the Brexit transition period ends.

The Cabinet minister said it is ‘critical’ that air links are not severed, stressing the ‘mutual importance of aviation and travel’.

Both sides agreed prior to the first scheduled Brexit date of March 29 last year that flights would continue for 12 months even if no trade deal was reached.

But Mr Shapps revealed that the UK is still waiting to hear if the EU will consider a similar scheme for the end of the transition period on December 31.

Post-Brexit trade talks are continuing between the UK and the EU, with Prime Minister Boris Johnson wanting to know if an agreement is possible by Thursday.

Mr Shapps said: ‘Negotiations, as you know, have been intensified in recent weeks and although time is now tight we remain hopeful that an agreement can be achieved.

‘But in order for there to be agreement on transport issues, there will need to be an agreement on all of them, and important work remains to be done.

‘Of course, it’s critical that flights between the UK and the EU can continue to operate as normal at the end of the transition period, regardless of the outcome of these negotiations.

‘That’s why we expect the EU to bring forward contingency measures as done before to ensure flights will continue if negotiations are unsuccessful.

‘Of course, we will look to reciprocate that.’

He said: ‘A year ago when we were coming up to potentially no deal, we had a sort of standstill agreement that for a year, whatever the outcome, aviation rights to be able to fly back and forth to Europe would be in place.

‘What the Secretary of State was suggesting was we’re waiting for a proposal from Europe that that will be the case, and if it is we will reciprocate.’

If people are ‘not sure that the flights will fly’ it will be ‘another deterrent’ against booking, Mr Tanzer said.

Tim Alderslade, chief executive of trade body Airlines UK, said: ‘Both sides have always maintained that they want connectivity between the UK and EU to continue and we expect this to be the case because of the mutual importance of aviation and travel to both the UK and EU.

‘In the event of a no-deal scenario there is precedent from the 2019 no-deal regulations that would have protected air travel in both directions.’