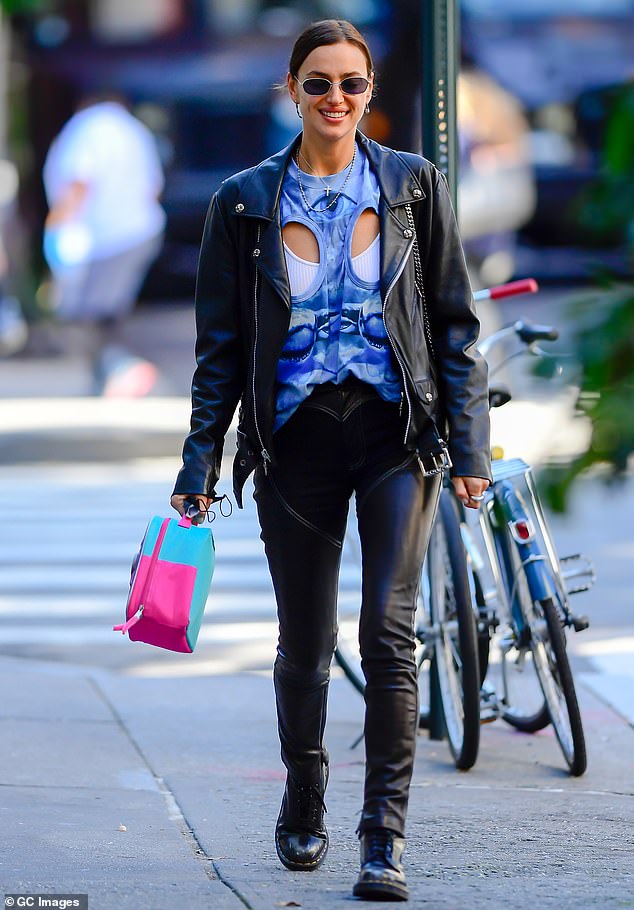 Supermodel Irina Shayk knows how to make a fashion statement.

On Wednesday, the Russian-born stunner was spotted taking her three-year-old daughter, Lea, out for a stroll in the SoHo neighborhood of New York City while rocking a very edgy outfit.

The 34-year-old looked every bit the biker babe as she strutted around in a full black leather look while flashing a smile.

Biker babe: Irina Shayk, 34, put on an edgy display as she strolled around SoHo with three-year-old daughter, Lea. The Russian-born supermodel, rocked a full leather look as she strutted her stuff in NYC 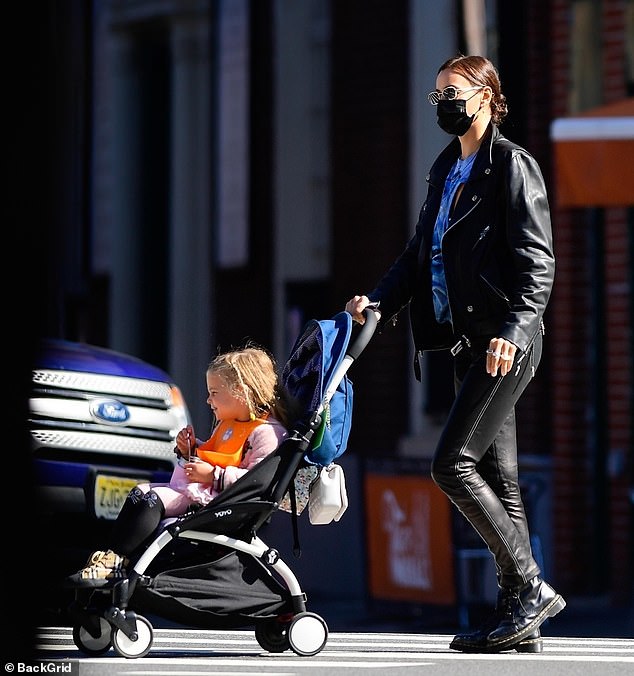 Strolling: The cover girl pushed Lea in her stroller, as the toddler looked to be having a grand time in a stylish outfit

She matched the pants with a stylishly oversized leather jacket, that featured silver hardware and a belt.

Adding to the already cool look, Irina rocked a blue printed t-shirt with intentionally placed holes that fell just above her bust.

She French tucked the shirt, which featured graphics like an eye and two sharks, into the pants as she strolled. 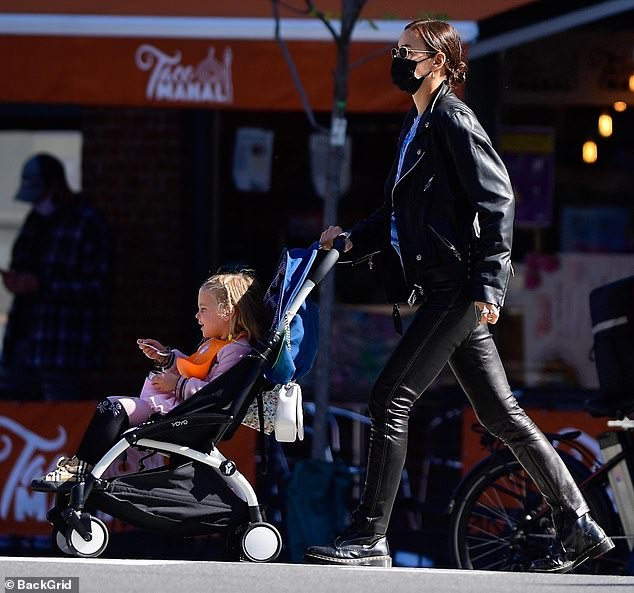 Strut: The former partner of Bradley Cooper took to the streets like a runway as she walked with their daughter 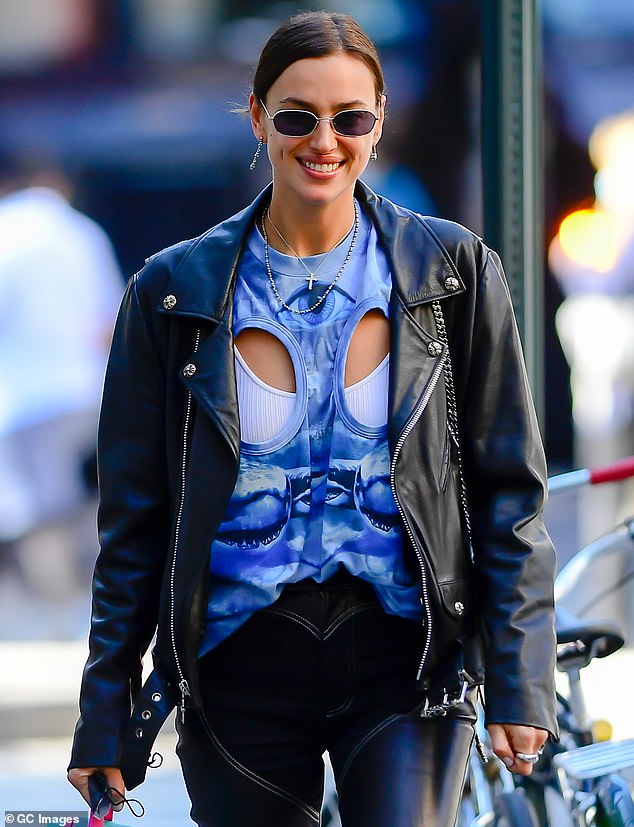 Cool mom: The lingerie model strolled around NYC in a pair of skin-tight leather pants and a matching oversized leather jacket with silver hardware 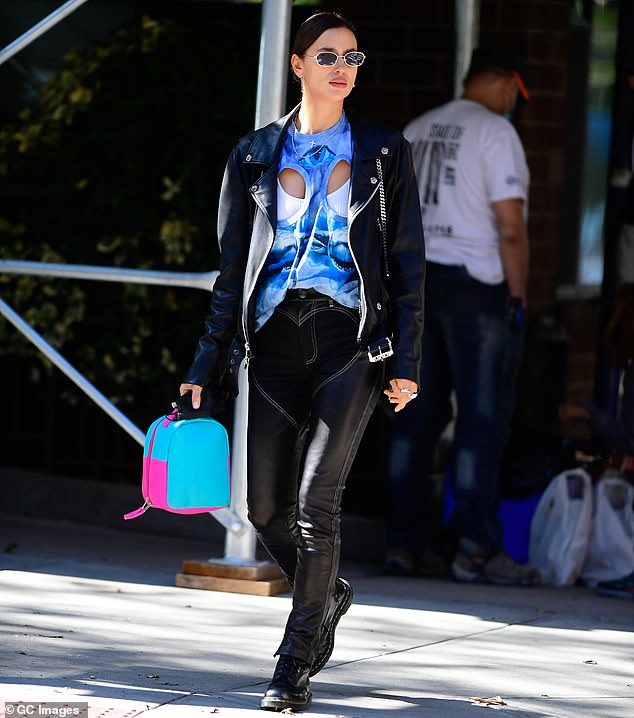 Chunky rings: The mother of one flashed a glimpse at some silver chunky rings as she crossed the street 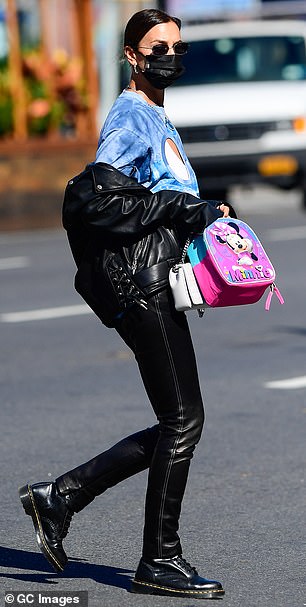 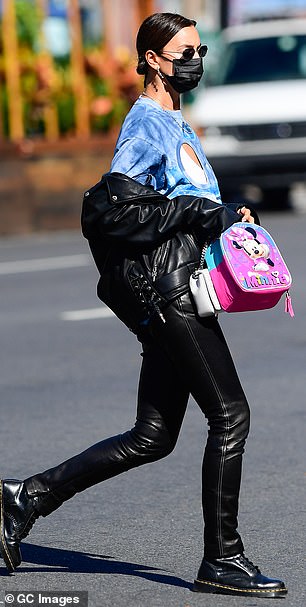 Double duty: Irina carried both her own purse and her daughter’s hot pink sack as she went to retrieve the toddler

Tailoring back the revealing look, Shayk threw on a white tank top underneath the shirt.

The in-demand model complemented the outfit with a pair of small framed purple glasses and matching silver jewelry.

Layering a cross necklace with another silver chain, Irina threw on a pair of mismatched silver drop earrings.

Irina completed the look with a pair of Doc Marten boots, that rounded out the effortlessly cool outfit. 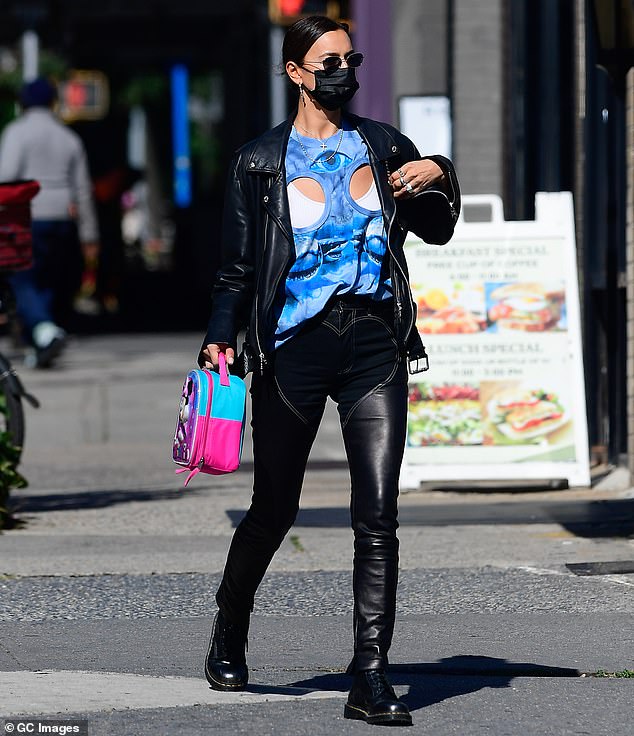 Layered: Tailoring back the revealing look, Shayk threw on a white tank top underneath the colorful blue shirt 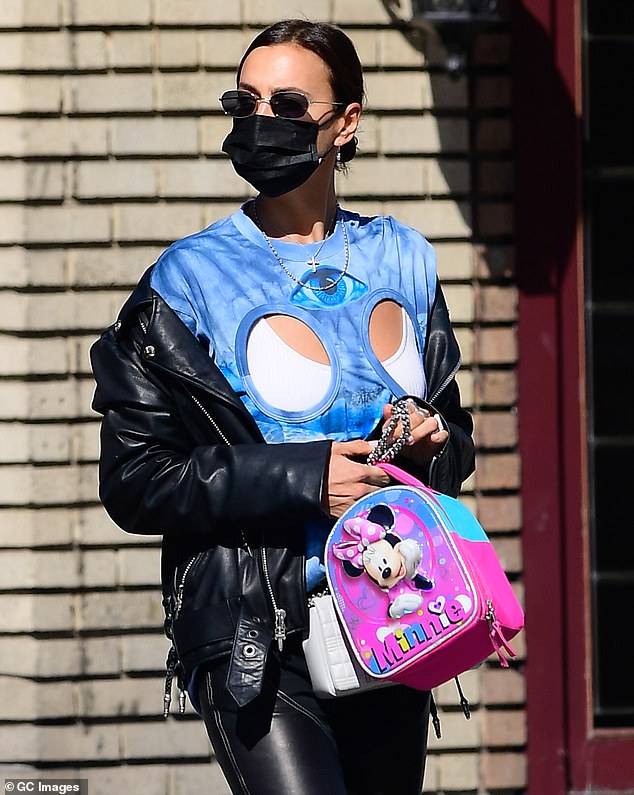 Doting mom: Irina carried around Lea’s Minnie Mouse sack as she picked her daughter up 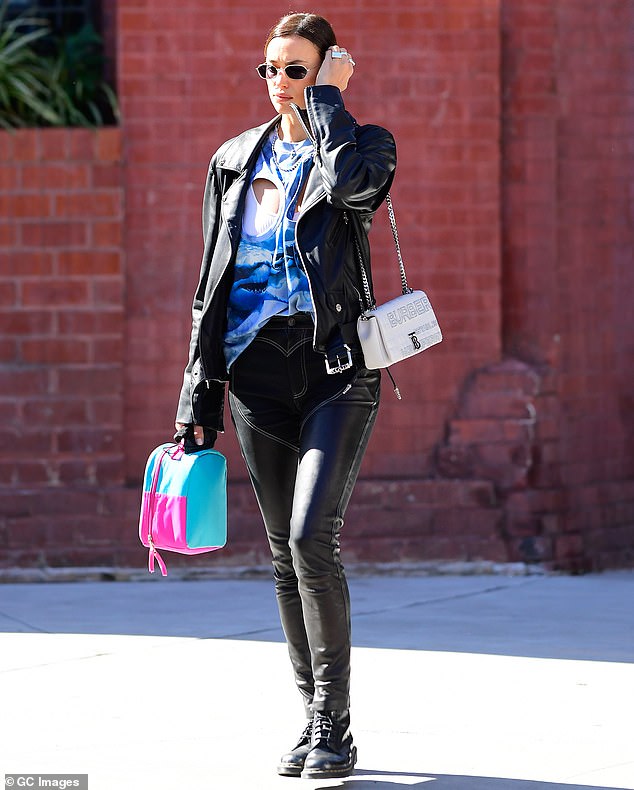 Burberry: The model juxtaposed the all black look with a white Burberry purse

She wore her hair back in a sleek low bun as she added a black face mask to match her ensemble.

Adding a pop of white to her look, Irina carried a white Burberry purse with a silver chain.

Every bit the doting mother, Irina carried Lea’s Minnie Mouse backpack as she picked her daughter up from school.

At one point she flashed a look at some chunky silver rings, as she tucked  her hair behind her ears.

Lea, who she shares with former partner of four years, Bradley Cooper, 45, looked to be in good spirits as her mother pushed her in her stroller.

Taking a cue from her mom’s Burberry accessory, Lea sported a pair of Burberry boots in the brand’s signature print.

She donned a fashionable look of her own, as she wore a baby pink outfit and a pair of cat-printed tights.

Having herself a little snack, Lea ate from her thermos, as she wore an orange bib to prevent spillage.

Since splitting from Cooper in June 2019, Irina and Bradley have been co-parenting expertly.

In recent months, Shayk has been linked to art dealer Vito Schnabel, 34, with her even entrusting him to drop Lea off at school from time to time. 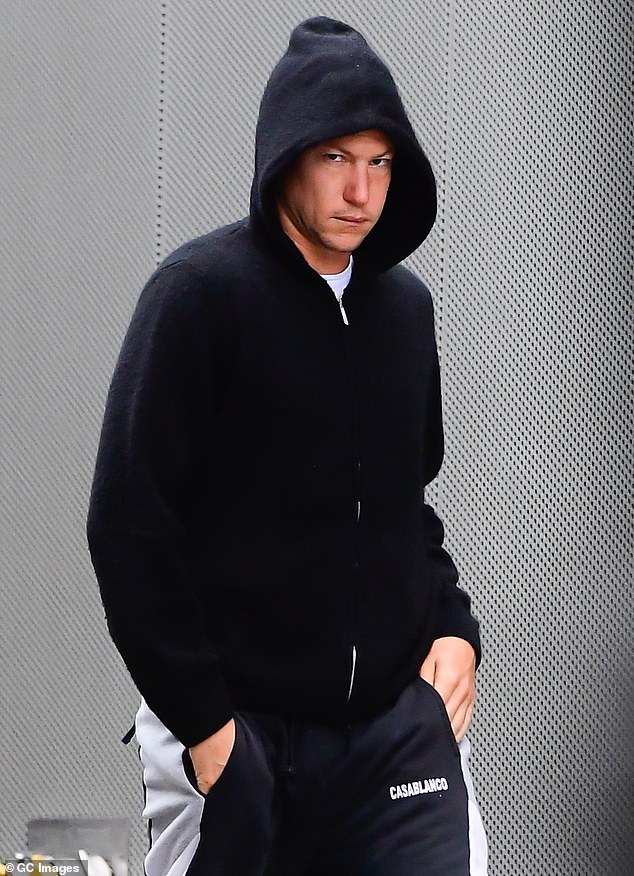 New man: Irina has been reportedly dating art dealer, Vito, who was formerly the ex of Heidi Klum; pictured in SoHo September 2020