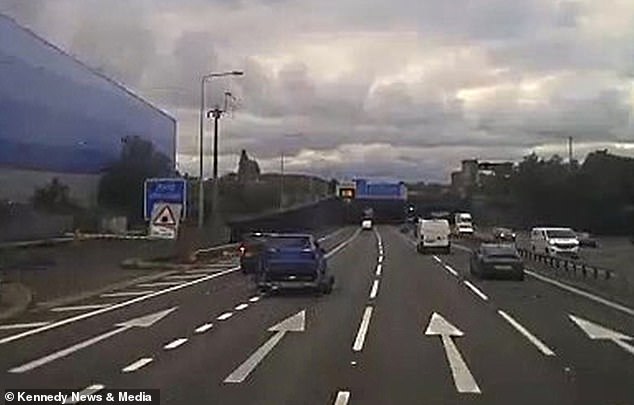 A runaway trailer carrying a smashed car broke free on a busy motorway before crashing into a tunnel.

Lorry driver Calvin Walker, 47,  was approaching the Holmesdale Tunnel, Hertfordshire, near Junction 25 of the M25, when he spotted the runaway trailer.

Footage captured on Mr Walker’s dashcam showed a Land Rover up ahead with its hazard lights on for no apparent reason.

But as Calvin, from Stowmarket, Suffolk, continued down the motorway it became clear a trailer carrying a blue Ford had become detached.

The runaway trailer veered across the carriageway and even overtook the Land Rover before eventually coming to an abrupt halt as it crashed into a wall at the opening of the tunnel.

In the clip, recorded on October 8, a blue Ford car on a trailer can be seen hurting down the inside lane, skidding along the concrete barrier.

The Land Rover up ahead, which had been towing the smashed car, has its hazard lights on but the driver can only helplessly watch as the trailer veers across the tarmac.

The trailer continues to gain momentum and even overtakes the Land Rover as it moves into the second lane of traffic.

The trailer eventually comes to an abrupt halt as it smashes into a wall at the opening of the tunnel, causing the 4×4 to brake suddenly.

The runaway trailer veered across the tarmac as it approached the Holmesdale Tunnel, Hertfordshire, near Junction 25 of the M25 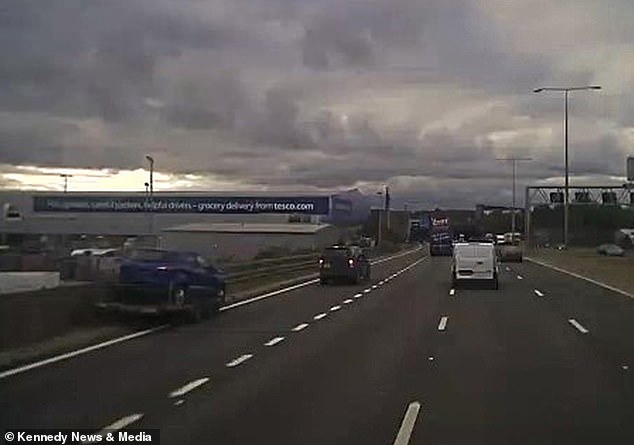 Speaking after the incident, Calvin said: ‘Once that trailer became detached it could have gone anywhere and hit anything. It was like a missile.

‘In 26 years of driving I’ve never seen anything like this before. It was very strange. I’ve seen a lot in my time, you never know what to expect any more.

‘You have to expect the unexpected. Fortunately I did which is why I held back and tried to slow traffic going past. I had no idea where that trailer was going to end up.

‘As I went past it had finally come to a stop, it had been moving for about half a mile probably. The driver of the car was still trying to get back in front of the trailer as I carried on. 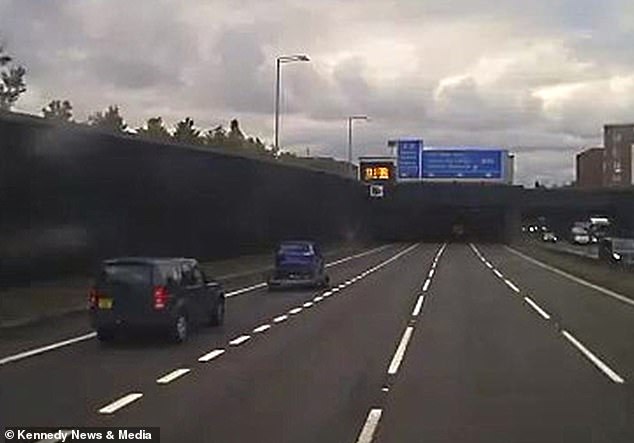 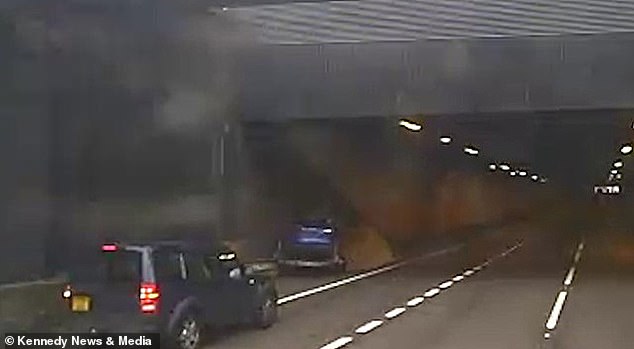 ‘The car on the back was already smashed up. It wasn’t going to be in much better shape after this crash. The tow bar had completely come off the Land Rover.

‘I don’t think they did a great job of protecting other motorists. If it had been me, I’d have let the trailer hit me up the backside to stop it.

‘Fortunately everything else is a bit quieter on the roads at the moment. If that had been a normal Thursday afternoon on the M25 this could have caused absolute carnage.’

Essex Police, who have jurisdiction over the Holmesdale Tunnel, have been approached for a comment.