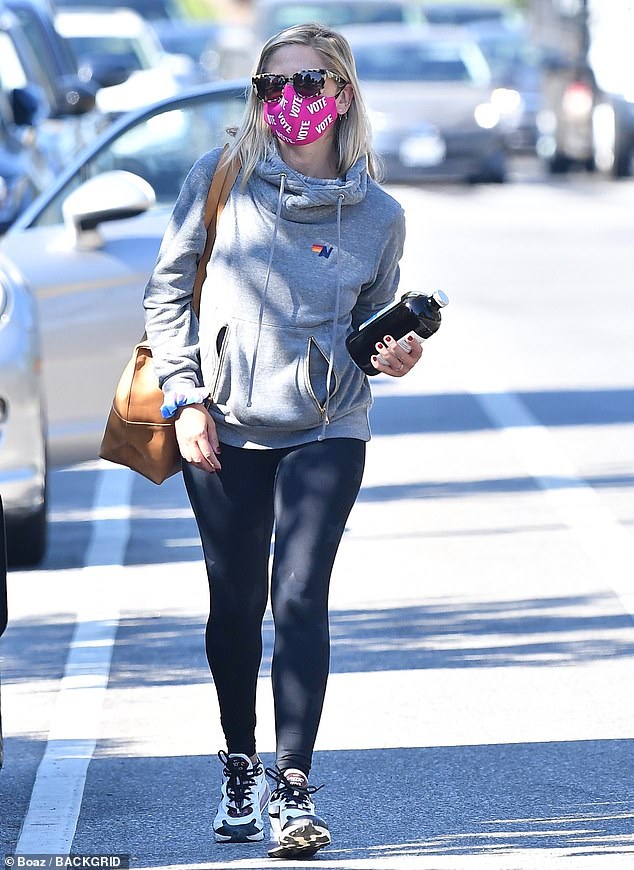 The Buffy The Vampire Slayer actress rocked a Christian Siriano VOTE mask while in the Brentwood neighborhood of Los Angeles.

The 43-year-old star was dressed in exercise gear as she held on to a bottle with a purse on her shoulder.

Workout mode: Sarah Michelle Gellar, 43, keeps it sporty in a pair of black workout leggings and a ‘vote’ face mask as she steps out for a workout in Brentwood.  The Buffy the Vampire star, played it safe, while promoting an important message

For her fitness outing, Sarah had on a pair of black spandex leggings adorned with black printed stars that added some flare.

She slipped on a comfortable grey hoodie that had zippered front pockets, as she walked to her class in the sweltering Los Angeles heat.

Gellar kept it comfortable in a pair of pastel colored Nikes as she prepared to get her body moving.

The star carried a bottled beverage in one hand, and threw a brown tote bag over her shoulder. 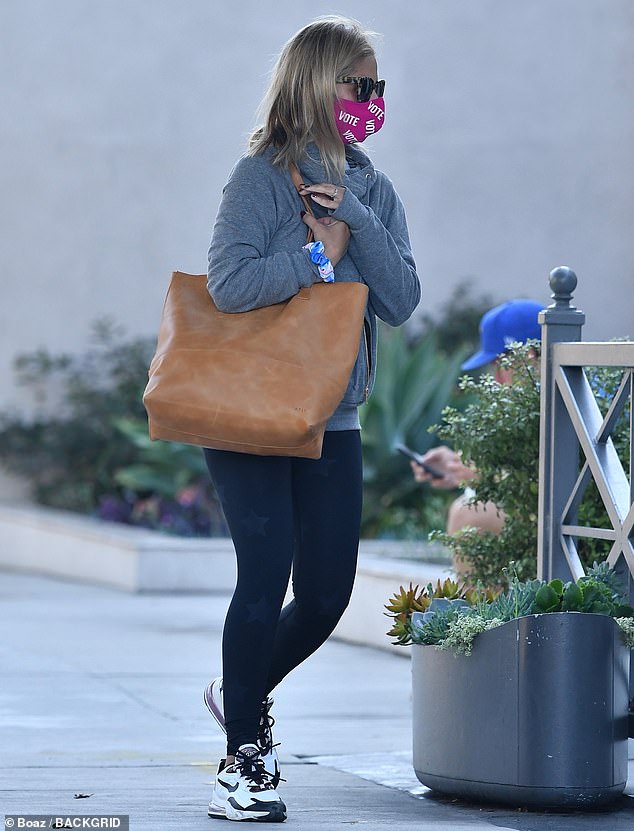 Vote: Gellar joins tons of celebrities who are urging the importance of voting just weeks from the November election

Keeping her blonde locks down, she came prepared as she fastened a blue tie-dye Scrunchie on her wrist.

Her hot pink vote mask made a statement, as she covered her eyes with a pair of tortoise shell glasses.

Continuing her day with more Siriano love, Gellar swapped her workout clothes and mask for a couture mini dress also made by Christian.

The actress playfully wrote, ‘trying to up my zoom game,’ as she posed in the black Christian Siriano dress for the Instagram snap. 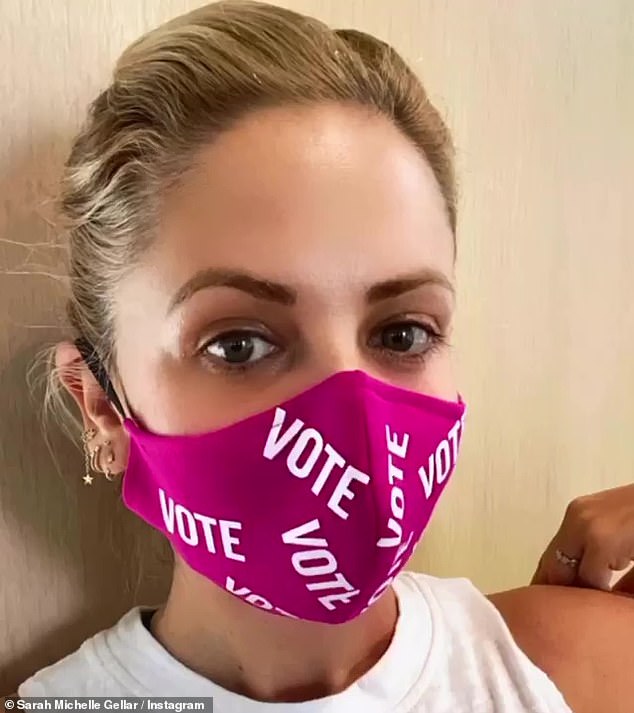 Masked and fabulous: The mask, made by designer Christian Siriano, seems to be Gellar’s go-to as she is spotted wearing it frequently 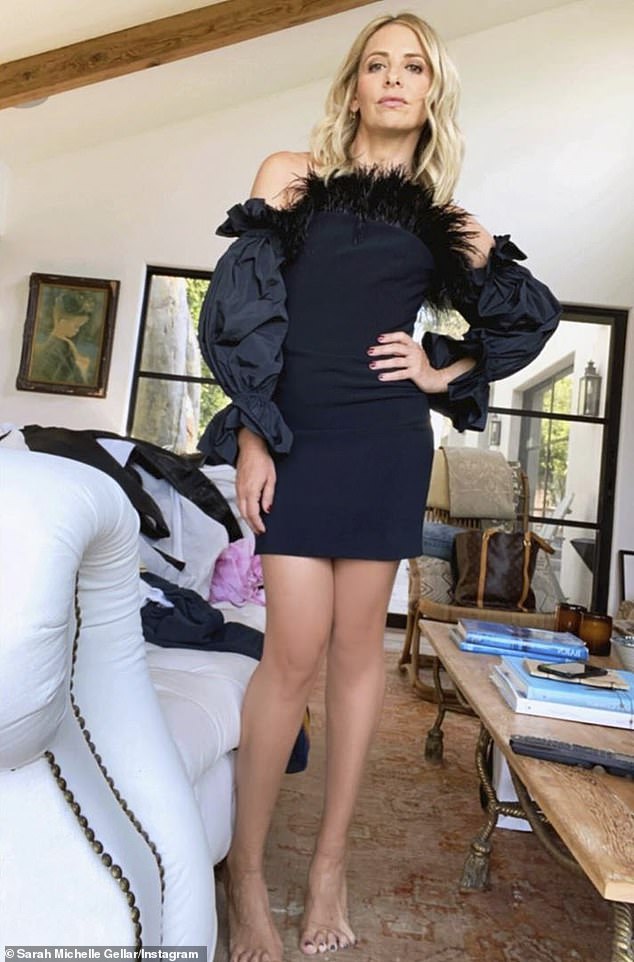 Serving looks: The Buffy the Vampire star elevated her ‘zoom game,’ as she posed in a black Christian Siriano couture look

Sarah was serving looks in the dress that had puffy sleeves and feather detailing, as she posed barefoot in her living room.

The veteran actress showed off her matching dark pedicure and manicure, and had her hair lightly curled.

The post was quick to garner a slew of comments from friends like Selma Blair, Rebecca Gayheart and Kristin Chenoweth, to name a few.

Recently, the mother of two shared with People that her kids Charlotte, 10, and Rocky, eight, had started to watch Buffy. 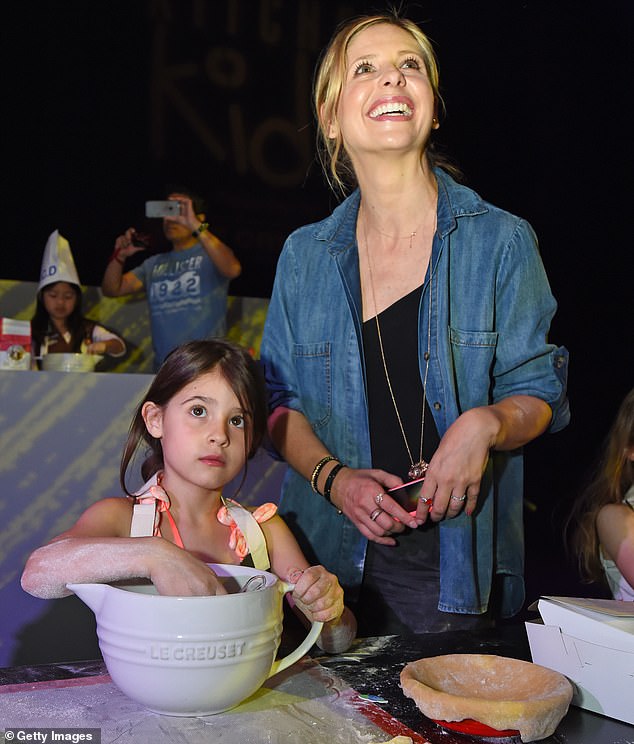 Cool mom: The 43-year-old actress revealed that after her kids started watching Buffy in quarantine, her son thinks she is ‘cool now’; pictured in 2015 with her daughter Charlotte

‘They asked during quarantine, we were trying to find shows to binge, and I was like OK I didn’t even know if they’d be into it, but they are like so into it,’ she said.

Gellar continued to say that although she does not remember certain things from filming while watching the show back, it has elevated her relationship with her children.

‘My son actually thinks that I’m cool now,’ she said.

Gellar shares her two children with her husband of 18 years, Freddie Prinze Jr.

The actors first met in 1997 while filming, I Know What You Did Last Summer, but did not start dating until 2000. 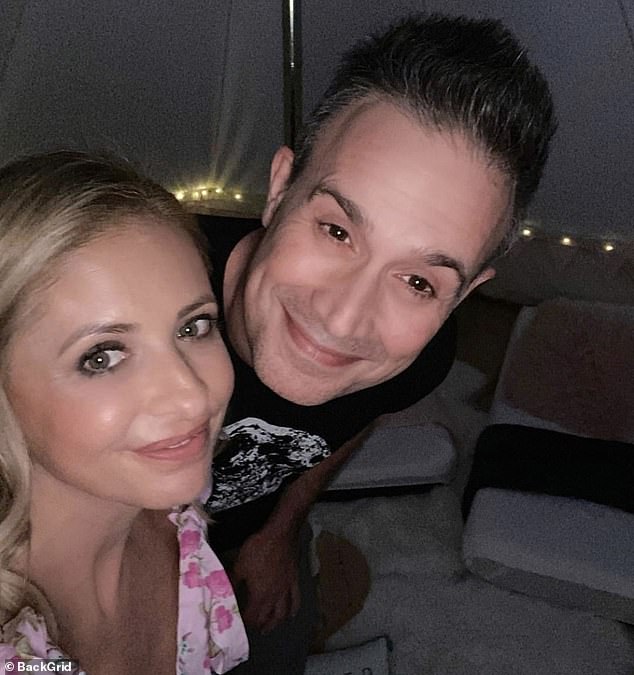 Going strong: Sarah and Freddie have been married for 18 years. The actors first met in 1997 during the filming of I Know What You Did Last Summer, but did not start dating until three years later