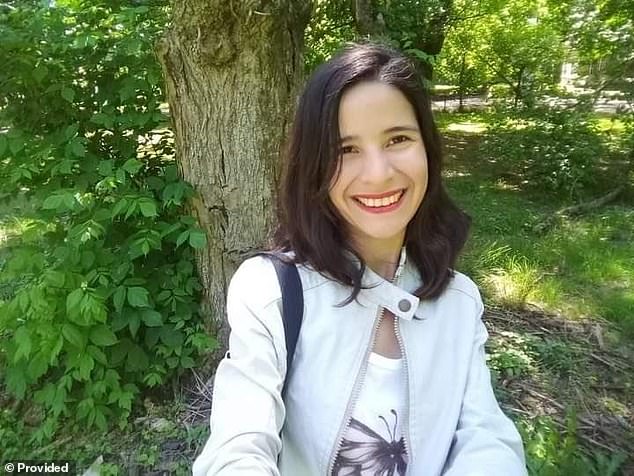 Shocking moment woman, 24, is dragged down Argentine street by muggers on a motorcycle before a man ran his car over her in an attempt to avoid mowing down the suspects

A chilling surveillance video captured the moment a woman was run over by a car while she was being dragged down a street by two armed muggers aboard a motorcycle in Argentina.

The near-fatal incident took place in the Buenos Aires city of Moreno on Tuesday morning when Brenda Gutiérrez stopped by her neighborhood bakery before attending a job interview.

A security camera video shows the moment the 24-year-old was standing outside the shop before two men drove up to the sidewalk and grabbed her cellphone and handbag.

Brenda Gutiérrez is recovering at a Buenos Aires, Argentina, hospital after she was run over by a car. The 24-year-old was mugged by two men aboard a motorcycle and she managed to hold on to her belongings as the motorist speed down a street. Gutiérrez fell off the bike and was nearly crushed by a car, suffering several fractures 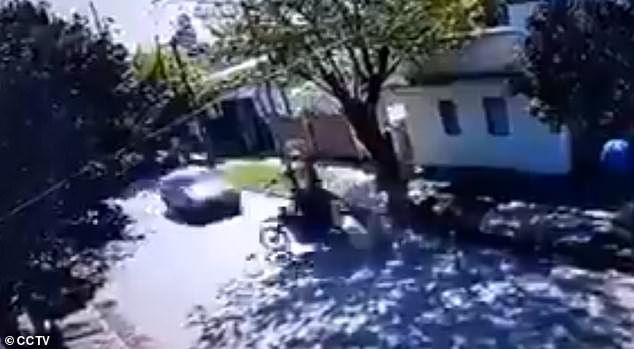 The wife of Tomás Villalba, the driver of the vehicle (pictured) that ran over Brenda Gutiérrez, said he was just trying to avoid a collision with the motorcycle. The suspects fired at his car after he crashed into a pole before fleeing

Additional surveillance footage shows the suspects driving on to the street and speeding away as Gutiérrez was being dragged while she held on to one of the assailants. Footage shows a car avoiding the motorcycle and running over her after she fell to the pavement.

The car was operated by Tomás Villalba, a 20-year-old employee of the bakery who happened to be driving by. A woman who identified herself as Luz, Villalba’s wife, told Argentine news station Telefé Noticias that her husband only was trying to maneuver around the motorbike before he hit Gutiérrez and crashed into a pole.

‘Brenda could not be seen because she was behind the motor. My husband wanted to avoid them. Instead of breaking, he accelerated, the car hit a pole,’ she said. ‘He gets down and yells when he sees Brenda lying down.’

The woman said Villalba ‘never wanted to drive over on Brenda, he never wanted this. What he wanted was to avoid them, for the muggers to go away and save Brenda, but he could not because when accelerating he hit a pole.’ 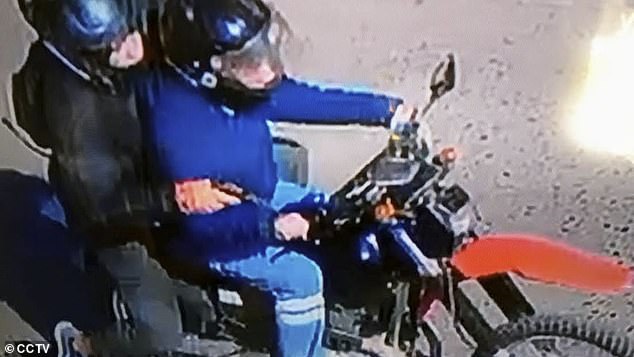 Pictured are the two suspects involved in the near-fatal mugging of Brenda Gutiérrez on Tuesday in the Buenos Aires town of Moreno. Both men remain at-large 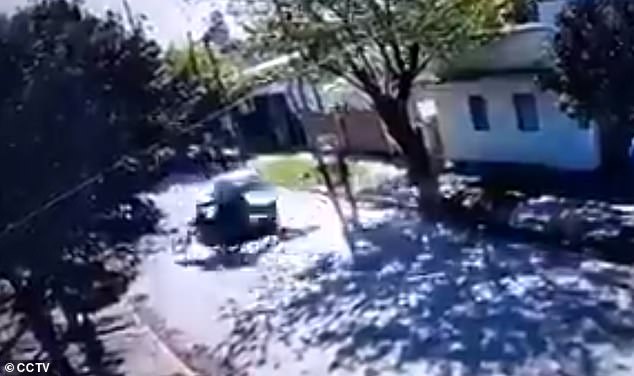 Surveillance camera captures the moment a motorist slammed into a motorcycle which dragged a mugging victim Tuesday in Buenos Aires, Argentina 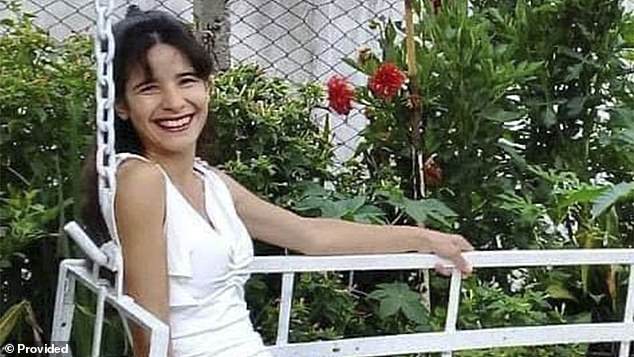 Brenda Gutiérrez suffered fractures to her arm, forehead and ribs. She was also diagnosed with  a contusion in the pelvis and internal bleeding,

Witnesses told authorities that the suspects fired several shots at Villalba’s vehicle before they fled.

It took an ambulance approximately 30 minutes to reach the accident site as Villalba, his wife and mother tended to Gutiérrez before paramedics rushed her to a hospital.

Gutiérrez suffered suffered fractures to her arm, forehead and ribs, and was also diagnosed with contusion in the pelvis and internal bleeding, and was listed in stable condition.

Rubén Gutiérrez said Villalba was not at fault for nearly crushing his daughter and thanked him for saving her life.

‘It was a miracle, the truth is that my daughter was born again today,’ he said.