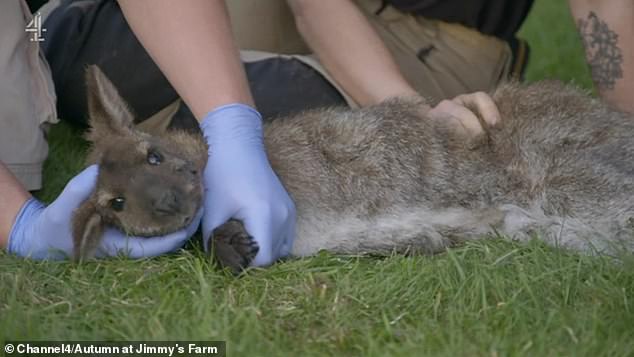 Autumn at Jimmy’s Farm viewers were left heartbroken when park keepers were faced with the difficult decision of putting Wendy the wallaby down after she developed a nasty abscess on her face.

In last night’s episode of the Channel 4 show, Tamzin – the wallaby’s primary carer – noticed that Wendy, who was normally the friendliest out of the bunch, wasn’t joining in with the others.

After closer inspection, Tamzin noticed the wallaby had a large abscess that had left a hole in her face – and after all medication failed, they were left with no choice but to put her down so that she was no longer in pain.

‘Loved watching this tonight- although cried like a baby at poor Wendy. Her keeper really cared,’ wrote one viewer, while a second penned: ‘So heartbreaking to watch.’ 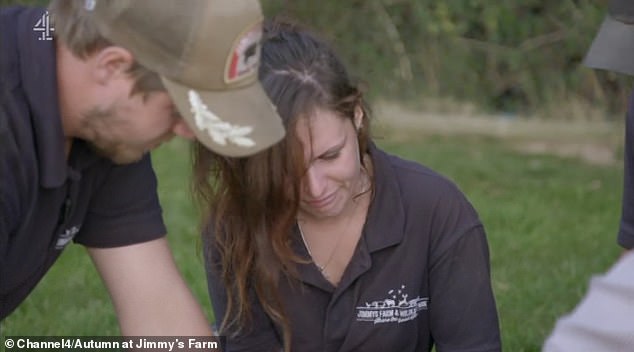 Taking to Twitter, one person penned: ‘Loved watching this tonight- although cried like a baby at poor Wendy. Her keeper really cared’ (pictured)

Tamzin told how she had a particularly close bond with Wendy – having looked after her every day since she arrived at the park.

During the episode, she was able to get close enough to examine her, but quickly discovered Wendy had a large abscess on her face.

‘Abscesses aren’t unusual in wallabys  – and this type, commonly known as ‘lumpy jaw’ – could’ve been caused by something relatively minor such as a cut in the mouth,’ explained Jimmy. ‘But if dirt or bacteria gets into the wound, this can then cause an infection.’

Wendy noted: ‘She’s been spending a lot of time in the emu house, which is genuinely where the goat food is kept, so she’s been nibbling on that because it’s a bit softer and the bits are a lot smaller as well.’ 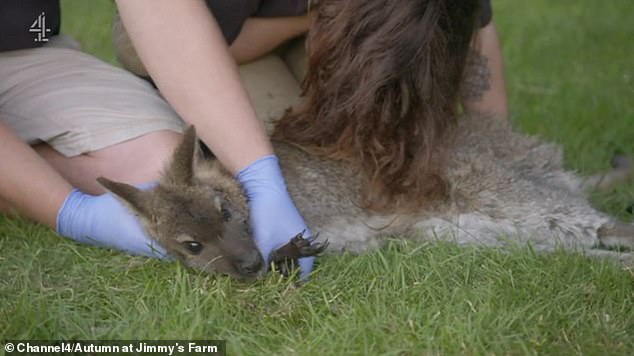 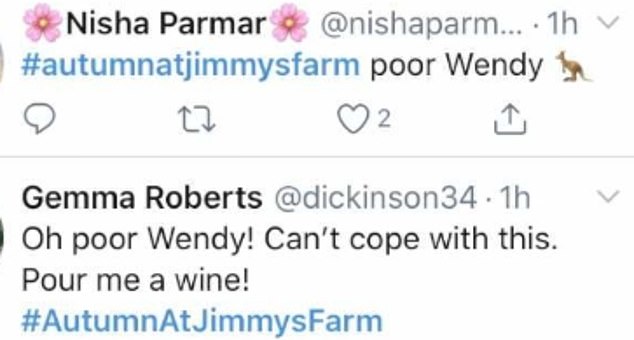 As the team analysed Wendy’s abscess, Jimmy explained: ‘It’s good to let the puss and infection out, but you don’t want a secondary infection. The other thing is hoping that there’s no infection in the bone.’

‘Abscesses can be very aggressive and at worst, fatal, so it’s imperative we act fast.’

The abscess was so large, that it left a hole in Wendy’s face. Having agreed a course of action with the vet, Stevie and Chis drained out the puss before cleaning the wound.

‘That’s the antibiotic injection  – that’s going to fight the infection,’ said the vet, as he worked quickly in a bid to save Wendy’s life. ‘But because it’s quite swollen and bruised and she will be in a bit of pain, we’re going to give her an animal form of Ibuprofen.’

However, as evening approached, the keepers noticed that after some initial signs of improvement, Wendy had taken a turn for the worst and was looking docile.

‘It does look likes its spreading,’ said Tamzin. ‘That hole just seems to be getting larger every time.’

The team called for vet Henry who explained: ‘I feel like the infection has very much taken hold, so I think we’re all of the mind that it’s time to call it.’

‘It’s always a hard one, but we’ve done the best we can for her. We’ve given her the medication – it’s never easy. This is Tamzin’s baby.’

And as the vet announced it was kinder to sedate Wendy, heartbroken viewers took to Twitter.

‘Oh poor Wendy! Can’t cope with this. Pour me a wine,’ commented one, while a second added: ‘Poor Wendy,’ followed by a crying face emoji.