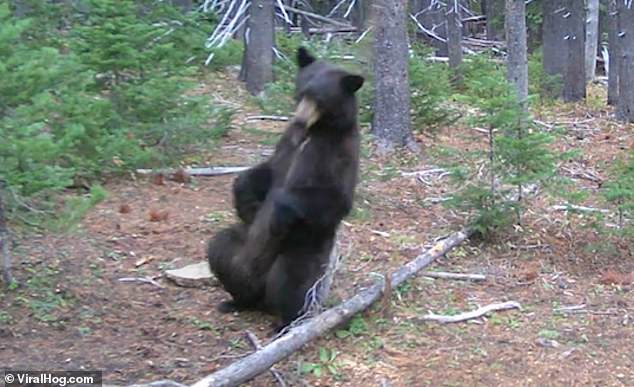 Bear necessities! ‘Dancing’ black bear bobs up and down as he finds the perfect tree for a back scratch

This is the moment a ‘dancing’ black bear scratches its back on a thin tree in Washington State.

The bear leans up against the slanted branch and moves its legs at a high speed to ‘scratch its back’.

In the footage captured on a game camera, the bear appears to be bouncing its knees and almost dancing.

When it is done, it drops down to all fours and walks away on October 6 shortly before 7.45am.

Black bears rub against trees not to scratch an itch, but to mark their scent, particularly during mating season, according to the North American Bear Center.

The bears will rub their shoulders, neck and crown against it but may also claw it, leaving usually superficial marks.

The bear leans up against a slanted branch in Washington State on October 6, shortly before 7.45am and bounces its knees to rub its scent on the branch

They may also bite it deeply enough that pieces of bark or wood are sometimes pulled out.

In August this year, a rare Kermode bear was spotted rubbing against a wooden power pole in Terrace, British Columbia, Canada.

Kermode bears are a sub-species of the American black bear with a rare gene, which only one in 10 possess, that turns their fur white or cream. For cubs to be born with it, both parents must have the gene. 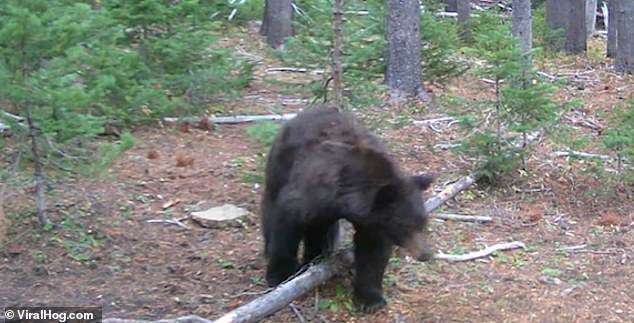 On the footage captured by a game camera, the bear can be seen getting down and walking away after it is done