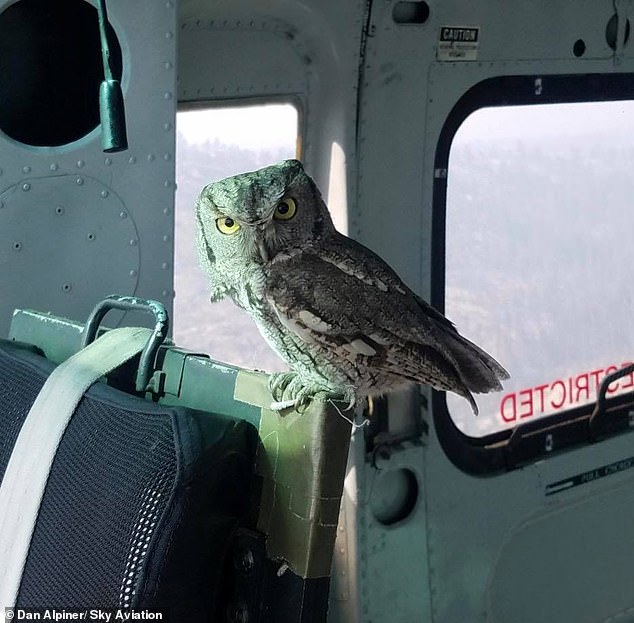 An owl caught a lift in a helicopter mid-flight to escape the Creek Fire in the Sierra National Forest, California.

The owl entered the aircraft at around 12.30pm on Sunday in Madera County.

The bird squeezed through a a small 16 inch by 16 inch window of the UH-1 Huey Helicopter piloted by Sky Aviation’s Dan Alpiner.

It sat with him for several water drops as its home burnt below, before flying away to safety after about ten minutes.

An owl caught a lift in a helicopter mid-flight to escape the Creek Fire in Madera County, California 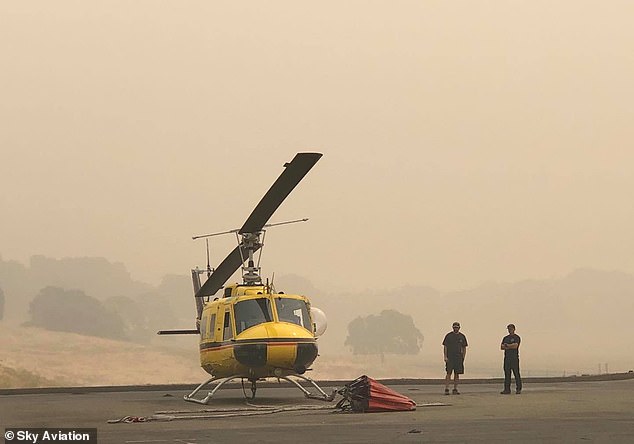 A photo shows the owl perched on a seat inside the helicopter, but Alpiner was only able to get one shot of the bird because ‘it’s not easy to fly a mission and be a photographer at the same time’.

He told KMPH: ‘It kind of spooked me for a second there and we kind of locked eyes and the thing looked around and was chill.

American Helicopter Flight instructor Matthew Dowdy said the the owl and the helicopter must have been traveling at the same speed for the bird to land safely in the aircraft.

The Creek Fire started on September 4 and has spread over more than 337,655 acres, making it the largest single wildfire in California’s recorded history

He said: ‘It would have to be perfect timing.

‘As far as the bird going in there, it seems crazy. I guess it is just a daring bird.’

The company said the wind created by the blade of the helicopter is enough to knock a grown man to the ground.

Sky Aviation said: ‘It’s odd to have an owl enter an aircraft. It’s unheard of to have it enter while the helo is in-flight.

‘It’s an unexplainable and magical miracle for it to stay with you for several water drops, then leave just as it arrived – safe and unannounced.’ 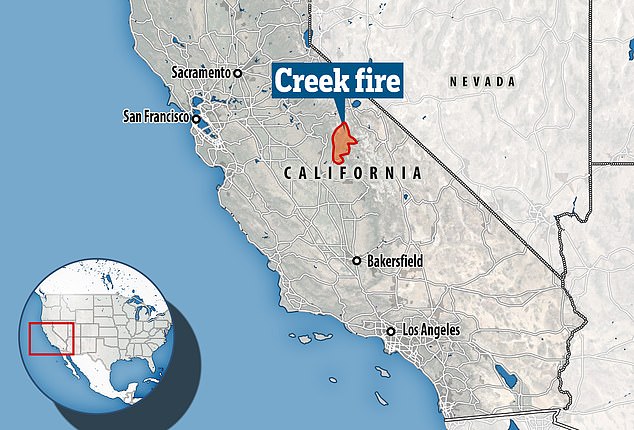 The Creek Fire started on September 4 and has spread over more than 337,655 acres, making it the largest single wildfire in California’s recorded history.

The fire has destroyed 856 structures and damaged 71 others. There are 964 personnel currently working on containing it.

While many scientists believe climate change is to blame for the fire, beetles have also been blamed for eating their way through millions of acres of trees across the western North America, creating heaps of dry timber just waiting to be ignited.

Climate change, according to experts, has sparked a five-year drought in the state, resulting in millions of trees stressed without water and vulnerable to these creatures.

Cal Fire Public Information Officer Daniel Berlant said: ‘So many of the trees have died creating significant fuel for the fire to burn.

‘Massive amounts of pine trees that have died off over the years due to drought and due to the bark beetle.’

The US Department of Agriculture has estimated more than 129 million trees have died since 2010 as a result of years of drought and bark beetle infestations.