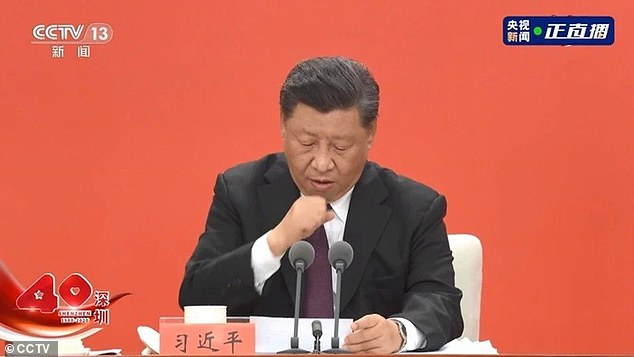 China’s President Xi violently coughs throughout speech, prompting speculation on his health, as state media cuts away each time he is forced to stop speaking

Chinese President Xi Jinping has been caught coughing his way through a speech to his cronies, sparking speculation about his health.

The Communist leader could be heard coughing repeatedly during the final ten minutes of a speech in Shenzhen, close to Hong Kong, on Wednesday.

State TV repeatedly cut away from Xi during the bouts of coughing, but caught the moment he lifted his hand to his mouth.

Audio also caught the President spluttering and sipping from a glass of water in order to clear his throat.

The footage was seized upon by Xi’s critics, particularly those in Hong Kong, who speculated about his health amid the coronavirus outbreak.

Apple TV also suggested that Xi subsequently cut his trip short and returned to Beijing, though MailOnline was unable to verify this.

Meanwhile the Epoch Times, which is linked to the heavily-persecuted Falun Gong religious group, openly questioned whether Xi has the virus.

His visit to Shenzen came amid a tour of southern China, where he has been pictured meeting crowds without a mask, though always from a distance.

China officially reports around a dozen cases of the virus per day, and while those numbers are subject to doubt, the country’s rebounding economy suggests the virus is far from rampant. 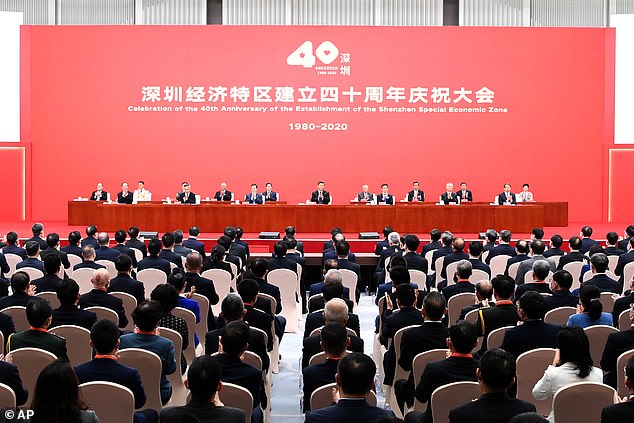 The episode, though brief, sparked speculation that Xi is unwell among his critics, and even suggestions that he could have coronavirus

That makes it extremely unlikely that Xi has contracted the virus, though China’s rush to censor his coughing shows how sensitive the issue is politically.

Beijing has been keen to show off its strength in responding to the disease, amid allegations that missteps and cover-ups early on allowed the disease to spread internationally, eventually reaching every country on earth.

An outbreak of just 13 cases in Qingdao at the weekend was enough to spark a mass testing response that saw everyone in the port city swabbed.

Officials claimed to have tested 10million people by Thursday without detecting any more cases of the virus – far beyond the testing capabilities of other countries.

Xi speech in Shenzhen marked the 40th anniversary of the former fishing village being declared the first place in China to allow free enterprise.

During his address, Xi promised to ease regulations to encourage new industries. 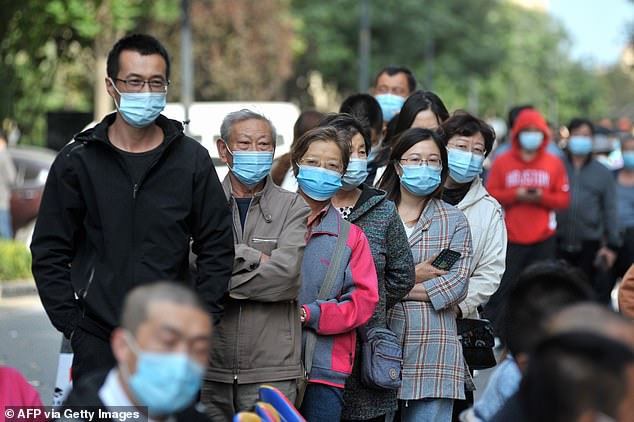 China is reporting around a dozen cases of the virus per day, meaning it is extremely unlikely that Xi has contracted it (file image)

He also called for ‘the great rejuvenation of the Chinese nation’ and ‘optimizing and upgrading production’.

China is attempting to capitalize on the global economic slowdown caused by the virus to increase its own global standing.

The country is expected to grow its economy this year, despite earlier lockdowns, while most other world economies are projected to shrink or stagnate.

Shenzhen has become a symbol of that growth, expanding from a village of 30,000 people in 1980 to about 13 million today.

Its economic output of 2.7 trillion yuan ($400 billion) last year was larger than that of South Africa, a country of 58 million people.