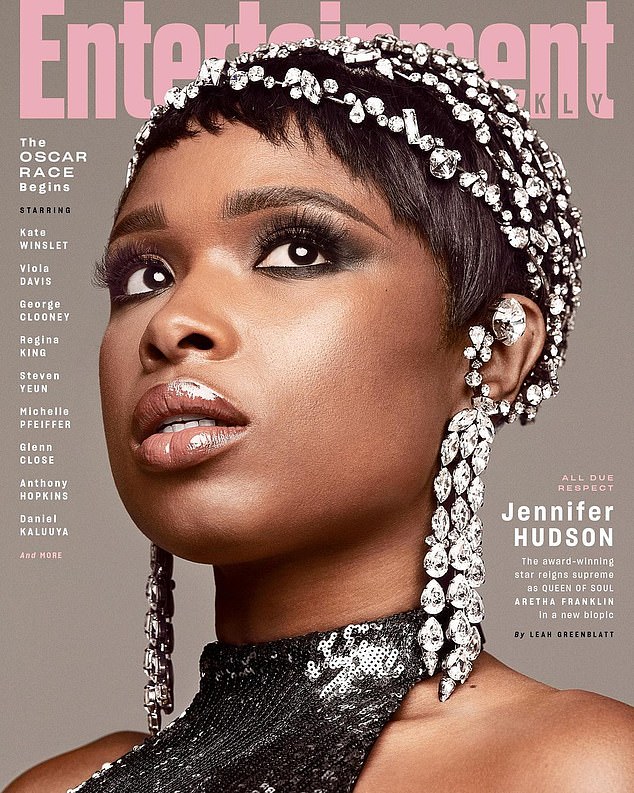 And on Thursday the singer was showing off one of her looks as the legend while on the cover of Entertainment Weekly.

The 39-year-old Dreamgirls actress, who was handpicked by the Queen of Soul herself to star in the movie, talks about the exciting project that has been a decade in the making.

Cover girl: Jennifer Hudson, 39, has landed on the cover of Entertainment Weekly in advance of her portrayal as Queen of Soul, Aretha Franklin, in the upcoming movie Respect which is slated for a January release

For the cover, Jennifer dazzles in a steel sequin halter dress and crystal chandelier earrings, oozing eminence in matching headpiece.

She continued, ‘Check out the November issue to hear me talk all about the Queen of Soul Aretha Franklin and @respectmovie! Can’t wait for you to see it!’

The post was quick to garner comments from her 3M social media fans, most notably from a modern day icon herself, Mariah Carey. 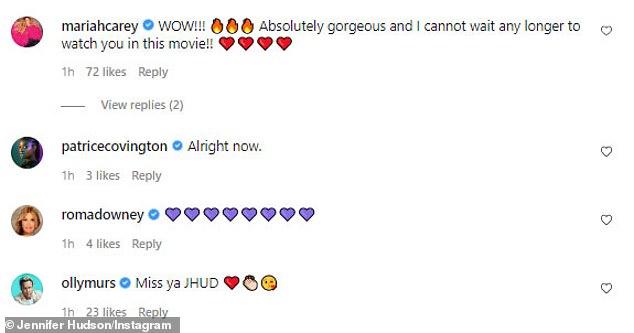 Fan love: Mariah was quick to comment on  Hudson’s cover news, as she showed love for her friend and shared her excitement for the film

‘WOW!!! Absolutely gorgeous and I cannot wait any longer to watch you in this movie!!,’ she commented with red hearts and fire emojis.

In the article, Hudson shares details of her meeting with Aretha and the subsequent summoning she received from Franklin to play the role.

‘We met in New York, and one of the first things she said to me was ‘You’re gonna win another Oscar for playing me, right?,’ Hudson shared.

She continued, ‘Imagine Aretha Franklin looking you in the face and saying that,’ with Hudson sharing that she replied, ‘I can try.’

Respect: Hudson shared that after a meeting with Aretha in New York, the iconic singer lovingly nudged, ‘You’re gonna win another Oscar for playing me, right?’

Though receiving Aretha’s blessing, the iconic singer died before the film was officially greenlit, after losing her battle with pancreatic neuroendocrine cancer in 2018 at the age of 76.

Taking her legacy onto the big screen was an emotional feat for Hudson, as she said:

‘I had to go into such a deep place to be able to do it at times, and it helped me to be able to pull from my life and it made me understand that much more why she chose me.’

Speaking to Aretha’s character, Jennifer shared, ‘Aretha was a very subtle person. It wasn’t a lot of big gestures, whereas I’m far more expressive…. She had this presence but also this stillness about her, so I would tell everybody on set, ‘If you don’t feel uncomfortable when I’m around, then I’m not giving you Aretha at all.’ 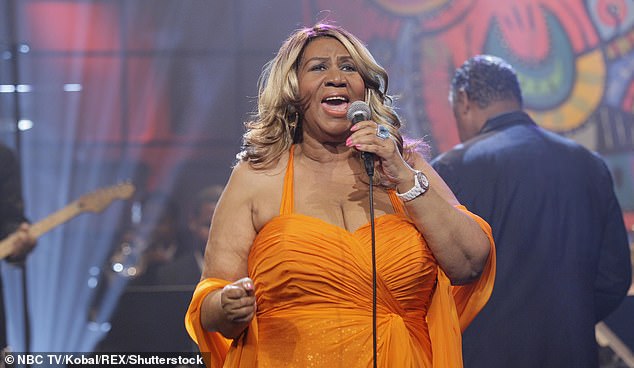 Aretha’s blessing: Though Franklin was not alive when the biopic was greenlit for production, she hand-picked Hudson to play her successor on the big screen years ago; pictured on The Tonight Show

Expressive: Hudson shared that she had to hone in her ‘expressive’ nature to play Aretha who is far more subtle on the stage; still from Respect

The film was shot in 53 days in both Atlanta and New York and features a star-studded cast of Mary J. Blige, Forest Whitaker and Marlon Wayans, to name a few.

Speaking about her close friendship with Aretha, Hudson shared, ‘I miss hearing from her, because I feel like in teaching me about her life she taught me about life.’

She continued, ‘I still have the text chains, so every now and then I look back at them. The last time I spoke to her was Aug. 8, [2018], and I can honestly say she sang until her last breath.’

The movie will have a limited release in December, with a wide release in 2021. 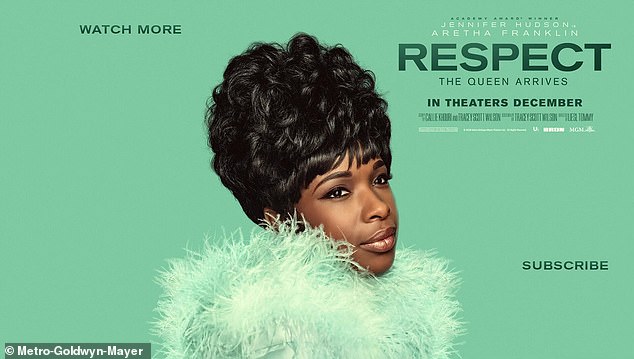 Big screen: Hudson’s screen debut as Aretha hits theatres in December. The film was originally slated for an October release but it was delayed due to the Coronavirus pandemic