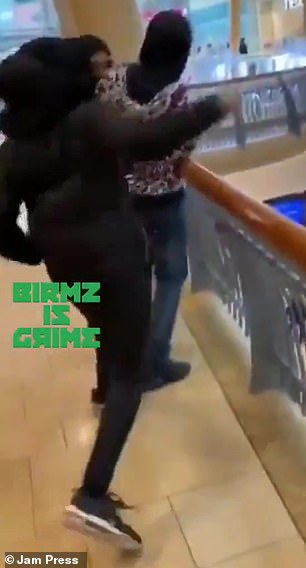 This is the shocking moment a masked thug punches a man in the back of the head before he is rammed into a store window in an unprovoked attack.

Footage filmed by one of the group members on Saturday shows two people approaching a teenager standing by a clothes shop inside Birmingham’s Bullring Shopping Centre.

The pair of hooded yobs throw a punch at him from behind as he stands next to a girl and continue to repeatedly batter him, while shouting ‘f***ing p***y as the victim tries to stand his ground and fend off the blows.

A 17-year-old victim was taken to hospital ‘as a precaution’ after suffering a cut to his face and has since been discharged, according to police. 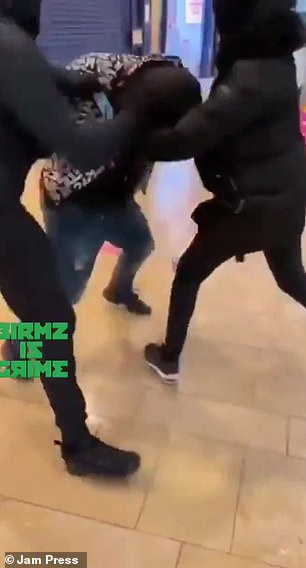 The man, who had his back turned away (left), didn’t appear to notice he was about to be attacked. One person threw a punch before his friend (right) joined in the assault

At one point in the clip, what is believed to be a knife spills out from one of their pockets onto the floor of the busy shopping centre in front of shocked onlookers.

The victim is then thrown into railings set up for social distancing shoppers and against the window of a store.

A masked woman, who was with the victim at the time, appears to try to calm the attackers down and stop the fight but to no avail.

Some of the victim’s belongings also fell to the ground during the attack including a disposable mask and a bank card.

Police said weapons were seen during the fight and a knife was recovered from the scene.

The footage, which was obtained by website Birmz Is Grime, has been viewed and shared thousands of times since it was uploaded to social media.

Social media users criticised the attack and praised the victim for standing his ground while others mocked the punches thrown by the attackers. 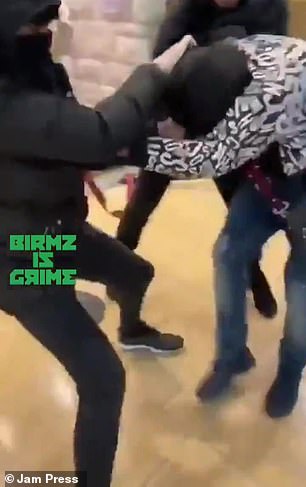 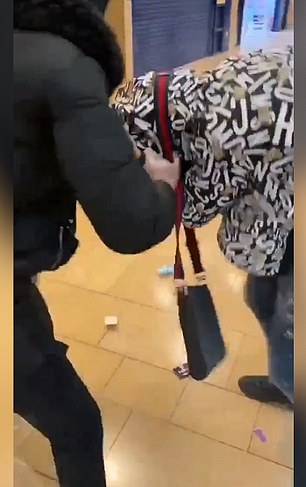 Some of the victim’s belongings fell to the ground during the attack, pictured, including a bank card and disposable mask. It is not known whether any arrests were made 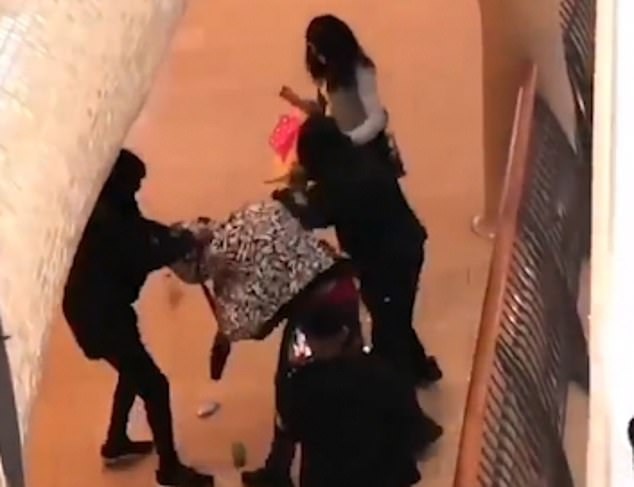 The unprovoked attack at Birmingham’s Bullring shopping centre captured from another angle, in a separate video. The extent of the victim’s injuries is not known

One wrote: ‘Brave of the two of them to sneak up and start punching a lad from behind. Real big men.’

Another added: ‘Two of them and still punched him from behind.’

A third said: ‘Wow imagine jumping someone 2v1 and not even knocking him to the ground.’

A spokesperson for West Midlands Police told MailOnline: ‘We are investigating reports of an assault at the Bullring Shopping Centre at 5.30pm on Saturday 10 October.

‘We understand there was a fight between a group of teenagers and weapons were seen. A 17-year-old boy was found nearby with cuts to his face. He was taken to hospital as a precaution and has since been discharged.

‘A knife was recovered from the scene for forensic examination and CCTV is being reviewed.

‘Anyone with information can contact us via live chat on our website or by calling 101. Please quote crime reference number 20BW/246641V/20.’