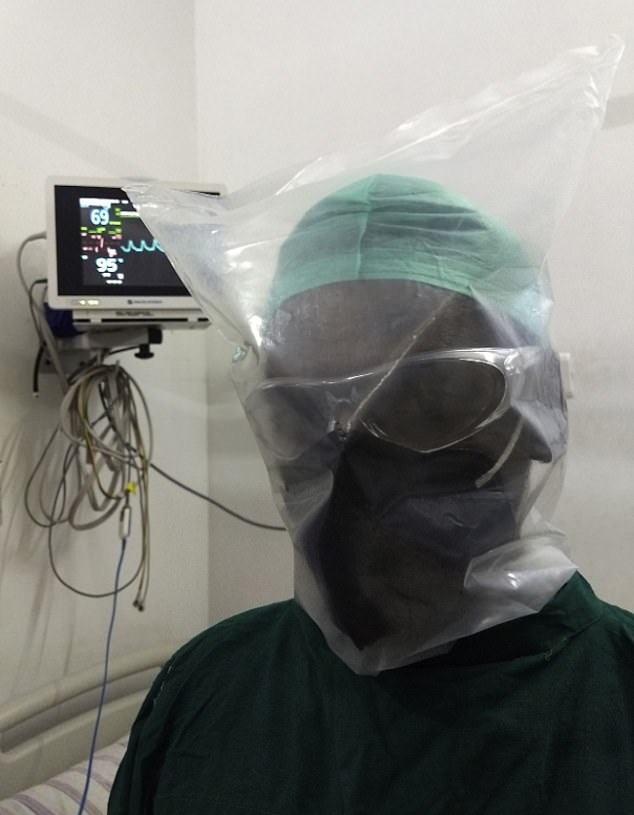 Plastic bags with holes cut out work as PPE and could be an alternative to shields, doctors on the Covid-19 frontline have claimed.

Medics in India who trialled the DIY face coverings revealed they could still breathe while carrying out procedures. And they reported that their spectacles didn’t fog up — a problem suffered by many when they wear a mask.

Although the suggestion seems comical, they stressed that the difficulties faced by global PPE shortages mean new solutions are needed.

Healthcare workers rely on PPE, including masks and gloves, to protect themselves and their patients from infections.

But PPE is in short supply across the world, with low-income countries struggling to source enough protective equipment –

Doctors in India have resorted to using raincoats and motorbike helmets as substitutes.

Even in Britain, NHS medics have claimed they have had to use bin bags and cooking aprons as a last resort.

MPs were told this week the care homes are still struggling to source PPE as Britain goes into the ‘second wave’ this winter.

Plastic bags with holes cut in work as PPE and may be an alternative to shields, Indian doctors on the Covid-19 frontline claim. Their makeshift covering is pictured 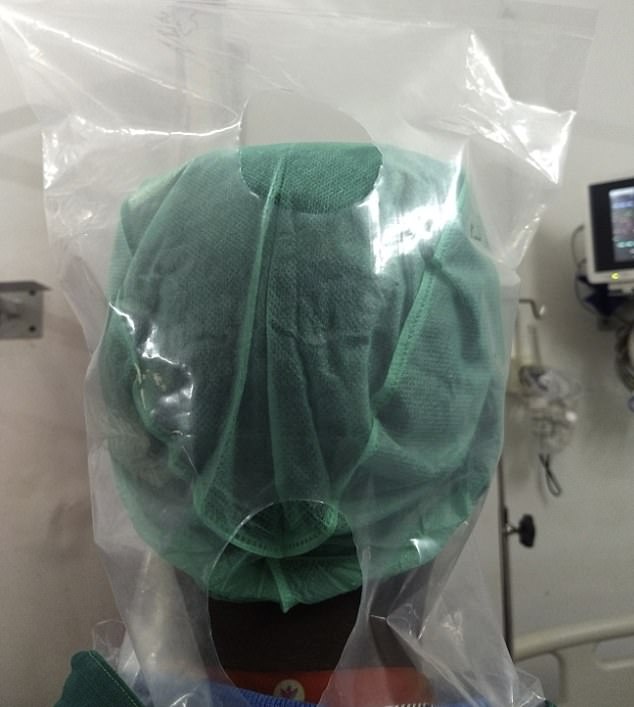 Doctors at Manian Medical Centre, in Tamil Nadu, offered the bizarre suggestion to try to solve some of the gaps in PPE resources.

Dr Subramanian Senthilkumaran, in the hospital’s emergency department, published the results of a study of their makeshift coverings.

An over-sized rectangular, clear transparent plastic bag was put over their heads and tucked into the top of their scrubs so that it would not slip out of place.

They were wearing a respirator N95 mask —  the most robust kind, to try and offer them another level of protection from infectious diseases.

Medics in the NHS are advised to wear a N95 mask as well as eye protection, such as goggles or a face shield, when working in close proximity to a Covid-19 patient.

Two holes, each of 3cm in diameter, were cut into the the back of the bags to allow the medics to breathe.

Shortages of PPE in both the NHS and social cares sector led to widespread complaints that staff were working in unsafe conditions during the first wave of the pandemic. Some grieving family members even blamed the lack of PPE for the deaths of their loved ones who may have caught the coronavirus at work.

PPE shortages could once again wreak havoc across the NHS, SAGE warned in its 47th meeting on July 16.

Minutes said with high certainty ‘there will be co-infection with influenza over the winter’, confirming fears of a ‘double whammy’.

And with both illnesses rife in the community, this could cause ‘logistical challenges around PPE usage’.

PPE, which includes face masks, goggles and gloves, are vital for protecting hospital staff and patients from outbreaks.

The disposable, one-use items are thrown away between patients to avoid viruses spreading from one patient to another.

But shortages crippled the NHS during the height of the pandemic due to a sheer lack of preparedness to stock up by the Government.

A repeat of the chaos could be even more dangerous this winter with two viruses —both of which can be fatal — in hospitals.

Workers in the care sector have already warned of a lack of access to PPE.

Jane Townson, chief executive, UK Homecare Association, said: ‘Providers are unable to access the quantities [of PPE] that we are told they should be able to order through the portal, because there just aren’t enough supplies behind the scenes.

‘So that really needs to be addressed, because the PPE is, at the moment, the major additional cost apart from staffing.’

Each participant was asked to do endotracheal intubation twice on a mannequin, to test whether or not it could work.

The medical procedure — often given to seriously ill Covid-19 patients who are struggling to breathe —sees a tube placed into a patient’s windpipe through the mouth or nose.

It would be considered high risk because it involves the medics being so close to the patient and coming into contact with their respiratory tract.

During the procedure, doctors measured the medics’ blood pressure and oxygen levels in their blood to make sure they were not suffering side effects from a lack of oxygen.

No abnormalities were found during the procedure, which should take less than a minute, suggesting the plastic bags allowed for safe and normal breathing.

The paper, published in The Journal of Emergency Medicine, said: ‘Participants did not complain of suffocation, fogging, or sweating.

‘They did not experience any difficulties during the procedure.

‘Two of them wearing spectacles regularly stated they did not experience any vision problem while using the plastic bag as a face shield.’

Based on the findings, Dr Senthilkumaran and colleagues proposed a plastic bag can be safely used as PPE.

It may be useful for aerosol generating procedures, such as endotracheal intubation or swabbing people’s nose and throat to test for Covid-19.

It’s not the first time medics have encouraged plastic bags as a form of PPE, the medics said, but the idea needed improvement.

The paper said: ‘In the midst of the coronavirus disease (Covid)-19 pandemic, face shields have become an essential component of personal protective equipment (PPE).

‘Yet there is a global shortage of PPE that is affecting the care of patients and the safety of health care workers (HCWs), which is forcing the latter to be innovative and identify new sources of PPE across the globe.’

Healthcare workers at a major coronavirus treatment facility in Kolkata – the Beleghata Infectious Disease Hospital – were given plastic raincoats as PPE in March, Reuters reported.

And a doctor in Haryana, Dr Sandeep Garg of ESI Hospital, had said that he had been using a motorbike helmet as protective gear due to shortages.

But cases in India have risen substantially since March. The country has now recorded at least 7.3million cases and 111,300 deaths.

A more recent survey of almost 400 medics in India, in May, found a third of respondents reused their PPE, sometimes disinfecting their face masks.

Only four of the eight respondents working in ICUs had regular and adequate access to N95 masks, goggles and face shields.

The World Health Organization warned in the very early days of the pandemic there would be severe disruption to PPE supplies, and that it would put lives at risk.

Its study estimated 89million medical masks would be required for the Covid-19 response each month. It did not say how it worked this out, or if it meant for the whole planet.

The pandemic has now rattled on for ten months, killing at least 1.09million people across the world and infecting tens of millions.

Due to shortages, governments around the world are bargaining for their share in a strangled global supply chain.

And experts say hospitals in low-income countries may already be at a disadvantage, with under-funded health systems often lacking in necessary equipment.

An international team of doctors wrote in the British Medical Journal in July: ‘Demand is soaring, prices are rising, and an international bidding war has ensued, with many low and middle income countries being outbid and priced out.

‘Shortages of PPE are nothing new for many low and middle income countries; systemic inequities in the supply chain were compromising healthcare delivery and health worker safety long before Covid-19 appeared.’

‘In recent months, high income countries have been scrambling not only to secure PPE shipments but also to deploy technologies to reuse and decontaminate PPE.

‘But what are the options for low and middle income countries? Many PPE decontamination technologies are resource intensive and costly.’

India said in March it would need at least 38million masks and 6.2million pieces of personal protective equipment, according to a report by the country’s investment agency seen by Reuters.

It did not give a time frame for how long that would last.