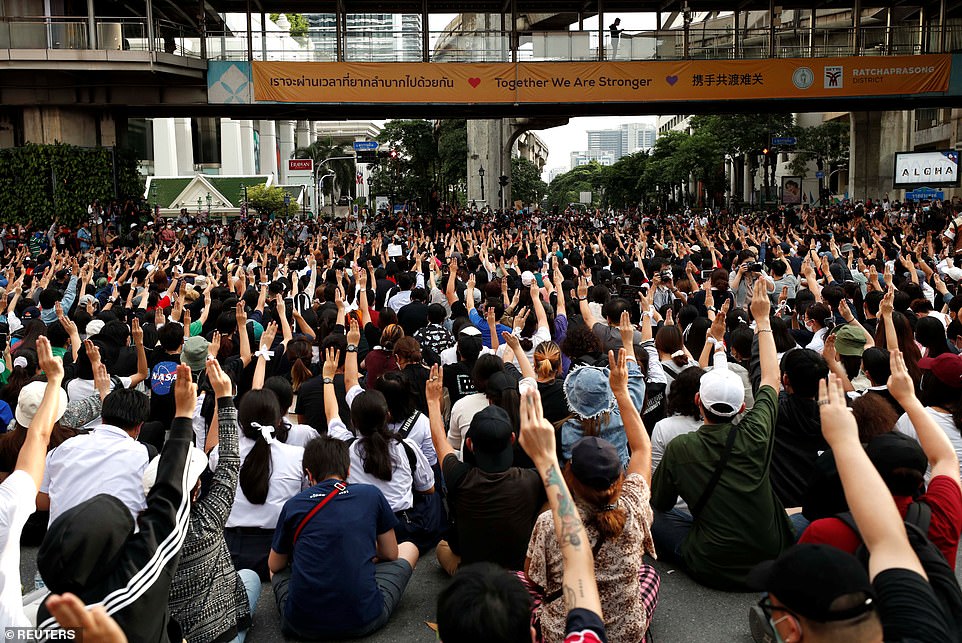 Thailand has entered ‘dangerous territory’ and is facing a ‘full-blown crisis’, an expert has warned, after anti-monarchist protesters openly defied the king with three-fingered salutes.

Marchers returned to the streets of Bangkok on Thursday despite a state of emergency being declared overnight, a day after confronting King Vajiralongkorn and Queen Suditha as they passed through the capital in a motorcade.

Protesters want the prime minister – a holdover from the military junta – to resign and a new constitution put in place, but it is their defiance of the country’s usually-revered monarch that has caught international attention.

Images of protesters standing alongside the royal limousine and raising Hunger Games-inspired salutes – a symbol of defiance to an authoritarian regime – are highly provocative in a country where people typically sit or lay down in the presence of the king.

‘What seemed to be a low-boil stalemate that the Prayuth government was managing with reasonable success has now… become a full-blown crisis,’ said Michael Montesano, of the ISEAS-Yusof Isak Institute in Singapore.

‘Unlike even 48 hours ago, the country is in dangerous territory now.’

Thais have taken to the street of Bangkok for a second consecutive day of protests demanding reform of the country’s government and monarchy, in defiance of police orders 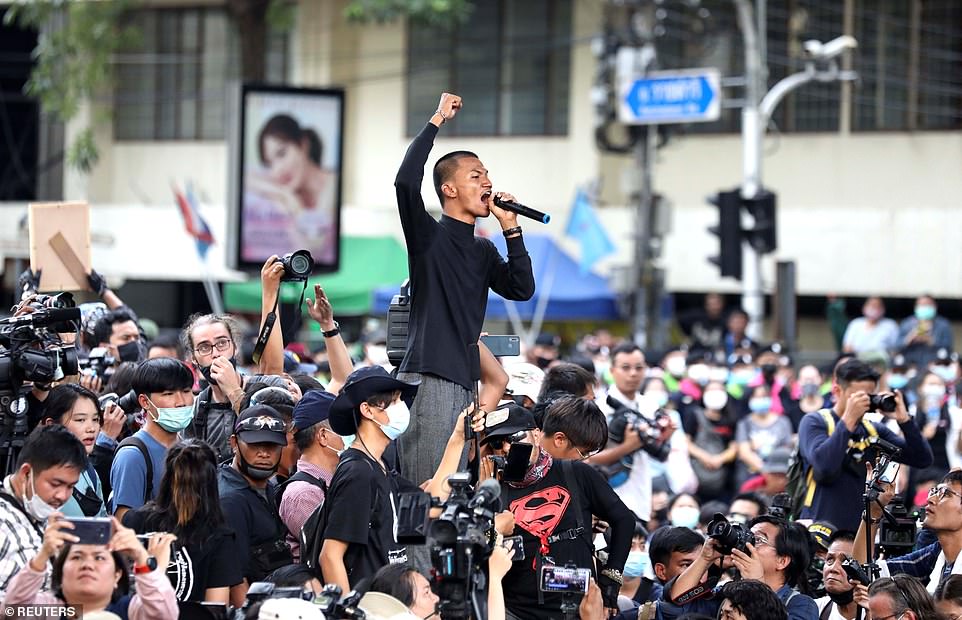 A man raises his fist in the air as he speaks during a protests in downtown Bangkok on Thursday, just hours after riot police cleared demonstrators off the streets 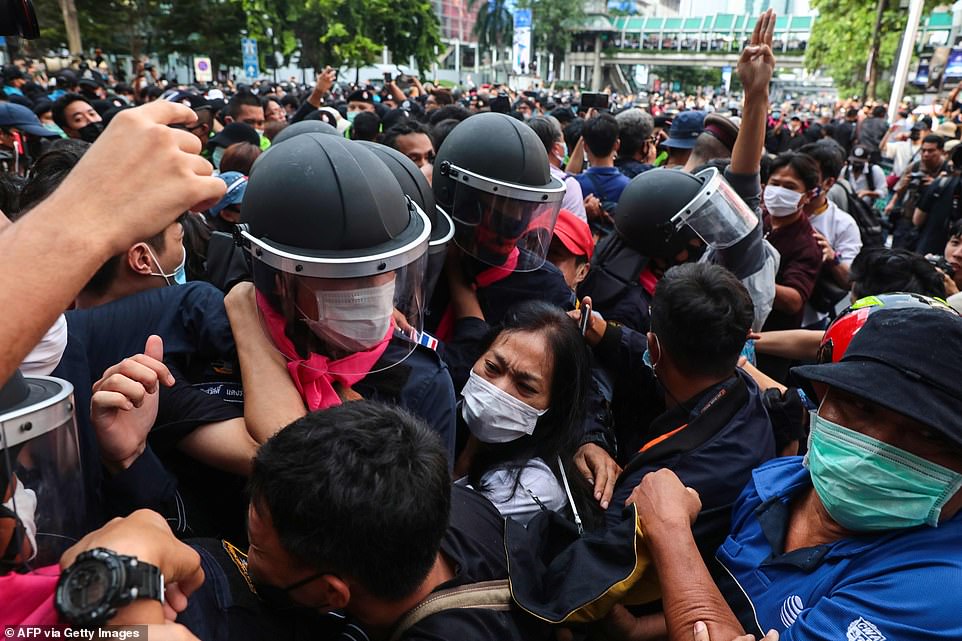 Scuffles broke out between police and activists as some were arrested, a day after an emergency decree was put in place banning gatherings of more than five people 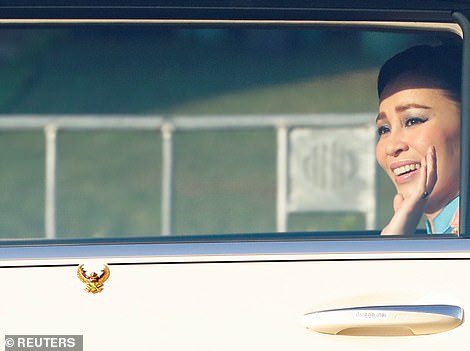 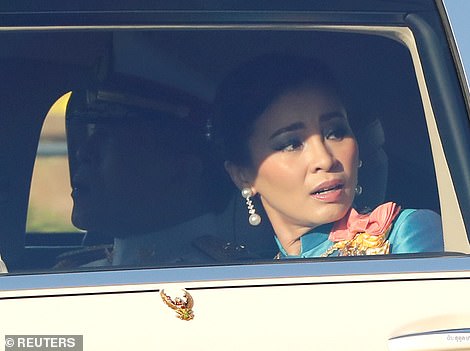 Queen Suditha looked distinctly nervous (left and right) as she waved to the crowds from the royal limousine, while riding alongside husband King Vajiralongkorn 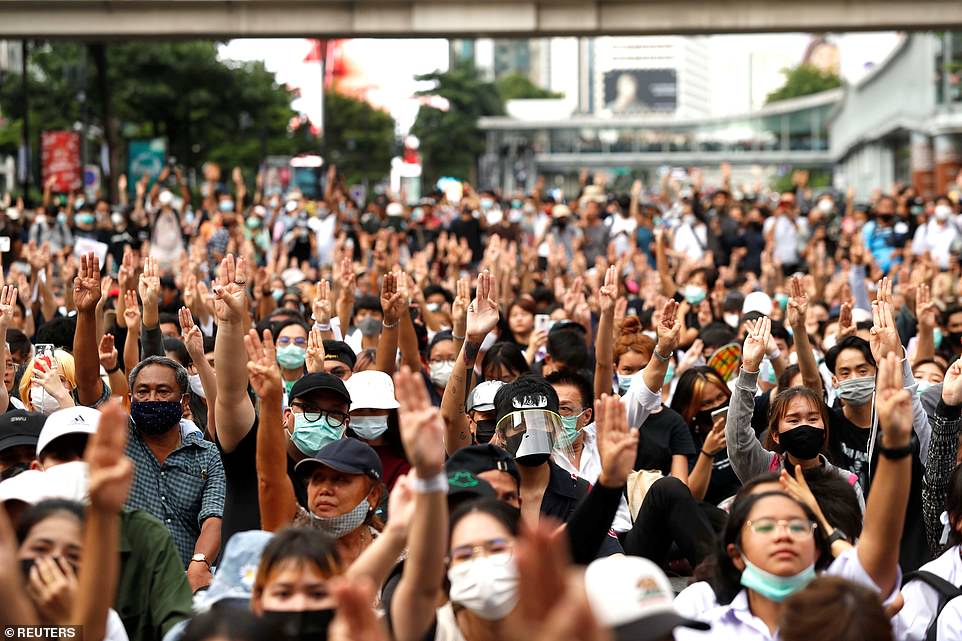 Protesters have adopted the three-finger salute gesture from the Hunger Games books, where it is used as a symbol of defiance by an oppressed population against an authoritarian ruling class 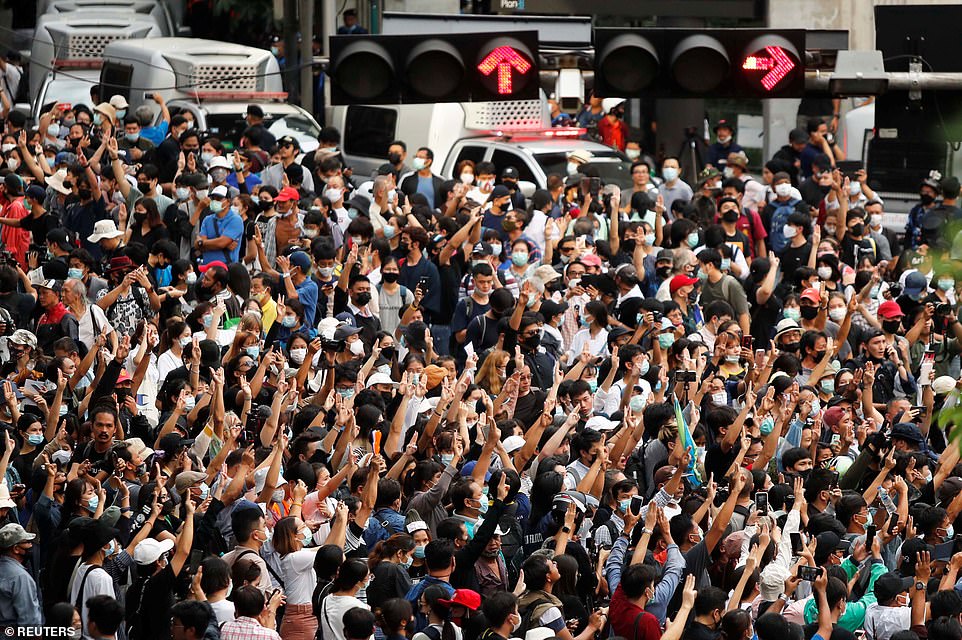 Activists continued to give three-fingered salutes in defiance of the government and monarch, leading an expert to warn that the country has now entered ‘dangerous territory’ 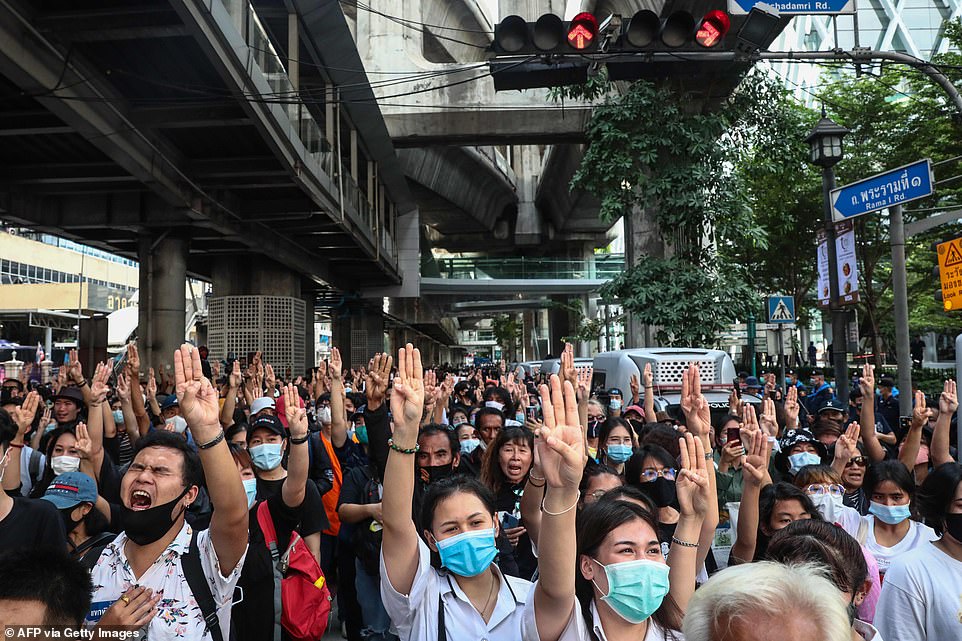 Protesters occupy one of the main thoroughfares in downtown Bangkok, as they face off with police just hours after riot officers cleared them off the streets 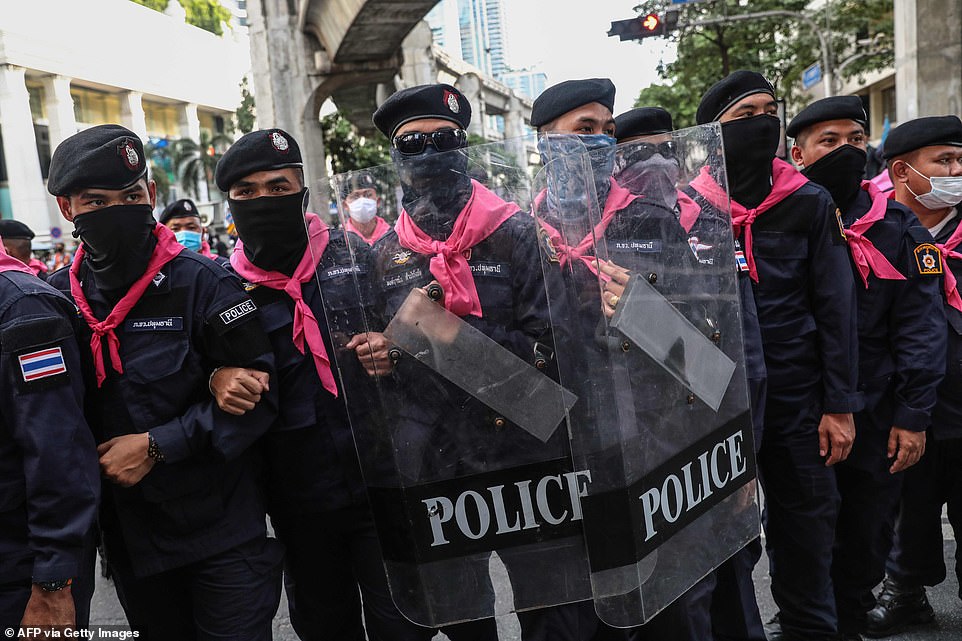 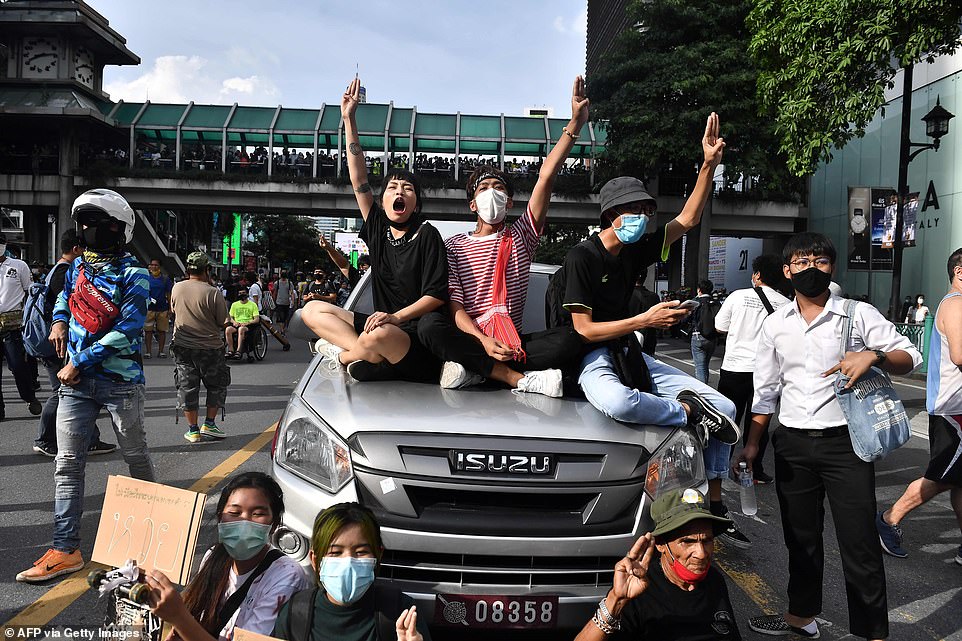 Experts warn that openly defying the monarch, who is typically revered in Thai society, has pushed the country into ‘dangerous territory’ and left it facing a ‘full-blown crisis’ 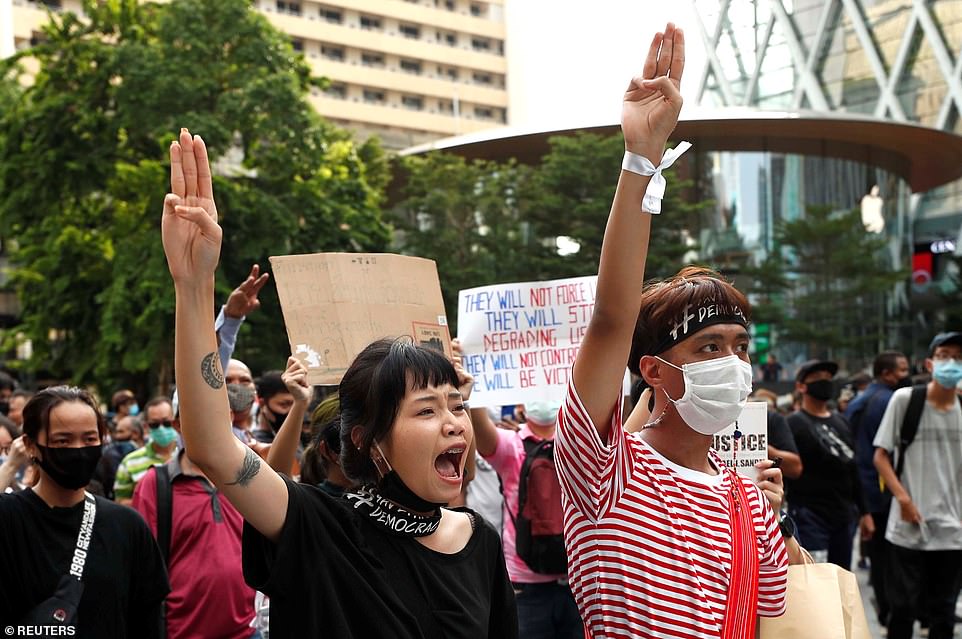 Pro-democracy protesters hold up three fingers in a gesture inspired by the Hunger Games, where it symbolises defiance by oppressed people against an authoritarian ruling class

Thai authorities declared a strict new state of emergency for the capital on Thursday, a day after a student-led protest against the country’s traditional establishment saw an extraordinary moment in which demonstrators heckled a royal motorcade.

After the pre-dawn declaration, riot police moved in to clear out demonstrators who after a day of rallies and confrontation had gathered outside Prime Minister Prayuth Chan-ocha’s office to push their demands, which include the former general’s stepping down, constitutional changes and reform of the monarchy.

Several top leaders of the protest movement were taken into custody, with one later declaring on his Facebook page that he had been denied access to a lawyer and was being forced onto a helicopter and taken to a city in the country’s north. Police said they had made 22 arrests.

The text of the emergency declaration said it was needed because ‘certain groups of perpetrators intended to instigate an untoward incident and movement in the Bangkok area by way of various methods and via different channels, including causing obstruction to the royal motorcade.’

The protest Wednesday in Bangkok’s historic district, not far from glittering temples and royal palaces, was the third major gathering by student-led activists who have been pushing the boundaries of what is considered acceptable – and legal – language by publicly questioning the role of Thailand’s monarchy in the nation’s power structure.

Thailand’s royal family has long been considered sacrosanct and a pillar of Thai identity. King Maha Vajiralongkorn and other key member of the royal family are protected by a lese majeste law that has regularly been used to silence critics who risk up to 15 years in prison if deemed to have insulted the institution.

The protest – held on the anniversary of a 1973 student-led uprising against a military dictatorship – was complicated by the presence of royalist counter protesters who had gathered both to show support for the government and to greet the royal family as they traveled to and from a religious ceremony in the area. 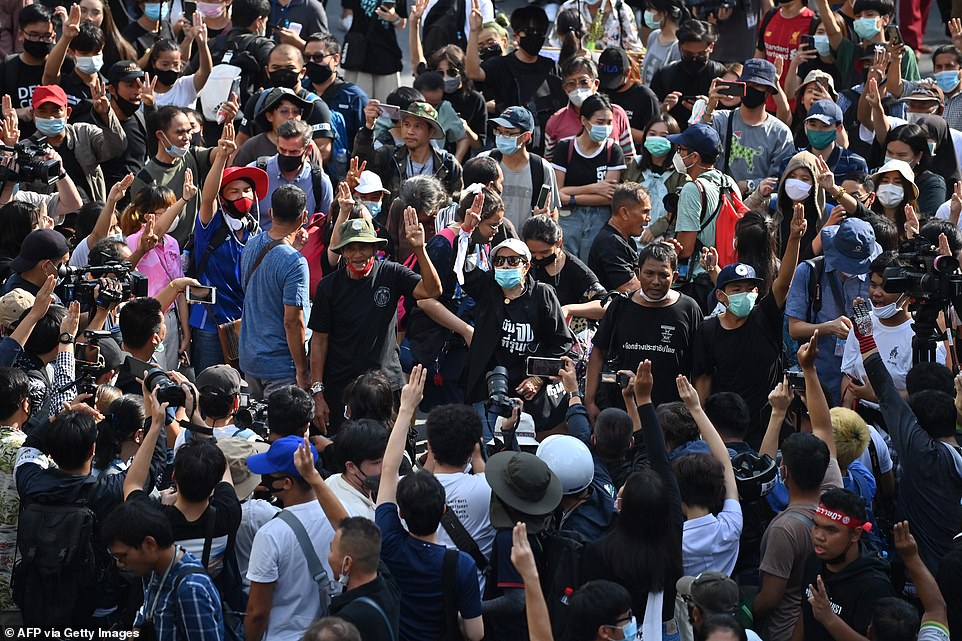 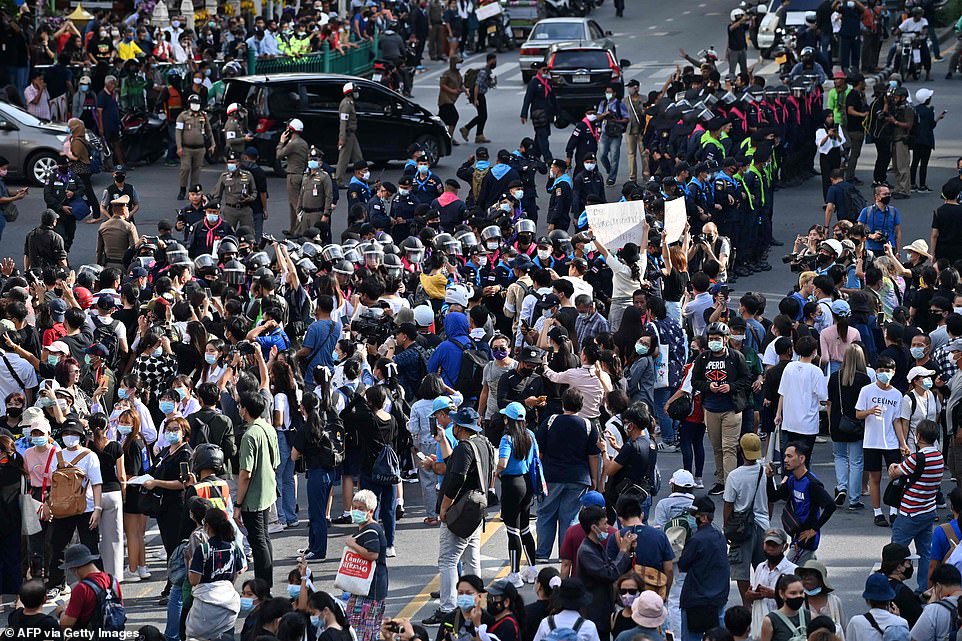 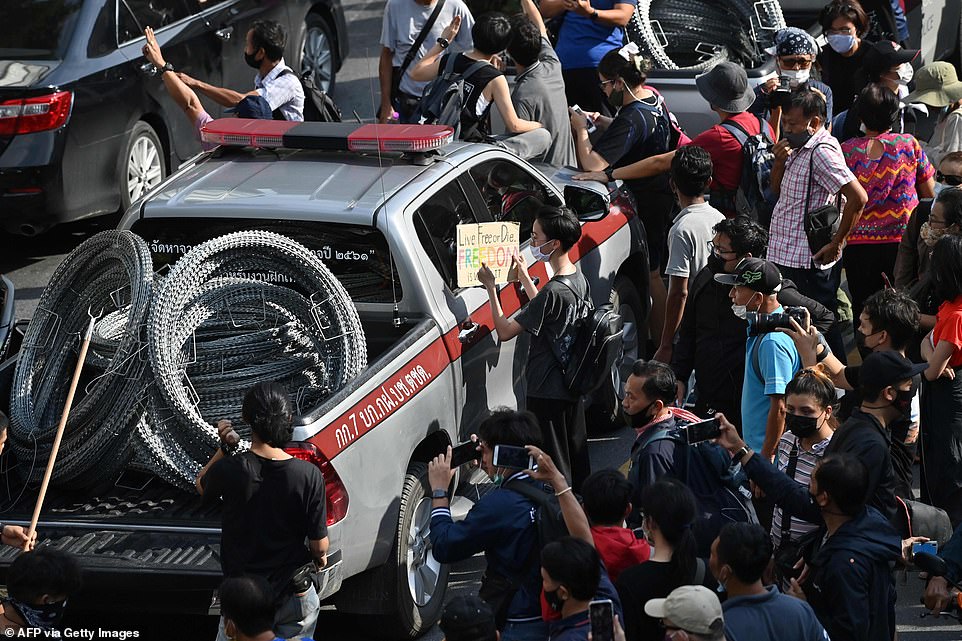 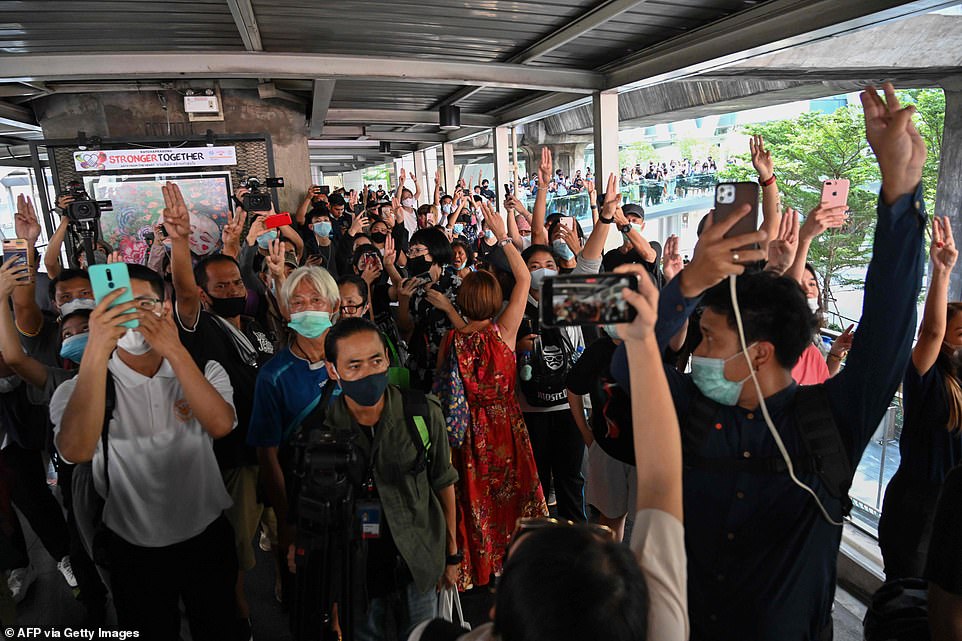 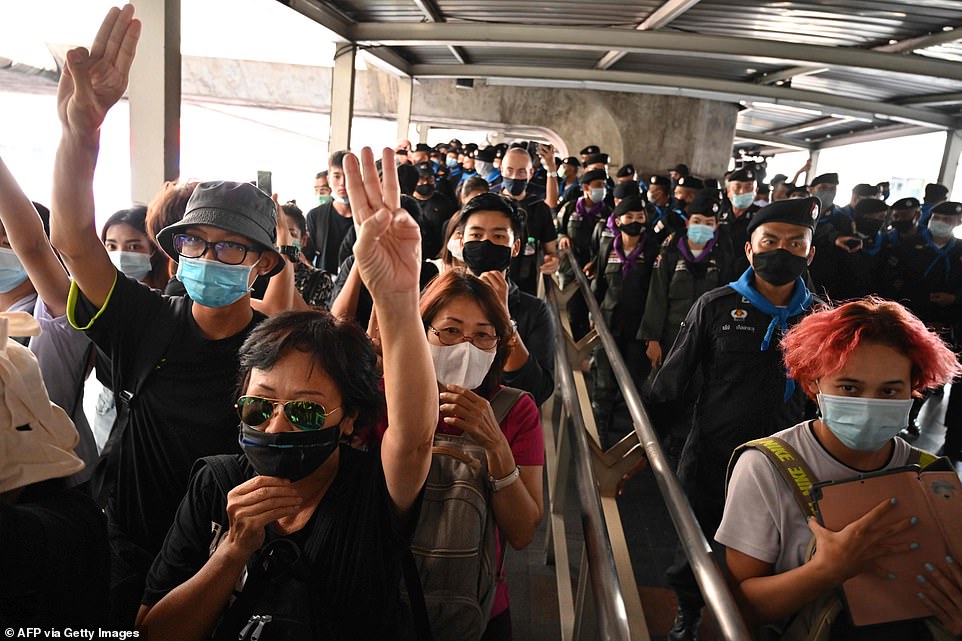 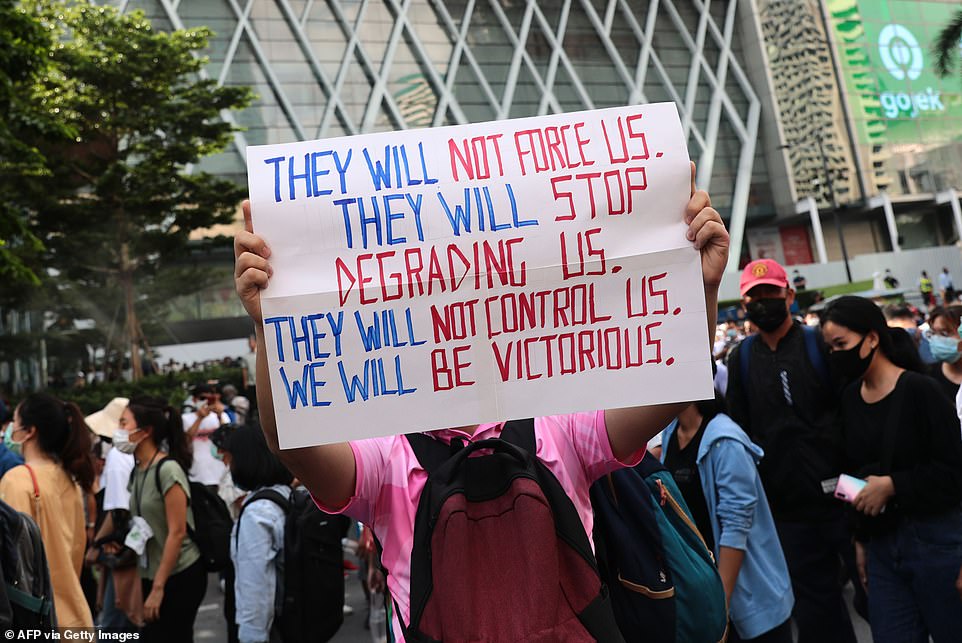 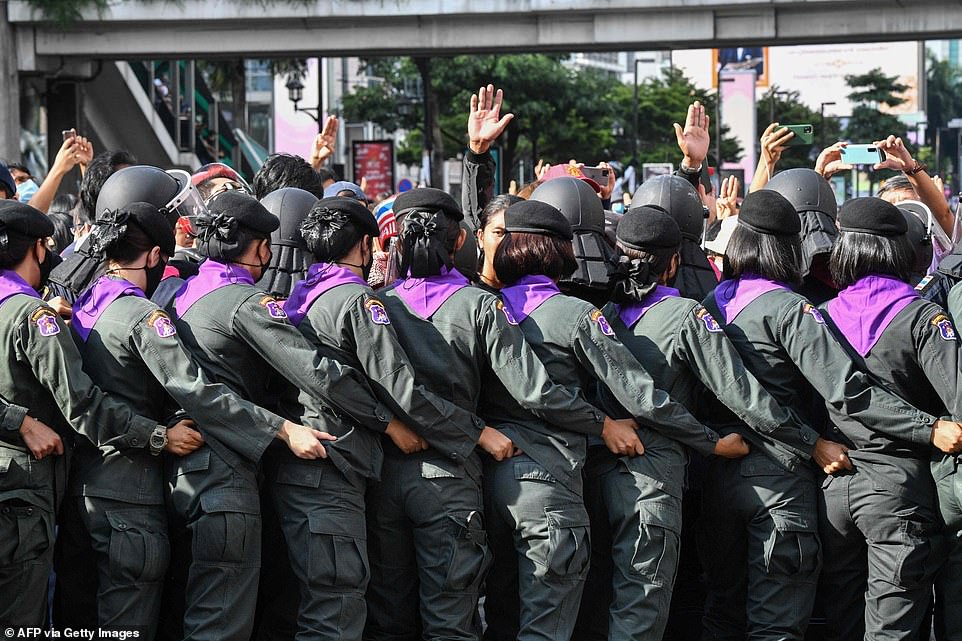 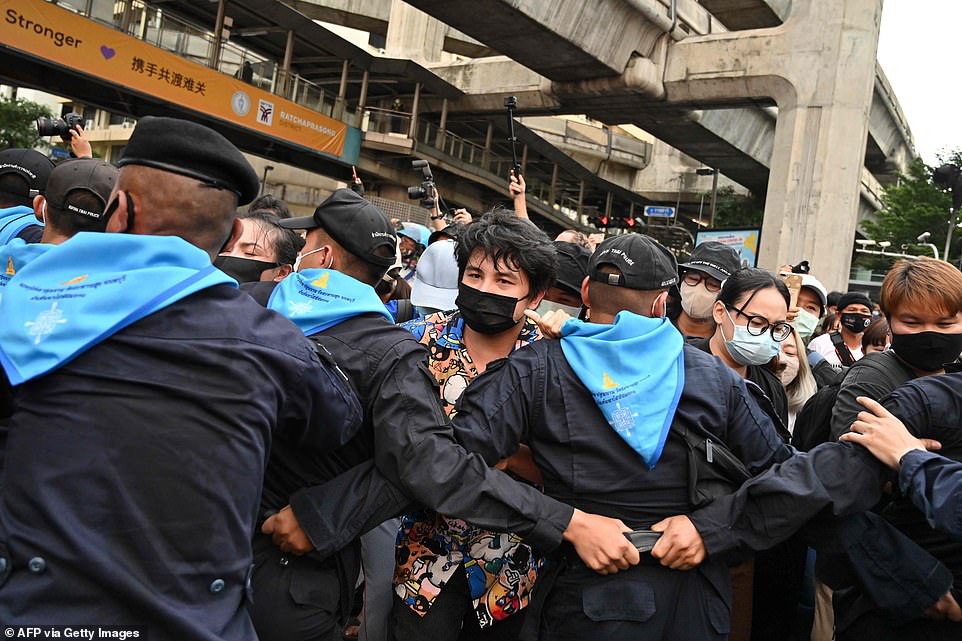 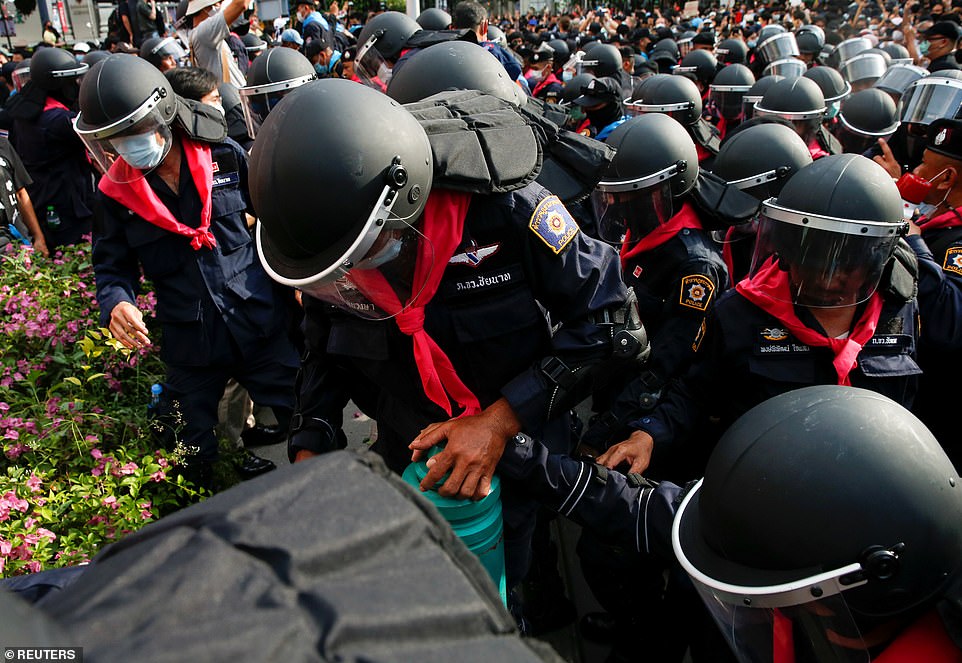 Police officers are seen during anti-government protests, in Bangkok

Government spokesman Anucha Buraphachaisri announced Thursday morning that the prime minister had ordered police to take strict action against those who obstruct a royal procession or otherwise insult the monarchy.

Keeping order will be facilitated by the new emergency decree for Bangkok, which bans unauthorized gatherings of more than five people and gives authorities other powers they deem needed to prevent unrest, including detaining people at length without charge.

It also outlaws the news that distorts information or could cause a ‘misunderstanding.’

Thailand is already under a national state of emergency as part of its efforts to fight the coronavirus, and it was not immediately clear how the new decree was different.

One change is that police said they will install checkpoints around Bangkok for security purposes.

Protesters were undaunted and said they would gather again in a Bangkok shopping district Thursday afternoon.

Deputy police spokesman Col. Kissana Phathanacharoen warned that calling for such a protest or attending one was against the law.

‘You cannot say that they are not aware of the order. We are making it clear,’ Kissana said at a news conference.

‘The scale of today’s early morning arrests seems completely unjustified based on yesterday’s events. The assemblies were overwhelmingly peaceful. 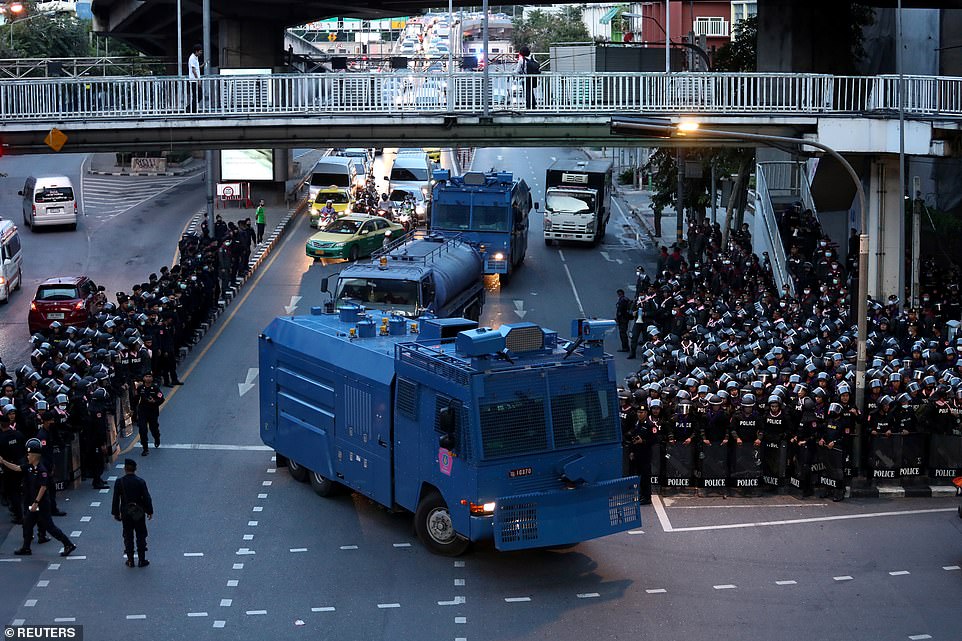 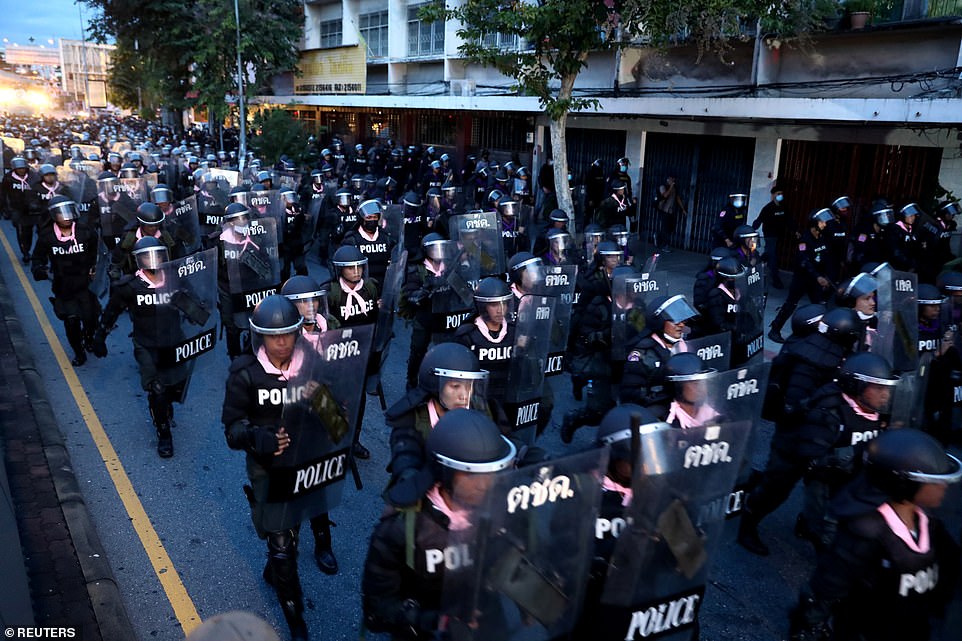 Clashes on Wednesday night and early Thursday morning between protesters and riot police during anti-government protests have been quelled, as an emergency decree was announced to combat the demonstrations 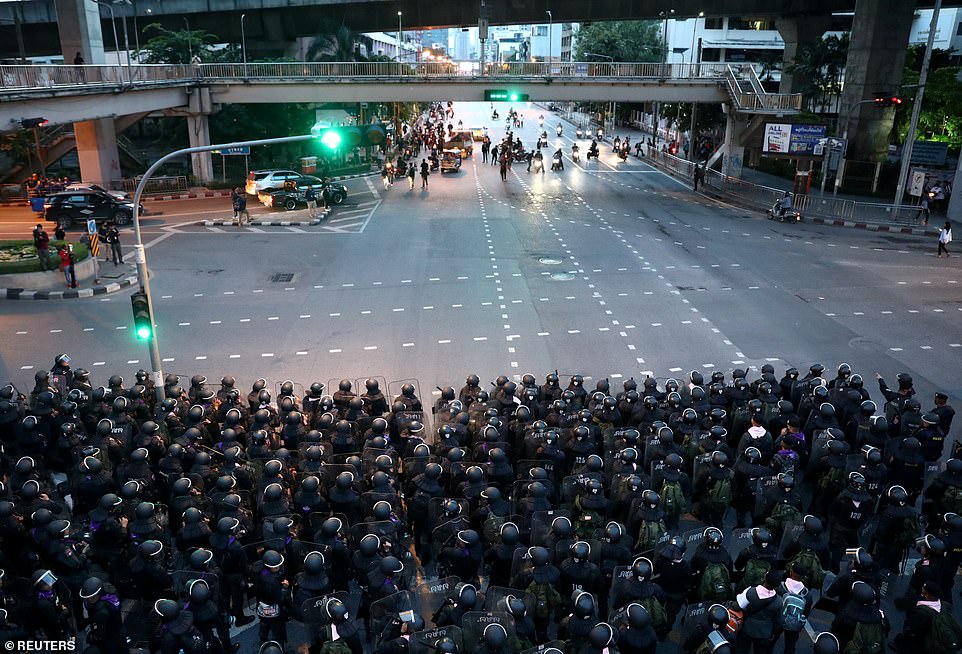 Shortly after the emergency decree took affect at 4 a.m. (2100 GMT), riot police advanced behind shields on protesters who had camped outside Government House in Bangkok (pictured) 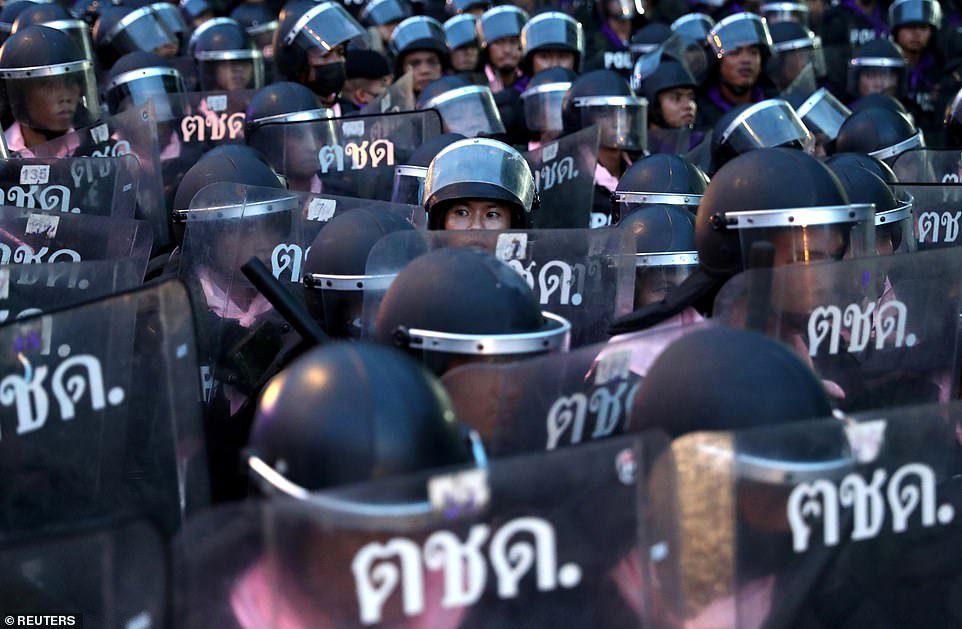 The decree also prohibits ‘publication of news, other media, and electronic information that contains messages that could create fear or intentionally distort information creating misunderstanding that will affect national security or peace and order’. Pictured: Police officers stand in position during a protest in the early hours of Thursday morning in Bangkok 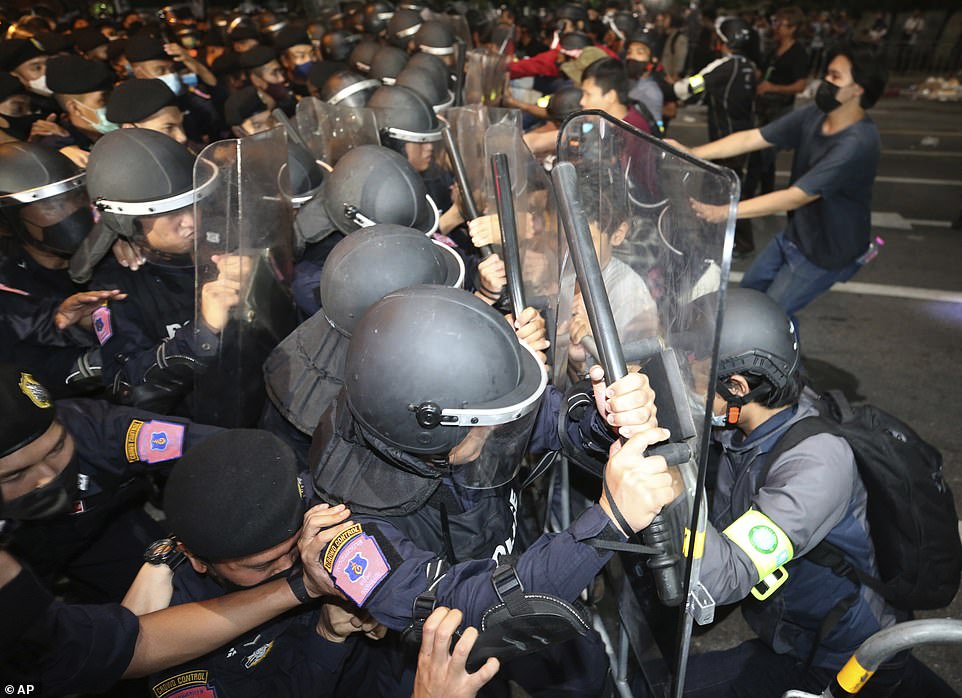 Some protesters tried to resist with makeshift barricades of garbage cans, but they were swiftly pushed back. By dawn, hundreds of police occupied the nearby streets and city workers began cleaning up

These moves are clearly designed to stamp out dissent, and sow fear in anyone who sympathizes with the protesters’ views,’ the group said in a statement.

The protest movement was launched in March by university students, but quickly put on hold as Thailand was gripped by the coronavirus pandemic. It came back in July, when the threat from the virus eased, and since grown in size.

The movement’s original core demands were new elections, changes in the constitution to make it more democratic, and an end to intimidation of activists.

The protesters charge that Prayuth, who as army commander led a 2014 coup that toppled an elected government, was returned to power unfairly in last year’s general election because laws had been changed to favor a pro-military party.

The protesters say a constitution promulgated under military rule and passed in a referendum in which campaigning against it was illegal is undemocratic.

The movement took another stunning turn in August, when students at a rally aired unprecedented criticism of the monarchy and issued calls for its reform. Airing their grievances in direct language normally expressed in whispers, the speakers criticized the king’s wealth, his influence and that he spends much of his time in Germany, not Thailand.

Conservative royalist Thais accuse the protest movement of seeking to end the monarchy, an allegation its leaders deny.

Nevertheless, analysts say the incident with the royal motorcade may harden positions.

It ‘is not just unprecedented but will be shocking for many,’ said Kevin Hewison, professor emeritus from the University of North Carolina and veteran Thai studies scholar.

‘Yet it is reflective of how a new generation of protesters sees the monarchy and military-backed regime as intertwined and that political reform demands reform of the monarchy as well.’ 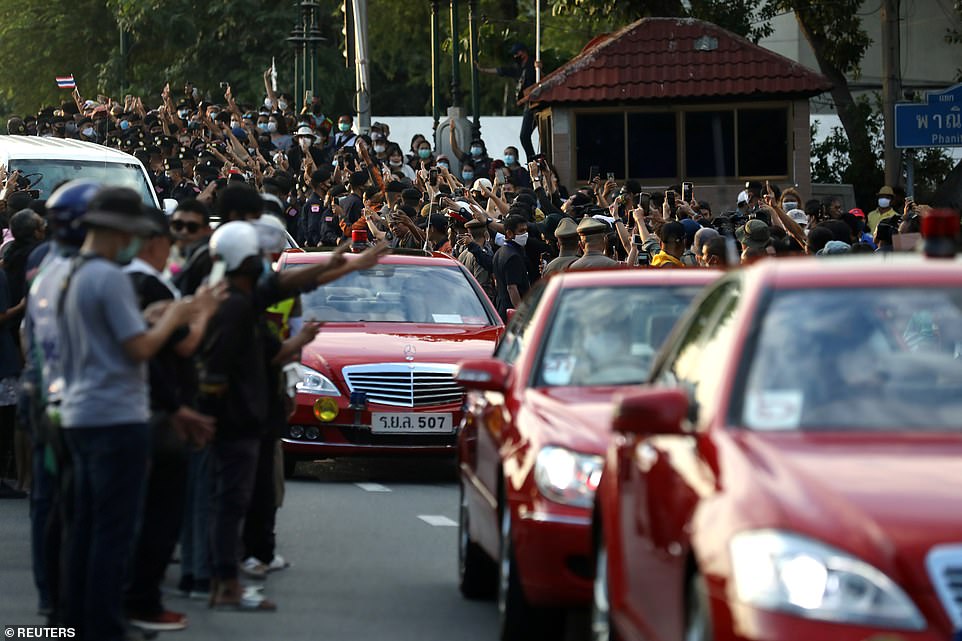 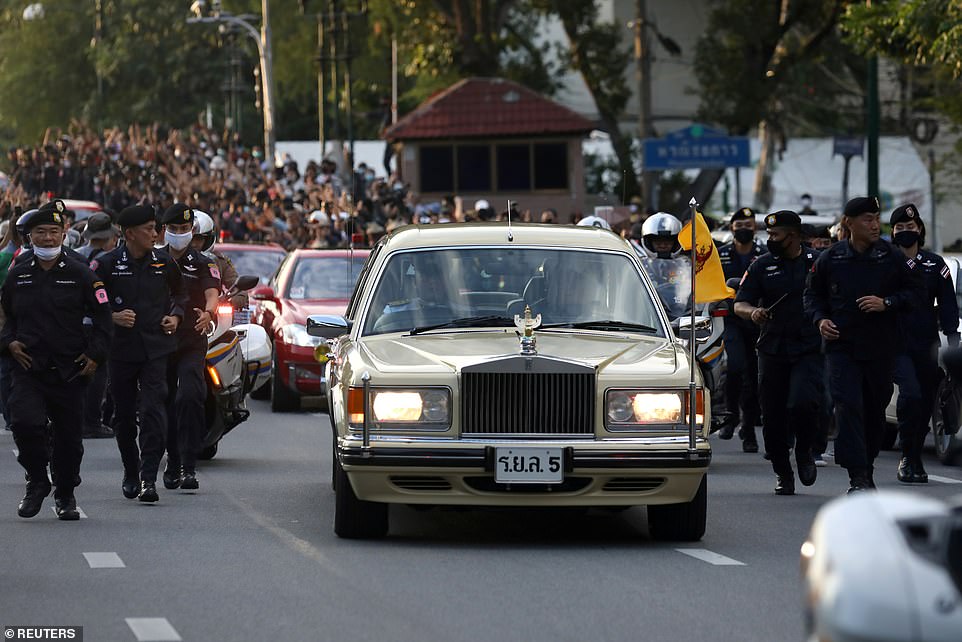 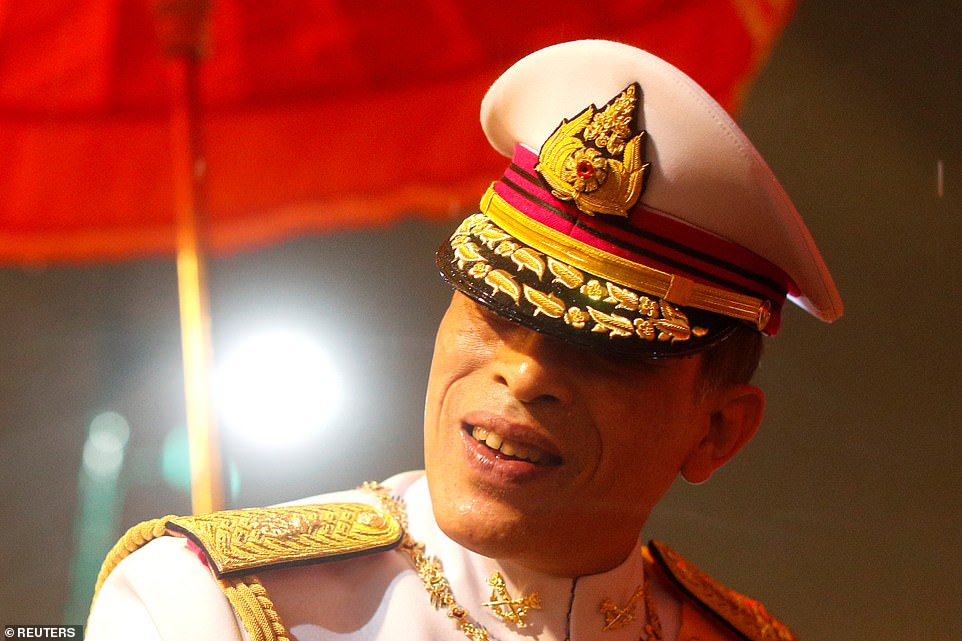