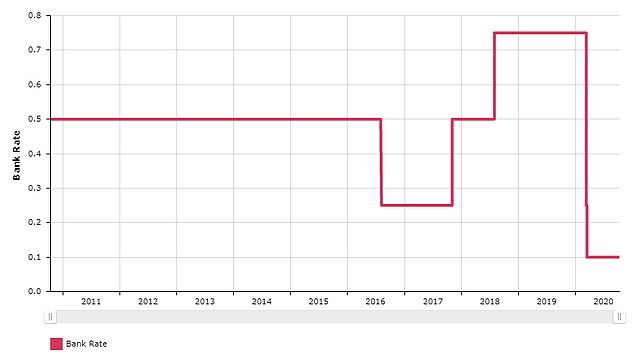 Will we really see negative interest rates or would they prove pointless? asks SIMON LAMBERT

Are we really going to get negative interest rates in Britain?

This will we, won’t we game has been going on for years, but it’s stepped up a notch since the coronavirus crash hit the economy and speculation is now hitting fever pitch.

This latest round of the negative rates guessing game has been triggered by the Bank of England telling banks to gear up for them.

Does that mean they are definitely on the way? I’m not so sure.

Is the next move down below 0%: A decade of super low interest rates is highlighted here

The Bank of England has told banks to be ready and bosses say that they can handle Britain’s first ever sub-zero Bank Rate – or base rate as it’s more commonly known.

This would seem a clear indication of the direction of travel, but I suspect the jury may still be out on the Monetary Policy Committee as to whether there is even any point in negative rates.

If base rate went below 0 per cent then savings rates could follow – meaning that rather than being rewarded by the bank for stashing your money in one of its savings accounts, you would instead be charged for the privilege.

In theory, this discourages over-saving. Those with larger pots of cash than they need would put it to a more economically productive use than parking it in a savings account, as the negative interest would erode its value.

Economics textbooks would suggest that a negative savings rate encourages spending – why save instead of spend if you are being charged for it? And it should push more into investing in bonds or shares, which ultimately means companies get more money to put to productive use.

The drawbacks are that a negative rate would also encourage people to hoard cash – the classic stick it under the mattress line – as they simply avoid bank accounts and opt for keeping their money in readies instead.

I always think this is a bit of a red herring though. In aggregate it could be a notable effect but individually it’s unlikely to carry much weight.

The list of people who’d keep £20,000 in their home rather than lose a bit of it to negative rates is surely fairly short.

And this is where the ‘negative rates discourage individuals saving in cash’ argument always falls down for me.

Base rate currently stands at 0.1 per cent and lots of savings accounts pay 0.01 per cent. (Although why a bank would choose to insult a customer like this rather than be honest and pay nothing always bemuses me.)

However, the best easy access accounts pay almost 1 per cent.

If base rate went negative, it is unlikely to go very negative and savings rates are even less likely to head too far below zero – but some accounts would still pay positive rates.

Savers, already infuriated by the low rates they are getting, would be even madder at negative rates, but would they just ditch saving altogether if they were losing 0.1 per cent a year? Probably not.

They’d either put up with it, or find a better savings account. Unless the Bank of England planned on banning accounts with positive savings rates, I’d be willing to bet you’d always be able to find one at zero or above.

However, it’s not savers that negative rates really target. It’s the banks themselves.

By making base rate negative, the Bank of England would effectively be charging commercial banks for holding money with it.

They would instead be encouraged to do something with their spare cash – they wouldn’t directly lend that money out because that’s not how things work – but they would use it to enable them to make more loans to consumers and businesses.

Competition to attract those businesses and consumers would theoretically pull down the interest they pay on loans and mortgages and stimulate demand to borrow, putting more money into the economy.

The problem is that it’s unclear whether negative rates actually do that.

We’ve never had them before in the UK, but they have been used in other countries and the ECB has had some form of negative rates since 2014. Economists are divided on whether this has actually done any good.

Yet, even setting that to one side, the issue at the moment is that the level of uncertainty caused by lockdown, coronavirus and the ensuing economic crash is so great that we might have something of a problem encouraging many businesses to borrow to invest and grow.

It’s more likely that more cheap money would just end up funnelled into the property market and driving up house prices, which is not the Bank of England’s desired effect of monetary policy.

I reckon there are enough members of the MPC who remain unconvinced enough by negative rates that we won’t see them voted in – for now, at least.