Eight albums into a career that began when she was a teenager fresh out of the BRIT School, Katie Melua could have played it safe. After all, she was hardly the most cutting edge performer when she made her name with her sweetly sung debut single The Closest Thing To Crazy and companion album Call Off The Search.

Those records were produced by Mike Batt and championed by Terry Wogan — and they successfully positioned Katie as the queen of easy listening pop. Rather than slipping into a rut, though, the singer, born in the former Soviet republic of Georgia, has matured into a surprisingly adventurous songwriter.

One of the sparks was her 2016 album In Winter. Made with the Gori Women’s Choir in Georgia, it appears to have emboldened the singer, 36, who moved to the UK after her heart surgeon father landed a job at the Royal Victoria Hospital in Belfast. Album No. 8, despite its prosaic title, is another intriguing move. It pairs Melua with the Georgian Philharmonic and British producer Leo Abrahams, a film composer who says he saw his string and brass parts as a Greek chorus commenting on Katie’s intimate lyrics. 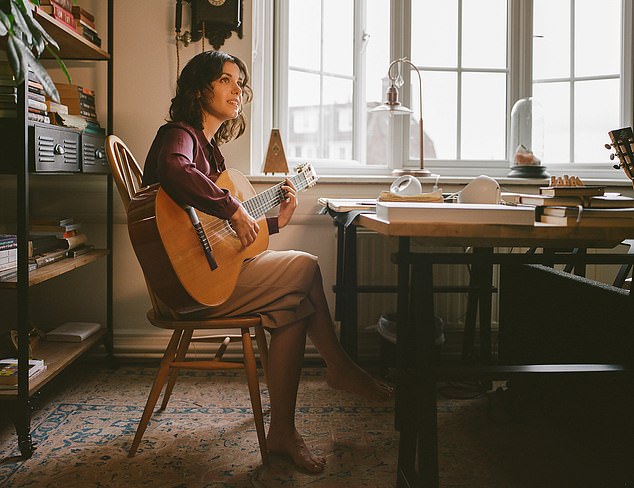 Eight albums into a career that began when she was a teenager fresh out of the BRIT School, Katie Melua could have played it safe

And she doesn’t hold back. The ten songs here, most of them ballads, were written as her seven-year marriage to motorcycle champion James Toseland was coming to an amicable end. It’s not quite a no-holds-barred confessional, but there’s a palpable sense of romantic fatigue.

On A Love Like That — all strings and guitars in the style of Minnie Riperton’s 1970s soul classic Les Fleurs — she wonders whether the hearts-and-flowers tingle of a new affair can ever stand the test of time. She maintains an unsentimental outlook on Joy (‘Well, I’m ready to end this game’) and Airtime (‘I think we’ve given love too much airtime’).

Her divorce doesn’t dominate totally. Her curiosity piqued by reading about traditional English and Scottish songs in Bob Dylan’s Chronicles, she blends folksy images with country-soul on English Manner before yearning for the simplicity of her Black Sea childhood on Leaving The Mountain and Heading Home, a piano ballad that recalls In Winter’s warm melancholy: ‘Round the hills and through the squares, we’ll pass the old boys playing chess,’ she sighs.

There are moments when Album No. 8 feels a little too tranquil in its easy-on-the-ear sophistication — Voices In The Night’s jazzy sax is a rare moment of frivolity — but Katie deserves credit for refusing to sit still.

Like a lot of young musicians, Filipino-British singer Beatrice Kristi — aka Beabadoobee — is in thrall to the past. The West Londoner, 20, spent part of her adolescence pretending to be a teenager from a bygone generation by listening to The Beatles and late American singer Elliott Smith on her Walkman cassette player.

Her debut album also wears its influences proudly on its sleeve. With its chiming, jangling guitars and pounding drums, it leans heavily on a strain of American alternative rock pioneered during the mid-1990s by the Smashing Pumpkins, Belly and Pavement.

The singer, who moved to the UK when she was three, began making music in 2017 after teaching herself guitar using YouTube. She spent lockdown at her parents’ house, and wrote the raw, confessional Fake It Flowers in her childhood bedroom, taking inspiration from its ‘arched walls, weird smells and Tom Hanks posters’. 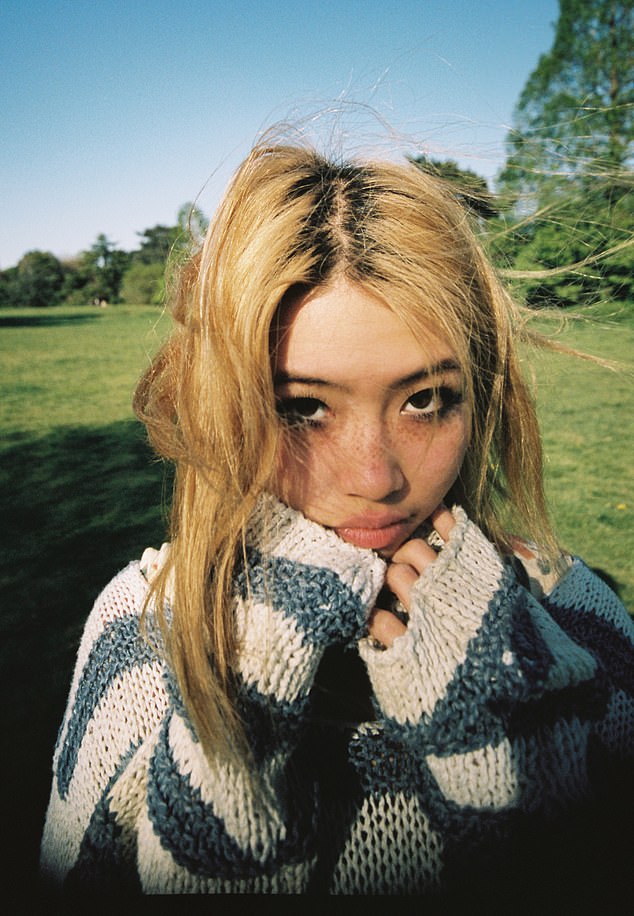 Like a lot of young musicians, Filipino-British singer Beatrice Kristi — aka Beabadoobee — is in thrall to the past

The upshot is a debut that’s scrappy and imperfect, but also riveting in its directness. The self-pity of recent single Care — ‘I guess I’ve had it rough, but you don’t really care, care, care’ — is accompanied by an infectious chorus. Dye It Red and the Blur-like Together are similarly catchy.

Beabadoobee describes Fake It Flowers as ‘a record for girls to cry to, dance to and get angry to,’ and it’s easy to see how she has connected with a legion of young, female fans in the same way as American singer Billie Eilish. She apologises for upsetting a pal on Sorry, nails an untrustworthy ex on Emo Song and admits to her own infidelity on Worth It. There’s brightness amid the youthful angst. Horen Sarrison is a love song with unexpected orchestral twists. At the other extreme How Was Your Day? — about neglected friendship — was made on a tape machine in her boyfriend’s garden.

For all its rawness, Fake It Flowers suggests Beabadoobee is a rock star in the making. ‘I’m immature and a bit dumb, but hopefully people will see I’m growing,’ she says. ‘This album represents that.’

The fourth album by Emma-Lee Moss — aka Emmy The Great — was inspired by a trip made to her childhood home in Hong Kong in 2017.

A snapshot of the city prior to the pro-democracy protests that began in 2019, it’s an account of her search for identity and a sense of belonging. The daughter of an English father and Chinese mother, she has also lived in New York City, and she draws on a variety of styles by augmenting her lush indie-pop with Cantonese vocals, singing bowls and field recordings of Hong Kong traffic lights that sound like drum machines. 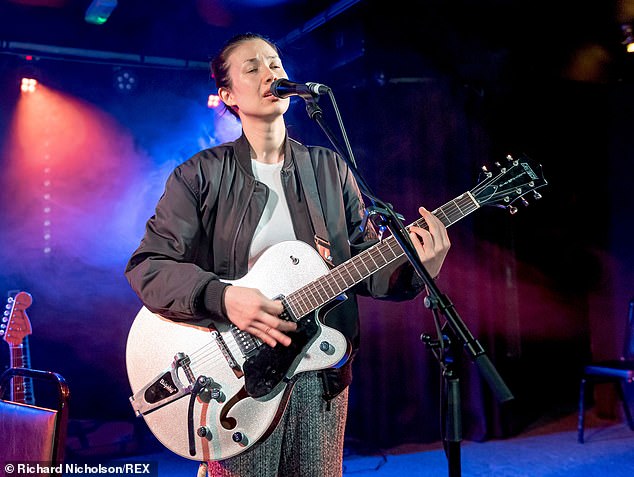 Her mix of East and West is at its sharpest on Chang-E, on which she cleverly links the American lunar landings of 1969 with a childhood fable about a Chinese queen who drinks the elixir of youth and ascends to the moon with a white rabbit.

Backed by her live band, she sings about the burst fire hydrants of Brooklyn and embraces Fifties doo-wop on Hollywood Road, named after a Hong Kong street. On the witty Mary, she relates how a bogus fortune teller warned that her life would go ‘off the rails’.

She’s back on track here.

Dame Shirley goes back to a diamond geezer

Dame Shirley Bassey shows she has lost little of her vocal power or perfect diction as she releases the title track of her forthcoming album as a single.

Produced by classical crossover stalwart Nick Patrick, orchestral ballad I Owe It All To You was penned by veteran lyricist Don Black, who co-wrote Bassey’s James Bond blockbuster Diamonds Are Forever.

Bluesy star Celeste’s new track Hear My Voice suggests that she, too, could be a future Bond theme contender. Taken from the new Netflix courtroom drama The Trial Of The Chicago 7, the track is a soaring ballad that reiterates the Brighton singer’s soul credentials. 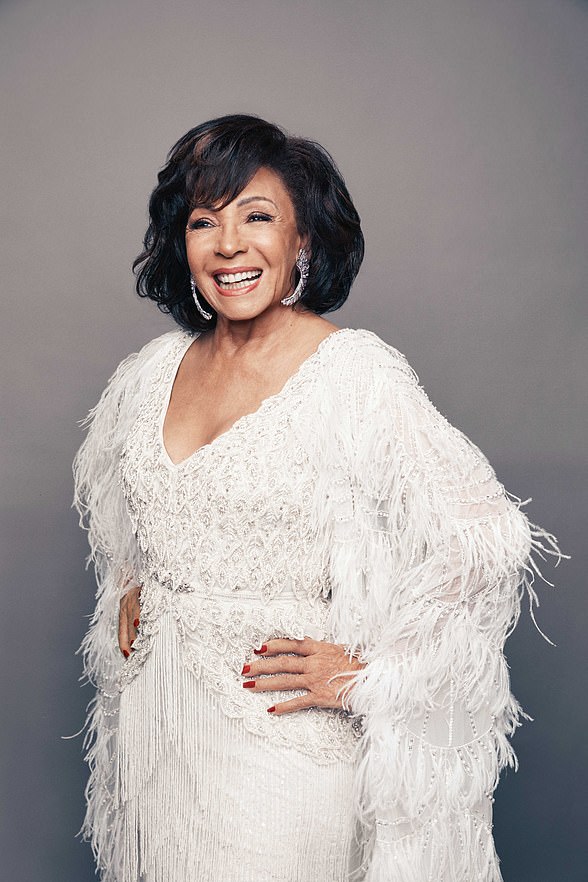 And Stevie Wonder unveils his first new music since the 2016 musical Sing by simultaneously releasing two new singles. The hip-hop-flavoured Can’t Put It In The Hands Of Fate is an anti-racist protest song harking back to Wonder’s socially-conscious 1970s albums, and Where Is Our Love Song is a soulful prayer featuring bluesman Gary Clark Jr. Bruce Springsteen has released a second track from forthcoming LP Letter To You. Driven by power chords, meaty drums and a singalong chorus, Ghosts salutes The Boss’s dearly departed bandmates, including the late Clarence Clemons, whose nephew Jake joined the E Street Band in 2012 and plays sax on a rock song steeped in nostalgia. A.T.