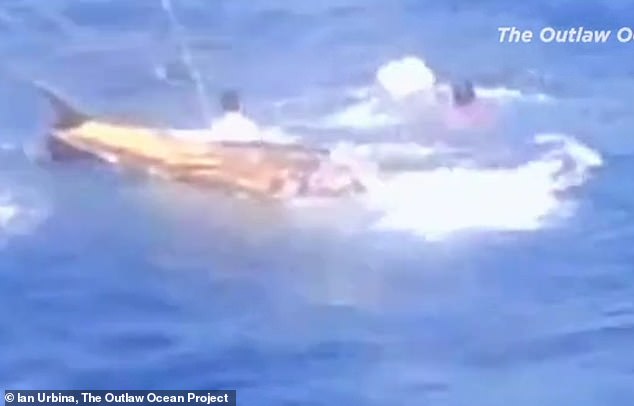 A Chinese captain has been arrested in Taiwan over the mysterious killings of a boat crew who were shot dead in the Indian Ocean eight years ago.

Horrifying footage shows the men being massacred in the water as they clung to the debris of a small boat, before a group of sailors laugh together on the fishing vessel Ping Shin 101 from which the shots were fired.

The killings are shrouded in mystery because the identities of the victims are not known, the Ping Shin 101 sank two years later and the nebulous laws of the ocean make the incident difficult to investigate.

But in August this year, the ship’s captain Wang Feng Yu was arrested after stepping ashore in Taiwan, according to prosecutors on the island. 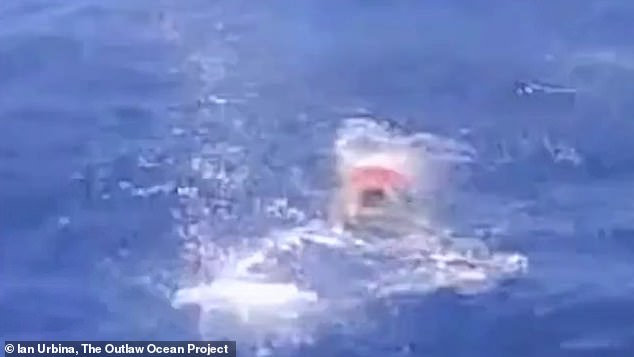 Forty rounds are fired and at least four people are killed in the footage at the orders of a man who shouted in Mandarin: ‘Fire! Fire! Fire!’

The video came to light in Fiji after a smartphone containing the footage was apparently left in the back of a taxi and uploaded to YouTube.

In the footage, a man is heard giving orders in Mandarin – ‘Fire! Fire! Fire!’ – before bullets are fired at the men struggling to stay afloat in the water.

Forty rounds are fired and at least four people are killed, some of them seen floating in the ocean with their blood contaminating the water. One of the shooters boasted that ‘I’ve shot five’.

The shooters are not visible, but a later segment shows people on the fishing vessel posing for selfies and apparently celebrating with each other.

One passing vessel is clearly visible, the Taiwanese-flagged Chun I No 217, but the location of the shootings remains unclear.

Fijian authorities looked at the video but closed their case in 2014, saying that the killings did not take place in their waters.

One Fijian fishing official claimed it had taken place as far away as Somalia, suggesting the victims were Somali pirates.

Taiwan’s fisheries agency also suggested in 2014 that the victims could have been pirates.

However, a Greenpeace investigation in 2016 said the evidence for this was ‘unconvincing.

Greenpeace said the victims’ boat appeared to be a small, wooden fishing vessel rather than ‘the faster type of vessel typically used by pirates’.

Another report by the Fish-I network, an alliance of African countries, said the victims may have been a Pakistani crew manning an Iranian vessel.

The crime ‘provides a strong indication of a state of lawlessness on the high seas where fisheries crime can take place with few, if any, consequences,’ it said. 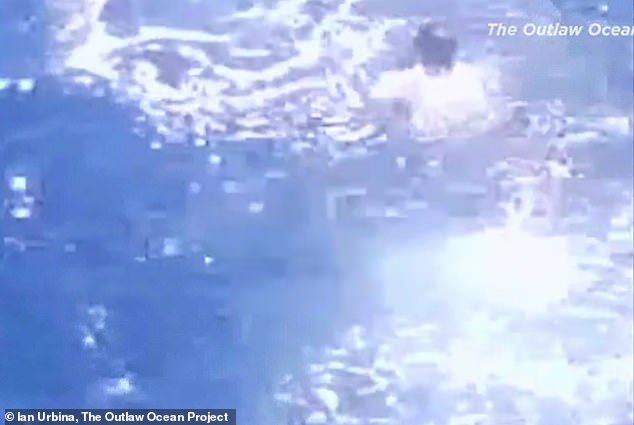 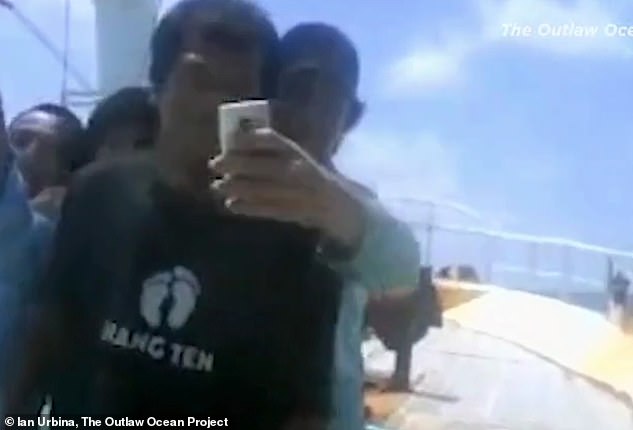 The crew of the Ping Shin 101 posed for selfies during the video, although it is not known whether any of these people were the shooters

The identity of the shooters is also unclear, but two Filipino deckhands have come forward to say they witnessed the killings.

One of them, Maximo, said that as many as 10 or 15 people could have been killed, adding that they did not appear to be pirates.

‘It was wrong, people getting shot. But there was nothing I could do about it,’ he said, according to a report by Ian Urbina of The Outlaw Ocean Project, written for Yahoo News.

Maximo and another deckhand, Aldrin, later told a private investigator that the Ping Shin had received a radio alert about pirates in the area.

The Ping Shin had three armed guards and there had been similar confrontations in the past which led to suspected ‘pirates’ being killed, the witnesses said.

Another former sailor on the Ping Shin said it mainly worked in Somali waters but also operated near the Seychelles.

In 2014, shortly before the footage was uploaded to YouTube, the Ping Shin sank in the Indian Ocean, a fact confirmed by maritime authorities in Australia.

All 20 crew members, seemingly including captain Wang, were rescued and taken to Sri Lanka after abandoning the Ping Shin in life rafts. 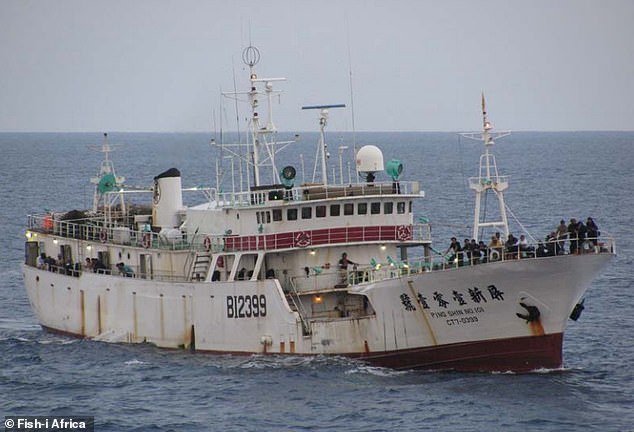 The fishing vessel Ping Shin 101 from which the shots were fired, and which sank in 2014 with its crew rescued and taken to Sri Lanka

Investigations into the killings made slow progress, partly because jurisdiction and law enforcement at sea are highly complicated.

The Chun I’s operators have acknowledged being in the area and its captain has apparently spoken to Chinese investigators, but it is not known what he revealed.

However, in 2018, prosecutors in Taiwan issued a warrant for Wang’s arrest and he was finally arrested in August 2020 after docking on the island.

Wang, who is said to be 43 and a Chinese national, was captaining a vessel called the Indian Star, according to Taiwanese media.

The Indian Star was said to have a series of violations to its name including illegal fishing and forged documentation.

Tseng Ching-ya, a spokesman for the prosecutor’s office, said in August that it was not clear whether Wang would co-operate.

‘We can’t exclude the possibility that the suspect will claim it was not a Taiwanese boat,’ he said.

But he added: ‘Now that we have the captain, we have a more direct way of questioning him about the whole ordeal.’