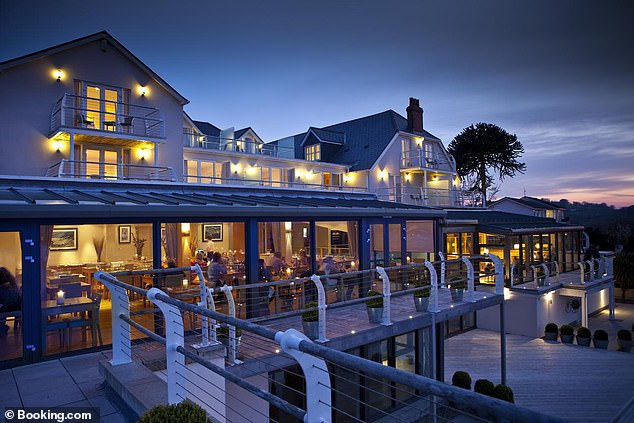 Hotels in Britain have suffered from a collapse in bookings with some losing more than half of them after the new three-tier local lockdown system was brought in.

Families worried about local coronavirus rules in UK towns and cities are instead looking at half-term holidays abroad in countries without a quarantine requirement.

Interest among Britons in searching for package holidays to the Greek islands of Zante, Santorini, Kos and Rhodes in October has boomed in the last week and a half.

Meanwhile accommodation providers in the UK are now reporting a huge rise in cancellations for what was already set to be a quiet half-term by normal standards.

Holidaymakers have become confused by the varying restrictions between areas and many are unsure if certain areas will allow them to stay with another family.

Andrew Evans, the owner of St Brides Hotel in Pembrokeshire, Wales, said his projected occupancy for October had fallen from 75 per cent to 20 per cent and now ‘virtually to zero’. 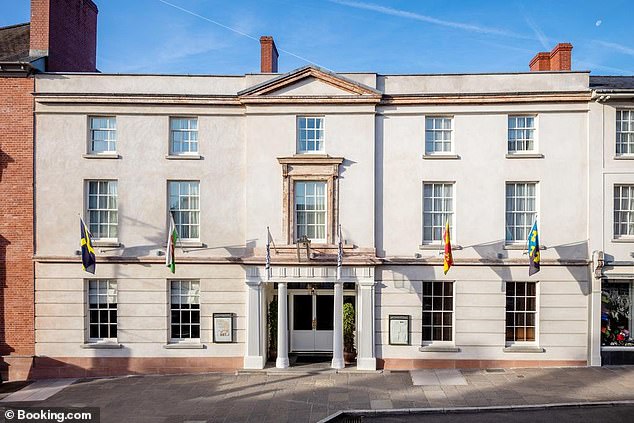 William Griffiths, owner of The Angel Hotel in Abergavenny, Monmouthshire, said he had an occupancy rate for the half-term week of just 15 per cent, compared to 70 per cent last year

Tom Hughes, from holiday let firm Clickstay, said his clients were unsure of how rules apply in different settings, adding: ‘The rule of six is causing a bit of confusion.

He told the Daily Telegraph: ‘People are asking me if it’s OK for two families to go to a hotel staying in two rooms, is it OK to rent a four-bedroom holiday rental? It’s a contradiction in people’s minds.’

Most popular half-term searches by Britons for holidays abroad

These are the most popular half term searches/where people are looking to head for half term, in the last week, according to TravelSupermarket:

Andrew Evans, the owner of St Brides Hotel in Pembrokeshire, Wales, told the newspaper that his projected occupancy for October had fallen from 75 per cent to 20 per cent and now ‘virtually to zero’.

And William Griffiths, owner of The Angel Hotel in Abergavenny, Monmouthshire, said he had an occupancy rate for the half-term week of just 15 per cent, compared to 70 per cent last year.

It comes as the UK announced last night travellers from Italy must now quarantine for 14 days after arriving in Britain.

The change, which takes effect from 4am on Sunday, is a blow to half-term holiday hopes to Italy and means the vast majority of European countries are now blacklisted under the Government’s travel quarantine rules.

But in a small consolation to the crippled aviation industry, Crete was granted a travel corridor in last night’s changes – meaning it is one of few options for quarantine-free autumn sun.

Other holiday hotspots staying on the travel corridor are Cyprus, mainland Greece and some Greek islands.

Package holiday searches on TravelSupermarket between October 8 and 14 compared with October 1 to 7 are up 1,535 per cent for Zante, 892 per cent for Santorini and 77 per cent for Rhodes.

Total searches to Greece are up 146 per cent week-on-week, while Zante has gone up from 56th to eighth in the most searched-for destination. 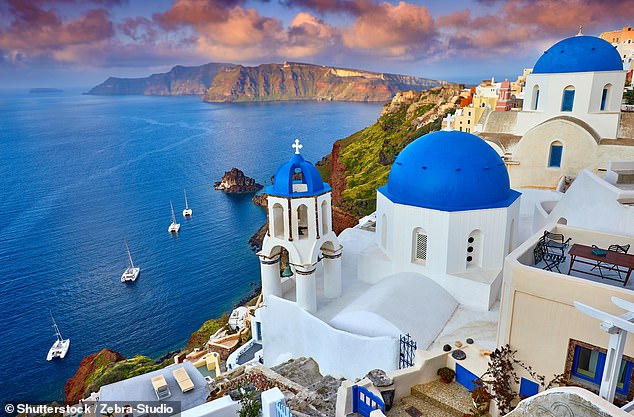 Santorini (pictured) is the most popular half term searches/where people are looking to head for half term, over the last week, according to TravelSupermarket 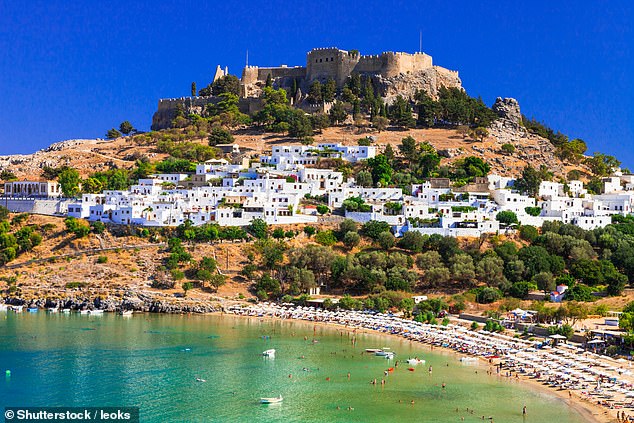 Rhodes (pictured) has now overtaken Turkey to become the most popular choice for a late October escape, having previously been in ninth place, according to TravelSupermarket

And Rhodes has now overtaken Turkey to become the most popular choice for a late October escape, having previously been in ninth place.

These are the top ten most booked destinations in the last week for any late October travel, not just half term:

Arrivals from Germany, Sweden, Estonia and San Marino are also free from quarantine requirements, although rising infection rates mean many of those places are at risk in the weeks to come.

She told MailOnline: ‘Turkey looked like it would be Brits’ most popular destination for the end of season. But the Government’s decision on October 1 to put it on the 14-day quarantine list put paid to that.

‘People are reading up on which destinations don’t have UK quarantine restrictions and opting to travel to them instead of their usual favourites which the Government is now advising against travelling to.

‘Brits would typically head to destinations in Spain and Portugal at this time. Still wanting sun, they are instead opting for destinations such as Zante or Kos which they wouldn’t necessarily have ordinarily considered. So, it isn’t a terrible picture for all outbound travel.’

She added that destinations which have stayed off the Government’s quarantine list – such as Kos, Rhodes and Corfu – or which have recently been taken off – Santorini and Zante – are benefitting from business, which they might not have had otherwise. 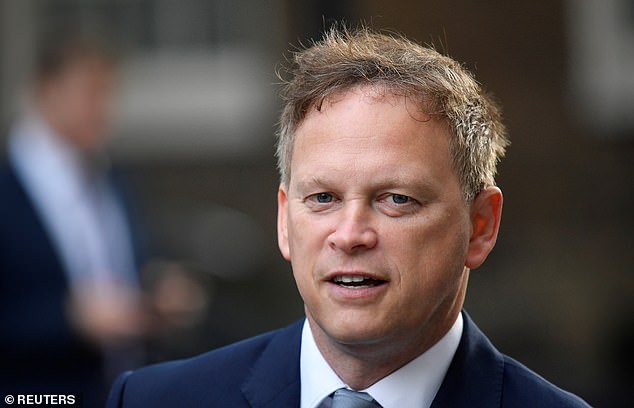 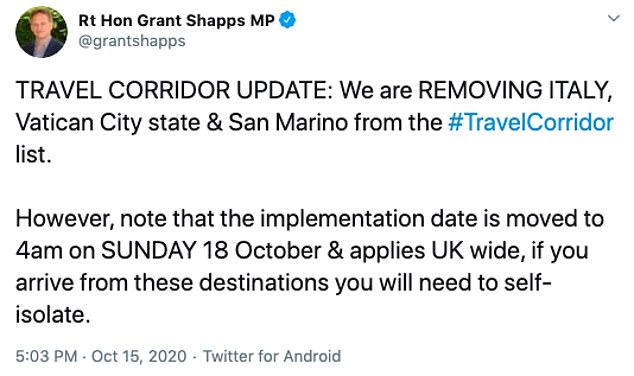 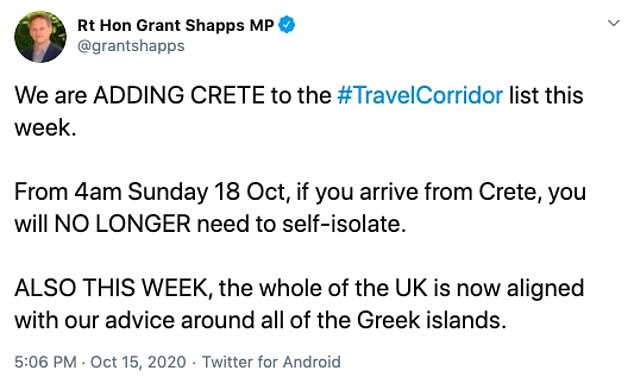 ‘Madeira and Cyprus, Barbados and Sicily are also benefitting following the Government advice changes, which they wouldn’t normally see at this time of year.

What are the latest changes to the UK’s travel quarantine list?

Transport Secretary Grant Shapps has announced further changes to the UK Government’s travel quarantine exemption list, removing three countries and adding one. Here is a guide to how the latest update will affect travellers:

– Which countries are being removed from the quarantine exemption list?

Italy, San Marino and Vatican City State are being taken off the Government’s travel corridor list. This means travellers arriving in the UK from these places after 4am on Sunday will be required to self-isolate for 14 days. San Marino, one of the world’s smallest countries, is landlocked within the north east of Italy. Vatican City State, home of the Pope, lies within Italy’s capital, Rome.

– Has anywhere been added to the travel corridor list?

Yes, the Greek island of Crete will be added to the exemption list for people returning to England. The Government said the risk to public health from those arriving from the island ‘has decreased to an acceptable level’. It means that from 4am on Sunday, passengers arriving in England from Crete will no longer need to self-isolate, provided they have not been in or transited through any other non-exempt countries in the 14 days prior.

– I’ve got a holiday booked to a country that is not on the travel corridor list, what should I do?

The Foreign Office advises against non-essential international travel at this time, except to certain countries and territories listed on its website that are deemed as ‘not posing an unacceptably high risk to British travellers’. However, anyone travelling to somewhere exempt from the non-essential travel advice may still need to self-isolate on their return to the UK if the country is not also on the travel corridors list. Those who decide to travel to a country after a quarantine rule has come into force will have to self-isolate for two weeks on their return.

The decision to add Italy and its islands to the Department for Transport ‘red’ list was taken after days of sharply rising infection rates. Vatican City and San Marino have also been added.

Although this far exceeds the Government’s quarantine threshold of 20, it is far lower than the UK’s current rate of 165.5 infections per 100,000 people.

Travel bosses have questioned the logic of forcing arrivals to quarantine from countries with lower infection rates than the UK, but ministers have so far resisted calls to ditch the disastrous 14-day quarantine rules.

The policy, coupled with the lack of progress on air passenger testing, has been blamed for destroying Britain’s once-thriving travel industry.

According to one senior industry figure, the size of the sector in terms of revenue and job numbers has shrunk by 50 per cent since March.

Travel consultant Paul Charles, of the PC Agency, told the Daily Mail: ‘The current system has to be abandoned and replaced with a proper testing programme which involves shorter quarantine.

‘We can’t have this situation last until March or April. Europe is effectively becoming a no-go zone. There are now very few countries where you don’t have to quarantine on your return.’

An estimated 20,000 Britons in Italy now face a dash to return before quarantine restrictions kick in at 4am tomorrow.

Under the rules introduced in June, passengers must complete online ‘passenger locator’ forms providing contact details and the address where they intend to self-isolate for 14 days.

If they refuse to fill out the form, they risk a £100 fine or £1,000 if they are caught breaching quarantine.

A Department for Transport spokesman said: ‘Coronavirus has profoundly changed the nature of international travel.

‘Travellers should always check the latest advice from the FCDO to keep up to date with the latest information on the risks associated with travel to another country, as well as the entry rules and measures introduced by local authorities that may affect British travellers.

‘All travellers, including those from exempt destinations, will still be required to show a complete passenger locator form on arrival in the UK unless they fall into a small group of exemptions.’