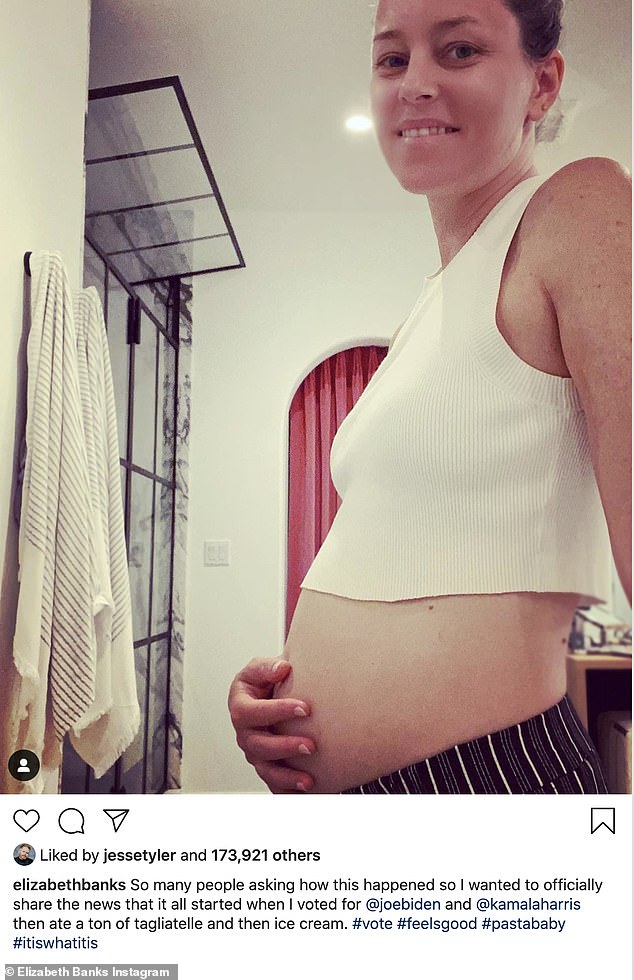 She’s revealed earlier this week that she cast her vote ahead of November 3 for former Vice President Joe Biden and California Senator Kamala Harris.

And Elizabeth Banks joked about voting on Thursday as show showed off her stuffed tummy in a selfie posted to Instagram.

The 46-year-old actress and director pretended that she was expecting a ‘pasta baby’ and blamed voting and eating plenty of tagliatelle and ice cream.

Having a laugh: Elizabeth Banks, 46, joked that her overstuffed tummy was the result of voting for Joe Biden and Kamala Harris, plus eating ‘a ton of tagliatelle and then ice cream’

‘So many people asking how this happened so I wanted to officially share the news that it all started when I voted for @joebiden and @kamalaharris then ate a ton of tagliatelle and then ice cream,’ she joked.

In her photo, Elizabeth highlighted her clear skin and wore a white ribbed cropped tank top and a pair of black and white striped pants while cradling her tummy with one hand and smiling for the camera.

Though she made light of her fake baby bump, Elizabeth opened up back in November about feeling ‘judged’ for using a surrogate to deliver her two sons, Felix, nine, and Magnus, seven, whom she shares with her husband Max Handelman, 47.

The actress told Porter magazine that she used a surrogate due to fertility issues.

‘I definitely think I’m still judged for what I’ve done and that people don’t understand my choices, but I don’t feel I owe anybody any explanation. And if my story helps people feel less alone on their journey, then I’m grateful for that,’ she said. 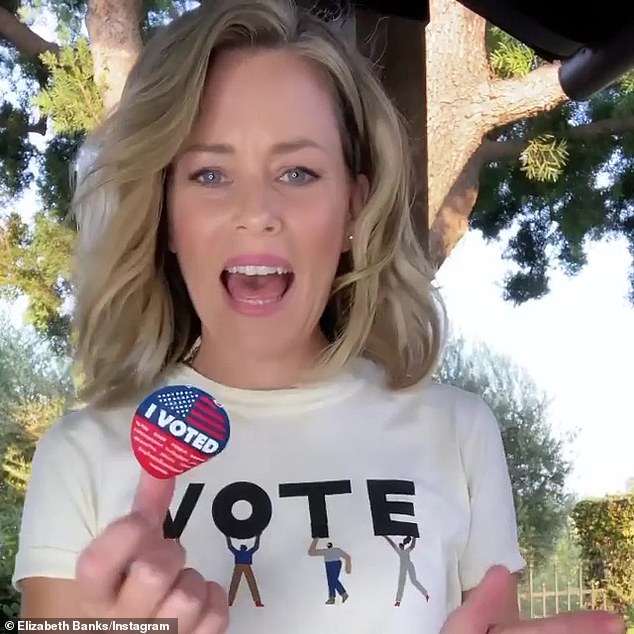 Civically engaged: Elizabeth has been unabashed on social media recently about her politics. She revealed on Tuesday that she had voted early for Biden and Harris in a short video clip 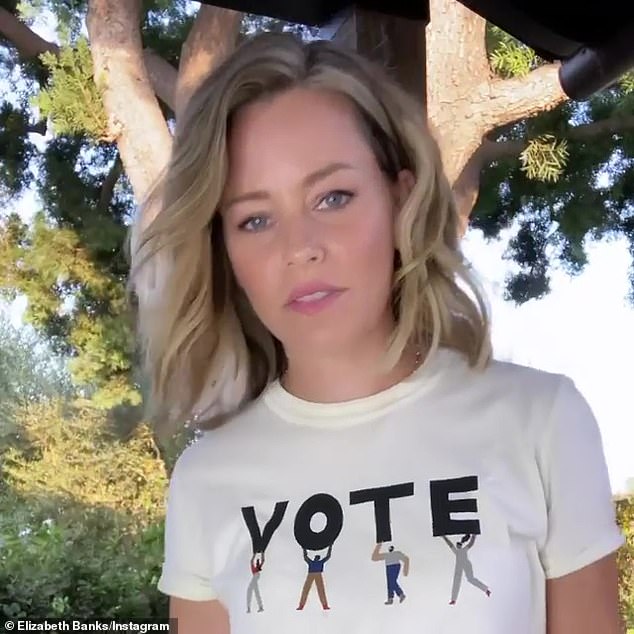 Spreading the word: ‘Guys, have you voted yet, or what? ‘Cause I voted,’ she said, breaking into song on the answer

Elizabeth has been unabashed on social media recently about her politics.

She revealed on Tuesday that she had voted early for Biden and Harris in a short video clip in which she waved around her ‘I Voted’ sticker.

‘Guys, have you voted yet, or what? ‘Cause I voted,’ she said, breaking into song on the answer.

‘#Voted early,’ she wrote in the caption. ‘I made a plan and it has been executed. Also, I don’t mind telling you I voted #bidenharris2020.’

In recent days, the comic star also shared posts advocating for gun safety measure, and she shared a post in her Insta Stories about the right to access an abortion in the US. 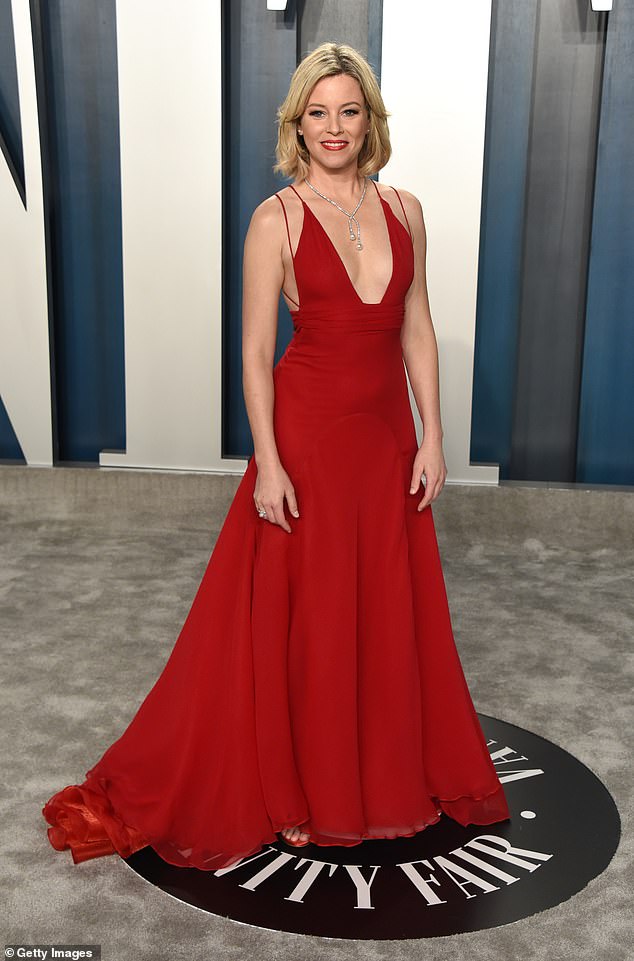 Triple threat: After establishing herself as an in-demand actress, Elizabeth expanded into directing her own films, including Pitch Perfect 2 and Charlie’s Angels; shown in February

After establishing herself as an in-demand actress, Elizabeth has recently expanded into writing and directing her own films.

She directed Pitch Perfect 2 (2015), which she also appeared in, and most recently she wrote and directed the Charlie’s Angels reboot from last year.

Her next big acting project will be in the upcoming Johnnie Cochran biopic Signal Hill, which stars The Avengers’ Anthony Mackie as Cochran and Jamie Foxx as Black Panther leader Elmer ‘Geronimo’ Pratt.

Elizabeth was cast as the journalist Mary Neiswender, who investigated the case of a black man who allegedly hanged himself in jail over his distress at getting a speeding ticket.

Cochran had the man’s body exhumed, and a second autopsy indicated that he had been strangled, resulting in a million-dollar settlement for his family. 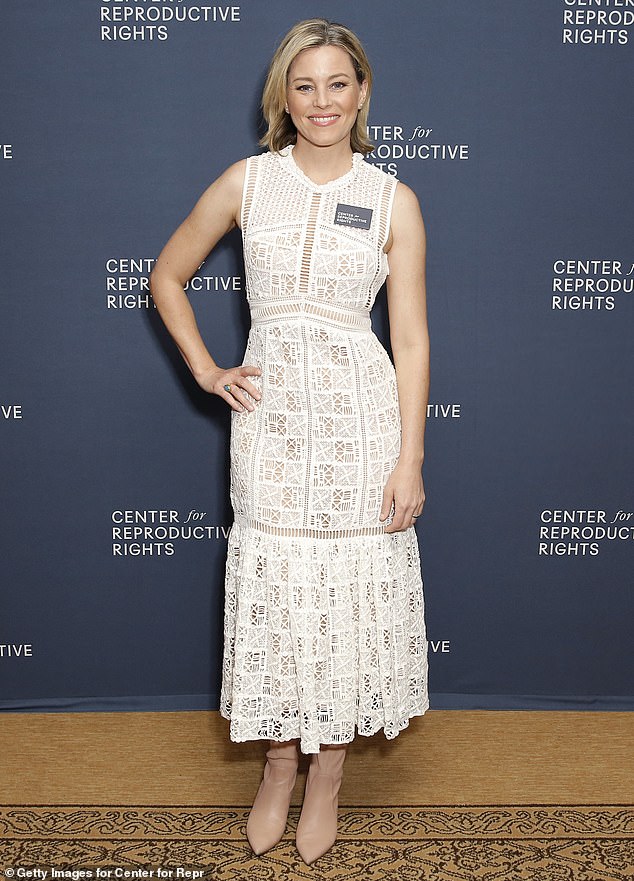