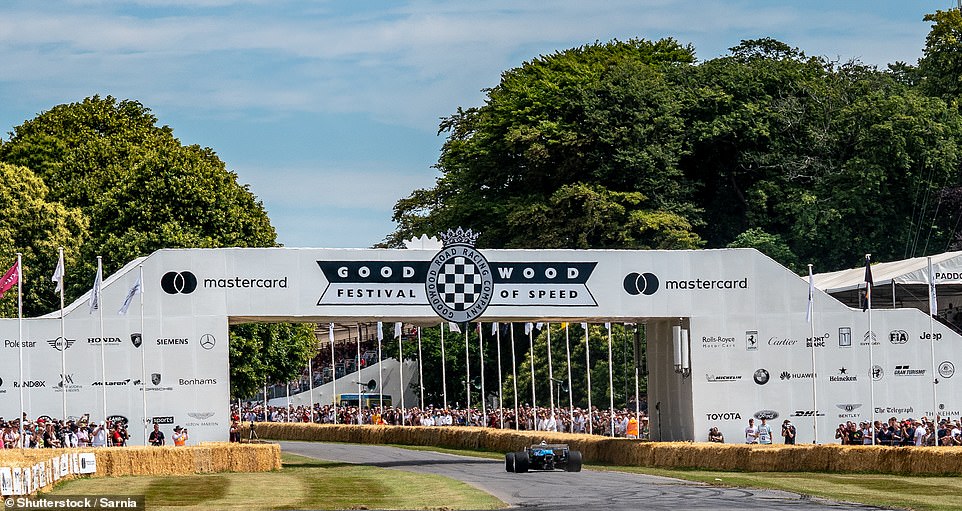 Motorsport fans have been deprived of the opportunity to watch classic racers go wheel-to-wheel or rocket up the famous Goodwood hillclimb this year, but they can still get their fix of action from home.

A musical tribute to the late racing legend Sir Stirling Moss by his rock star friend Mark Knopfler, a 50th anniversary cavalcade of 50 Range Rovers, and more motor racing and supercar action than you can wave a grand prix chequered flag at are among the highlights of the first ever virtual Goodwood SpeedWeek.

It has opened its doors to the lockdown public, with a host of motor racing stars, celebrities – and most importantly classic and exotic cars driven as intended, all of which can be watched online.

This year will see the first ever virtual Goodwood SpeedWeek, with a host of events and races that can be watched online. Above, a shot from the annual motoring event in 2019

Goodwood SpeedWeek has been created as an imaginative online response to the coronavirus pandemic which forced the cancellation of both the Goodwood Festival of Speed and the Goodwood Revival.

The car shows will instead go on behind closed doors and without spectators or guests, but be broadcast to millions around the world, via the internet, social media channels and television, with interactive features which allow fans to participate. 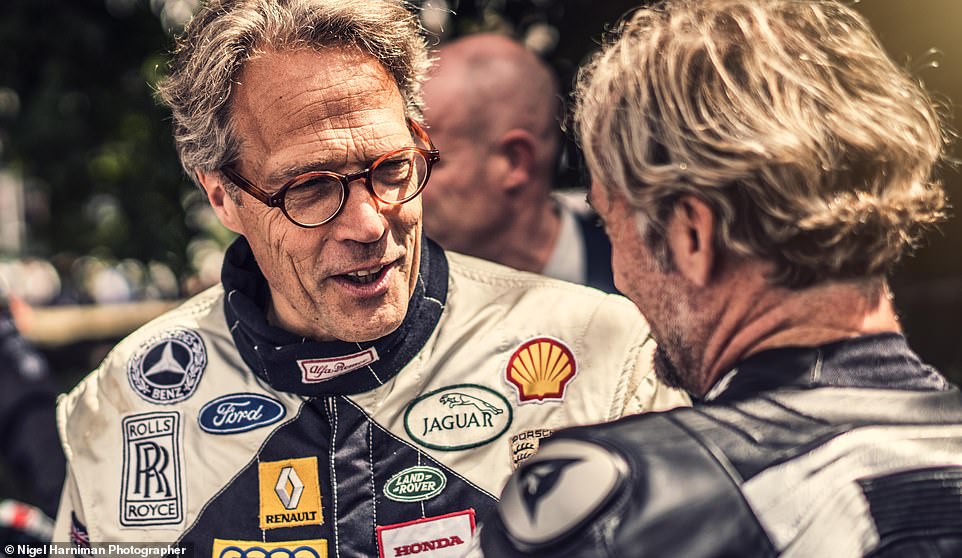 Goodwood SpeedWeek will be live streamed from the Goodwood Motor Circuit, which sits on the Duke of Richmond’s estate near Chichester, in West Sussex. Pictured, the Duke at the Goodwood Festival of Speed in 2016

Hosted at the Goodwood Racing Circuit and sponsored by Mastercard, organisers say the extravaganza will be ‘the most interactive, exciting, adrenaline-fuelled motoring event anywhere in the world’.

It aims to use the latest technology to bring together ‘the best elements of the Festival of Speed and Revival.’

Visitors who would normally pay handsomely for a ticket to attend either event in person, will this year be able to register for free for the SpeedWeek on a specially created online Hub at www.goodwood.com giving them access to all the action over three days.

HOW TO WATCH THE GOODWOOD ACTION

Sign up for streaming, social media links and timetable of events via the Goodwood hub at: www.goodwood.com

Viewers and fans can sign up for alerts at: https://www.goodwood.com/motorsport/goodwood-speedweek/

Goodwood SpeedWeek will be broadcast live on ITV1 and ITV4 during the event:

Highlight programmes to be broadcast on ITV4 the week after the event:

That includes racing, driving and drifting demonstrations, car launches, interviews and technology workshops, as well as virtual paddock tours, chatrooms, interactive competitions, polls, and quizzes designed to get people involved from the comfort of their sofas.

Most – but not all – of the events will also be viewable via social media channels:

Rock star and Dire Straits front-man Mark Knopfler is to play a touching live musical tribute to his late friend, racing legend Sir Stirling Moss, on Saturday afternoon in the presence of Lady Moss and the Duke of Richmond. Knopfler played a rendition of Local Hero at an 80th birthday celebration for Moss, and in 2009 was driven by him around the Goodwood circuit in a classic Aston Martin DBR1 race car of the type he excelled in during the late 1950s. For the first time the Stirling Moss Memorial Trophy will be contested at Goodwood in honour of the driver dubbed Mr Goodwood because of his prowess there.

TV designer Kevin McCloud is judging a competition encouraging adults and children to create their own three-dimensional celebrations of the motor car – taking inspiration from the giant central sculptures created each year to celebrate the Festival of Speed.

Model and actress Twiggy is judging the Revival Best Dressed competition encouraging fashion fans to dress to impress in costumes from the original glory days of Goodwood in the 40s, 50s, and 60s.

Children aged up to 12 can enter a design a MINI contest, with the winning design wrapped on a full-sized MINI to race at next year’s Revival.

Supercars from McLaren, Aston Martin, Ferrari, Lamborghini, and Koenigsegg will take a bow.

The absence of spectators has allowed two never to be repeated events to take place: the Goodwood Driftkhana with high speed drifting from a range of cars – including the new all-electric Ford Mustang Mach-E 1400 – sliding sideways, and the Rally Super Special with a host of WRC world rally cars. 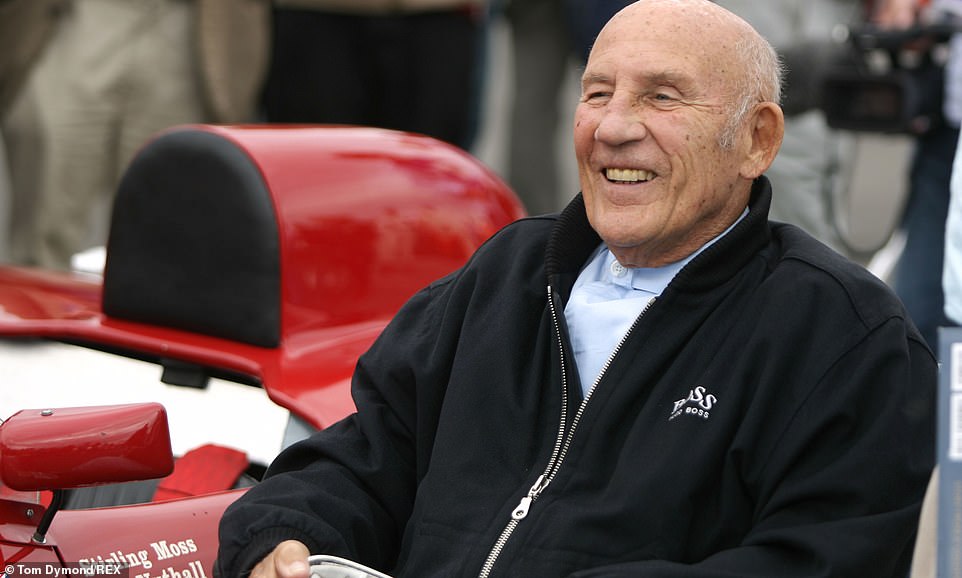 Rock star and Dire Straits front-man Mark Knopfler is to play a touching live musical tribute to his late friend, racing legend Sir Stirling Moss (pictured above in 2010), on Saturday afternoon in the presence of Lady Moss and the Duke of Richmond 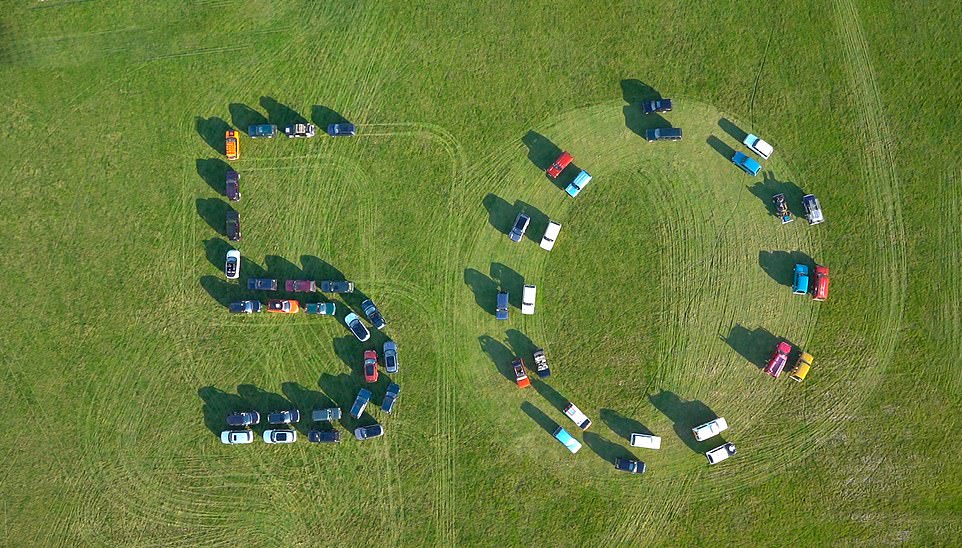 The Goodwood Shootout pits a variety of the greatest cars and drivers from various motorsport racing disciplines against each other – including F1, Le Mans, NASCAR, V8 Supercars and BTCC British Touring Car Championships. The finale will be broadcast live on ITV at 3pm Sunday.

However, Volkswagen has cancelled the planned appearance of its electric ID.R race car and ID.3 hatchback ‘so as not to compromise the health of its employees’ – including 30 from its Motorsport division, because of the pandemic.

Some 12 miles of high-speed fibre cabling, 49 high-definition cameras, a 180-strong television crew, two TV studios and 10 presenters are being used to stream the live action.

The Duke of Richmond told This is Money that the Goodwood team had made ‘a remarkable effort’ to bring the spirit of the Festival of Speed and the Revival into the digital age in the face of the pandemic. ‘What a time! But it’s been an amazing turnaround.’

He added: ‘We were presented with a unique opportunity to go one step further, placing digital right at the heart of the Goodwood experience. It’s enabled us to raise the bar even higher, offering a once in a lifetime, interactive experience that is accessible to viewers anywhere in the world.’

Full timetable, details, and access to the live streamed broadcasts are at www.goodwood.com

A cavalcade of 50 Range Rovers has driven the Goodwood Motor Circuit to celebrate five decades of the luxury 4×4 in its fiftieth anniversary year.

The procession included an eclectic mix of models from across the UK including Range Rover fire engines, expedition vehicles, ambulances, and record breakers.

It was led by two cars spanning the five decades of the 4X4’s history: a drivable chassis used to demonstrate the original Range Rover 4×4 system in the 1970s and a commemorative new Range Rover Fifty limited edition model – number 1 of 1970 built to mark the year of its birth. 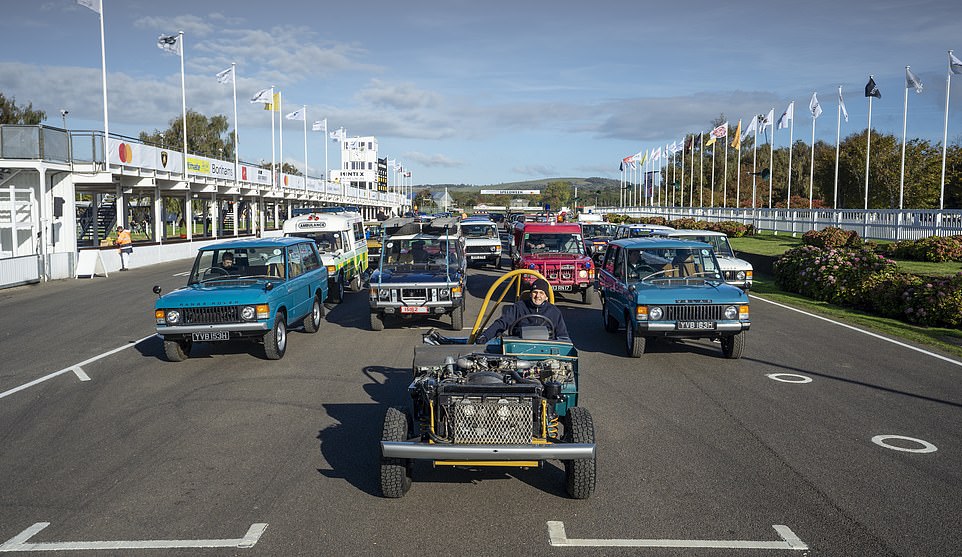 The procession of 50 Land Rovers included an eclectic mix of models from across the UK including Range Rover fire engines, expedition vehicles, ambulances, and record breakers

The same 50 Range Rovers later created a dramatic 50 outline captured from the air by a drone to commemorate the last half century.

The leading 1969 drivable chassis, was originally developed to allow engineers to monitor suspension and powertrain over rough terrain.

Land Rover said: ‘All four generations of Range Rover featured in the convoy and included the Beaver Bullet, which broke 27 speed records in 1985, a Trans-American Expedition example which crossed the all-but-impassable Darien Gap in 1971 and a 2004 example used by Greater Manchester police.’

All 50 vehicles and drivers had to undergo training during the day to precisely navigate and position each vehicle to achieve the one-off visual.

Jaguar Land Rover UK managing director Rawdon Glover said ‘As we celebrate Range Rover’s 50th Anniversary throughout 2020, it has been a pleasure today to remind ourselves not only of some of the extraordinary forms that the Range Rover has taken over the years, but also the people and stories behind them.’

The limited edition Range Rover Fifty is for sale priced from £111,195.