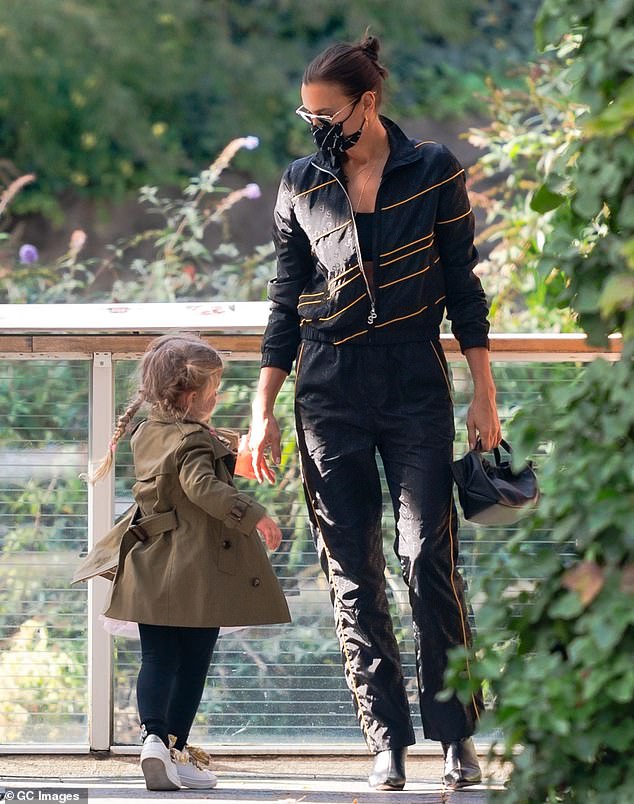 Irina Shayk keeps it casual in a black tracksuit as she and daughter Lea, 2, enjoy a fun day at the Central Park Zoo

Irina Shayk is taking a walk on the wild side.

On Thursday, the Russian supermodel brought her two-year-old daughter, Lea, to the Central Park Zoo where they looked at some of the city’s exotic animals.

The 34-year-old stunner looked effortless in a black tracksuit, as she enjoyed the fun outing with her daughter.

Zoo day: Irina Shayk, 34, treated daughter Lea, two, to a fun day at the Central Park Zoo. The supermodel rocked a black tracksuit and a pair of motorcycle boots as she and Lea took in the city’s wildlife

Always a doting mom, Irina tended to Lea, who she shares with ex-partner Bradley Cooper, 45, as she peered at the wildlife.

The in-demand model looked every bit the showstopper, as she rocked the matching athleisure look with a pair of black motorcycle boots.

Sticking with an all black ensemble, she carried a square leather purse and a patterned black face mask.

She flashed a hint of her enviable figure in the slightly unzipped jacket, that revealed a black sports bra. 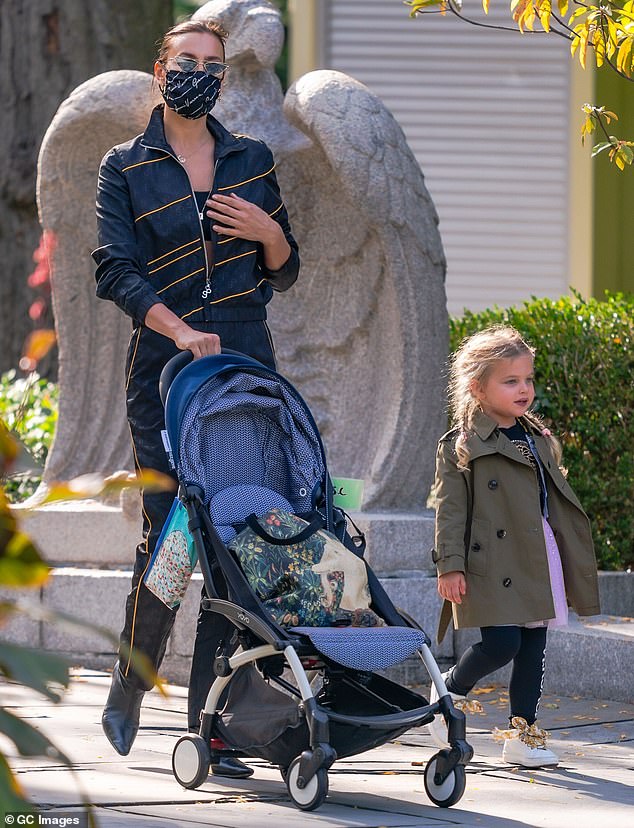 Strolling: The Russian stunner tended to Lea’s needs as they peered at some of the animals. The two-year-old sat in her stroller, before getting a closer look at the wildlife with her mom 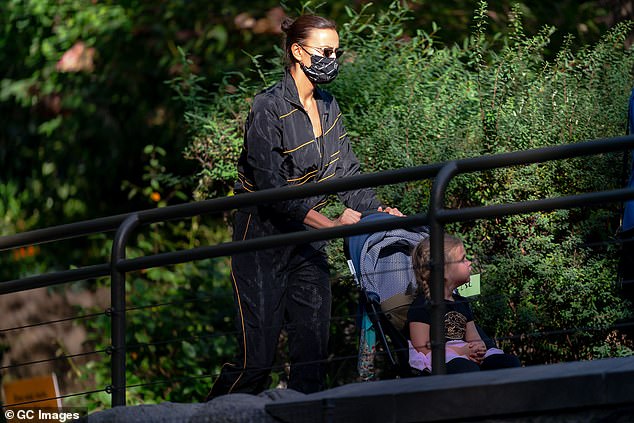 Out and about: The two-year-old sat in her stroller, before getting a closer look at the wildlife with Irina close by

Irina kept herself protected with a black face mask, capping off her look with a pair of cat-eye sunglasses.

She walked beside her little girl while pushing a stroller, as the tot seemed enchanted by the display of creatures.

Every bit the style star in her own right, Lea rocked black leggings and a brown trenchcoat.

She layered the pieces with a pink tutu and a black t-shirt, as she kept her golden locks in braids. 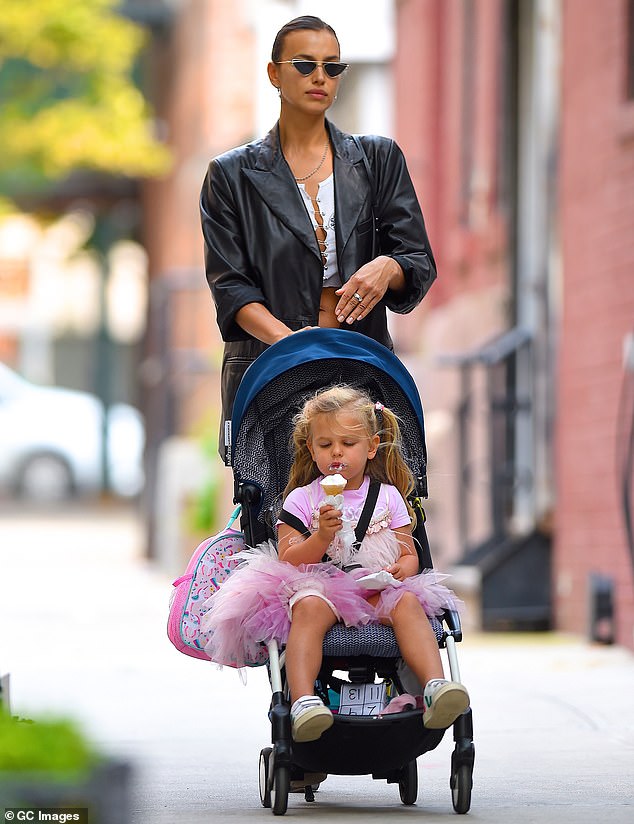 Ice cream run: Irina co-parents Lea with ex-partner Cooper, as the two have been spotted hanging amicably in NYC; pictured in September

In recent months, Irina has been spotted with her daughter all over NYC, as life slowly returns to normal amid the pandemic.

The international supermodel, who has recently modeled for Zac Posen, Zimmerman, Burberry and Jean Paul Gaultier, has been balancing her busy schedule while still being a hands-on mother.

She co-parents with Cooper, while also enlisting help from her new boyfriend art dealer Vito Schnabel, 34, who has been seen dropping Lea off at school.

As the industry starts to re-open safely, designers and models alike are learning to work with the new normal. 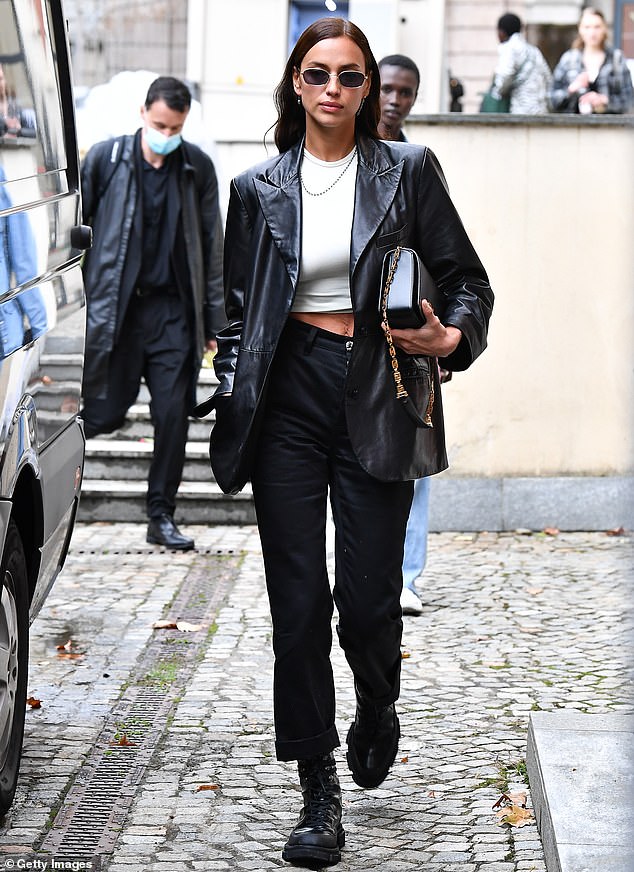 Boss: Shayk was spotted outside the Hugo Boss fashion show in Milan where she modeled; pictured September 25