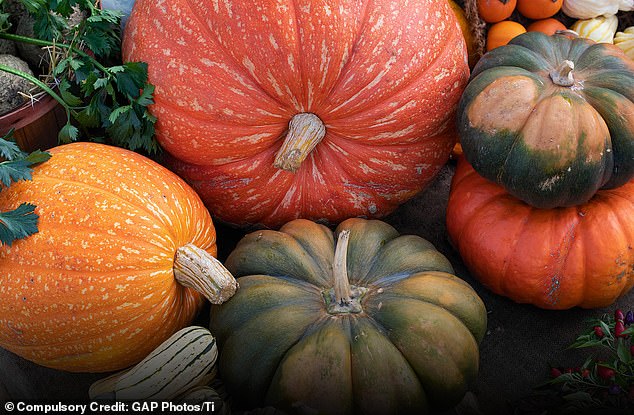 Plump for pumpkins! Whether roasted, mashed or made into soup, pumpkins are a princely veg, says Monty Don. All they need is sun and space to spread…

By Monty Don For Weekend Magazine

Monty revisits one of his classic books in an occasional series Gardening at Longmeadow with Monty Don.

Pumpkins, the final hurrah of summer, are at their best right now. They’re big, bright and, in my opinion, delicious as soup, roasted or mashed.

All pumpkins are squash but not all squash are pumpkins. Pumpkins have hard skins or rinds that mean they can be stored for months if dried in the sun, but many squash have thinner skins and some, like the summer squash such as courgettes, never develop a skin thick enough to store.

I sow my pumpkins in the greenhouse in the middle of April and plant them out in June, which is quite early enough.

How to make leaf mould

Unlike compost, which has to be made up of a good mixture of ingredients to get the right balance, leaf mould is the easiest thing in the world to make.

■ Gather deciduous leaves, make sure that they are wet, put them to one side and let them quietly get on with the process of decomposition. 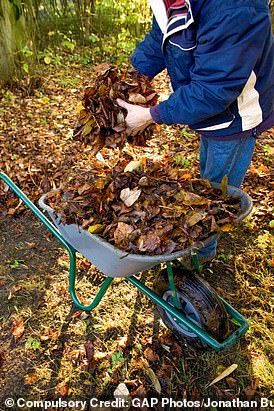 ■ You can just leave your leaves to lie where they fall and they will convert to leaf mould. But do be aware that they can smother many plants and will also look untidy.

■ My own technique is to use a combination of brush, rake and mower. If the ground is dry enough, mowing leaves is a good idea because it chops them as it collects them so they will rot down faster. 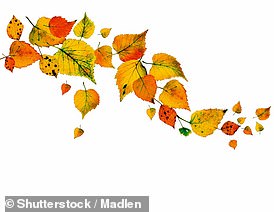 Leaving leaves where they fall, open to the element turns them into mould

I put them in pits that have been half-filled with good garden compost so that the excess soil forms a crater around each plant that will hold water and funnel it down to the roots. They then grow steadily before setting flowers that develop into fruits.

Mind you, when you plant them out 2 metres or even 3 metres apart, it seems inconceivable that they will grow and fill the allotted space.

The secret is to grow a catch-crop between them, like lettuces or radish, which can be harvested before they disappear beneath a bristly sea of pumpkin leaves, or sweetcorn and climbing beans, which will rise above the leafy mulch.

The matter of their greedy spread is a tricky one. Pumpkins take over a large area and in a small garden or one filled with other vegetables this can be a real limitation.

However, I have experimented with growing them vertically rather than letting them sprawl. I used tripods made from really stout stakes (coppiced chestnut ordered for the sweet peas but rejected on account of being too thick) that I fixed very firmly into the ground.

They have proved effective and I would recommend it as a good way of getting a lot of plant into a little space – but make sure they are secure because even the smallest pumpkin is heavy.

In fact we often support the growing fruit with a net that is something between a hammock and a brassiere, lest its weight breaks the stem it hangs from.

Temperatures below about 12˚C stop them in their tracks and that is when slugs and snails tuck in, eating the stems where they touch the ground and sometimes gnawing right through them. But once they get growing, the plants are robust enough to ignore such nibbling.

By the end of summer the weather is critical. Early frosts will reduce the foliage to blackened rags and cold, wet weather will risk the fruit rotting where they sit on wet ground.

If it is very wet, place the fruit on a tile or some straw to raise them off damp soil. Ideally they will have as much sun as possible to ripen.

The more sun they get, the harder your pumpkins will be and the better they will store.

They should be harvested by carefully cutting the stem so that 5cm remains. This will stop any neck rot.

If the rinds are at all shiny it is an indication that they could do with some more sun, so dry them outside on a table or, ideally, a drying rack made from chicken wire and posts so the air can circulate.

Although they might feel indestructible, treat them gently. Try not to drop or pile yours up as they will keep better undamaged.

Quinces will thrive in damp places that invite trouble for apples and pears.

I have four trees in the Damp Garden. ‘Leskovac’ is round, prolific and looks like a regal cross between an apricot and an apple. ‘Vranja’ [pictured] is tall, big-leaved and slow to bear fruit (although when it does they are enormous and pear-shaped).

‘Lusitanica’ also has pear-shaped fruit, but is smaller. ‘Champion’ is hard, yellow and apple-shaped. 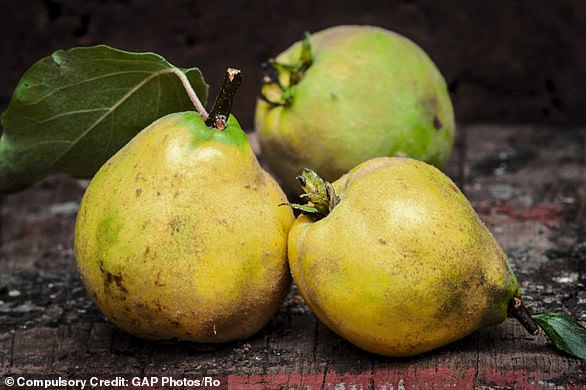 I pick our quinces at the end of October, as late as the latest apples. Pick them before they fall and bruise and, like apples or pears, when they come away easily in your hand.

Quinces can suffer from blight, making their fluff-scuffed skins blotched like brown ink on blotting paper.

The affected parts should be cut out and the rest cooked perfectly satisfactorily – quinces cannot be eaten raw. We make quince cheese, quince jelly and add stewed quince to stewed apple.

Quinces are self-fertile – so you can have just one and expect it to fruit. I prune out branches that are rubbing or trailing down to the ground, but on the whole I let them be and simply admire and celebrate them at every stage, from tree to fruit.