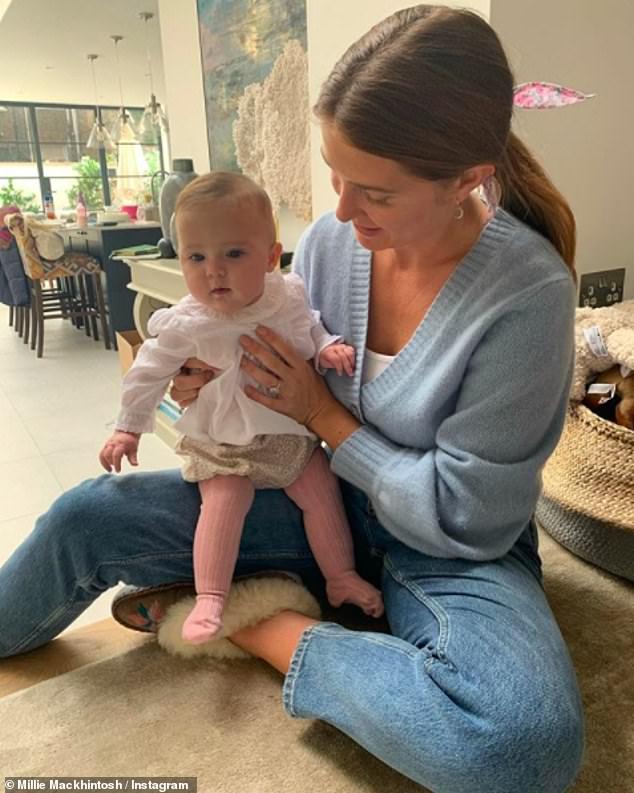 ‘I’d go from being euphorically happy to being deeply sad and tearful:’ Millie Mackintosh reveals she ‘spiralled into anxiety’ and feared developing post-natal depression after Sienna’s birth

Millie Mackintosh has revealed she ‘spiralled into anxiety’ and feared developing post-natal depression after the birth of her first child Sienna with husband Hugo Taylor.

Taking to Instagram on Saturday the former Made In Chelsea star, 31, shared a sweet picture with her little one as she explained the struggles she faced in the first six weeks of being a mum.

The reality star revealed she would ‘go from being euphorically happy, to being deeply sad and tearful’ and encouraged other mums to get help for the ‘baby blues’.

Honest: Millie Mackintosh has revealed she ‘spiralled into anxiety’ and feared developing post-natal depression after the birth of her first child Sienna

In the emotional post she penned: ‘Let’s talk about the Baby Blues! Like most new mum’s when I first arrived home with Sienna, I was totally overwhelmed by the love I felt for her, but I also felt very confused by the conflict in my emotions.

‘I’d go from being euphorically happy, to being deeply sad and tearful in the same moment. Hugo would ask what was wrong and I was unable to give him an answer which only made me feel worse as I couldn’t explain these all-consuming emotions.

‘There was the irony of feeling so incredible lucky and happy, surrounded by cake, flowers, cards celebrating our adorable new arrival, yet feeling so stormy inside, which spiralled into anxiety as I feared developing post-natal depression (which did not happen), it almost started to take over the most precious time in my life.’ 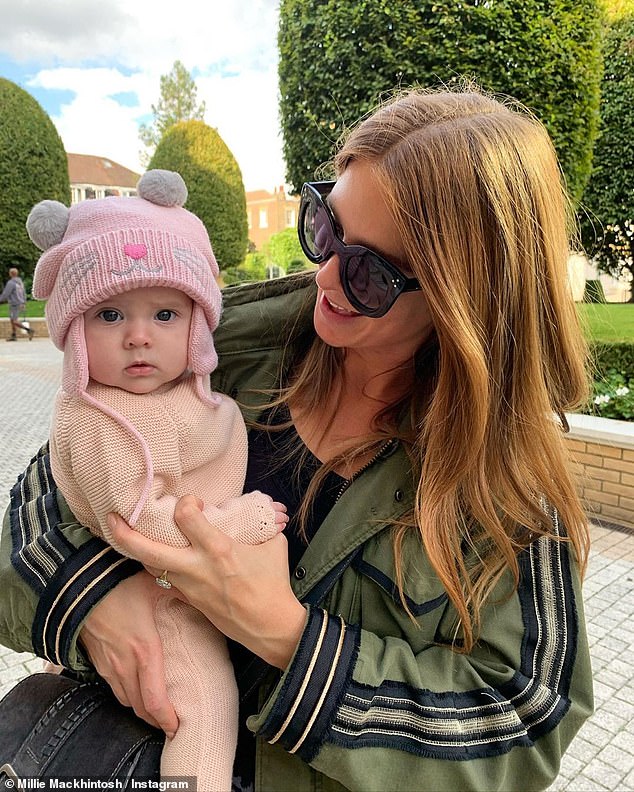 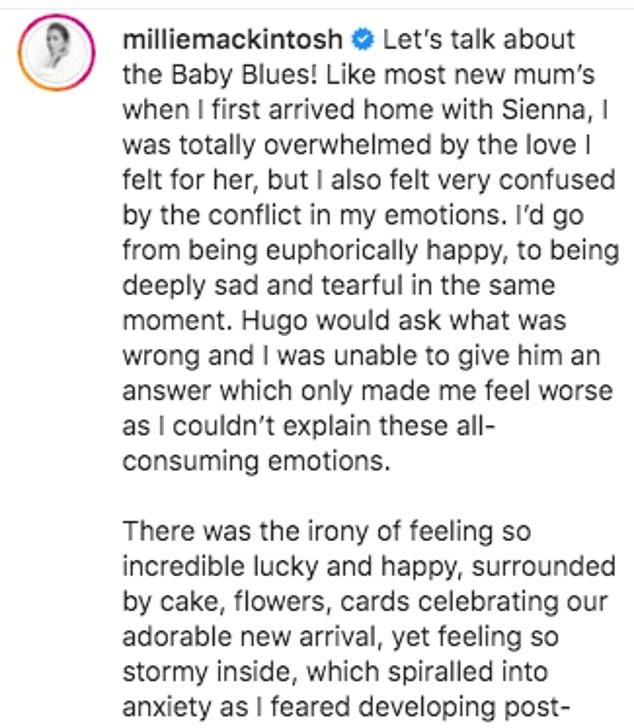 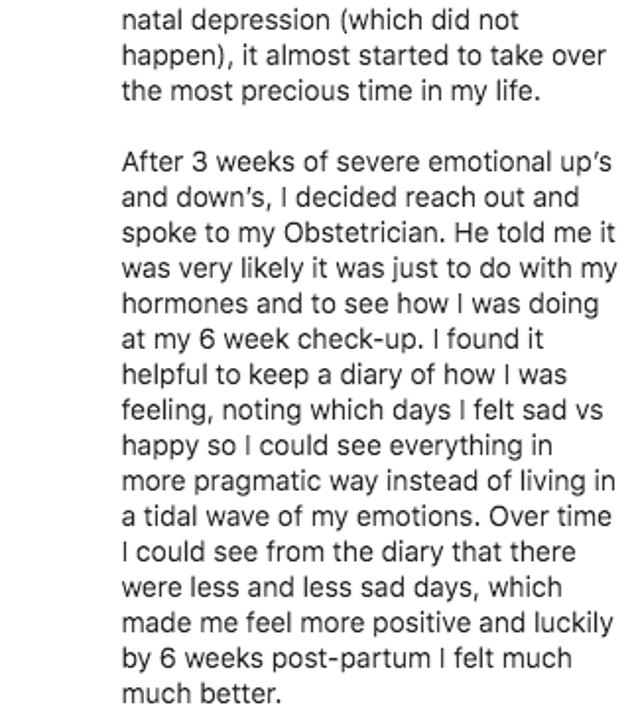 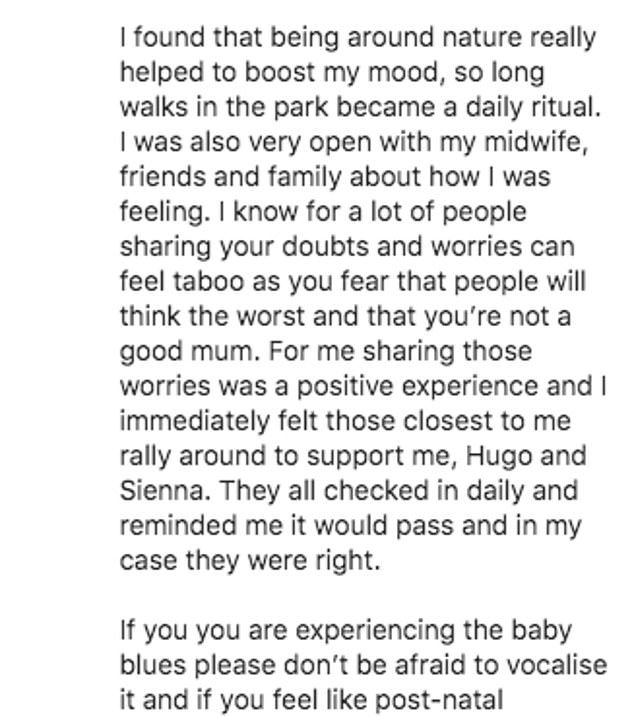 Open: Taking to Instagram on Saturday the former Made In Chelsea star, 31, shared a sweet picture with her little one as she explained the struggles she faced in the first six weeks of being a mum

Explaining how she reached out for help she continued: ‘After 3 weeks of severe emotional up’s and down’s, I decided reach out and spoke to my Obstetrician. He told me it was very likely it was just to do with my hormones and to see how I was doing at my 6 week check-up.

‘I found it helpful to keep a diary of how I was feeling, noting which days I felt sad vs happy so I could see everything in more pragmatic way instead of living in a tidal wave of my emotions.

‘Over time I could see from the diary that there were less and less sad days, which made me feel more positive and luckily by 6 weeks post-partum I felt much much better.’ 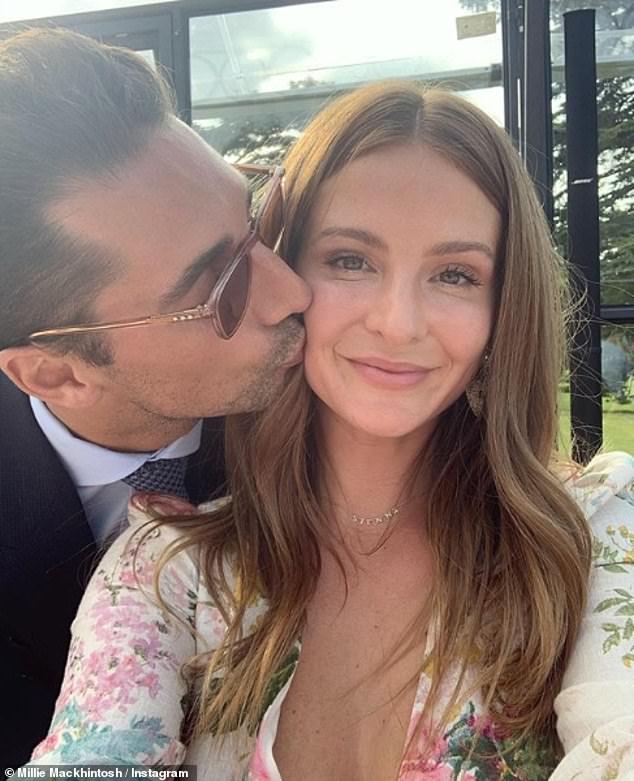 Millie went on to reveal how fresh air and being outside helped her: ‘I found that being around nature really helped to boost my mood, so long walks in the park became a daily ritual.

‘I was also very open with my midwife, friends and family about how I was feeling. I know for a lot of people sharing your doubts and worries can feel taboo as you fear that people will think the worst and that you’re not a good mum.

‘For me sharing those worries was a positive experience and I immediately felt those closest to me rally around to support me, Hugo and Sienna. They all checked in daily and reminded me it would pass and in my case they were right.’ 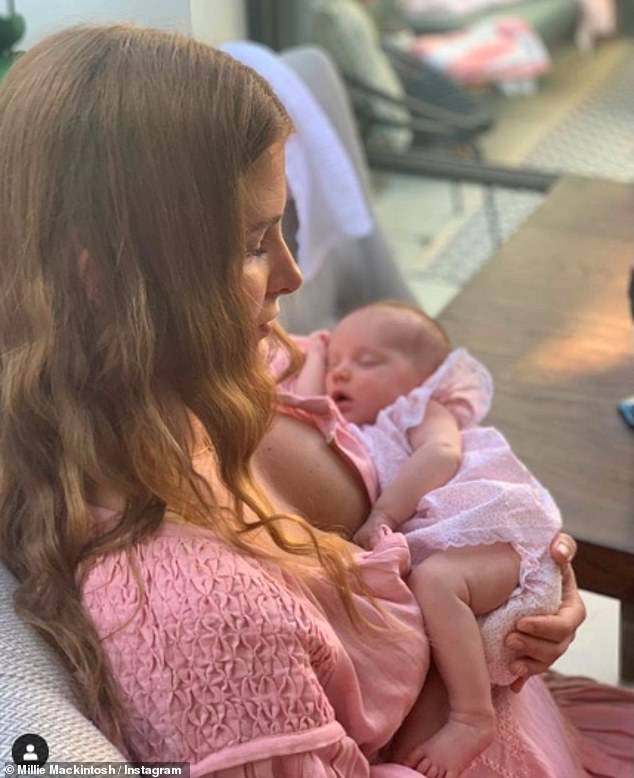 Little one: Millie gave birth to Sienna in May during the coronavirus pandemic and national lockdown, something which she said was ‘daunting’

She signed off by saying: ‘If you you are experiencing the baby blues please don’t be afraid to vocalise it and if you feel like post-natal depression could be setting in then seek professional help as soon as you have those thoughts and feelings. Remember you are never alone!’

Millie gave birth to Sienna in May during the coronavirus pandemic and national lockdown, something which she said was ‘daunting’.

However although hating the idea of not being able to have her husband with her during the delivery, Millie said that her main concern was Sienna’s wellbeing.

She added that her ‘primal instincts’ kicked in and that Hugo did get to be with her for a few hours at the hospital after their daughter was born.

For confidential support call the Samaritans on 116123 or visit a local Samaritans branch, see www.samaritans.org for details. 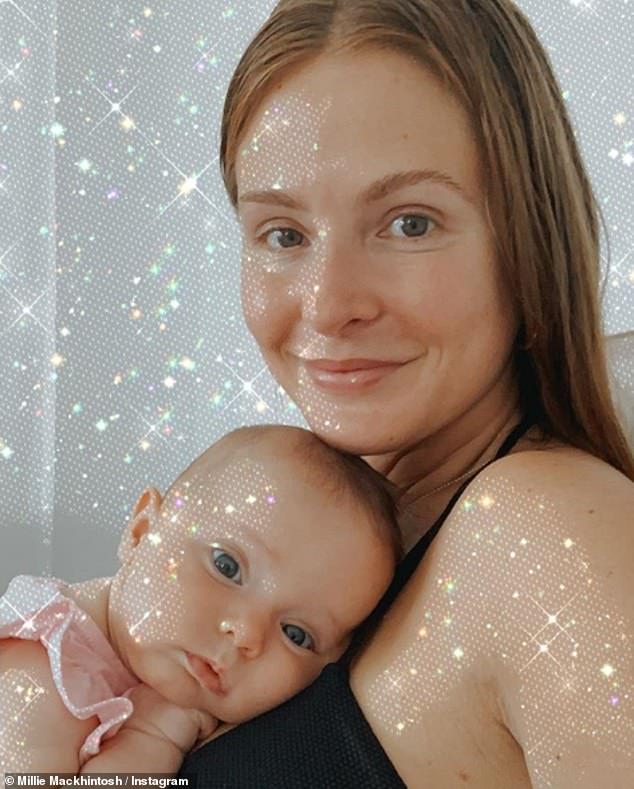 New mum: Millie regularly shares updates on Sienna on her social media for her followers

WHAT IS POSTNATAL DEPRESSION?

Postnatal depression is a form of the mental-health condition that affects more than one in 10 women in the UK and US within a year of giving birth.

As many men can be affected as women, research suggests.

Many parents feel down, teary and anxious within the first two weeks of having a child, which is often called the ‘baby blues’.

But if symptoms start later or last longer, they may be suffering from postnatal depression.

Postnatal depression is just as serious as others form of the mental-health disorder.

Sufferers should not wait for their symptoms to just go away.

Instead they should recognise that it is not their fault they are depressed and it does not make them a bad parent.

If you or your partner may be suffering, talk to your GP or health visitor.

Treatments can include self-help, such as talking to loved ones, resting when you can and making time to do things you enjoy. Therapy may also be prescribed.

In severe cases where other options have not helped, antidepressants may be recommended. Doctors will prescribe ones that are safe to take while breastfeeding.

Postnatal depression’s cause is unclear, however, it is more common in those with a history of mental-health problems.

Lack of support from loved ones, a poor relationship with the partner and a life-changing event, such as bereavement, can also raise the risk.