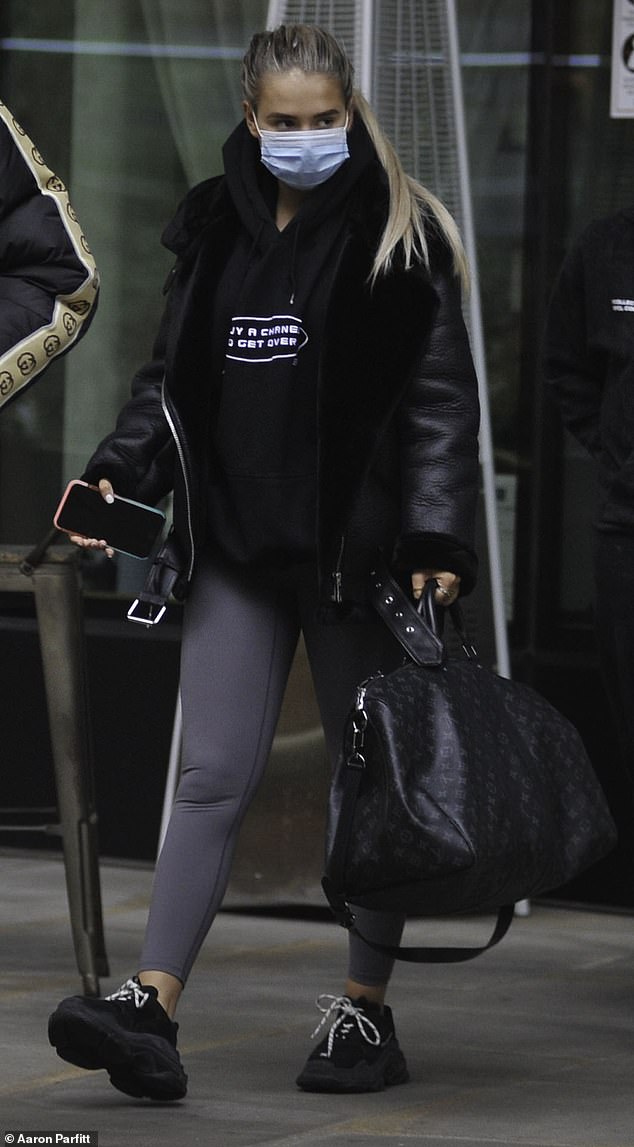 She is awaiting further surgery after having a potentially cancerous mole removed from her leg last month.

And Molly-Mae Hague appeared to be keeping her spirits up as she stepped out for the first time since her shock diagnosis with boyfriend Tommy Fury, 21.

The Love Island star, 21, cut a casual figure in a black ensemble and was joined by her close friend Maura Higgins, 29, for lunch at FoodWell in Manchester on Saturday.

Chic: Molly-Mae Hague, 21, appeared to be keeping her spirits up as she stepped out with boyfriend Tommy Fury, 21, and close friend Maura Higgins, 29, on Saturday

A fresh-faced Molly-Mae paired slate grey leggings with an oversized biker jacket which she layered over a black hoodie.

The blonde beauty scraped her platinum locks up into a sleek high ponytail and wore comfortable trainers for the outing.

She put safety first with a blue face mask and carried her everyday essentials in a black Louis Vuitton travel bag. 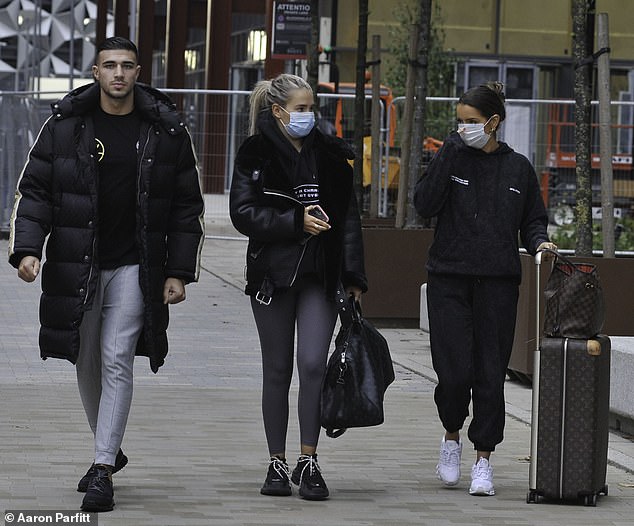 Close: A fresh-faced Molly-Mae paired slate grey leggings with an oversized biker jacket which she layered over a black hoodie (pictured with Tommy Fury and Maura Higgins)

Meanwhile Tommy dressed for autumn in a long padded coat paired with grey tracksuit bottoms while his dark hair was slicked back.

Maura opted for a charcoal grey tracksuit with she styled with white trainers for the outing and a blue face mask.

She wore her brunette tresses in a chic up-do and walked with a Louis Vuitton suitcase and matching tote bag. 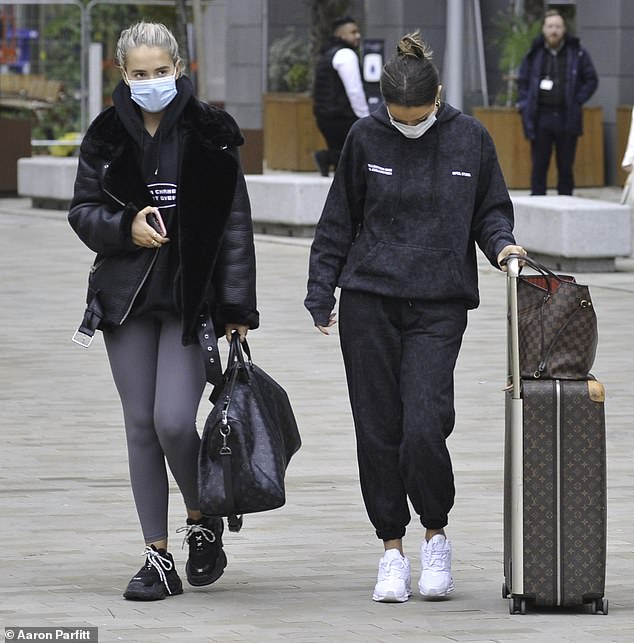 Pals: Maura opted for a charcoal grey tracksuit with she styled with white trainers for the outing and a blue face mask

It comes after Molly-Mae shared a worrying post to her Instagram Stories on Thursday afternoon, and while she couldn’t reveal exactly what doctors had found just yet, she said she has to undergo further surgery.

She wrote: ‘So about three weeks ago now I was advised that a mole I had on my leg needed removing. I had the procedure done within a few days.

‘Last week I received my results back and it’s safe to say they were not at all what I was expecting. 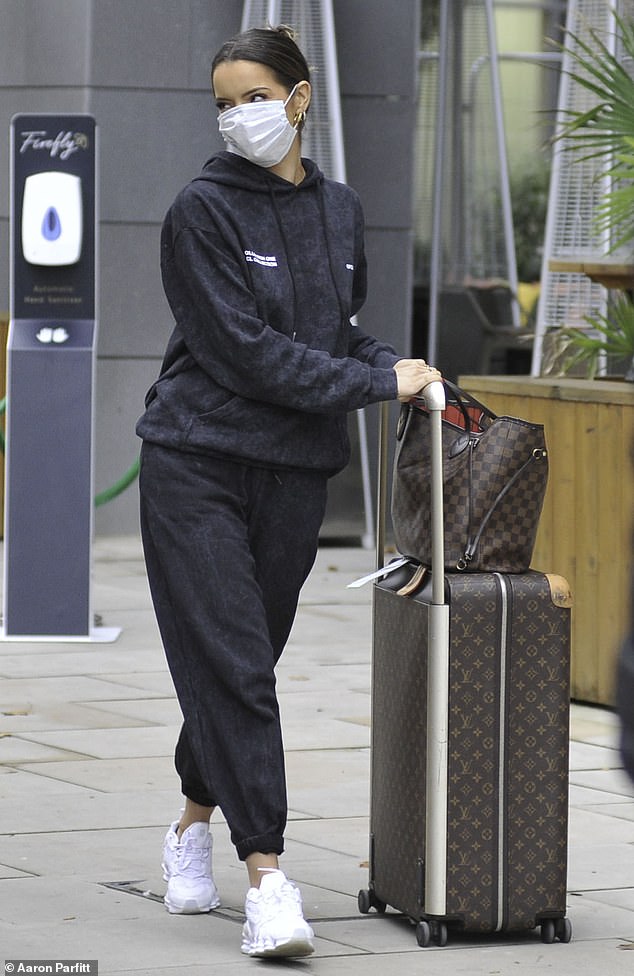 Sweet: Maura wore her brunette tresses in a chic up-do and walked with a Louis Vuitton suitcase and matching tote bag

‘I’ve been trying to process the information I received whilst being super busy with work and it’s not been easy.

‘I’m still not able to give my full diagnosis until my further surgery has taken place and I’ve received those results but for now I’m just trying to stay positive.’

She continued: ‘I never thought at 21 something like this would happen to me and it’s very scary but all I know is that I absolutely need to share my story and what I’m going through to raise awareness of my situation.

‘I’ll keep you all updated as much as I can, I’ve already received so many lovely messages from you guys and I appreciate it so much.

‘Your health must come first and I know this is something that some of my followers may have already gone through…. I’d love to hear from you guys.’

Last month, Molly-Mae shared a snap of her bandaged scar, explaining she decided to have it removed after getting multiple doctors’ opinions about whether it could become cancerous. 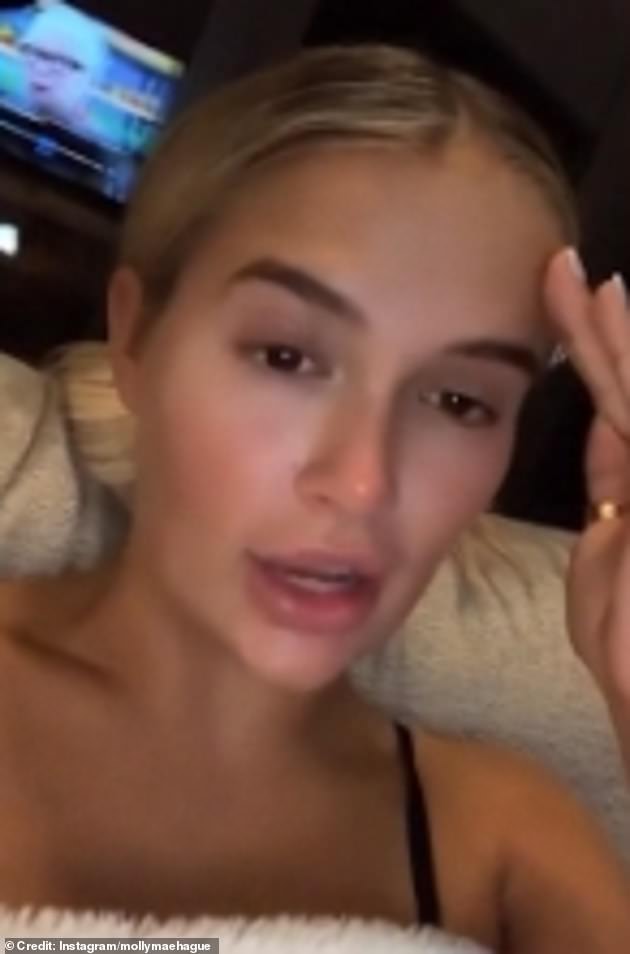 ‘I never thought this would happen to me aged 21’: Molly-Mae revealed her shock diagnosis after having a mole removed from her leg as she said she now has to have further surgery

She tearfully recalled her cancer scare after visiting a doctor three times to have her mole examined but reassured fans at the time it turned out to be non-cancerous.

Molly-Mae shared a snap of the bandage on her leg, writing: ‘So this is what I’ve been up to today…

‘Some of you may remember me talking about the mole that was here a few weeks ago on my story.

Worrying: Molly-Mae shared this update on social media on Thursday afternoon, telling her fans that her results were ‘not what I was expecting’

‘Not going to go into too much detail until I have my results back next week but this just goes to show how important getting different doctors’ opinions is.

‘So relieved to have it gone, I’ll keep you all updated. I just need to share this because I can’t stress the important of this situation enough.’

In the post Molly-Mae also included a snap of the original mole on her leg to show the true extent of the procedure. 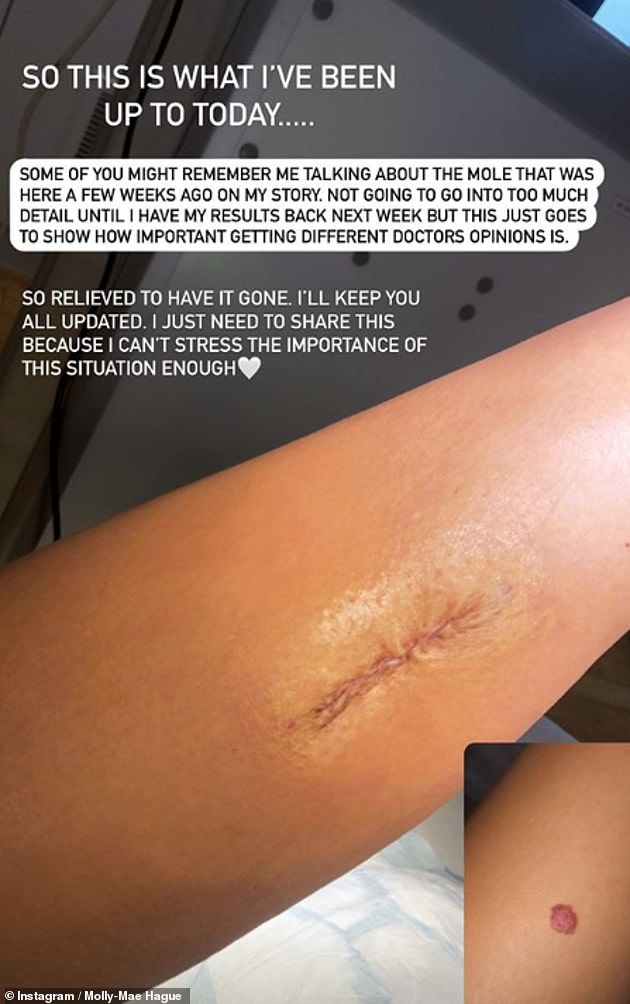 Scary: The Love Island star previously took to Instagram Stories to share a snap of her scar following the procedure, after getting several different doctors’ opinions about the mole

Three weeks earlier the star tearfully told fans about her recent cancer scare after noticing the mole on her calf.

Molly-Mae added that it was her mum Debbie who first noticed the mole while she was in the Love Island villa, before pleading with her fans to get any unusual marks checked out.

In a series of videos she posted to Instagram Stories, Molly-Mae admitted she’d been moved to tears after watching a Stand Up To Cancer segment about Emily Hayward.

Emily died in June 2018 after being diagnosed with skin cancer seven years earlier when she was just 17, and documented her battle with the disease on a YouTube channel.

Molly-Mae then told her followers she’d found a similar mole on her calf when she was in the Love Island villa last year. 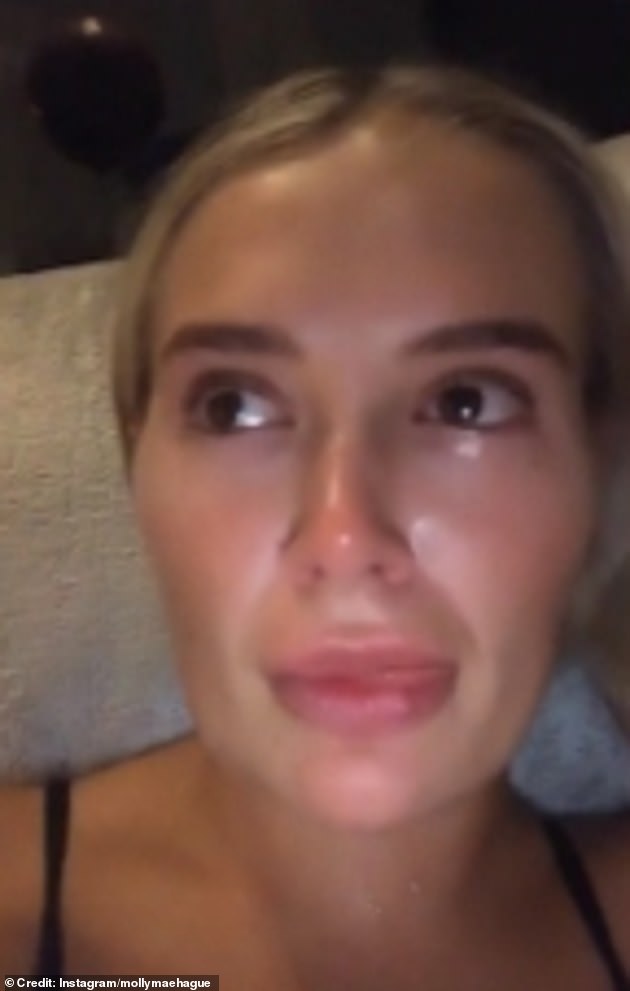 Scary: Molly had fans about her recent cancer scare after noticing the mole on her calf but believed that the mole had turned out to not be cancerous

She explained: ‘And I actually found a mole on the back of my calf about a year or so ago and had it checked, obviously I’m so blessed that mine wasn’t cancerous, but it just made me so upset that like ”what does she do to deserve that? Who deserves that?”

‘It is just the worst thing in the world. It’s just to comprehend for families that have to go through it, how much of a struggle it must be for people who actually deal with cancer. It just broke my heart watching that.’

Molly-Mae went onto urge her followers to get any unusual moles checked out, and shared a snap of the one she’d noticed on her calf.

She said: ‘Get your moles checked out people!!! It is so unbelievably important. I’ve had this checked three times now by different consultants just to be sure.

MELANOMA IS THE MOST DANGEROUS FORM OF SKIN CANCER

Melanoma is the most dangerous form of skin cancer. It happens after the DNA in skin cells is damaged (typically due to harmful UV rays) and then not repaired so it triggers mutations that can form malignant tumors.

Around 15,900 new cases occur every year in the UK, with 2,285 Britons dying from the disease in 2016, according to Cancer Research UK statistics.

The patient can decide to use a skin graft if the surgery has left behind discoloration or an indent.

This is needed if the cancer reaches stage III or IV. That means that the cancerous cells have spread to the lymph nodes or other organs in the body.