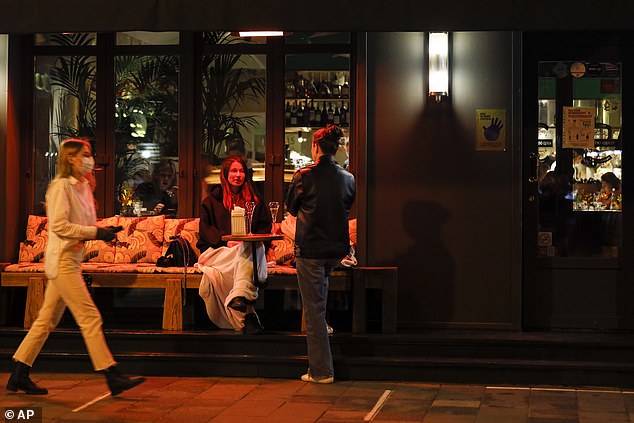 Moscow’s bars and restaurants continue to be packed with carefree customers who ignore social distancing and shun face masks despite the resurgence of coronavirus infections sweeping Russia.

The outbreak in Russia this month is breaking the records set in the spring, when a lockdown to slow the spread of the virus was put in place.

But, as governments across Europe move to reimpose restrictions to counter rising cases, authorities in Russia are resisting shutting down businesses again.

Some regions have closed nightclubs or limited the hours of bars and restaurants, but few measures have been implemented in Moscow, which is once again the epicenter of the surge.

Similar to the first wave doctors and experts are sounding the alarm that Russia’s health system is being stretched. Pictured: Patriarshiye Prudy restaurant in Moscow

On Friday, Russian authorities reported over 15,000 new infections, the highest daily spike so far in the pandemic.

Moscow — with less than 10 per cent of the population — accounts for up to 30 per cent of new infections each day.

The health minister says 90 per cent of hospital beds for coronavirus patients have been filled. Three times this week, Russia’s daily death toll exceeded the spring record of 232.

Even these soaring virus tolls are likely undercounts; experts have cautioned that official figures around the world understate the true toll, but critics have taken particular issue with Russia’s death tolls, alleging authorities might be playing down the scale of the outbreak. 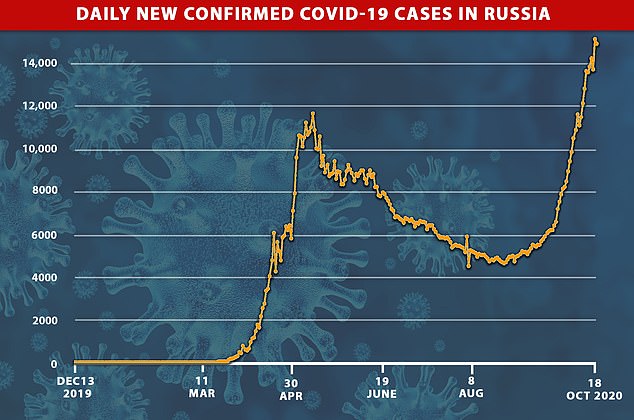 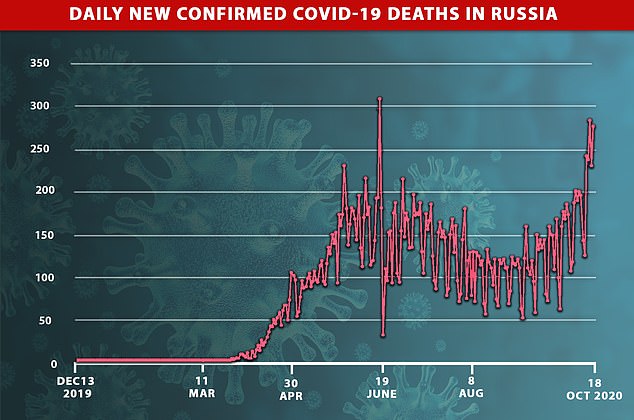 The spring lockdown hurt the country’s already weakened economy and compounded Russians’ frustration with plummeting incomes and worsening living conditions, driving Putin’s approval rating to a historic low of 59 per cent in April, according to the Levada Center, Russia’s top independent pollster. Analysts say his government doesn’t want to return to those darks days.

Judy Twigg, a professor of political science at Virginia Commonwealth University, specializing in global health said: ‘They know that people have just come to the end of their tolerance of the lockdown measures that would be hugely unpopular if they got imposed again.’

In fact, Putin’s government appears to be moving in the opposite direction. Russian officials announced this week that air traffic would resume with three more countries. All international air traffic was stopped in the spring.

The announcement reminded people ‘about the necessity to take care of their health as much as possible’ — a reflection of Russian authorities’ new effort to shift much of the responsibility for how the outbreak unfolds onto the people. 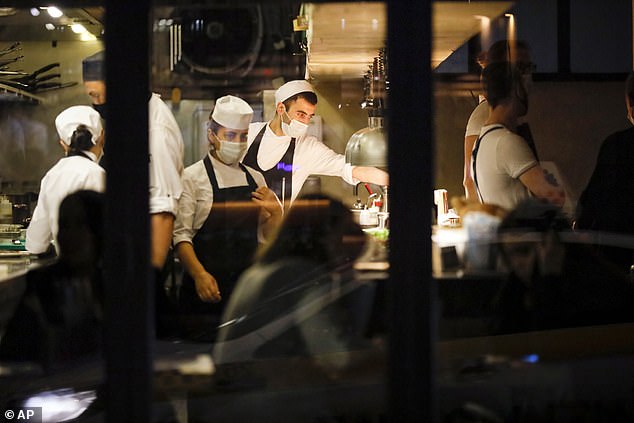 Moscow has taken the necessary measures, ‘but without the people responding to these measures, helping themselves and the people around them, nothing will work,’ warned Sergei Sobyanin, the mayor of the Russian capital of 12.7 million.

Despite the evidence of a resurgence the attitudes of some remain blasé.

At The Bix cocktail bar in Moscow, where only the staff were seen to be wearing face masks, customer Dr. Alexandra Yerofeyeva, an internal medicine specialist at an insurance company said: ‘I believe that everyone will have the disease eventually. Nothing ventured, nothing gained.’

During the summer, authorities lifted most virus-related restrictions, and life in Russia started getting back to normal. Perhaps too quickly, some critics said, noting that the government was eager to ensure that people voted on constitutional amendments extending Putin’s rule.

Even as health officials still report several thousand new infections every day, restaurants and cinemas reopened, vacationers flocked to Black Sea resorts, and 17,000 took part in the Moscow Half Marathon in August. Russia’s Sports Minister Oleg Matytsin said the race ‘marked this victory’ over the pandemic. 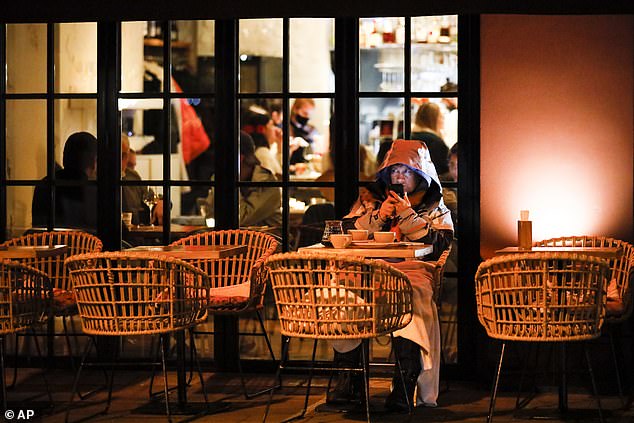 That same month, Putin announced regulatory approval of the first vaccine against coronavirus — although many scientists have cast doubt on the shot — and it is now being tested in a larger study. Authorities are offering it to doctors and teachers, but it’s not widely available.

With Putin’s approval ratings on the rise again, the government appears reluctant to do anything that might further weaken the economy and anger the public.

The authorities understand that ‘the economic virus is worse than the biological one,’ Boris Titov, Russia’s business ombudsman, told entrepreneurs this week.

Nearly 70 per cent of the country’s businesses ‘will not survive the second wave’ and the accompanying restrictions, he said. 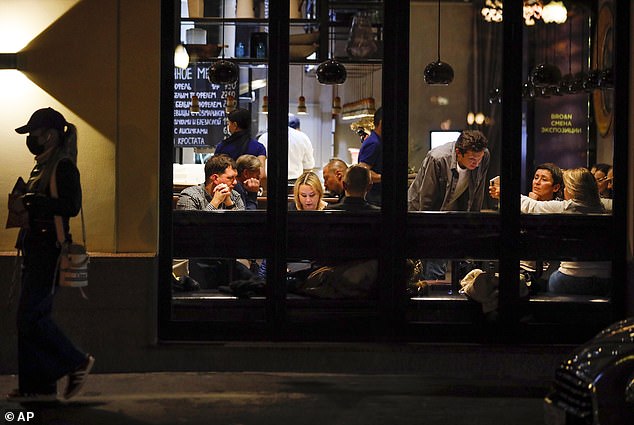 Customers sit in a restaurant at Patriarshiye Prudy, a hip restaurant and bar district in Moscow, Russia, late Friday, October 16

But doctors and experts are sounding the alarm that Russia’s health system is being stretched. Just like in the spring, media report hours long waits for ambulances and long lines for CT scans. People who have virus symptoms — who are supposed to call a visiting doctor service — report waiting days for anyone to arrive.

Vasily Vlassov, public health expert with the Higher School of Economics in Moscow said: ‘When it comes to the regions (beyond Moscow), we see that they are already choking.’

Moscow hospitals, so far, appear to be coping.

Dr. Alexander Vanyukov of the Moscow Hospital No. 52 said: ‘The hospital is full, but there are free beds for now, and we haven’t yet used all of the reserve beds.’

Life outside hospitals remains largely normal. Moscow officials have recommended the elderly and those with chronic illnesses stay home.

They ordered employers to make 30 per cent of their staff work from home, extended the fall school vacation by a week and moved middle and high school students to online classes.

As at the national level, officials have focused on personal responsibility, at one point sending inspectors to theatres to look for retirees who are not self-isolating.

Officials said they considered shutting bars and nightclubs, but on Thursday Moscow’s mayor proposed ‘an experiment’ instead: Employees and customers at establishments open between midnight and 6 a.m. must register for contact tracing purposes.

Margo Lankina, manager of popular Moscow cocktail bar, The Bix bar, admited that operating during the pandemic isn’t easy. Her staff must wear gloves and masks and their health is monitored. The venue is regularly cleaned.

Lankina added: ‘But on the other hand, it’s good that they allow us to work. Our guests? Well, the distance is not being observed, that’s true, what can I say?

‘But somehow we keep on living.’