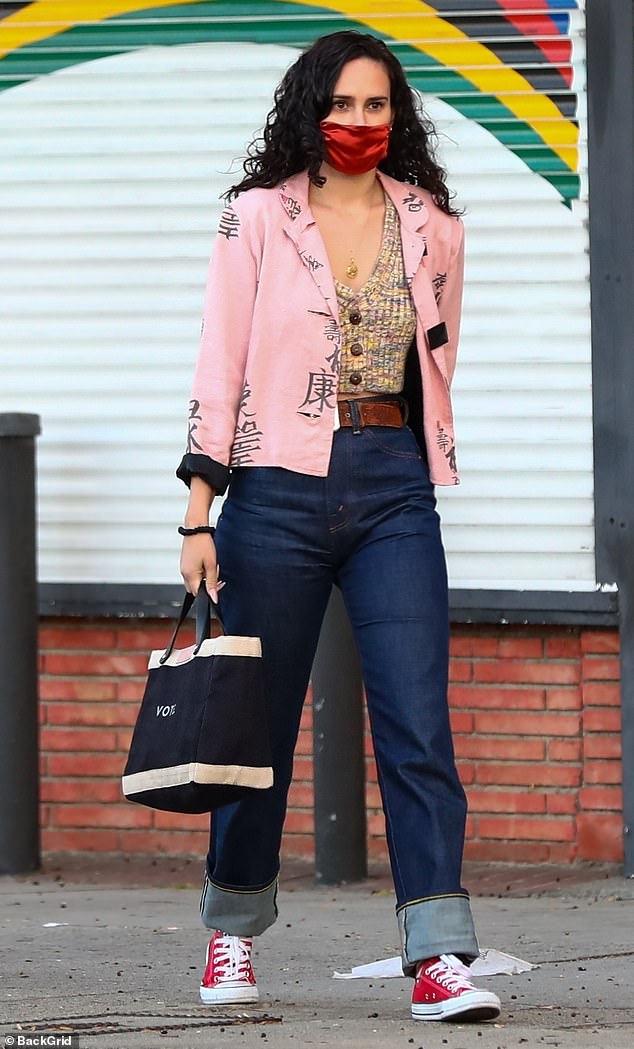 Rumer Willis had been using her social media platforms to urge her fellow citizens to get out and vote in last week’s elections.

Now, just two days after the Democratic nominees were officially declared the winners, the actress stepped out carrying a ‘vote’ tote while out taking care of errands around Los Angeles.

On the go: Rumer Willis stepped out on an errand run carrying a ‘vote’ tote, two days after Joe Biden and Kamala Harris were declared the winners of the 2020 president election

The daughter of screen legends Bruce Willis and Demi Moore rocked a slight 1950s retro look in blue denim jeans, that were cuffed at the bottom, and a pink and black jacket.

Willis, 32, styled her raven tresses long and flowing, with plenty of curls, and a part on the slight left. 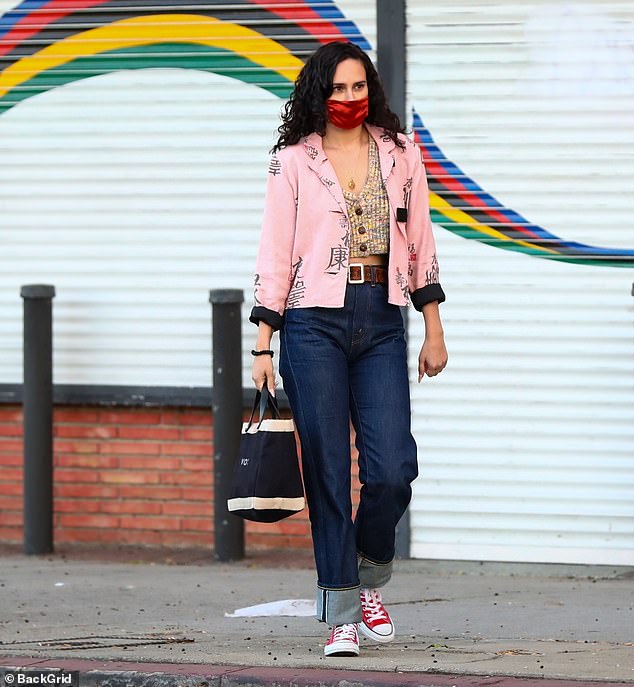 Stylish: The actress, 32, rocked a slight 1950s retro look in blue denim jeans that were cuffed at the bottom with a pink and black jacket and red Coverse sneakers

The season 20 winner of Dancing with the Stars made sure to wear a red protective mask over her mouth and nose, in accordance to health and safety protocols amid the COVID-19 pandemic.

On Saturday, as many people celebrated the Biden-Harris win in the streets all across the U.S.,  Willis took to Instagram and shared her enthusiastic emotions, along with a photo of the President-Elect and Vice President-Elect. 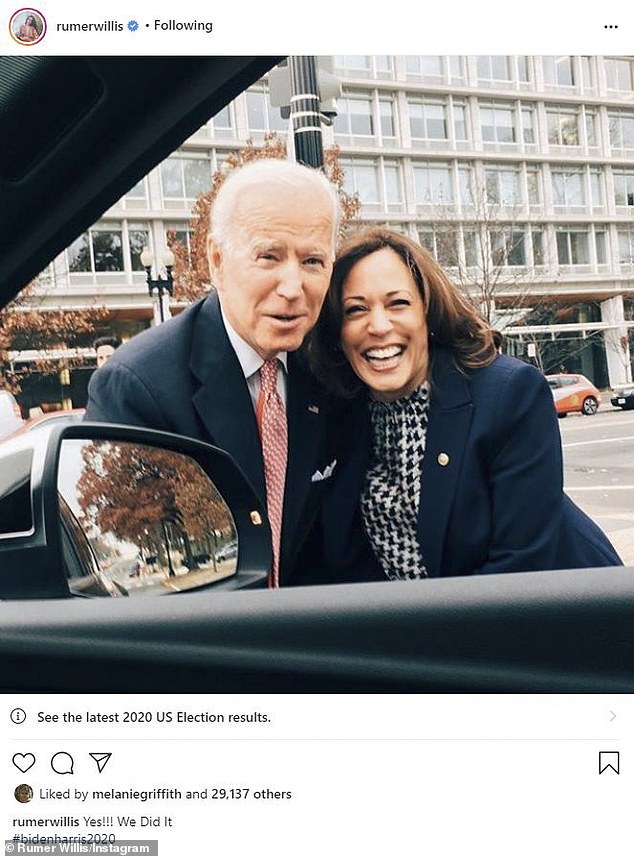 ‘Yes!!!”: Willis shared in the celebration of Joe Biden and Kamala Harris being decalred the winners of the 2020 presidential election on Saturday 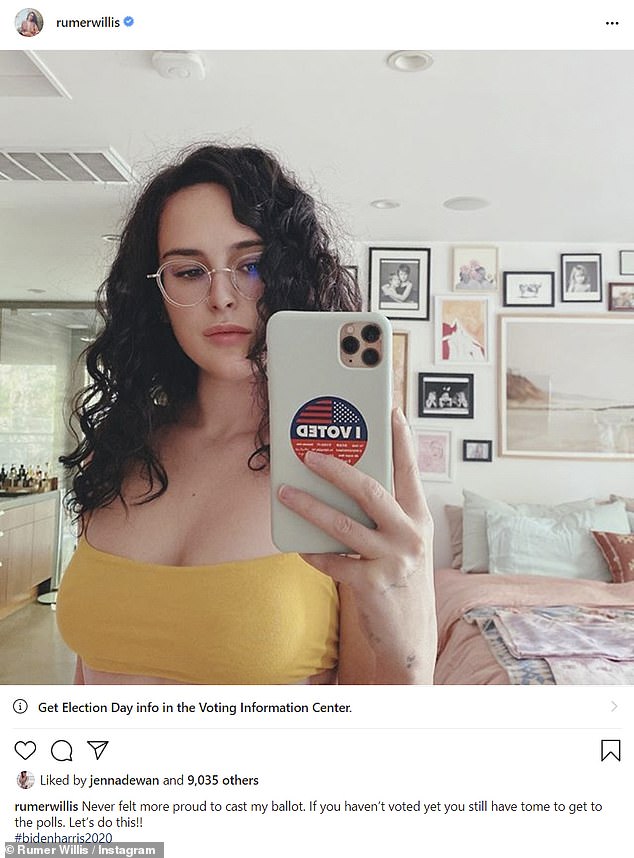 Civic duty: The season 20 winner of Dancing With The Stars showed off her cleavage in a gold crop top when she announced she had voted and urged her fans to follow suit

Four days earlier, on election day, Willis gave one last push to her 849,000 fans and followers to head out to the polls to vote.

‘Never felt more proud to cast my ballot. If you haven’t voted yet you still have tome to get to the polls. Let’s do this!! #bidenharris2020,’ she wrote in the caption of a photo showing her in a gold crop top.

Willis is the oldest of five sisters that includes Scout, 29, and Tallulah, 26. They also has two half-sisters Mabel, eight, and Evelyn, six, from father Bruce Willis’ current marriage to Emma Heming. 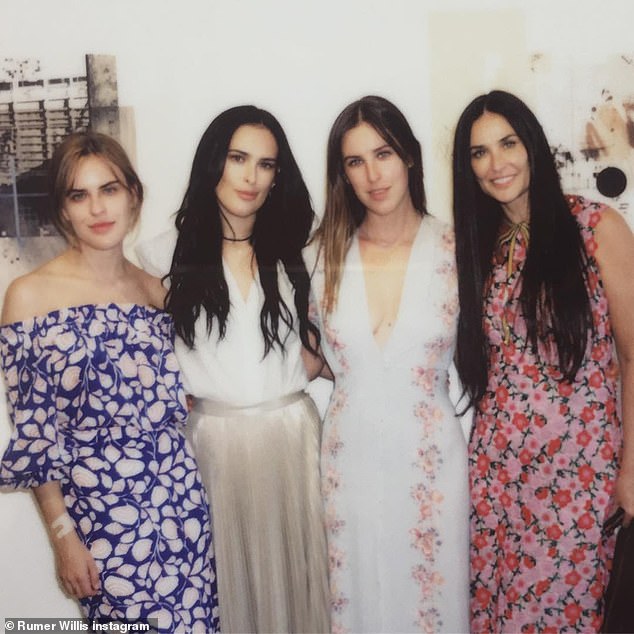 Family love; The actress is the oldest of five sisters; she is pictured with Tallulah, 26, and Scout, 29, and their mother and Hollywood star Demi Moore