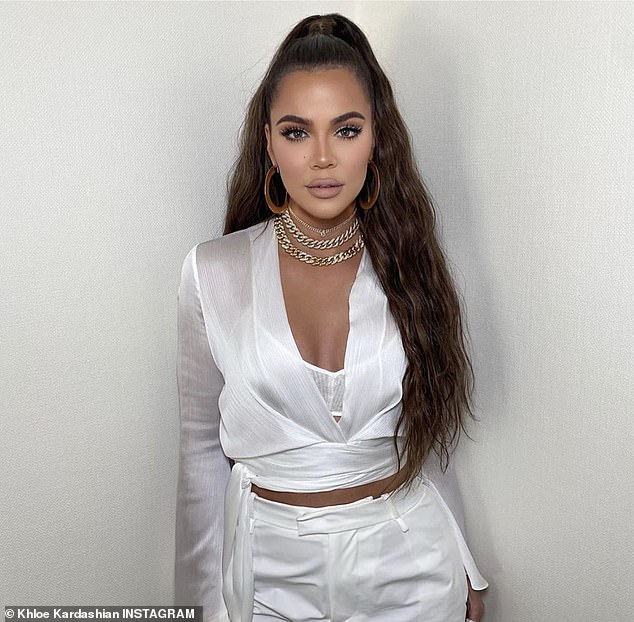 They’re known for throwing a spectacular holiday party every year.

And Khloe Kardashian has made it clear that her family intend on getting together this Christmas to celebrate, even if it has to be a smaller bash due to the Coronavirus pandemic.

However the reality star, 36, has now been slammed by fans on Twitter, with some calling her ‘selfish’ and ‘out of touch’, for suggesting that the Kardashian and Jenner brood may get ‘rapid’ tests before she hosts the event.

Christmas plans: Khloe Kardashian has been slammed by some fans online for suggesting she will use rapid coronavirus testing to ensure her family can celebrate Christmas together

Khloe sparked the furore after replying to another fans comment about whether the party would be cancelled.

‘OMG i just realized….. is the Kardash/Jenner Christmas party getting cancelled this year ????’ the Kardashian fan wrote on Twitter.

‘I pray not! I think it will have to be way smaller obviously. And I’m totally fine with that! But we’re definitely celebrating Christmas!’ the mother-of-one replied.

Khloe added, ‘It will just have to be small and safe. Maybe do rapid testing before We have to think of what is safest’ 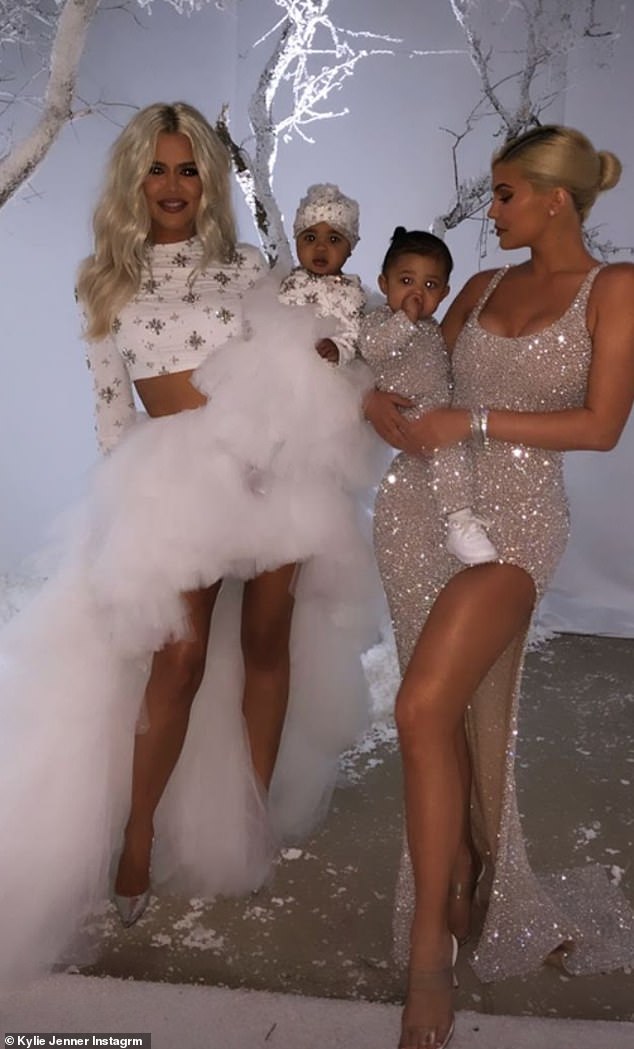 Party like it’s 2018: The reality star, 36, told her followers that she’s still planning a bash even if the family have to get tests and keep it smaller than usual (pictured with sister Kylie and their children at the luxury party in 2018) 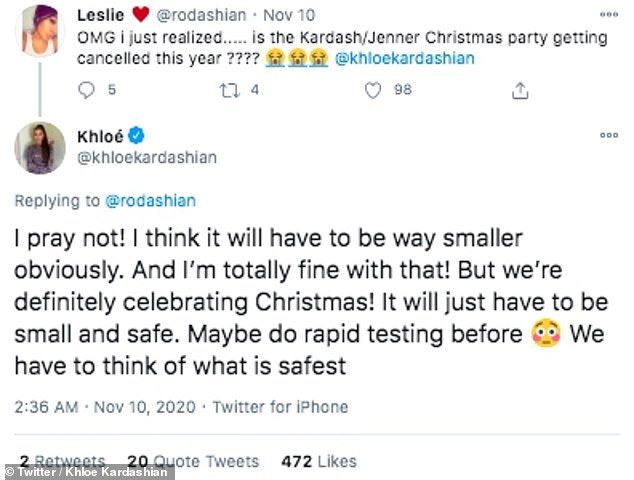 Staying safe: The reality star, 36, said the family may do ‘rapid testing’ to ensure the different households can all gather to mark the holidays

Some followers were unimpressed with the star’s plan to use rapid testing and risk a large gathering in the current global climate.

One person wrote: ‘Why is it so hard for y’all to just stay home. Not the end of the world to not have a party.’

And another added: ‘Haha I love you, but you’re so out of touch. Thinking of what is safest is maybe sticking to JUST family or maybe not have it at all?’

While someone else penned: ‘I love ya Khlo but is that the best use of the tests we have? So you can party? Just keep it to family. We are all making sacrifices this year.’ 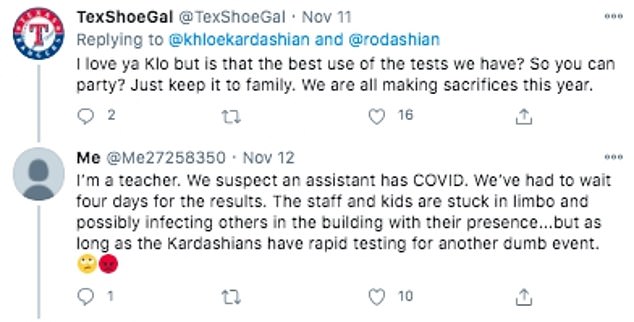 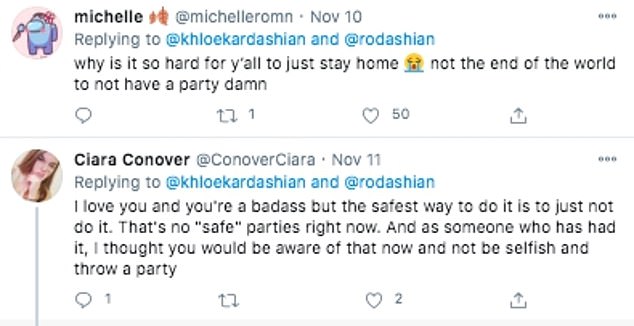 Opinions: Dozens of people replied to Khloe’s tweet to share their thoughts on whether she should hold the party, with some saying she was ‘out of touch’ to consider it

And another Twitter user, who identified themselves as a physician added: ‘Maybe you can skip the Xmas party and donate those tests to my sick patients?’

Despite the backlash, some fans said Khloe should go ahead with her festive plans and not worry about the opinions being aired online.

‘I’m sorry for any backlash you and you’re family are facing due to trying to love as normally as possible. You are doing everything right with testing and such.

‘People are just envious, keep killing them with kindness and class like you do,’ wrote one supportive follower. 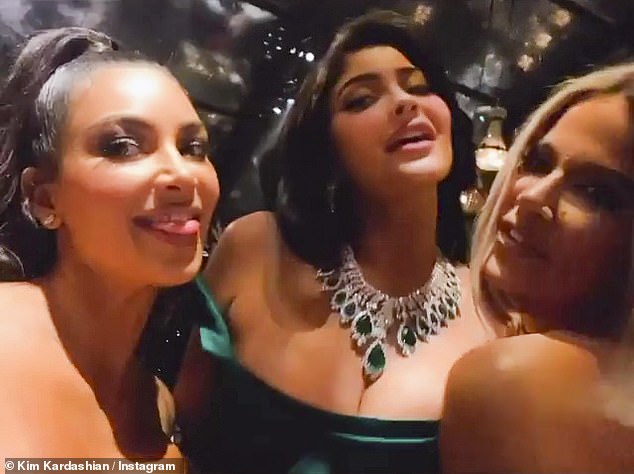 2019: The family’s annual party usually sees dozens of friends and family members come to celebrate the festive season at one of the Kardashian-Jenner homes decked out in an extravagant way; Kim, Kylie and Khloe

The family’s annual party usually sees dozens of friends and family members come to celebrate the festive season at one of the Kardashian-Jenner homes decked out in an extravagant way.

Last year Kourtney took over hosting the party; in 2018 it took place at Kim and Kanye’s house. Before that, it was traditionally held at Kris’ mansion.

It comes after Khloe’s sister Kim got backlash for flying dozens of her friends to a private island in Polynesia last month to celebrate her 40th birthday.

‘We danced, rode bikes, swam near whales, kayaked, watched a movie on the beach and so much more,’ she revealed in social media posts at the time and added that everyone was screened for COVID-19 and quarantined before the trip. 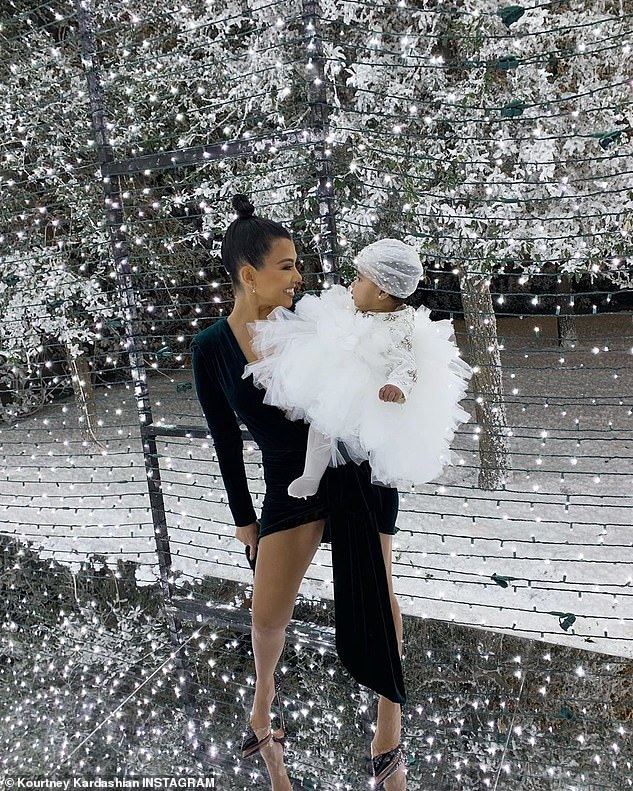 ‘I realize that for most people, this is something that is so far out of reach right now, so in moments like these, I am humbly reminded of how privileged my life is.’ she wrote.

Just days later, Kendall Jenner was criticized for celebrating her 25th birthday with a costume party in West Hollywood over Halloween weekend.

Matriarch Kris defended her daughters, telling Andy Cohen, ‘We are really responsible, and we make sure that everyone in our family and our closest friends are tested religiously. You know, we do what we can. We try to follow the rules.’ 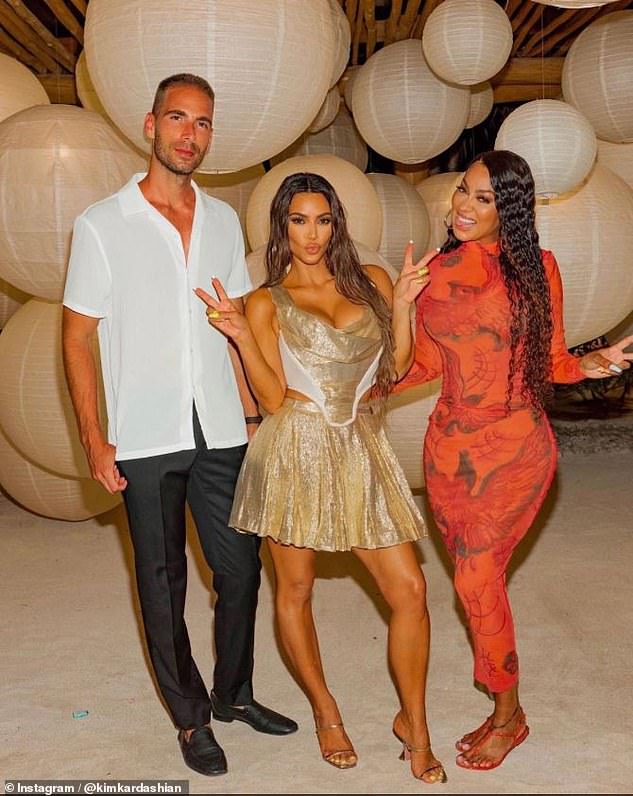 Golden girl: Kim got backlash for flying dozens of her friends to a private island in Polynesia last month to celebrate her 40th birthday