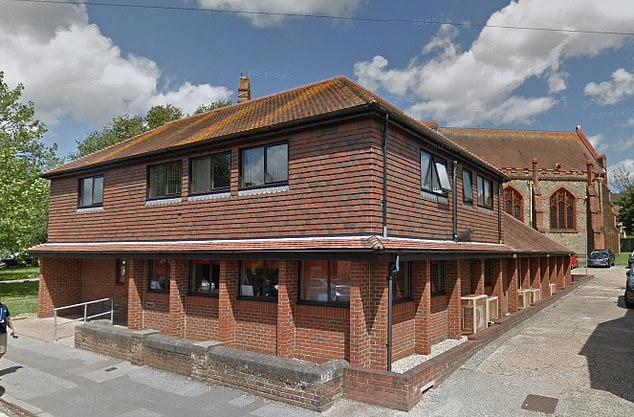 A doctor’s surgery has been forced to shut after eight of its 29 staff tested positive for COVID-19 days after up to 300 patients had their winter flu jabs.

The New Surgery in Folkestone, Kent, closed its doors last Monday due to ‘staff sickness’ and confirmed eight had tested positive for coronavirus four days later.

Worried patients who had their annual flu jabs recently claimed they were not contacted by the surgery or asked to self-isolate despite the risk.

The outbreak means 27 per cent of the 29 staff have the killer contagious bug.

The New Surgery in Folkestone, Kent, closed its doors last Monday due to ‘staff sickness’ and confirmed they had tested positive for coronavirus four days later.

Locals blasted the surgery for not doing more to protect its patients following the outbreak. Just the week before up to 300 people are believed to have visited the clinic for a flu jab.

Michelle Robinson said: ‘What about people that have had their flu jabs in the surgery the week before they closed.

‘High risk patients that they haven’t bothered to contact. Disgusting.’

Jacqueline Kennedy added: ‘Why not say the day it closed. Ridiculous.’

Vicky Snelling said: ‘Mum had a call from the doctor today profusely apologising about the palaver.’ 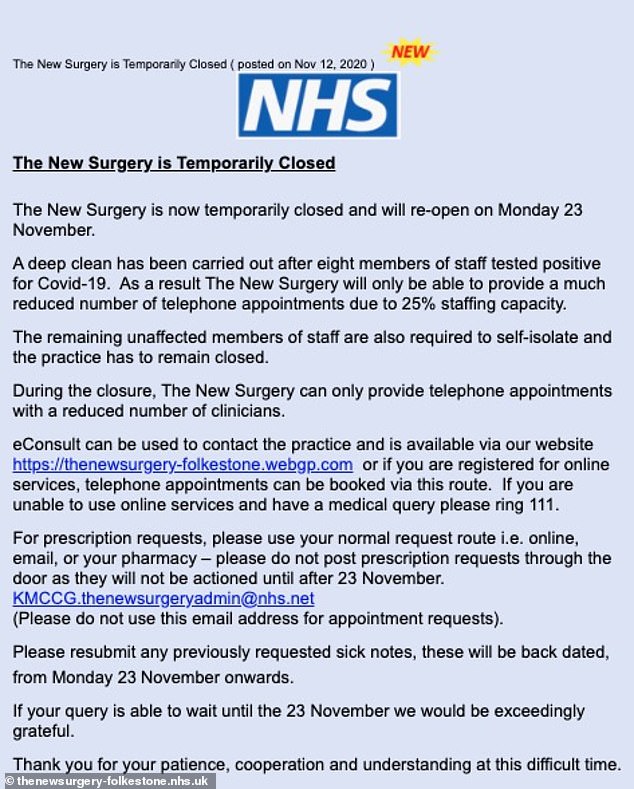 Locals blasted the surgery for not doing more to protect its patients following the outbreak. Just the week before up to 300 people are believed to have visited the clinic for a flu jab. Pictured, a post on the surgery’s Facebook page

A source said: ‘Any of the 11,000 patients calling the surgery just heard an answerphone message telling them to call 111.

‘On the previous Saturday the surgery held a flu jab clinic and it’s thought between 200 and 300 people attended.

‘This week patients have been getting increasingly concerned and frustrated about the closure.

‘Patients who went for a flu jab are furious they still haven’t been contacted.’

On Monday, the surgery said on its website: ‘Due to staff sickness, we regret that we are closed currently.

But on Thursday it updated the announcement and said: ‘The New Surgery is now temporarily closed and will reopen on Monday, November 23.

‘A deep clean has been carried out after eight members of staff tested positive for Covid-19. 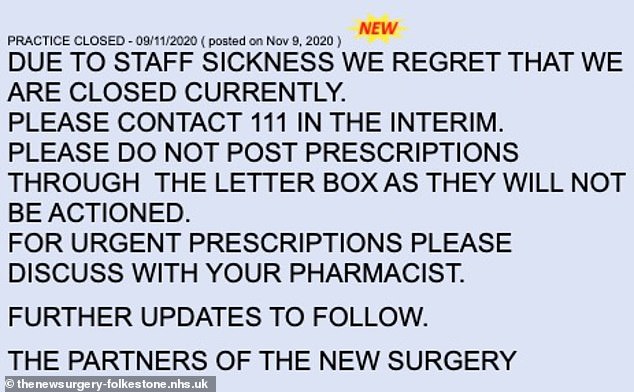 Worried patients who had their annual flu jabs recently claimed they were not contacted by the surgery or asked to self-isolate despite the risk. Pictured, the surgery only revealed it had closed for ‘staff sickness’ at first

‘As a result The New Surgery will only be able to provide a much reduced number of telephone appointments due to 25 per cent staffing capacity.

‘The remaining unaffected members of staff are also required to self-isolate and the practice has to remain closed.

‘During the closure, The New Surgery can only provide telephone appointments with a reduced number of clinicians.

‘Thank you for your patience, cooperation and understanding at this difficult time.’

In addition, staff and patients were using hand sanitiser. It also said it didn’t want the outbreak to put people off getting their flu vaccine.

A spokesman said: ‘None of the clinicians giving patients’ vaccines have tested positive for Covid-19.

‘All staff involved in the clinic used PPE, patients wore face covering and social distancing was in place to maintain patient and staff safety. PHE has confirmed the risk to patients is minimal.’

Dr Richard Dawood, the leading GP at The Fleet Street Clinic in London, told MailOnline ‘there is never any room for complacency’ when delivering vaccines.

He added: ‘Delivering large numbers of vaccine doses safely is a big challenge, and one that we really need to get on top of.

‘We need to treat this year’s winter flu programme as a dry run for a the much larger challenge of rolling out a coronavirus vaccine programme, delivering two doses of vaccine to the entire UK population.

‘At the Fleet Street Clinic, we vaccinate thousands of people against flu every year, either in their workplace or at our own clinic in central London.

‘Whereas previously we used to run this as a “walk-in” service, with no appointment necessary, we use a self-service web tool to space out appointments during the day, with only small numbers of patients arriving in a steady stream, coming in to a separate area of the practice.

‘We use PPE and enhanced cleaning regime. We also have our own testing resources so can react quickly to any concerns or symptoms among our staff. But there is never any room for complacency.’

MailOnline has contacted The New Surgery and the British Medical Association for comment.