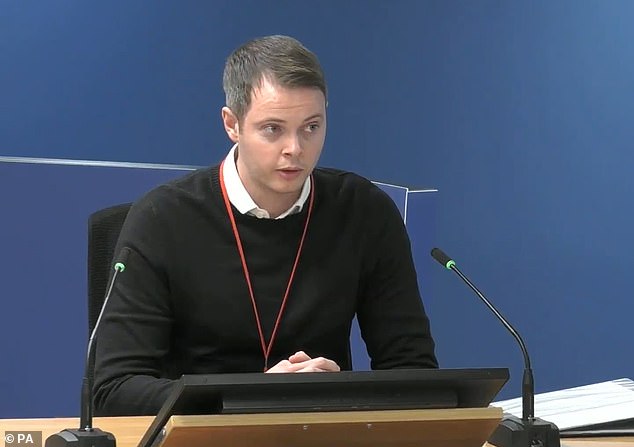 A former employee of the firm responsible for the flammable insulation used on Grenfell Tower claimed the manufacturers erroneously marketed the combustible foam boards as being safe, the inquiry has heard.

Jonathan Roper, who worked as an assistant product manager for Celotex, said the firm had been ‘dishonest’ by ‘overengineering’ a cladding fire safety test to achieve a pass for its Rs5000 insulation product after a first test failure in January 2014.

In May 2014, the firm used a second system pass to erroneously market the insulation as being safe for use on high-rise buildings.

Mr Roper said the company’s actions were ‘completely unethical’ and he had not considered the impact of their decisions at the time.

Jonathan Roper, who worked as an assistant product manager for Celotex, said the firm used a a second system pass to erroneously market the insulation as being safe for use on high-rise buildings

On Monday, the inquiry heard Celotex added a 6mm fire-resisting magnesium oxide board to a cladding test rig made up of 12mm fibre cement panels for the second test.

The inquiry heard 8mm fibre cement panels were added over the magnesium oxide to ‘conceal’ its presence, making the whole system almost flush – but for the 2mm difference.

Mr Roper agreed with the inquiry’s chief lawyer Richard Millett QC that the decision to use ‘a thinner layer was to make it less noticeable there was something else behind it’, which would aid to ‘see off any prospect of anyone asking questions’, about its make-up.

Mr Millett asked: ‘Did that not strike you at the time as dishonest?’

Mr Roper said: ‘Yes it did.

‘I went along with a lot of actions at Celotex that, looking back on reflection, were completely unethical and that I probably didn’t potentially consider the impact of at the time.

‘I was 22 or 23, first job, I thought this was standard practice albeit it did sit very uncomfortably with me.’

Business studies graduate Mr Roper said his superiors ordered the removal of any mention of the magnesium oxide in marketing literature, which he agreed was ‘misleading and intended to mislead’.

Mr Millett asked: ‘Did you realise at the time that if this was how the test was to be described to the market it would be a fraud on the market?’

Mr Roper said there was no-one in the firm he could tell about his concerns.

He told the inquiry that all his work was overseen by product manager Paul Evans, and that the motivation for getting the Rs5000 product to market was to compete with rival firm Kingspan and its K15 insulation.

The inquiry has previously heard Celotex saw Grenfell as a ‘flagship’ for its product and cynically exploited the ‘smoke of confusion’ which surrounded building regulations at the time.

Celotex, part of the French multinational Saint-Gobain group, has maintained it promoted Rs5000’s use on buildings taller than 18m only on a ‘rainscreen cladding system with the specific components’, used when it passed the fire safety test. 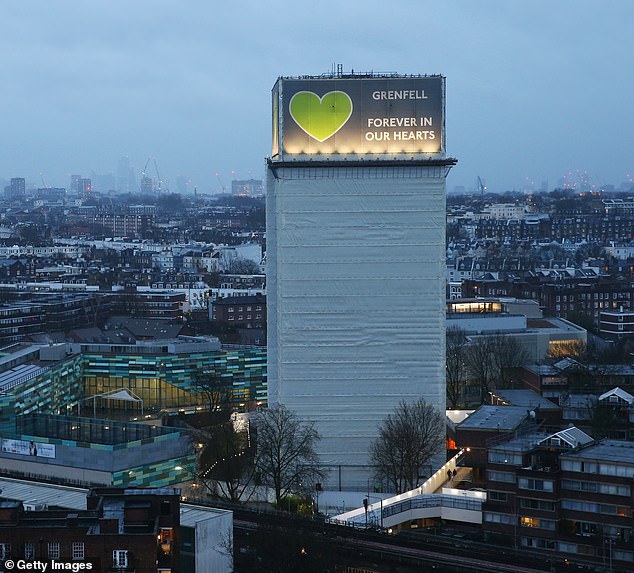 In its opening statement for module two of the inquiry, the firm said: ‘In the course of investigations carried out by Celotex after the Grenfell Tower fire, certain issues emerged concerning the testing, certification and marketing of Celotex’s products.

‘These matters involved unacceptable conduct on the part of a number of employees.’

Module two, the latest stage in the inquiry, is scrutinising the production, testing and sale of the materials used in the tower’s revamp which resulted in the June 2017 fire.

Seventy-two people died as a result of the fire at the 24-storey tower when an electrical fault in a fridge-freezer sparked a catastrophic blaze which was fuelled by the building’s flammable cladding system.