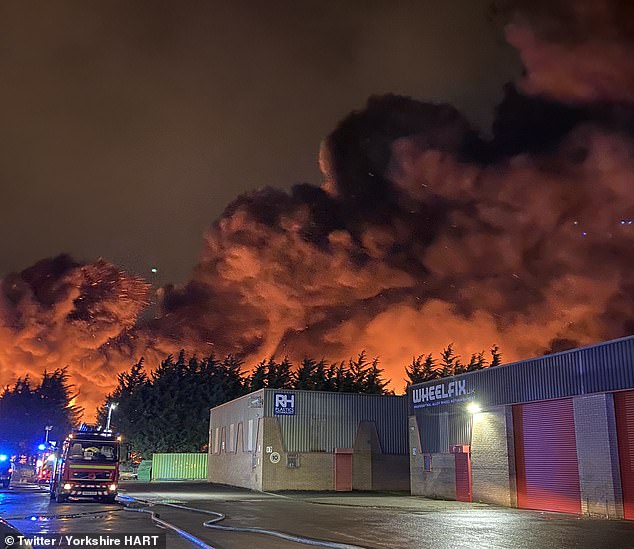 Chaos in Bradford as hundreds of firefighters tackle huge blaze at go-kart track that had been probed for ‘illegally’ storing 50,000 tyres with schools forced to close and rail services cancelled

A huge fire has exploded this morning at the site of a former go-kart track, which had been under investigation by the Environment Agency over a mountain of 50,000 waste tyres.

The blaze in East Bowling, Bradford, West Yorks, forced schools to be closed and threw road and rail travel into chaos as plumes of black smoke engulfed the area.

A hundred firefighters and 15 engines are on the site trying to bring it down under control, but all people expected there are accounted for.

It started just before 3.09am, sparking desperate calls to the 999 services, who rushed to the scene to tackle the disaster.

Bronte Girls Academy, Rainbow Primary and Dixons City Academy were all shut by the council and train services in to the nearby Bradford Interchange cancelled.

Families living nearby were told to keep their windows closed to protect them from the potentially dangerous smoke being breathed in.

The site – which had previously been home to Ontrak Karting – but the business had left the land.

After they left the space was put under investigation by the Environment Agency over the ‘illegal storage of waste tyres’. There is no suggestion Ontrak were being investigated. 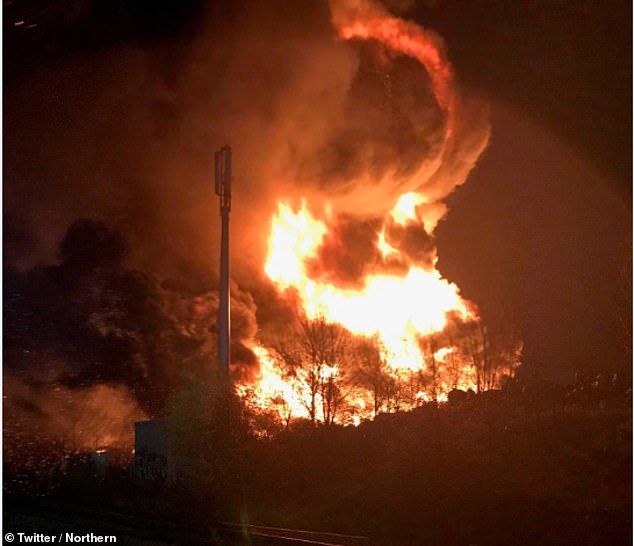 The huge fire started around 3am this morning in East Bowling area of Bradford, West Yorks 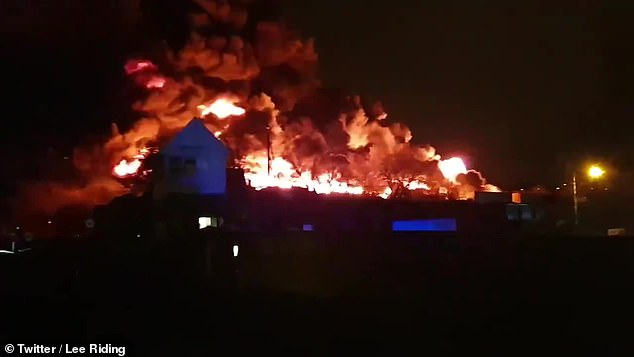 The site had previously been the home of Ontrak Karting, but they are no longer based there 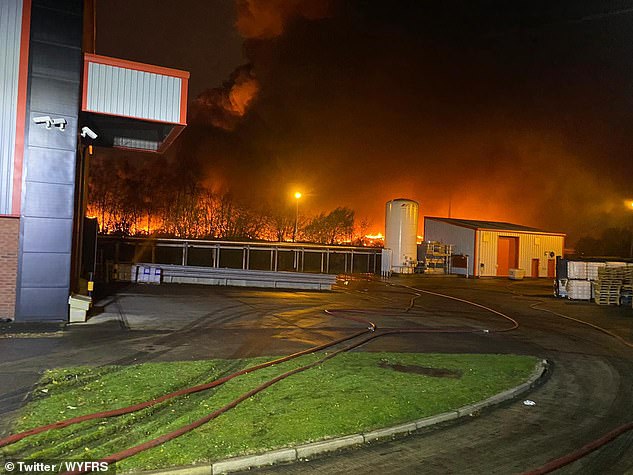 A spokesperson for agency said in July this year: “Our officers are investigating the operators of a site on Spring Mill Street, Bradford following reports to our Incident Hotline about the suspected illegal storage of waste tyres.

“There are strict rules governing the storage of waste tyres, which are designed to help prevent fires and to protect people and the environment. We have alerted our colleagues at West Yorkshire Fire & Rescue Service and are now seeking to determine if an offence has been committed so that appropriate enforcement action may be taken.”

MailOnline have contact the authority to see if they are currently involved in the fire and what happened to their initial investigation.

The then owner of the site Jak Yaqoob, of the neighbouring Car Empire business, insisted the new tenant was doing nothing wrong. 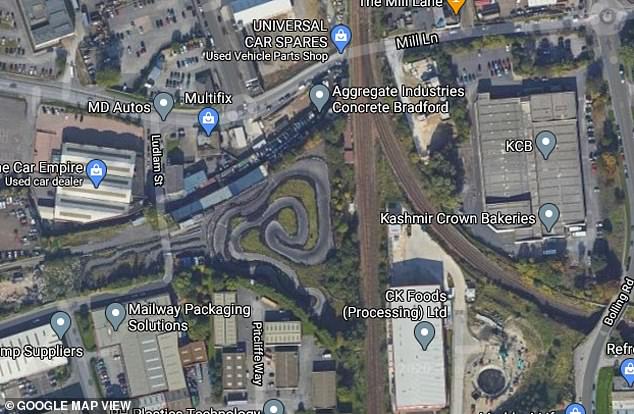 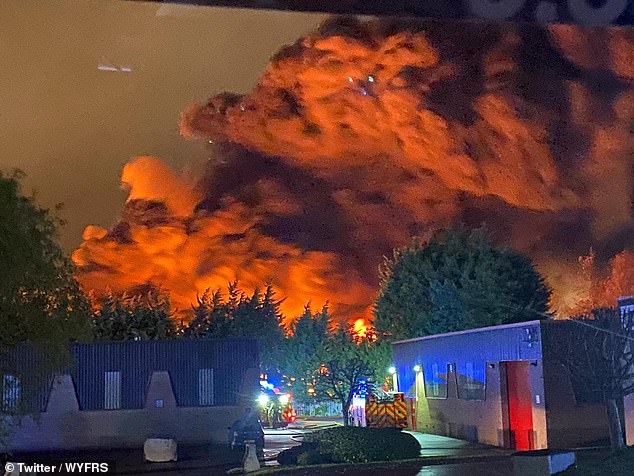 Roads, rail stops and schools have all been closed by the huge fire, which started earlier today 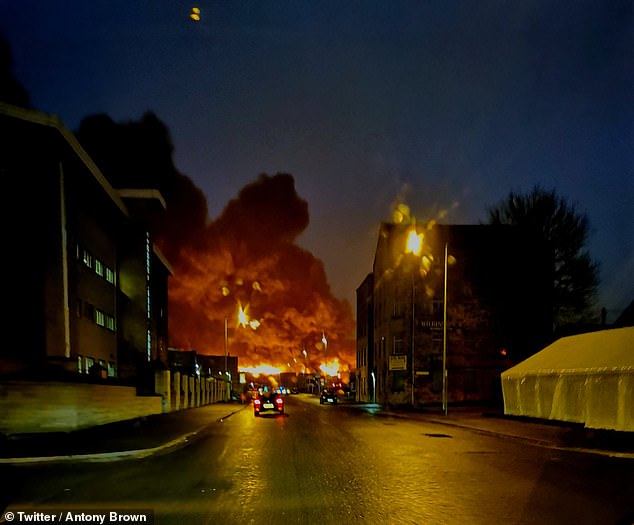 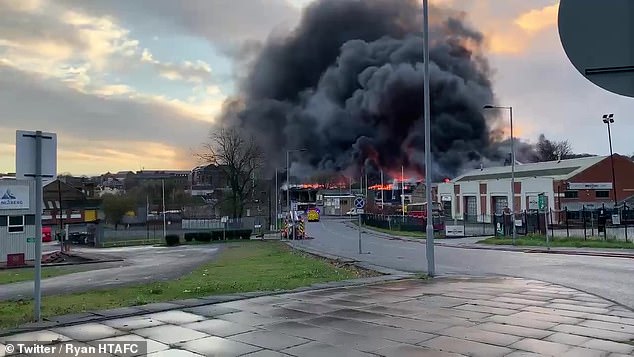 He told the Telegraph and Argus at the time he had agreed a rent free period if they cleared the 50,000 tyres. It is thought 8,000 were still there.

Mr Yaqoob said: “There’s nothing illegal going on any of my sites. What they are doing here is roping the tyres into bundles so they can be taken away. Nobody is bringing tyres on to the site.”

West Yorkshire Fire Service said it expected there to be a problem in the area for a number of further hours.

A spokeswoman told MailOnline: ‘Due to the large amount of smoke, we’re advising all residents in the vicinity to the east of the incident – the East Bowling Area – to please keep windows and doors shut.

‘We are also asking people to avoid travelling through this area.

‘There are diversions and cancellations on the trains between Leeds, Bradford and Halifax and passengers who have to travel today are advised to check the details of their journey with Northern before they do.’

The Environment Agency have been approached for comment. West Yorkshire Police said it was assisting with road closures.